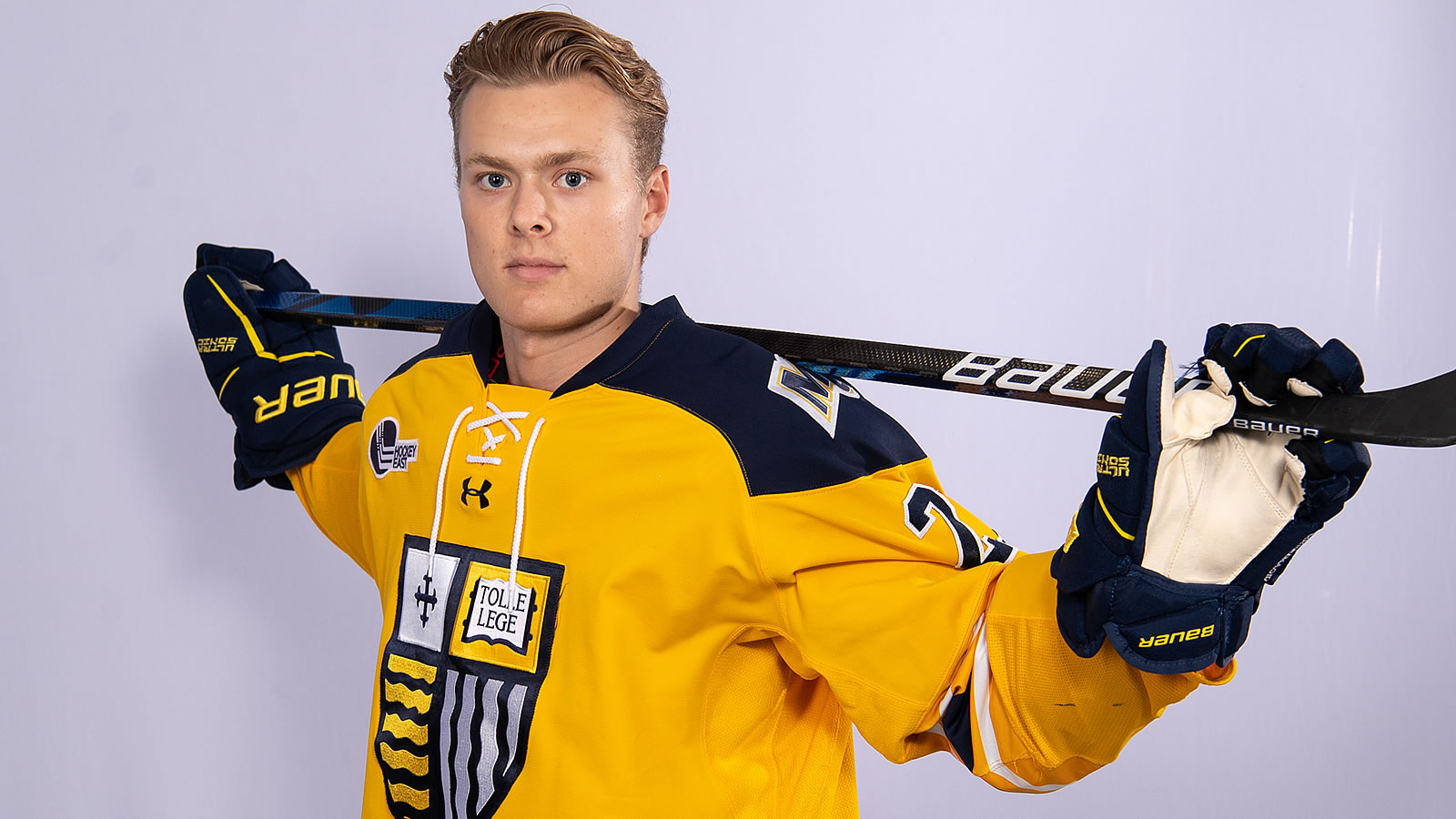 NORTH ANDOVER, Mass. - Momentum started to build in the second period of the Merrimack College men's hockey team's matchup against #16/RV Boston University, and it did not let it die down, as the Warriors came back to knock off the Terriers, 3-2, Friday night at Lawler Rink.

The Warriors got contributions from all over their lineup, led by goals from Alex Jefferies, Jake Durflinger and Adam Arvedson. After the Terriers scored 16 minutes into the second period, Durflinger got Merrimack back to level just under three minutes after that, then Arvedson netted the game-winner in the third.

It marks the first ranked win of the season for the Warriors and the first time they've knocked off Boston University at Lawler Rink since Oct. 20, 2018.

- The sides played a tight opening 20 minutes with just 11 combined shots, but Merrimack was still able to get on the board. Max Newton started the scoring play midway through the frame when he made a great play to knock a puck free off a Terrier defender in the attacking end. He then fed a streaking Jefferies in the slot, who slipped home his first of the campaign through the five-hole of BU goalie, Drew Commesso.

- Boston University went on the power play a few minutes later and converted to deadlock the teams at one after 20 minutes.

- Merrimack came alive in the second period and fired 18 shots on net, including a trio apiece from Logan Drevitch and Zach Uens. The visitors still found a way to grab the lead exactly 16 minutes into the second, but it did not last long.

- The Warriors quickly went on the comeback trail and equalized the game 2:41 later. Steven Jandric knocked a puck free in the defensive zone, then bumped it to the middle of the ice where Durflinger picked it up with speed. The graduate student came in all alone and sniped the top corner to knot the game at two.

- Merrimack pressed for the lead early on in the third period and were rewarded. With less than 14 minutes to play in regulation, Uens pinched in from the left point and won a puck battle. He worked a puck towards the corner to Matt Copponi, who skated to space near the left point, then slid a pass over to Arvedson, who unloaded a one-timer that clipped the top of the net for the freshman's first collegiate tally.

- Boston University looked to tie the game up again in the closing 13 minutes, but the Warrior defense shut them down and only allowed six shots the entire period to claim the victory.

- The assist marked the first career point for Copponi.

- Newton is now on a four-game point streak that includes four goals, three assists and seven points during the stretch.

- Uens topped all skaters with a +2 rating.

- Liam Walsh had four blocked shots to lead all Warriors.

- Zachary Borgiel got the start in net and won his second straight third straight outing with 18 saves. He also made a key breakaway save in the second period to keep the game tied at the time.

The teams move to Boston and Agganis Arena Saturday night to conclude the weekend set. Start time is set for 7:00 pm.