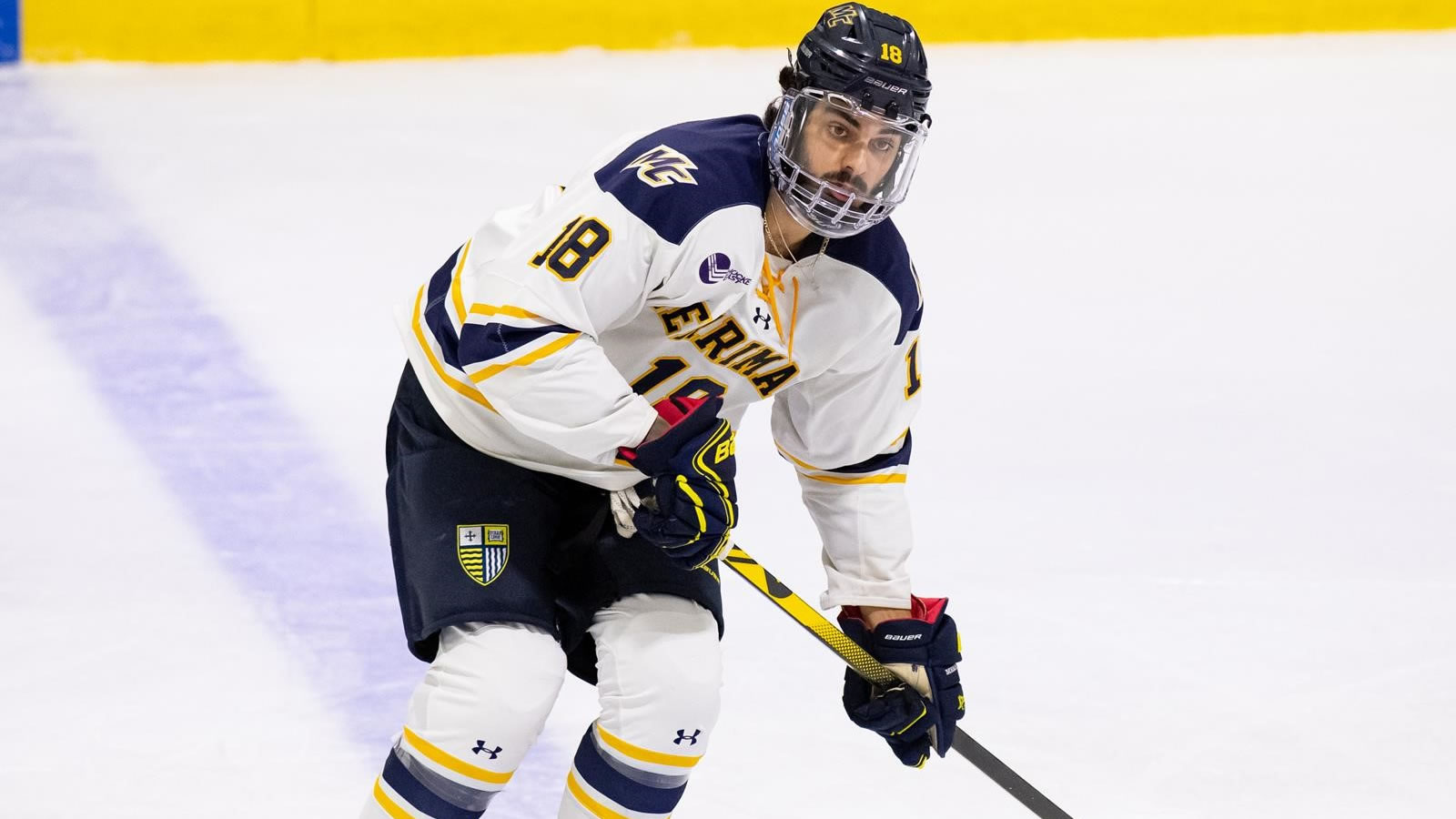 HAMILTON, N.Y. - After it trailed by two goals after 40 minutes of play, the Merrimack College men's hockey team took control in the third period with four unanswered goals to knock off previously undefeated Colgate, 5-3, Saturday night at Class of 1965 Arena.

Liam Walsh got Merrimack to within one just under five minutes into the third, then Ben Brar tied the game on the power play midway through the frame. It set the stage for Max Newton, who scored his second of the game and third of the weekend in the final six minutes for the game-winner.

Newton topped the team with three points to push his weekend total to four, which also stakes him to the team lead in the category. Brar also put an end to a great offensive series, as he totaled three points against the Raiders.

- The Warriors found themselves down by a goal early on, as Colgate go on the board just after a minute into the game. Merrimack had chances to tie, including a great chance late in the period for Logan Drevitch, but it just missed.

- Merrimack fell victim to another goal early on in the period, as the Raiders struck again in the first two minutes of the second period to take a two-goal lead, but the Warriors got it back.

- After a pair of penalties, Merrimack received 33 seconds of 5-on-3 power play time just a few minutes into the frame. The two-man advantage went by the boards, but Newton got Merrimack on the board when he benefited from a strange bounce off his shot that eluded the netminder for the graduate student's second goal of the weekend. Zach Uens picked up the primary assist after he held the puck in the zone and Declan Carlile also factored into the scoring with an assist.

- Merrimack poured it on with myriad chances from in-tight, but it could not break through and Colgate converted on a late period power play to take a two-goal lead into the third period. The Warriors came out with something to prove in the third period and it quickly yielded dividends. Just under five minutes in, Filip Forsmark made a tremendous play behind the Colgate net to knock a puck free, then quickly slid a pass to Walsh in front, who fired it home.

- Merrimack's siege continued six minutes later on another power play. Steven Jandric cut in from the near faceoff dot for a shot that was blocked, then his follow up chance was saved, but Brar was in the perfect spot at the top of the crease to stuff it home to tie the game at three.

- Only four minutes were needed after that for Merrimack to score the game-winner. Alex Jefferies started the play when he bumped a pass to Jandric in the defensive zone. The graduate student then flew into the zone, drove wide around a defender, and flipped a pass in front to Newton for the finish.

- Colgate was unable to get any great chances on Warrior netminder, Zachary Borgiel, and Brar capped the scoring in the final two minutes with an empty net goal to complete the comeback victory.

- Newton and Brar tied for the team lead with six shots on goal apiece.

- Newton had another sensational game at the faceoff dot with 15 wins on 24 chances.

- Vinnell, Uens and Jefferies all finished with +2 ratings.

- Borgiel made 23 saves to pick up his second win of the season.