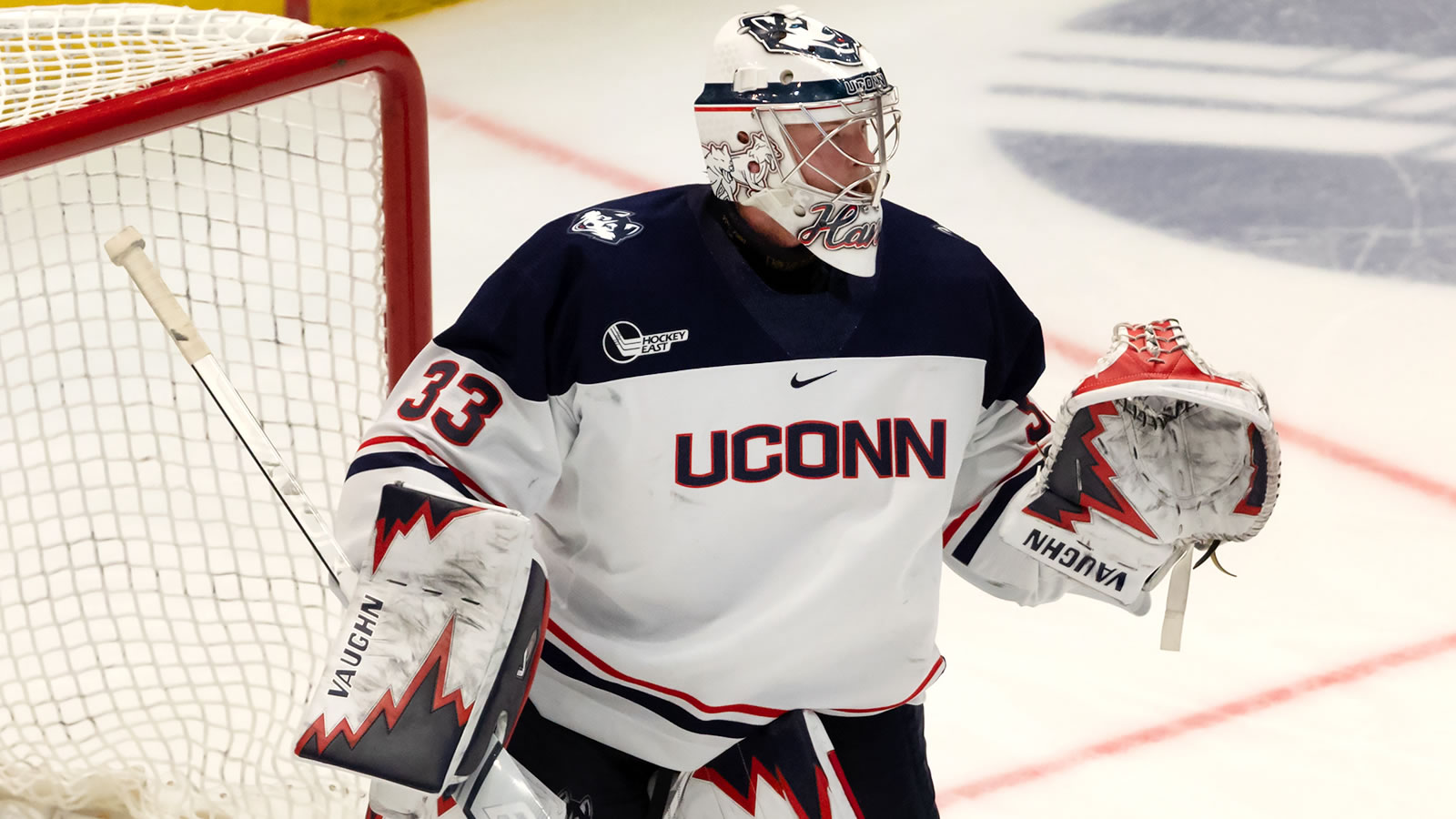 Senior goaltender Darion Hanson made 22 saves for the Huskies
UConn Shut Out By Ohio State, 3-0

COLUMBUS, Ohio - The UConn men's hockey team dropped their weekend series at Ohio State after getting shutout on Saturday afternoon, 3-0 at the Value City Arena at the Schottenstein Center.

The Huskies fall to 2-3-0 on the season with the loss.

Ohio State freshman goaltender Jakub Dobes made 32 saves to earn his first career shutout. The Buckeyes got goals from Patrick Guzzo, Travis Treloar and Tate Singleton in the win.

The Huskies held a 32-25 shot advantage but came up empty on four power play chances. UConn goaltender Darion Hanson made 22 saves in taking the loss.

The two teams skated to a scoreless first period with UConn holding a 12-7 edge on shots. The Huskies came up empty on three power play chances in the first while Ohio State went 0-for-1.

The Buckeyes got the game's first goal at 4:45 in the second period, coming off a face-off win in the UConn zone. Matt Cassidy shoveled a feed to Guzzo cutting to the front of the net where he cleared the defenseman and chipped a backhander past Hanson for a 1-0 lead.

It looked like the Huskies could have found the tying goal with around 8:40 left as Nick Capone (East Haven, Conn.) ripped one that appeared to sneak under the bar but after an official review, the call of no goal on the ice was confirmed.

For the third time in the game, matching minors where assessed and both teams skated 4-on-4 for a full two minutes when a slashing call on Ohio State was followed by a roughing after the whistle call on the Huskies at 10:20. The Buckeyes were able to strike for their second on the game during the stretch as Quinn Preston set up Treloar with a pass out of the right corner and the sophomore buried the one-timer chance from the slot for a 2-0 lead at 12:10.

The Huskies pulled Hanson for the extra skater with just under three minutes to play but Ohio State tacked on an empty net goal by Singleton to ice away the shutout win.

UConn will return to action on Tuesday, October 26 when they are back in Hockey East action with a match-up at Northeastern live on NESN.