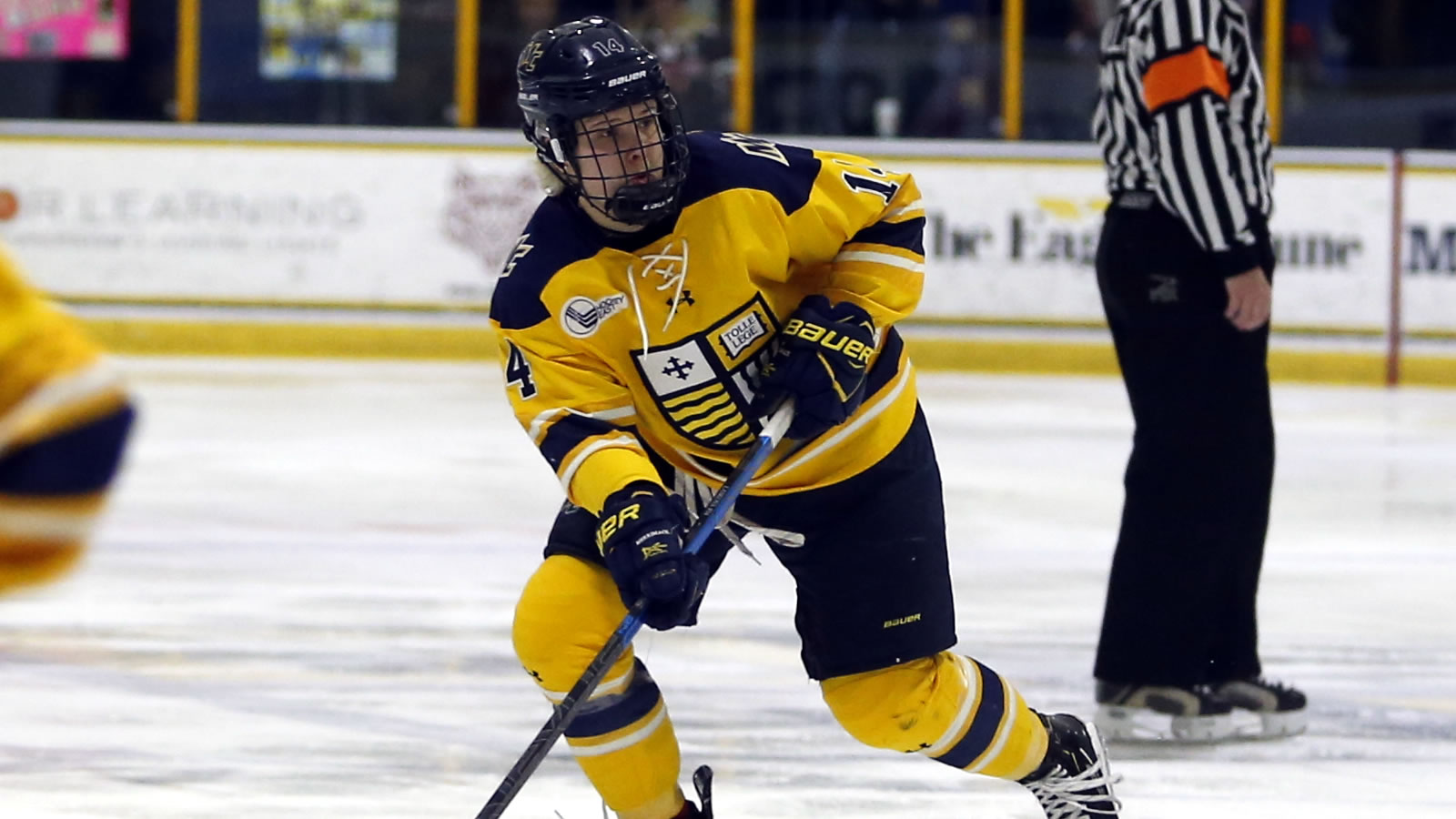 Senior forward Dominika Laskova had a goal and an assist for the Warriors
Merrimack, Boston University Skate to 4-4 Draw; Warriors Earn Extra Point in Shootout

NORTH ANDOVER, Mass.- In an offensive whirlwind at Boston University, the Merrimack women's ice hockey team burst for four goals against the Terriers before closing out a seven round shootout for the extra point on Friday night.

- Merrimack took the game's first lead midway through the first after the Warriors got to the jump from the start of the game. Gabby Jones picked up the puck from a shot wide behind the net and brought it up to the hash marks along the boards. She sent over a crisp pass to defender Raice Szott ready at the point for a one-timer. Szott's shot was saved and pushed out towards the far post, where Katie Kaufman pounced on it for her second goal of the year.

- Teghan Inglis scored her first as a Warrior in style, picking up a puck from the defensive boards and skating end-to-end, cutting past her defensive pressure to fire a rising shot between the glove and post.

- The Terriers worked to get on the board late in the second, but Dominika Laskova made quick work to boost Merrimack's lead once again. Raice Szott stepped up at the blueline to nab a clearing attempt from the boards, cutting into the nearside faceoff circle before popping a short pass for Alexa Pongo along the boards. Pongo sent a pass to a wide-open Laskova waiting in the faceoff circle, beating Stuart with the one-timer. The Terriers responded at the end of the period to once again make it a one goal game.

- Inglis added her second of the night on the power play in the third period. Managing the points, Inglis and Julia MacLean worked back-and-forth to move the Terriers' defensive box shorthanded. With skaters edged towards MacLean, Inglis jumped all over the open lane, ripping a shot inside for a two goal Warriors lead.

- BU responded late, scoring within the minute of the Warriors' fourth goal before tying the game within the final five minutes of the contest. Even with an overtime power play, teams remained scoreless in extra time. The contest would end in a tie for records, but teams would continue into a shootout for the second point in the Hockey East standings.

- The shootout required seven rounds-with Katie Kaufman burying a wrist shot in the fourth round for the first goal by either team in the shootout. After the Terriers potted one, Courtney Maud would tally the difference-maker. In the seventh round, the captain roofed a hard, rising shot bar down for the point.

- The tie is the fifth all-time between the Warriors and Terriers and is the highest for Merrimack against any opponent in program history.

- The shootout against the Terriers is the first ever in Merrimack program history.

The Warriors finish the weekend at the University of Connecticut on Sunday, October 17 with puck drop in Storrs set for 3 p.m.