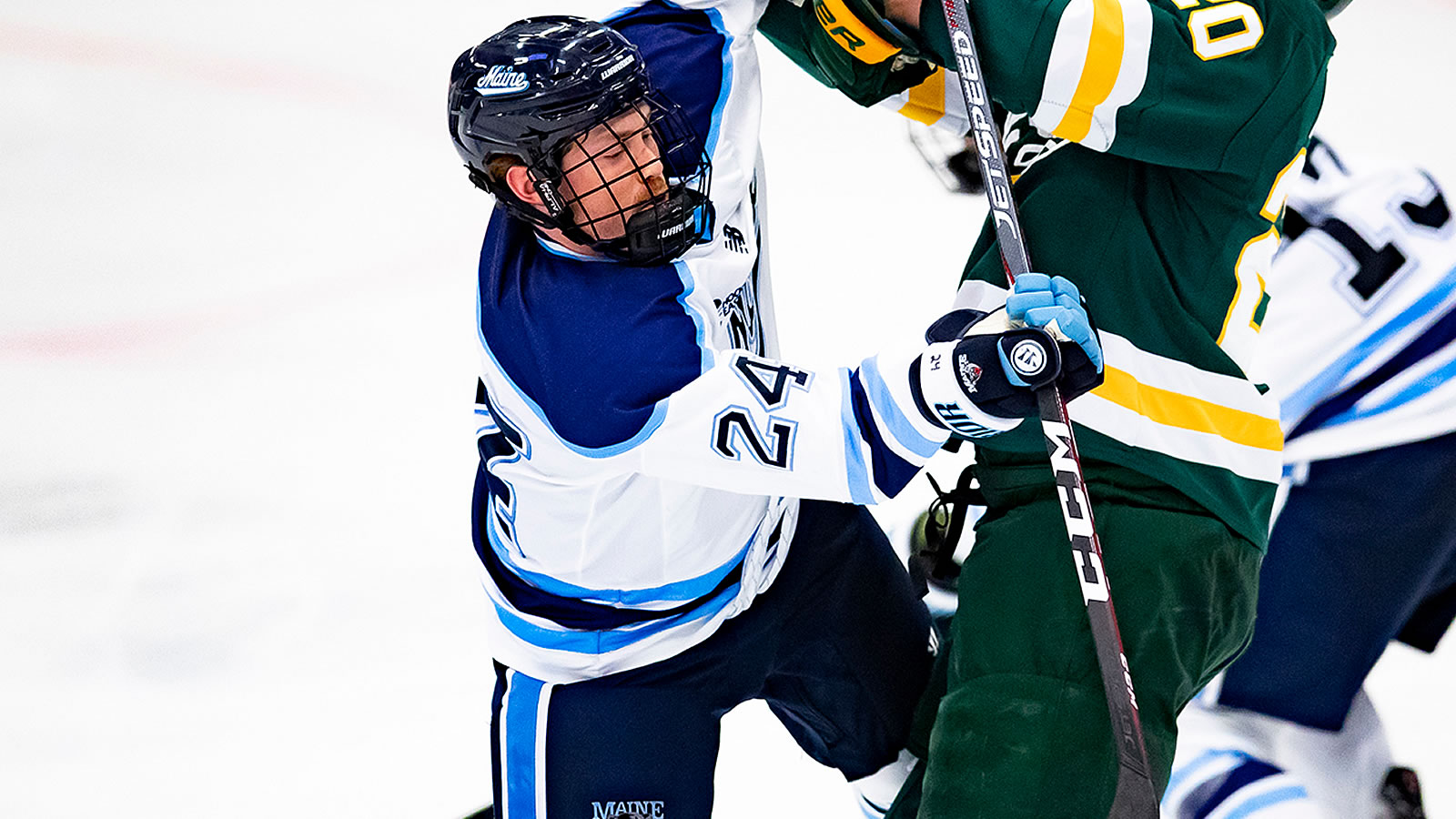 OMAHA, Nebraska -- The University of Maine men's ice hockey team was defeated by the #17/#15 University of Nebraska at Omaha, 5-3, on Saturday evening in the Baxter Arena.

First Goal (1-0 UNO): After the Black Bears were called for an early penalty, the Mavericks struck on the power play. Chayse Primeau took a one-timer off a pass from Taylor Ward. Two minutes into the first period, Maine trailed by a goal.

Second Goal (1-1): Seven minutes later, Grant Hebert tied the Saturday night contest at one goal apiece. Freshman defenseman David Breazeale started the scoring opportunity with a pass ahead to Tristan Poissant. The forward, added to the lineup moments before the game, found the newly minted Black Bear, Grant Hebert. The transfer did the rest and tied the non-conference match-up at one.

Third Goal (2-1 UNO): Less than two minutes later, Omaha once again took a one goal lead. Kevin Conley lit the lamp moments after the squads returned to the ice from the under 12-minute media time out. With just over half of the period remaining, Maine once again found itself trailing.

Fourth Goal (2-2): Adam Dawe tied the series finale at two goals for each side four minutes into the second period. Nolan Renwick flipped the ice with a strong pass to Jakub Sirota on the blue line. The veteran defenseman found an unmarked Dawe. The senior did the rest and scored Maine's first power play goal of the short season.

Fifth Goal (3-2 Maine): The Black Bears snagged its first lead of the night when Brad Morrissey made quick work of the Omaha defense. Lynden Breen started the scoring opportunity with a touch pass to freshman Breazeale. The freshman, who recorded his first career point earlier in the game, found Morrissey. The long haired forward ripped a shot that gave his squad a one goal lead.

Sixth Goal (3-3): Omaha once again scored on the power play. Taking advantage of the space provided by the man advantage, Cameron Berg tied the non-conference contest, 3-3, with six minutes remaining in the second period.

Seventh Goal (4-3 UNO): 1:52 into the third period, Matt Miller scored a short-handed, and eventually game winning, goal for Omaha. The Black Bears started the final period on the man advantage. Miller took advantage of a 1-on-goaltender opportunity and gave his squad a lead early in the final frame.

Tristan Poissant made his season debut tonight against the University of Nebraska at Omaha.

Maine went 1 for 7 on their power play opportunities, as the Mavericks were 2-5 on its player advantages.

The Black Bears blocked four shots and won 34 face-offs as a team.

Maine has next weekend off before opening the home portion of the 2021-22 schedule. The Black Bears are scheduled to host Sacred Heart on October 22nd. Puck drop is set for 7:30 pm.