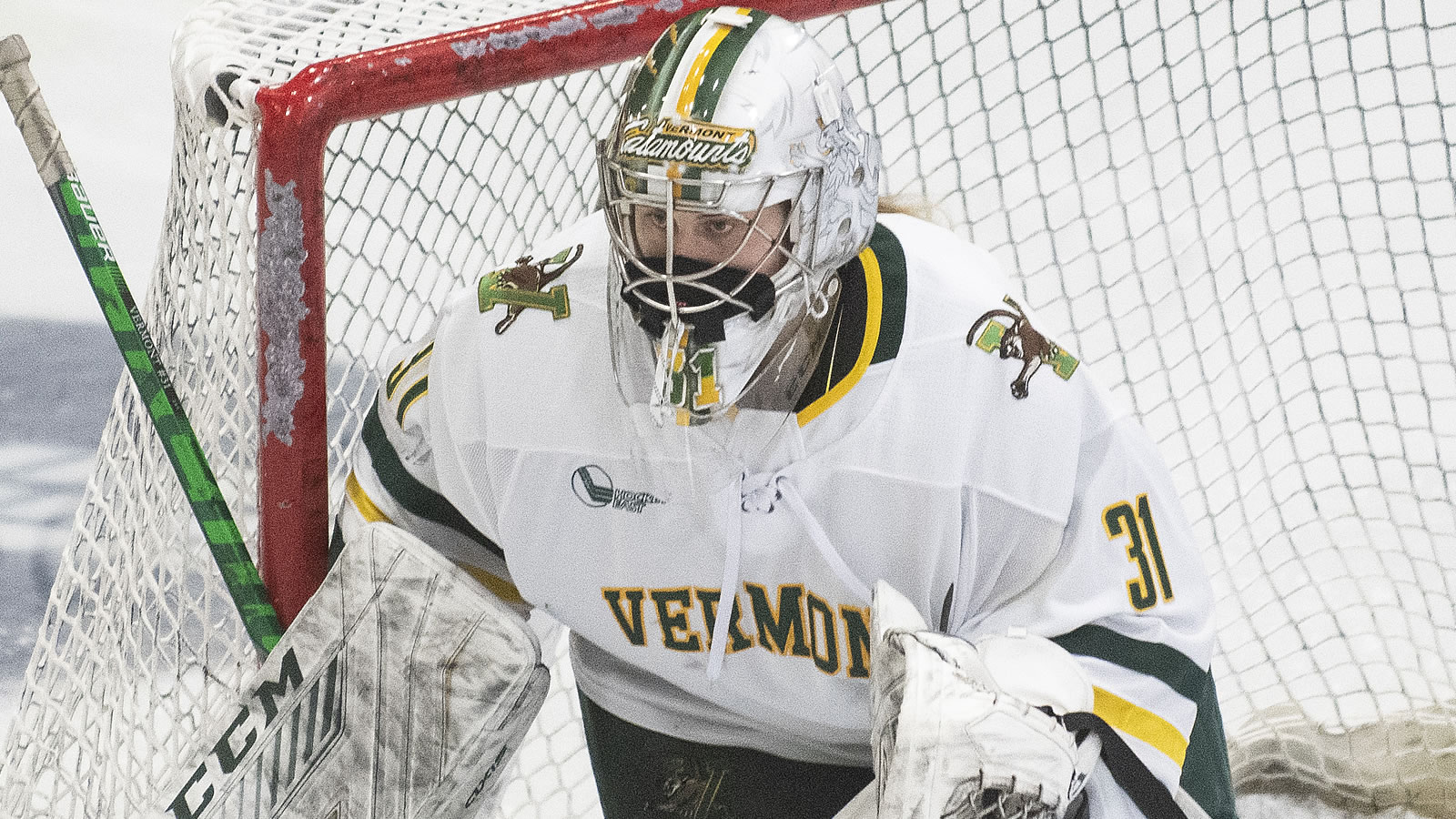 Senior netminder Blanka Škodová made 23 saves for the Catamounts
Vermont Defeated by Colgate, 2-0

BURLINGTON, Vt. - No. 4 Colgate scored two goals 48 seconds apart in the second period and held on to hand Vermont women's hockey its first loss of the 2021-22 campaign at Gutterson Fieldhouse 3-0 Saturday afternoon. With the win, the Raiders improved to 5-0-0 on the campaign while the Catamounts fell to 2-1-0.

"It was a great hockey game at Gutterson today and there was a lot of positive takeaways for us," Head Coach Jim Plumer said. "We played a great first period and we have to find a way to sustain that high level of play for an entire 60 minutes. Colgate is an excellent team and I am looking forward to us capitalizing on our chances tomorrow."

- In a scoreless and entertaining first period both teams had their best opportunity within seconds of each other. With 6:01 left in the first Colgate's Maggie MacEachern took advantage of a UVM defender who fell on the play and skated out in front of UVM's Blanka Škodová. Škodová made a brilliant leg save to keep it scoreless. The rebound was pushed ahead to Alyssa Holmes on a breakaway. With three Raiders defenders in pursuit her backhand attempt was stopped by Colgate's Kayle Osborne.

- The Raiders opened the scoring on the power play 11:49 into the second period. Škodová made an initial save through traffic on Rosy Demers but the rebound was loose in front, Sydney Bard gathered the puck and found Sammy Smigliani with a cross-ice feed that she one-timed home for her first of the season.

- 48 seconds later Colgate doubled its lead in transition. Kalty Kaltounkova fed a pass towards the net and Danielle Serdachny beat Škodová and UVM's defense to the puck tapping it home for her second of the campaign.

- Dara Greig added an empty-net tally with 1:20 left in regulation to seal the win for the Raiders.

- Maude Poulin-Labelle led all Catamounts with four shots this afternoon.

- This afternoon was the first time Vermont has been shutout since December 20, 2020 against New Hampshire.

- Blanka Škodová was named the third star of the game, she made 23 saves in net for the Catamounts.

Vermont and Colgate will be back at it tomorrow afternoon at 4 p.m. All the action will be broadcast live for free on CollegeSportsLive.com with Rob Ryan on the call.