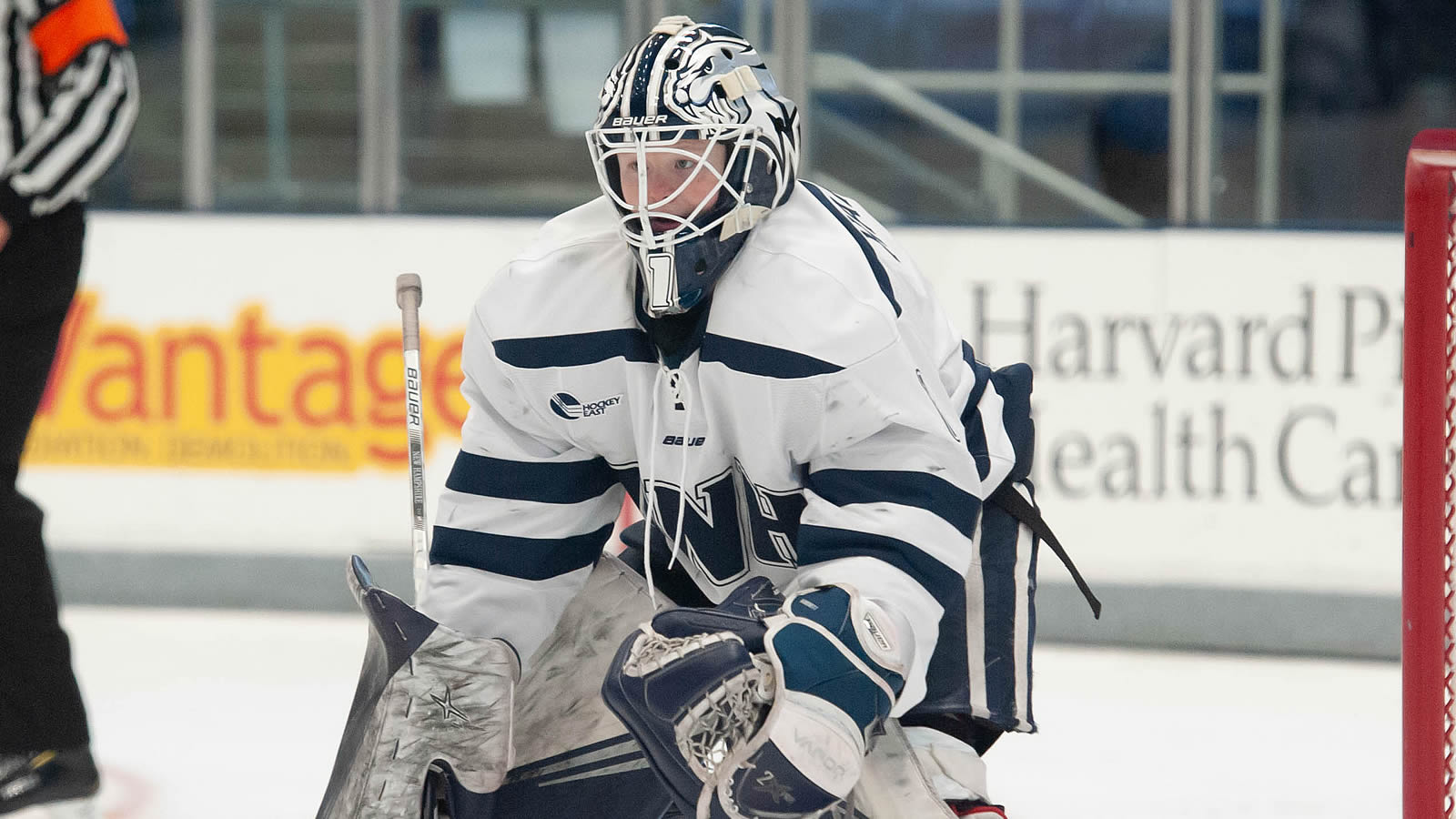 Junior Jada Christian (Caledon East, Ontario) scored the only goal in the Best-of-3 shootout to give UNH an extra point in the Hockey East standings. The teams skated to a 3-3 tie through 60 minutes of regulation and five minutes of overtime to send the game into a shootout.

Junior goaltender Nicky Harnett (Plymouth, Minn.) stopped a total of 17 shots, including six in overtime. She also stopped two of the three Terriers in the shootout, but those are not credited as saves.

BU goalie Kate Stuart made 30 saves (.909 save percentage). Courtney Correia (one goal, one assist) and Mackenna Parker (two assists) both recorded two points for the Terriers.

- The Wildcats' next home game is Saturday, Oct. 16 (7 p.m.), when UNH and BC finish off a home-and-home series at the Whittemore Center.

- UNH recorded a 12-4 shots on goal advantage in the first period and outshot the Terriers 21-8 in total.

- Freshman Kira Juodikis (LaSalle, Ontario) scored the third goal of her rookie campaign just 4:27 into the first period on the assist from Thierus to give the 'Cats a 1-0 lead. Thierus chipped the puck through the neutral zone. Juodikis corralled the puck at the blue line and led a 3-on-1 break into the left circle, where she wristed a shot past Stuart's glove into the upper-right corner.

- Christina Vote quickly evened the score at 1-1 with an assisted goal from Alex Allan and Ellie Larson at 5:44. Allan's initial shot from the left point was redirected into the cage by Vote.

- Stuart saved 7 of 8 shots on goal for the Terriers in the second period, while Harnett saved 4 of 5 defending UNH's cage.

- Boston University opened the second period aggressively, with Kylie Roberts breaking the tie with an assisted goal from Courtney Correia and Mackenna Parker at 3:06.

- BU earned two power plays during the second period after UNH was called for a tripping penalty at 4:47 and an interference penalty at 12:28. However, two strong Wildcats' penalty kills kept the score at 2-1.

- UNH found the equalizer at 16:54 when freshman Marina Alvarez (Center Moriches, N.Y.) scored her first career goal to knot the game up at 2-2. Senior Paige Rynne (Ancaster, Ontario) and freshman Brooke Hammer (Commerce Township, Mich.) recorded their first assists of the season as Hammer took the initial shot from the right points and Rynne, at the left doorstep, fed a pass back to Alvarez in front.

- Heading into the second intermission, UNH held a 23-14 faceoff advantage and outshot the Terriers 20-9 (shots on goal).

- Madison Cardaci broke the tie for BU with her first goal of the season coming off of an assist from Parker at 3:22.

- UNH was called for a third consecutive penalty of the contest at 4:46 but the visitors could not capitalize for the fourth time in the game.

- Thierus followed her own shot at the left doorstep to tie the game, 3-3, at 6:53 with her first goal of the season. Senior Emily Rickwood (Brantford, Ontario) made the outlet pass and sophomore Brianna Brooks (Whitby, Ontario) earned the secondary assist; both were credited with their first assists of the year.

- Brooks was denied her first goal of the season after a diving defensive effort on a 2-1 break.

- Junior Annie Berry (Milton, Mass.) almost turned a blocked shot into a solo fastbreak score, but she was denied by Stuart with 90 seconds remaining in regulation.

- Neither team could pull ahead before time expired in regulation.

OVERTIME PERIOD - Brooks was inches away from putting the Wildcats on top, but her shot from the left circle rang off the crossbar just 34 seconds into the extra session.

- Parker broke away from the defense and drew a tripping penalty with 2:45 left in overtime.

- The Wildcats fended off BU's fifth power play - Harnett made four saves during the penalty kill - to force a shootout.

- In Round 1, Correia dragged the puck to the right but lost control and, with Harnett in position at the post, pushed a shot wide of the cage. Berry's shot was stopped by Stuart.

- Round 2 opened with Kylie Roberts being denied by Harnett.

- Christian scored the only goal of the shootout when her shot beat Stuart between the legs.

- Harnett then stopped Julia Nearis to give New Hampshire the 1-0 shootout win.

- In addition to an assist on the game-tying goal, Rickwood led both sides with five total blocks.

- Neither team scored on the power play. UNH had one opportunity and BU had five.

- Juodikis currently leads the Wildcats in total points (three) and goals (three) through five games. Only two freshmen in the past 10 years have led UNH in total points for a full season: Nicole Kelly in 2020-21 (14pts) and Alexis Crossley in 2012-13 (23pts).

- Alvarez scored her first goal and point of her career.

- Rynne and Brooks recorded their first assists and points of the season.

- Hammer recorded her first assist and point of her career.

- The teams split a two-game series at the Whitt last season.