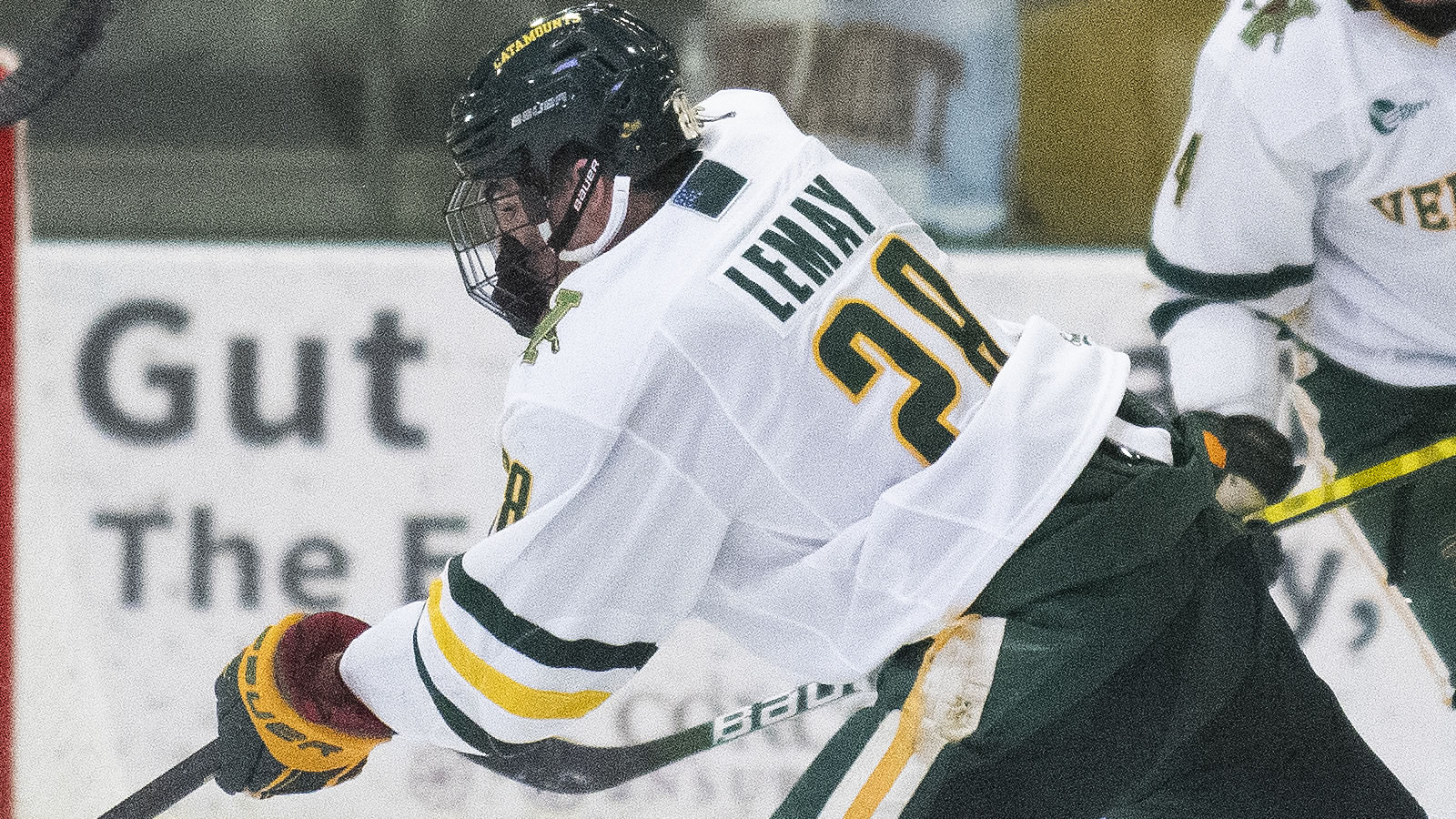 BURLINGTON, Vt. - Colgate's Josh McKechney scored two goals for the Raiders as they built a 5-1 lead through two periods over Vermont and held on to defeat the Catamounts 5-3 Friday night in non-conference action from Gutterson Fieldhouse on Opening Night Presented by TD Bank. With the win, the Raiders improved to 2-0-0 on the campaign while the Catamounts fell to 0-1-0.

"Similar to last game vs Mercyhurst, there were parts of this game where our lack of experience and youth were evident," Head Coach Todd Woodcroft said. "We took too many penalties and didn't skate enough when on the puck to draw penalties ourselves. On a positive note, our specialty teams are a source of encouragement and for the second game in a row, our third period was our best period of the game. We were very good in the last twenty minutes, but found a way to lose the game."

- The Catamounts opened the scoring 2:02 into the first period with their first power play tally of the season. From the point Cory Babichuk fired a shot on net that was padded aside by Colgate's Carter Gylander. The rebound came to Robbie Stucker at the top of the slot and his quick release fooled Gylander for UVM's first goal of the young season. Alternate captain Jacques Bouquot earned the secondary assist on the goal.

- The Raiders equalized 65 seconds later on a partial breakaway. Ben Raymond stole the puck from a Vermont defender and skating in alone before beating Gabe Carriere with a quick shot under his blocker to make it 1-1.

- McKechney and Nick Anderson added two more Colgate goals 2:56 apart late in the first to give the visitors a two-goal cushion after twenty minutes.

- 1:25 into the second frame Colton Young made it a 4-1 contest with a one-timer at the side of the net. From behind the net Ethan Manderville found Young alone to the side of the net and his one-timer just beat Carriere. McKechney's second of the contest made it 5-1 with 2:22 left in the period.

- Following the second period Tyler Harmon (4 Saves) took over between the pipes. Carriere finished the night with 18 saves.

- Vermont got back into the game with the same third period spark they showed a week ago scoring twice in just 33 seconds. William Lemay scored his first of the season 5:47 into the third period. On a two-on-two rush Will Zapernick fed a perfect pass to a streaking Lemay. Lemay made a lateral move and snuck a backhand through the legs of Gylander to make it 5-2.

- Seconds later Philip Lagunov scored his first goal as a Catamount. Carter Long pinched along the boards and kept the puck in the Colgate zone while centering a feed to Bouquot. As Bouqout spun to fire a shot in the slot, he lost control of the puck. Lagunov was cutting to the net front as this happened and corralled the loose puck and tucked it home with a backhand before Gylander could recover.

- Vermont's 41 shots tonight are the most by the Catamounts in the Todd Woodcroft era.

- Minnesota transfer and Columbus Blue Jackets draft pick Robbie Stucker had a goal and an assist and was named the third star of the contest. Stucker also blocked a team-high three shots. Jacques Bouquot also chipped in two points, both assists.

- Sophomore forward Ray Vitolins was dominant in the faceoff circle for the Catamounts. He won a game-high 17 draws for UVM in 21 opportunities.

Vermont and Colgate will be back at it tomorrow night at 7 p.m. All the action will be broadcast live for free on CollegeSportsLive.com with Adam LaFleur on the call.