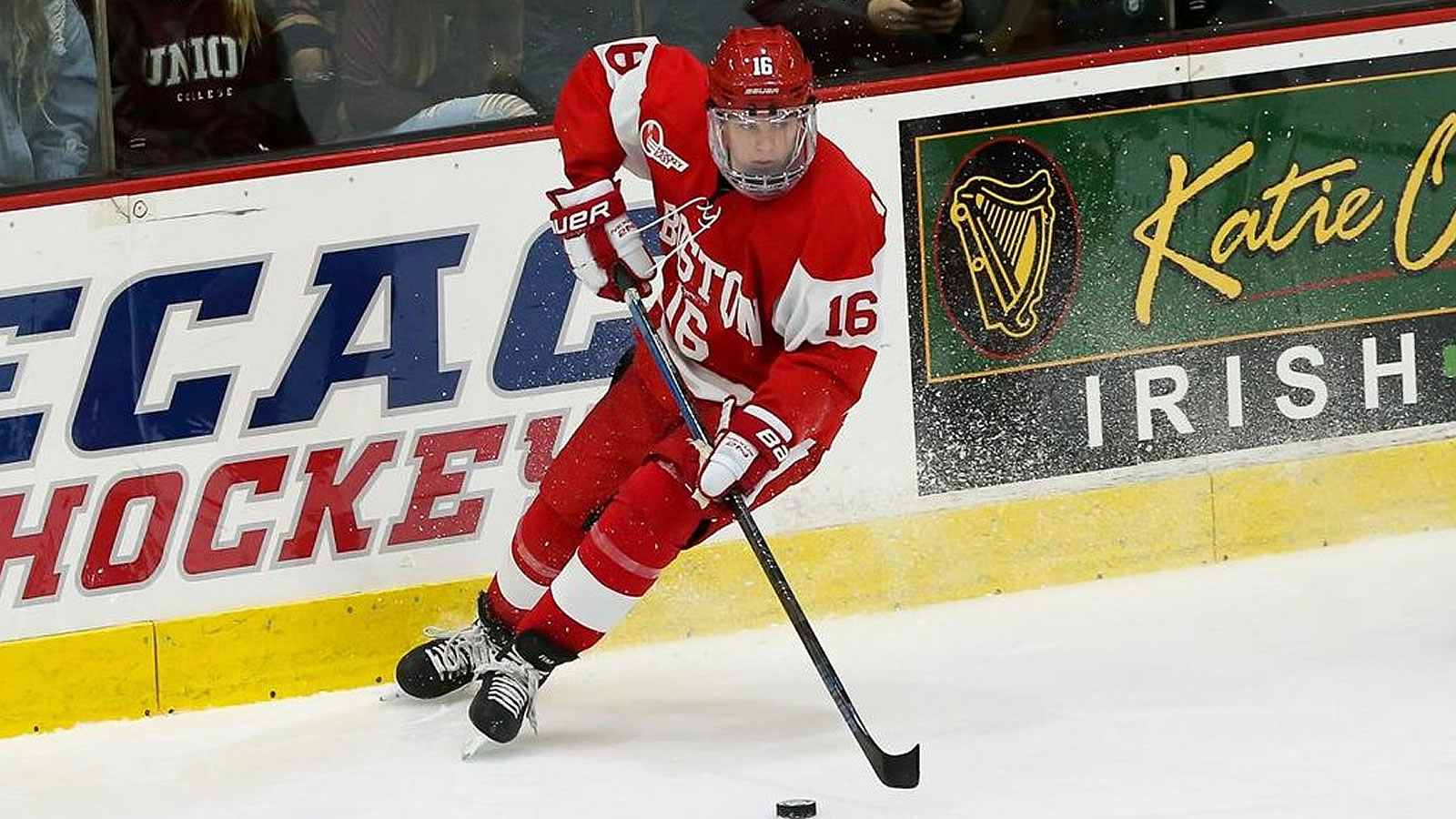 HARTFORD, Conn. - The Boston University men's ice hockey team scored two goals in a span of 1:43, capped by junior Robert Mastrosimone's power-play goal with 3:57 remaining in regulation, to earn a 2-1 win at UConn in the program's 100th season opener on Friday night at XL Center.

BU (1-0-0, 1-0-0 HE) trailed UConn (1-1-0, 0-1-0 HE) for much of the contest, but junior Sam Stevens tied the game with 5:40 to play before Mastrosimone's heroics put the Terriers ahead. Junior Domenick Fensore and freshman Ty Gallagher assisted on Stevens' marker while juniors Wilmer Skoog and Case McCarthy provided the helpers on the game-winner.

Sophomore goaltender Drew Commesso was sensational on Friday, as he made 33 saves, including a highlight-reel stop at the end of the second period, to backstop BU to the win.

"I'm really happy for our team," head coach Albie O'Connell said. "I really liked our leadership and our effort. It's great any time you can get three points in Hockey East, especially on the road against one of the better teams in our league."

- Vladislav Firstov opened the scoring for UConn at 5:04 of the first when he got behind a BU defender and slid the puck underneath Commesso.

- Sophomore Luke Tuch nearly answered on a power-play chance halfway through the frame, as his shot snuck through Darion Hanson's (43 saves) pads, but a Husky defender swept the puck off the goal line.

- Commesso made two nice stops on a pair of point-blank chances during a UConn power play to keep the deficit at one heading into the second stanza.

- UConn nearly made it 2-0 in the final seconds of the second period, but Commesso made a sensational save to keep the deficit at one. He went post-to-post to deny Kevin O'Neil with a spectacular glove stop.

- The Terriers killed off a two-man advantage to start the third period.

- Junior Ethan Phillips nearly scored a highlight-reel goal as he dangled past a UConn defender and in on Hanson, but the Husky net minder was equal to the task.

- Stevens' tying goal came right after a great individual effort by Fensore. The junior defender skated coast-to-coast and generated a shot chance that Hanson stopped. The rebound popped behind the net, and Stevens quickly gathered the puck and tucked it into the open net before Hanson reacted.

- Persistence on the power play led to Mastrosimone's goal. McCarthy began the sequence with a shot that caromed off the end wall and back to Skoog. His backhander was blocked, but the rebound came out to Mastrosimone, who caught the bouncing puck just right for the winner.

- UConn pressured in the final minutes as the Huskies looked for an equalizer, but Commesso and the Terrier defense stood tall to preserve the victory.

- The Terriers have won two of their last three season openers and have opened their road slate with a win in all three of those campaigns.

- BU has won two straight games against UConn, both of which have been on the road.

- Gallagher collected his first collegiate assist in his debut..

- Gallagher, Tristan Amonte, Tyler Boucher and Brian Carrabes all made their collegiate debut on Friday, while junior transfer Matt Brown made his first appearance as a Terrier.

- For the first time in 581 days, BU will host a game at Agganis Arena when the Terriers close out their home-and-home series with UConn on Saturday.