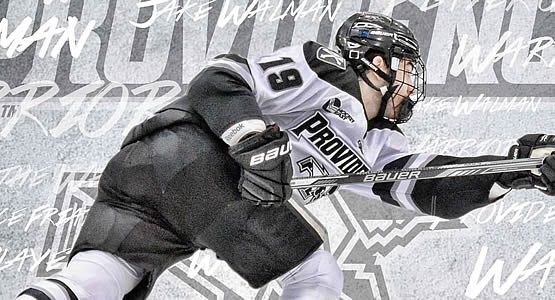 AROUND HOCKEY EAST: No. 4 Boston College and No. 7/8 Boston University enjoyed wins over No. 5 Denver this weekend in two battles of top-10 ranked teams. BC junior goaltender Thatcher Demko (San Diego, Calif.) had his shutout streak snapped at 206:02 of play, but recorded his fifth career assist in the 4-3 Eagle win ... BU senior forward Danny O'Regan (Needham, Mass.) became the 57th player in Terrier history to register 50 career goals ... Forward Tage Thompson (Orange, Conn.) became the second UConn freshman to record a hat trick this season when the rookie scored three goals against No. 7/8 BU Tuesday night ... The Maine Black Bears and UMass Minutemen skated in the Capital City Classic in Trenton, N.J. over the weekend, facing off with No. 15/13 Yale and Princeton. UMass sophomore forward Dennis Kravchenko (Laguna Niguel, Calif.) recorded his fourth multi-point game of the year with two goals in a 5-4 win over Maine in the semifinals of the tournament. He was selected to the All-Tournament team for his effort ... Merrimack College October with a weekend split with No. 7/8 Boston University and New Hampshire. Warrior senior forward Ben Bahe (Stillwater, Minn.) led the team with four points (1g, 3a), including his second three-point effort of the year in a 4-3 win over BU Friday ... Northeastern and Vermont battled in a home-and-home league series Thursday and Saturday night. Northeastern junior forward John Stevens (Sea Isle City, N.J.) had a goal and an assist in the set of games, winning 29 of 42 faceoffs on the weekend. Husky rookie Adam Gaudette (Fr., F; Braintree, Mass.) netted his first collegiate goal on the road at Gutterson Fieldhouse. Vermont's Anthony Petruzzelli (So., F; Federal Way, Wash.) scored a goal in each of the two games, potting Saturday's equalizer with just 2:01 on the clock en route to a 3-3 draw. Catamount sophomore forward Jarrid Privitera (Old Tappan, N.J.) has scored four goals in his last three games while junior Mario Puskarich (Fort Walton Beach, Fla.) has at least one point in six of his seven games played ... New Hampshire's Andrew Poturalski (Williamsville, N.Y.) score two power-play goals, including the game-winner, in a 4-2 road win at No. 17 Merrimack. His two goals with the man advantage were the first allowed by previously undefeated Merrimack all season ... Notre Dame captured a pair of road wins over UConn, including an 8-2 win in Brooklyn's Barclays Center Sunday afternoon. On the weekend, the Irish scored 10 goals from 10 different skaters. 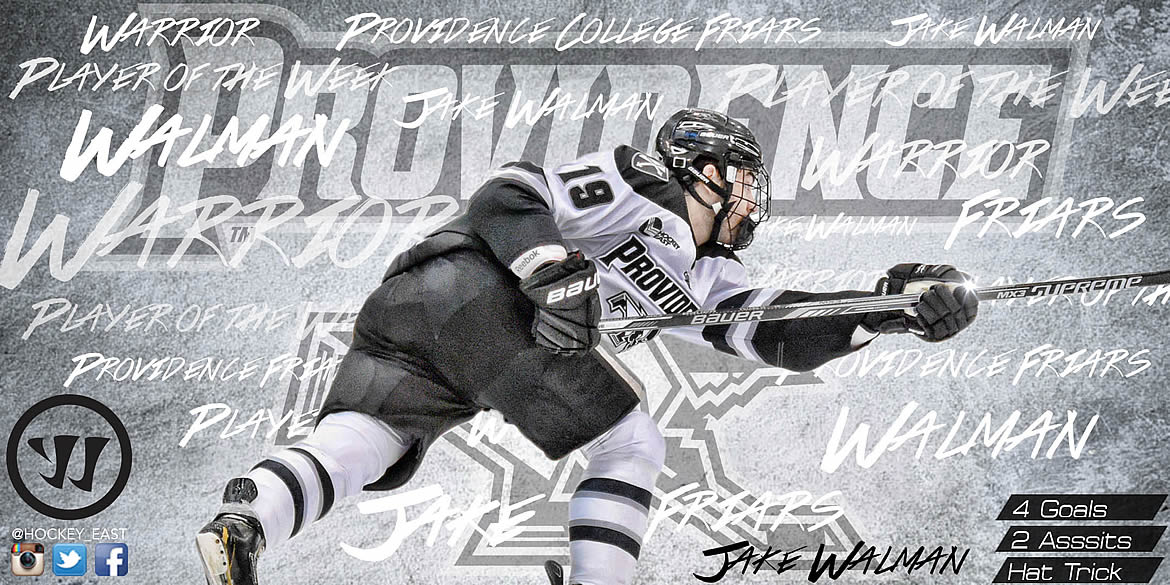 Walman racked up a six-point weekend on four goals and two assists at Colgate, including a hat trick in Friday night's victory. Walman is tied for first in the NCAA with seven goals and ranks first among defensemen in goals (7) and points (12). 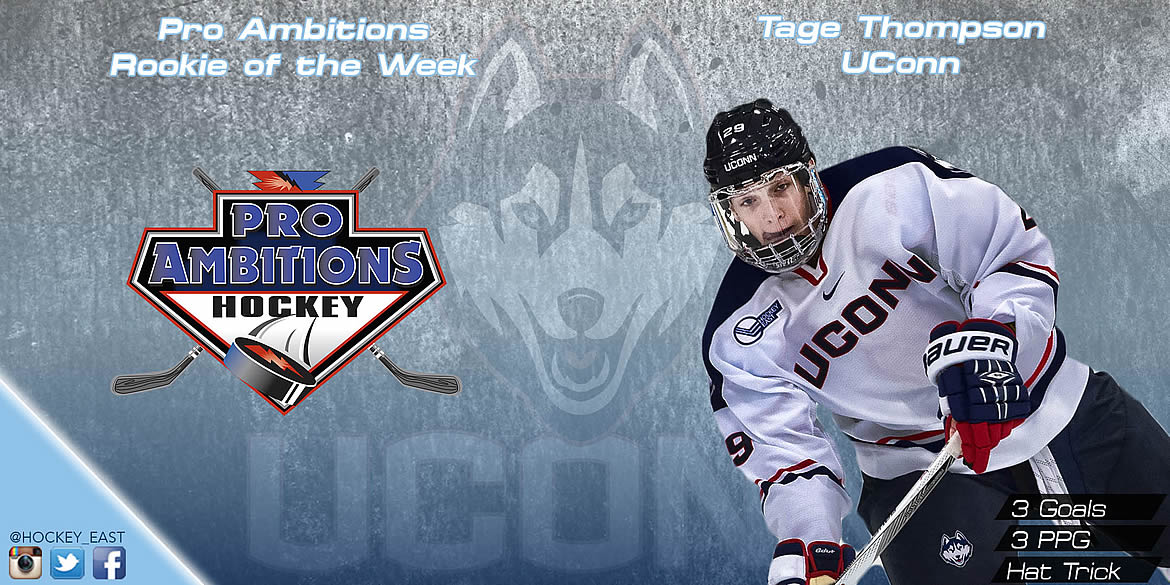 Thompson became the second Husky freshman to record a hat trick after he netted three goals Tuesday night against Boston University. He helped UConn to the first win over the Terriers in program history, a 5-2 win at the XL Center in Hartford, Conn. 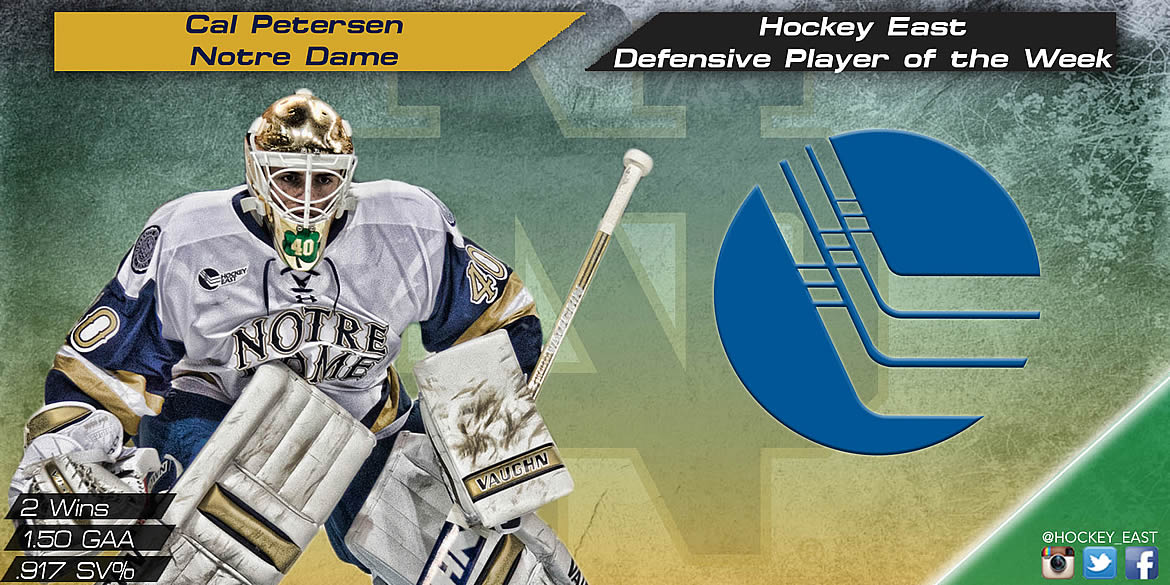 Petersen took home two wins from UConn on the weekend, including an 8-2 win at Brooklyn's Barclays Center Sunday afternoon. The sophomore netminder collected a 1.50 goals against average and .917 save percentage in backstopping the Irish to a pair of league wins.

Dane Gibson, ME (Fr., F; Sidney, B.C.) Potted the first goal of his career against Princeton at the Capital City Classic.

Dennis Kravchenko, UMA (So., F; Laguna Niguel, Calif.) Had his fourth multi-point game of the year with two goals over Maine Friday night.

Andrew Poturalski, UNH (So., F; Williamsville, N.Y.) Pushed UNH to a 4-2 road win at No. 17 Merrimack with two power-play goals, including the game-winner. His two strikes with the man-advantage were the first allowed by Merrimack this season.

Anthony Petruzzelli, UVM (So., F; Federal Way, Wash.) Scored a goal in both games of a home-and-home with Northeastern to finish plus-two.

Jarrid Privitera, UVM (So., F; Old Tappan, N.J.) Had two goals on the weekend against NU and leads UVM with five goals.