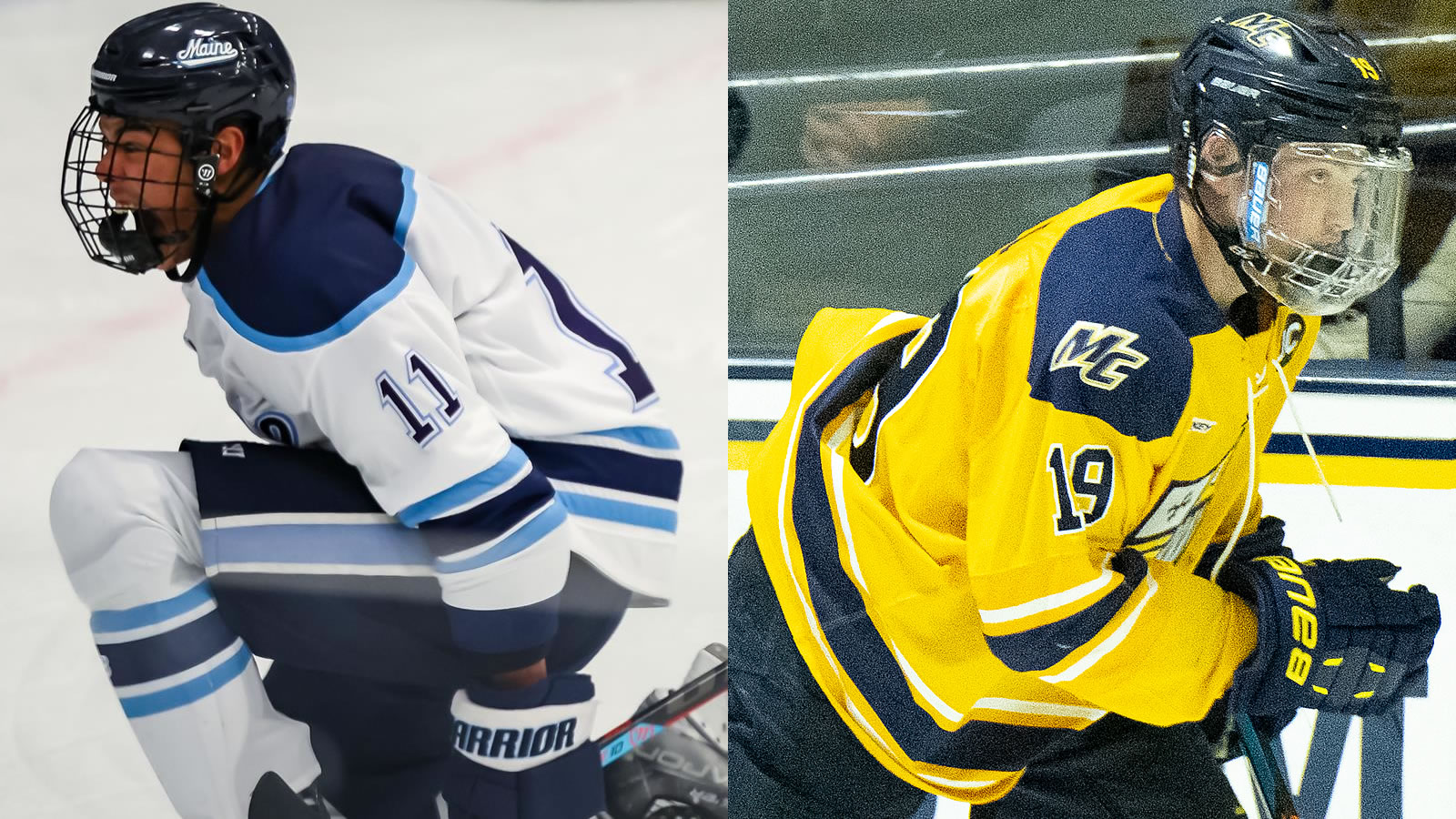 Maine earned its first sweep in Hockey East play since 2019-20 as the Black Bears turned aside Vermont twice in a pair of road games in Burlington. Donavan Villeneuve-Houle netted both game-winning goals while senior captain Jakub Sirota dished out three assists and scored once.

Boston University swept New Hampshire, 6-3 and 3-0. Both game-winning tallies came off the hot stick of Domenick Fensore, who recorded four points on the weekend (3g, 1a).

UConn snapped Merrimackâs seven-game winning streak with a 3-1 road win on Tuesday night. Arsenii Sergeev moved to 6-1-1 on the year with 28 saves. Alex Jefferies helped to right the Warriorsâ ship in the rematch in Hartford on Friday, netting the game-winning goal and handing out three assists in a 7-3 win.

Boston College and Providence skated to a pair of stalemates, 1-1 and 2-2, with each team taking an extra league point by way of a shootout win. Eagles goaltender Mitch Benson made 72 saves across the two games while the Friarsâ Nick Poisson scored both goals for his team on Saturday.

UMass Lowell earned two points in the Army ROTC Hockey East Standings with a 1-1 draw and shootout win at Massachusetts. Freshman Dillan Bentley scored his first career goal with just 56 seconds remaining in the second period to pull the River Hawks even while Gustavs Davis Grigals made 36 saves.

Donavan Villeneuve-Houle (Jr., F; Montreal, Que.) powered the Black Bears offense to its first weekend sweep in Hockey East play since 2019-20 as the junior scored both game-winning goals in a two-game road set at Vermont. The strikes extend his goal-scoring streak to three games (3g) and point streak to four (3g, 1a).

No player in the NCAA scored more points than Alex Jefferies (So., F; Lunenburg, Ma.) and his two goals and three assists. He scored the lone Merrimack goal in Tuesdayâs 3-1 loss, but helped to right the Warriorsâ ship on Friday, netting the game-winning goal and handing out three assists in a 7-3 win. 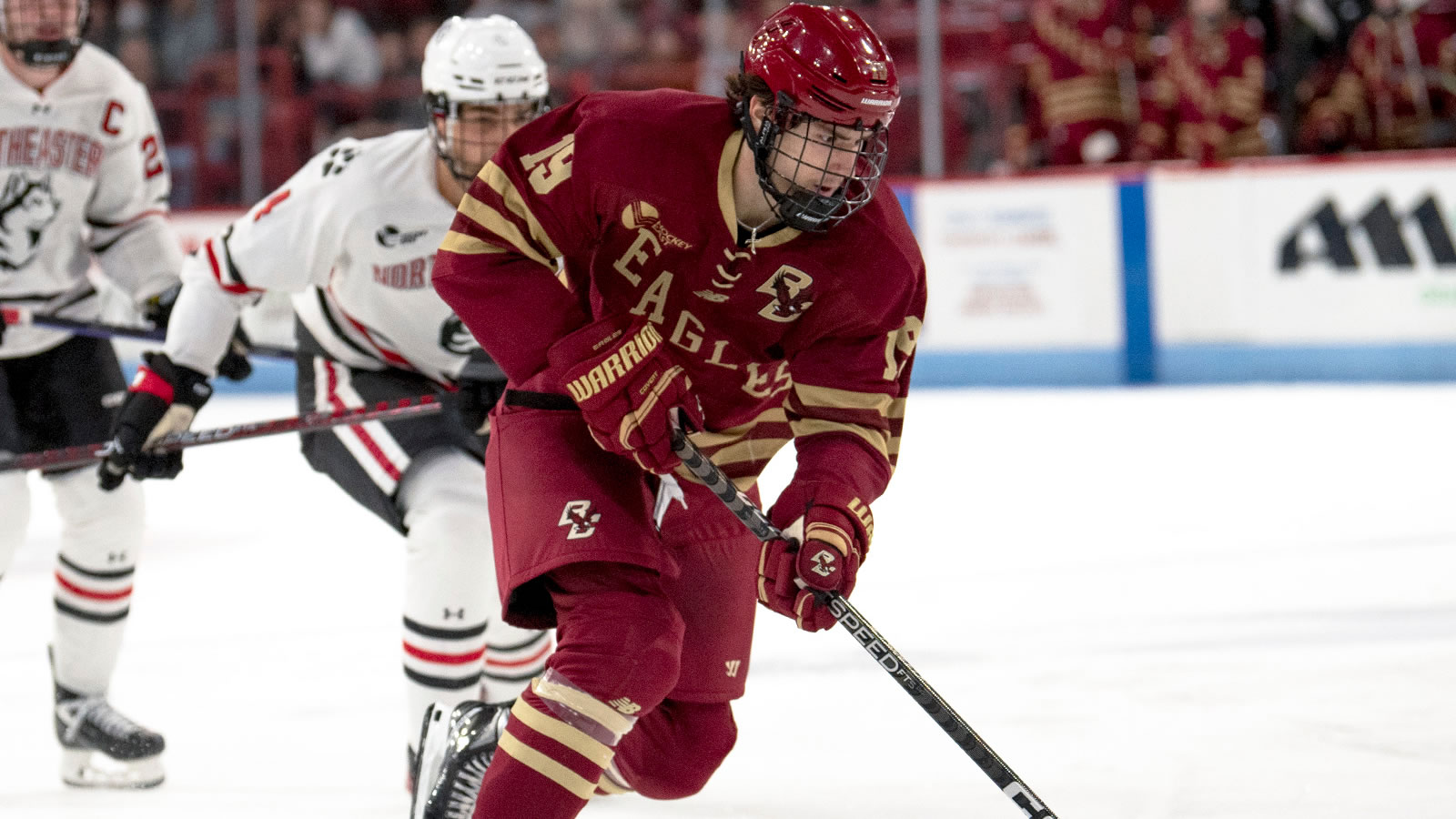 Cutter Gauthier (Fr., F; Scottsdale, Ariz.) scored two goals and added an assist in an undefeated week for Boston College. He set up the opening goal and then converted on the power-play in the Eaglesâ 4-2 win at Brown on Tuesday. He then scored the lone goal in a 1-1 draw with #10 Providence on Friday. Both goals game on the power-play and were part of 12 shots on goal, the second-best total in the NCAA last weekend. The rookie leads the Eagles with eight goals and 12 points. 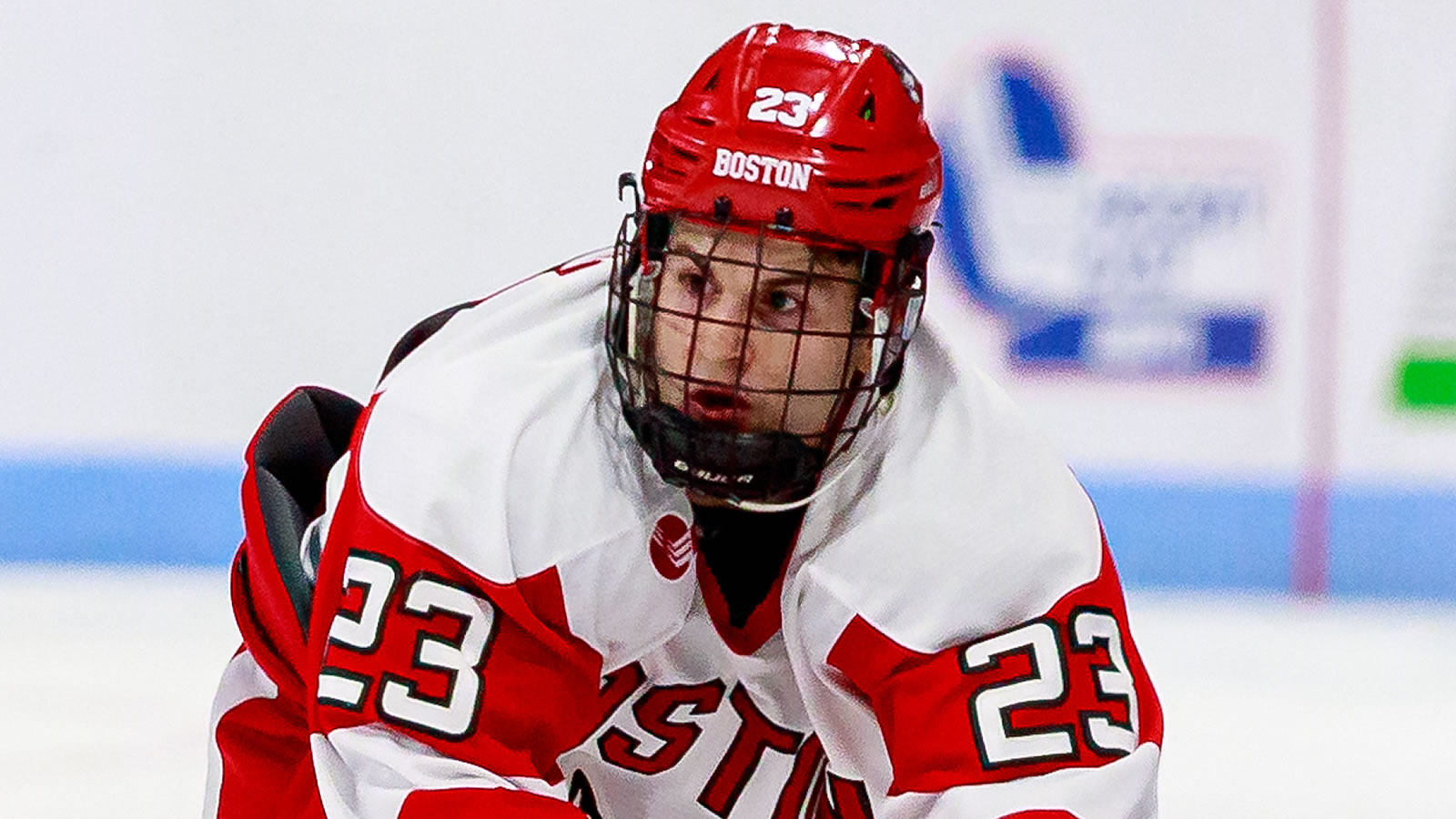 Domenick Fensore (Sr., D; Thornwood, N.Y.) scored three times, leading all of Hockey East, and added an assist for four points in a two-game sweep of New Hampshire. The captain defender netted both game-winning goals for the Terriers, and is current riding a four-game goal streak (5g) and four-game point streak (5g, 2a). 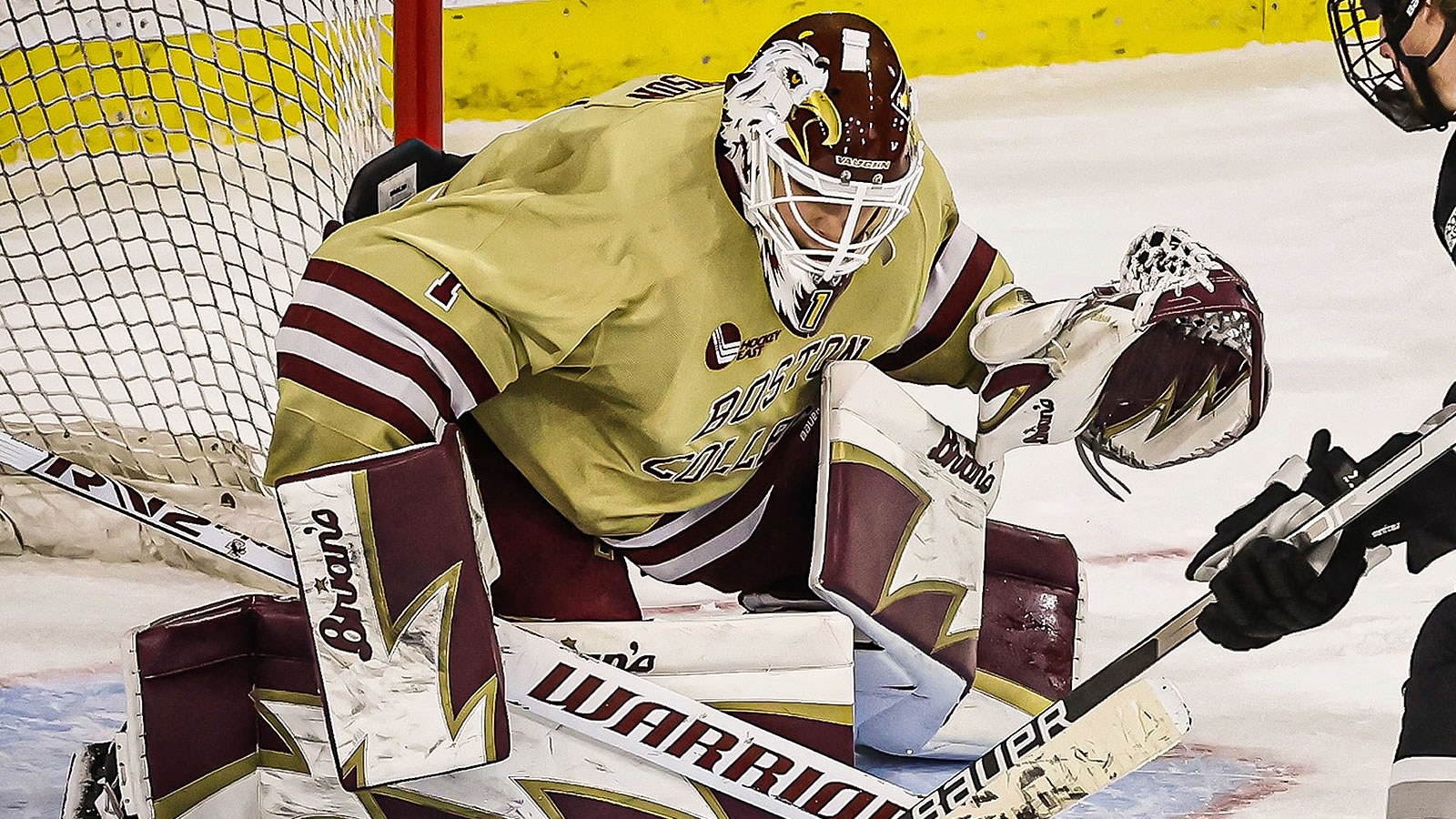 Mitch Benson (Gr., G; Windsor, Ont.) made more saves than any other NCAA netminder last week, stopping 95 of 100 shots across an unbeaten three-game set. He kicked out 23 saves in a 4-2 road win on Tuesday before turning aside a season-high 39 of 40 in a 1-1 draw Friday and stopping 33 of 35 in a 2-2 stalemate on Saturday. His .950 save percentage was tops in the country among all netminders with at least 120 minutes of work.

Lane Hutson, BU (Fr., D; North Barrington, Ill.) Tallied three assists in a 6-3 win at New Hampshire on Friday night, his second three-assist game this season. No other player in Hockey East had more assists this weekend than Hutson, who was dynamic in both games of the Terriersâ weekend sweep.

Vinny Duplessis, BU (Jr., G; Quebec City, Que.) Made 22 saves on Saturday for his fourth career shutout in a 3-0 win over New Hampshire. That followed a 26-save effort in a 6-3 triumph at UNH on Friday. Duplessis did not allow a single even-strength goal this weekend. He stopped all 11 shots he faced in Fridayâs third period to help the Terriers eventually tally the go-ahead goal midway through the frame.

Grayson Arnott, Maine (Fr., D; Toronto, Ont.) In his NCAA debut at Vermont, finished a weekend sweep with a goal and an assist over his first two career games in the Gutterson Fieldhouse.

Gustavs Davis Grigals, UML (Gr., G; Riga, Lativa) Made a season-high 36 saves and stopped two shootout attempts to help UMass Lowell clinch an extra point in the Army ROTC Hockey East Standings after drawing to a 1-1 tie on the road at #15 Massachusetts and improve to a 4-3-1 mark this season. He leads the conference in both save percentage (.939) and GAA (1.66), which also ranks third in the country in GAA and second in the country in save percentage.

Zachary Borgiel, MC (Jr., G; Fort Gratiot, Mich.) Made 33 saves in route to his sixth win of the year in Merrimackâs 7-3 win over UConn on Friday.

Cy LeClerc, UNH (Fr., F; Brentwood, N.H.) Scored two goals versus Boston University on Dec. 2 at the Whittemore Center. This was his second two-goal game of the season.