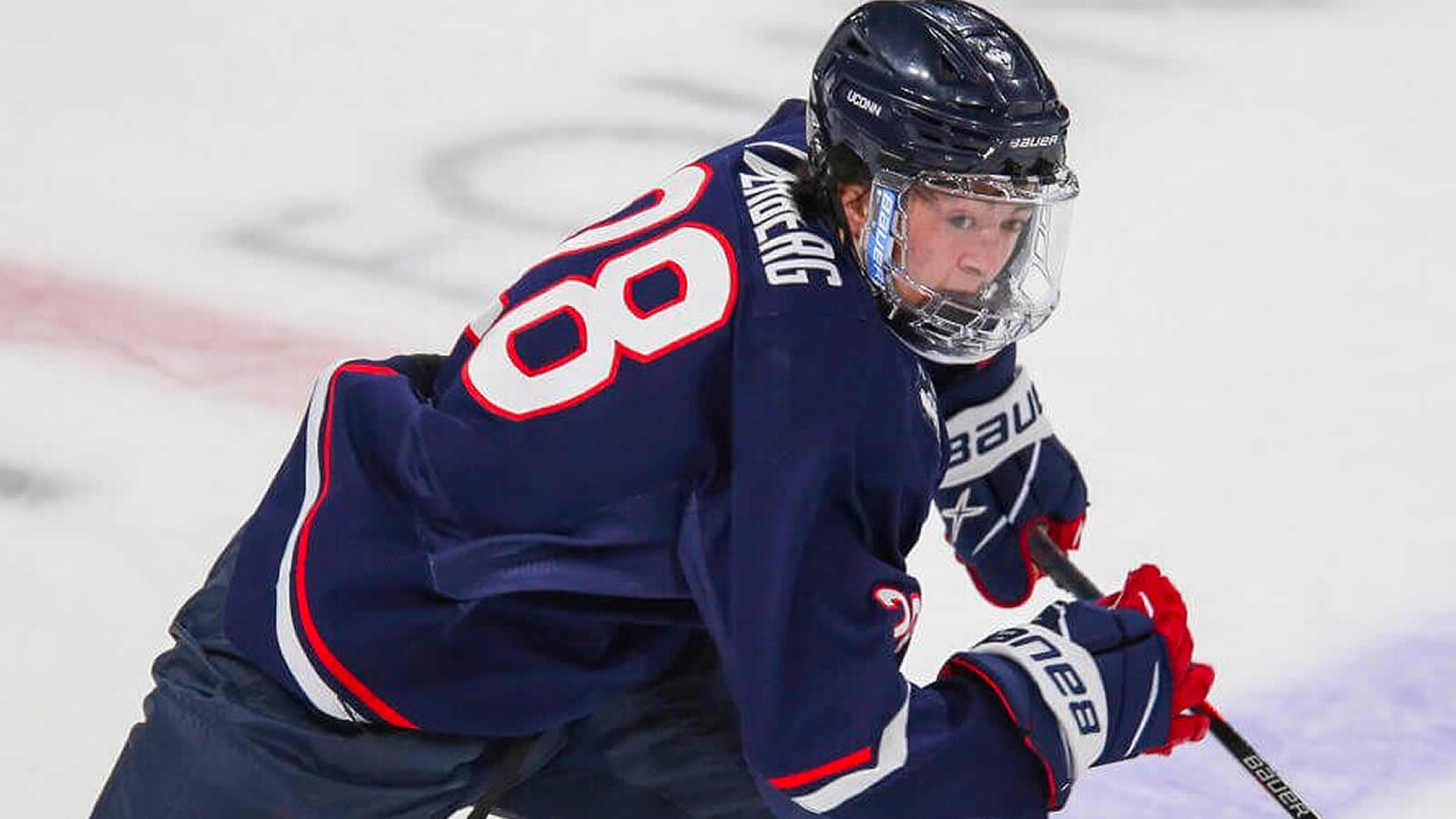 Merrimack dueled #5 Massachusetts in a pair of overtime tilts, earning three of six points in Hockey East play. Mac Welsher had three points (1g, 2a) including two assists in Fridayâs 3-2 overtime setback before he netted the game-winning goal in Saturdayâs 2-1 victory. Taylor Makar was the overtime hero for the Minutemen in their 3-2 triumph.

#9 Boston University and #18 UMass Lowell split a pair of one-goal games in a weekend series of top-ranked Hockey East programs. On Friday, UMass Lowell was powered by rookie Scout Truman, who scored both goals in a 2-1 win. The next night, Terrier freshman Lane Hutson scored the tying goal with 2:09 left in regulation before netting the unassisted overtime winner to deliver a 2-1 overtime win.

#10 UConn earned a 5-1 win over Boston College on Thursday to move to 7-1-1 on the year. Ryan Tverberg scored two goals and assisted on another for the Huskies.

#17/16 Northeastern earned four of six points at Maine. The Black Bears fought back Friday night to earn a 2-2 tie off a power-play and a shorthanded goal before earning the extra point with a shootout victory. The next night, Aidan McDonough scored twice and Devon Levi made 35 saves in a 4-1 bounce-back win.

Vermont went 1-0-1 at Colgate last weekend and is currently riding a three-game unbeaten streak. Gabe Carriere made 76 saves on 78 shots he faced and the Catamount goaltender has stopped 101 of the 104 shots heâs seen.

Hockey East currently boasts a 24-11-3 record against non-conference opponents, including a 17-4-1 mark in home arenas.

Ryan Tverberg (Jr., F; Richmond Hill, Ont.) in the lone game for UConn this past week, Tverberg scored two goals and assisted on another for three total points to help UConn take down Boston College Thursday evening at home.

PRO AMBITIONS CO-ROOKIES OF THE WEEK 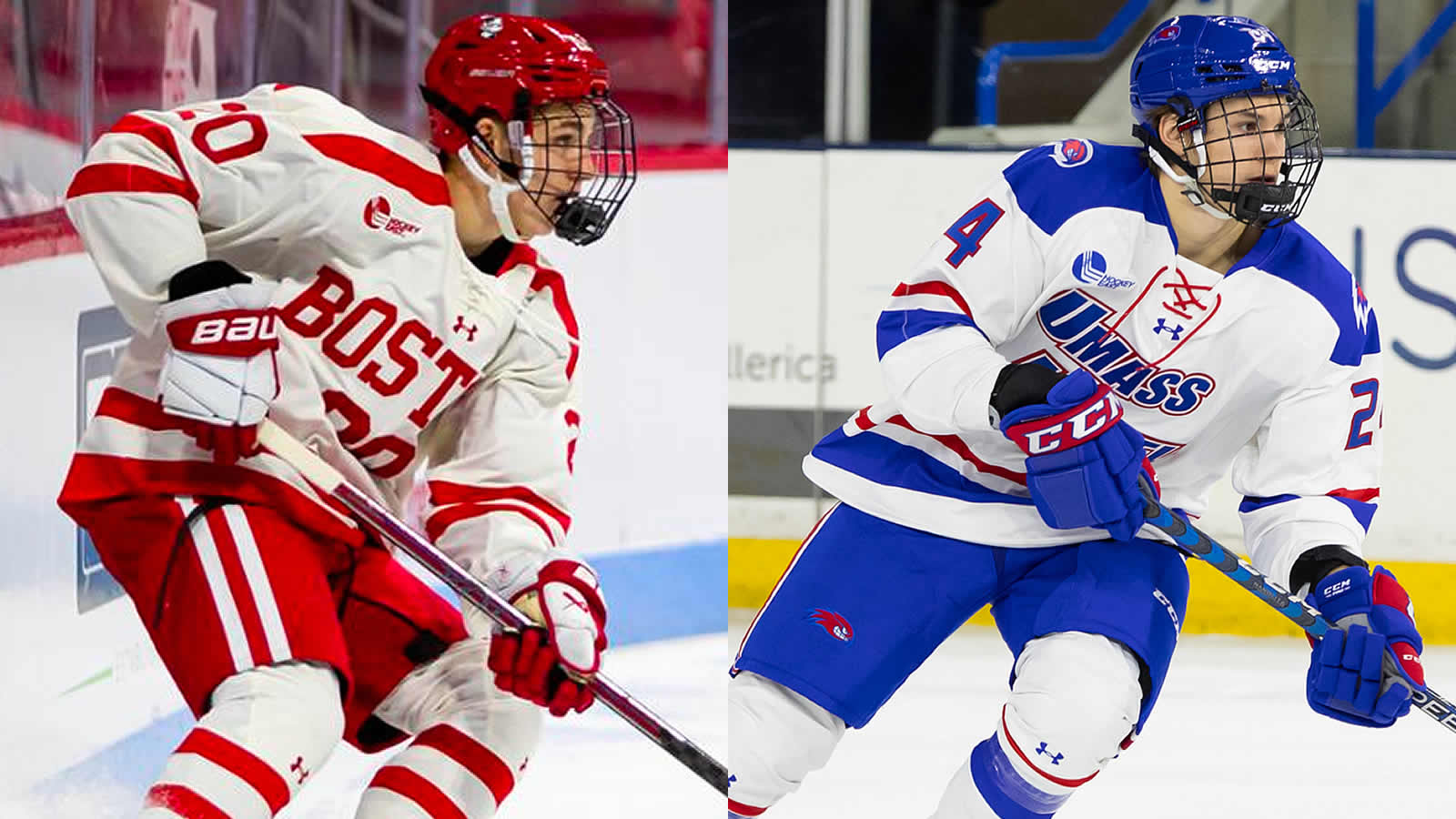 Lane Hutson (Fr., D; North Barrington, Ill.) proved the hero on Saturday night, as he scored the tying goal with 2:09 remaining in regulation before securing the overtime winner with a brilliant unassisted effort. It was Hutsonâs first multi-goal game as a Terrier and he is now second on the squad in goals (3), assists (5) and points (8).

Scout Truman (Fr., F; Lethbridge, Ont.) scored a pair of goals in Fridayâs 2-1 win over #9 Boston University at the Tsongas Center, his first career two-point performance. He added a team-best two blocks and finished with a plus-one rating. He currently ranks 28th in the conference in scoring with five points. 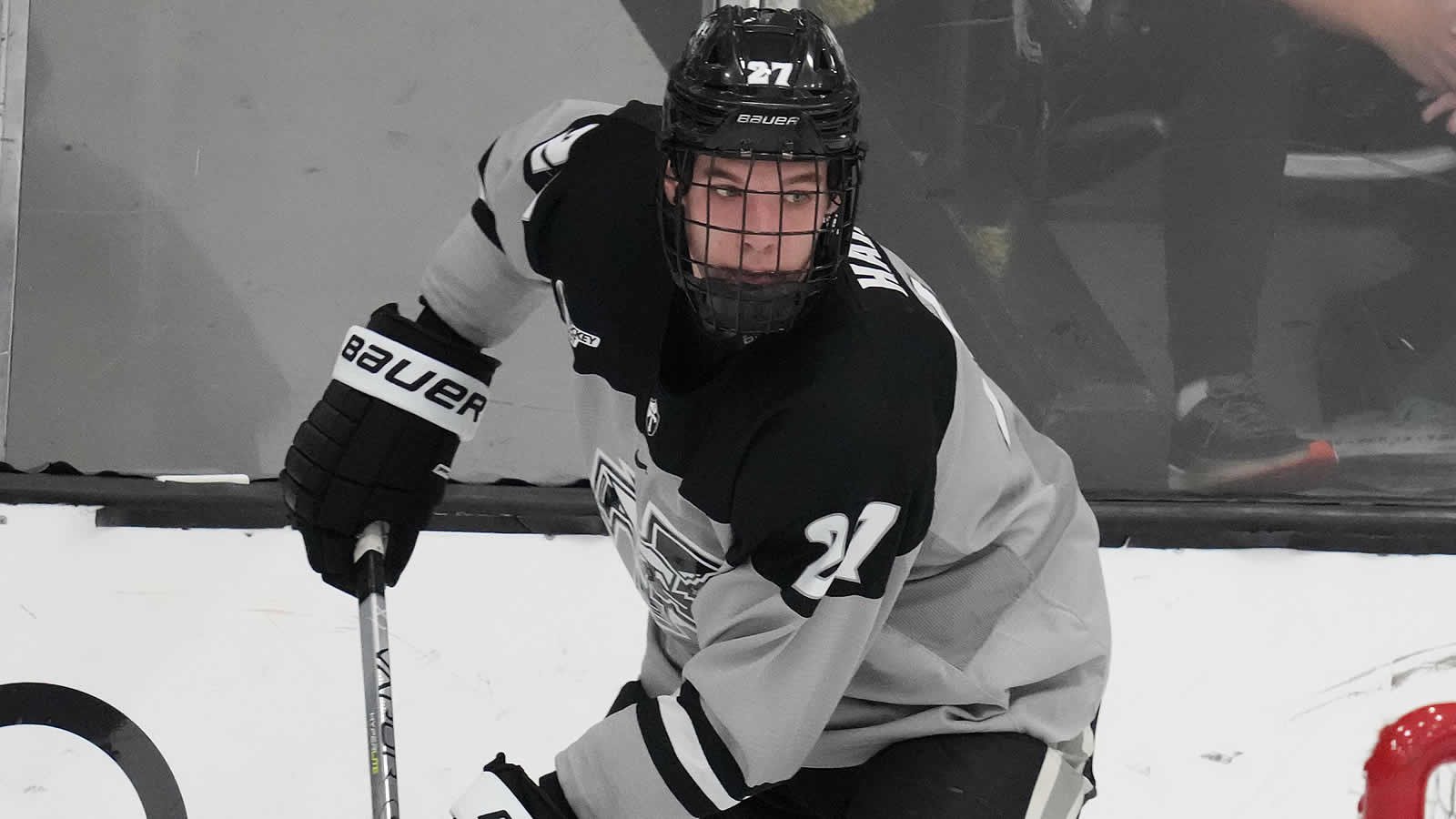 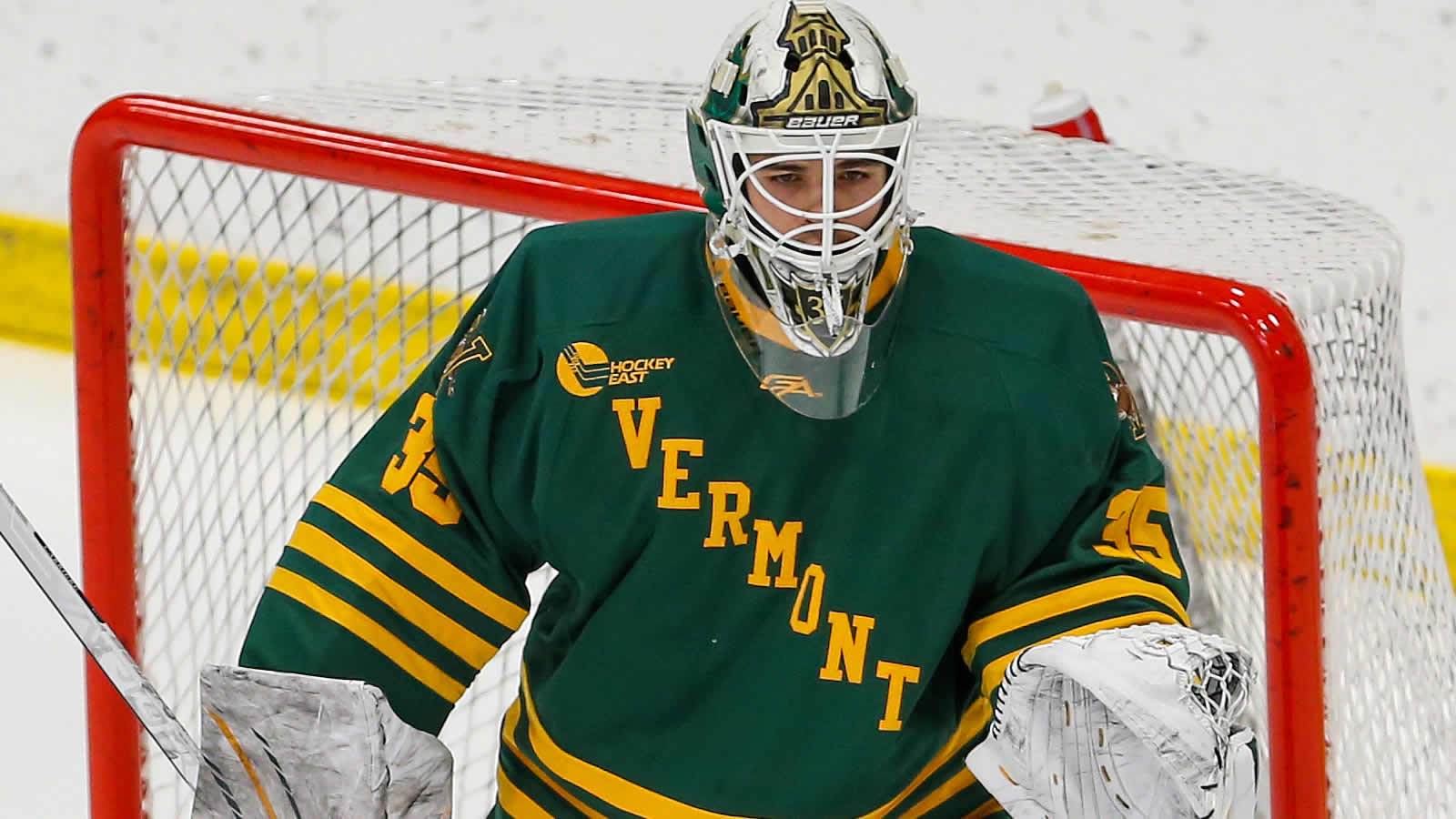 Gabe Carriere (Jr., G; Ottawa, Ont.) made 76 saves on 78 shots he faced as Vermont extended its unbeaten streak to three games with a 1-0-1 weekend at Colgate. In his last four games Carriere has stopped 101 of the 104 shots heâs faced, good for a .971 save percentage.

Drew Commesso, BU (Jr., G; Norwell, Mass.) Making his first start since Oct. 14, Commesso made 29 saves in the Terriersâ 2-1 win over UMass Lowell on Saturday night. Commesso made a crucial save in overtime on a breakaway chance to set the stage for the eventual game-winner.

Roman Kinal, UConn (Sr., D; Waterford, Mich.) Was a key player in the Huskies win over Boston College, assisting on two goals, including the game-tying goal en route to a 5-1 victory. In addition to having two assists, Kinal blocked two shots.

Killian Kiecker-Olson, Maine (Fr., F; Andover, Minn.) Scored a power play and converted in the shootout during Maineâs Friday night 2-2 tie and shootout victory over #15/#17 Northeastern. Both were the first of his career.

Victor Ostman, Maine (Jr., G; Danderyd, Sweden) Recorded 34 total saves on the weekend. He posted 26 during Friday nightâs 2-2 draw and shootout win, including being perfect in the shootout. Ostman then came in to Saturdayâs game in relief and saved all eight shots he faced on 33:40 of work.

Hugo Ollas, MC (So., G; Linkoping, Sweden) Made 34 saves on 38 shots last weekend in a split series against #5 Massachusetts, including 18 in his win against Massachusetts on Saturday. He also recorded the secondary assist on the game-winning overtime goal.

Scout Truman, UML (Fr., F; Lethbridge, Ont.) Scored a pair of goals in Fridayâs 2-1 win over #9 Boston University at the Tsongas Center, his first career two-point performance. He added a team-best two blocks and finished with a plus-one rating. He currently ranks 28th in the conference in scoring with five points.

Henry Welsch, UML (Jr., G; Lakeville, Minn.) Stopped 32 shots and allowed just one goal against BU in his appearance between the pipes Friday night in a 2-1 win. He extended UMass Lowellâs win-streak to three games and moved to a 3-2-0 mark on the season. He currently ranks eighth in the conference in save percentage (.938) and GAA (2.01).

Craig Needham, PC (Sr., F; Medford, Mass.) Opened the scoring for the Friars in both games against UNH this weekend, notching his first two goals of the season. He also posted a plus-two rating and five shots on goal en route to help- ing the Friars to earn five points in league play.

Jaroslav Chmelar, PC (Fr., F; Nove Mesto nad Matuji, Czech Republic) Scored twice against UNH on Saturday, including the game-winning goal in the third period and finished the weekend with a plus-two rating. The freshman leads all Hockey East rookies with four goals this season.