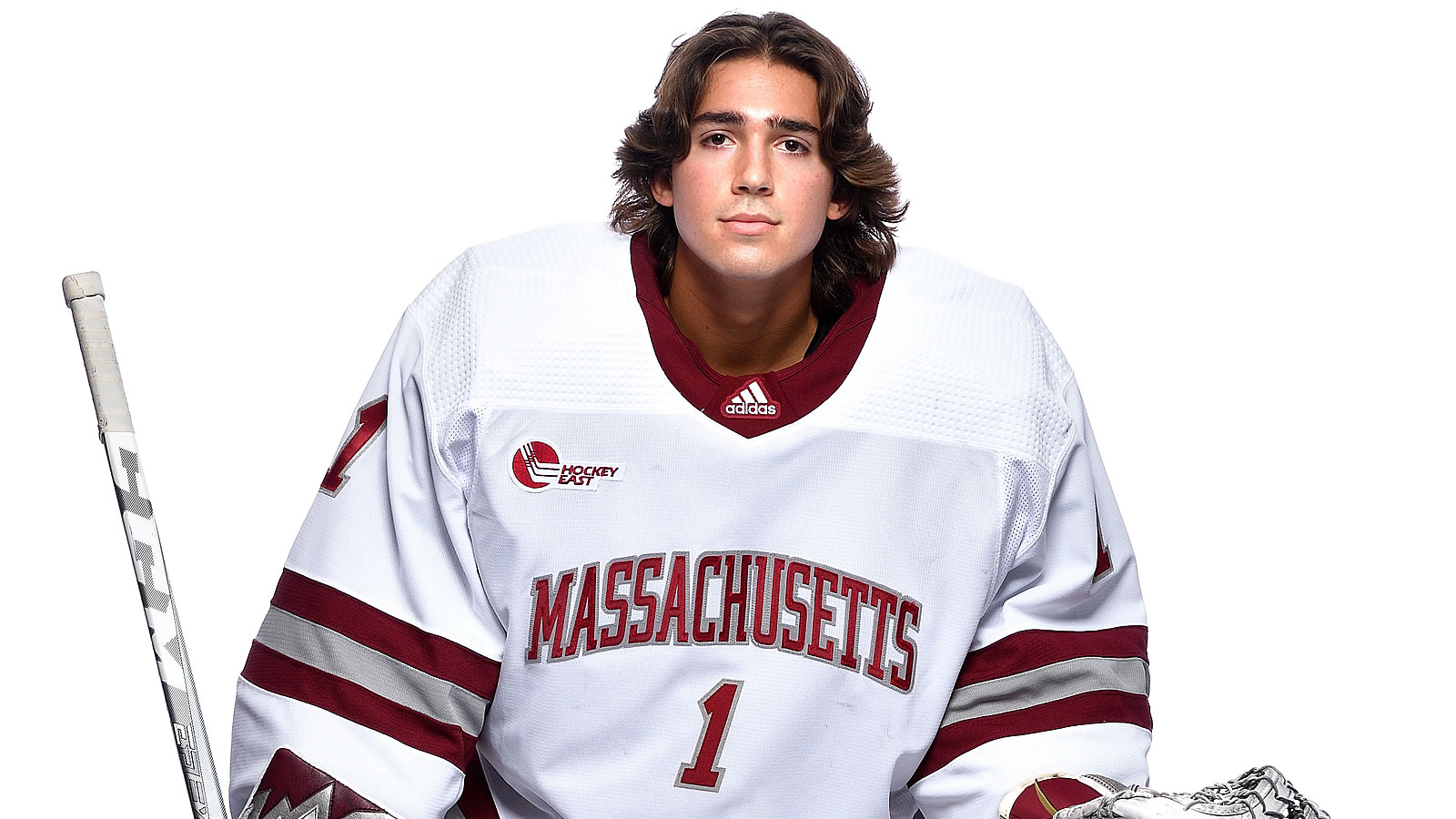 UMass swept defending national champions and top-ranked Denver in a two-game set in Amherst last weekend, toppling the Pioneers, 4-2 and 4-0. Sophomore goaltender Luke Pavicich stopped 75 of 77 shots he faced and pitched a 30-save shutout on Saturday. UMass posted its seventh and eighth all-time wins over a No. 1-ranked opponent and first-ever shutout of a No. 1-ranked foe.

UConn went 1-0-1 against #11 Ohio State, battling to a 0-0 draw on Friday before earning a convincing 6-1 win on Saturday. Jake Flynn anchored a defense that allowed just one goal and netted a tally of his own and three blocked shots in Saturdayâs victory. The Huskies are off to the best start in program history, sitting a 5-0-1 through six games.

Providence earned three points in Hockey East play, casting aside Northeastern, 2-1, in a Saturday road win. Rookie netminder Philip Svedeback kicked out a career-high 30 shots in the win while sophomore Riley Duran found the back of the net for his third goal of the weekend. The Friars also took a 5-2 win against Clarkson at home on Thursday.

Boston College earned a 4-2 win over New Hampshire in the Eaglesâ Hockey East opener. Senior defenseman Mitch Andres netted his first collegiate goal and added an assist on the game-winning strike for his first career multi-point game in the contest.

Luke Pavicich (So., G; Clarence Center, N.Y.) posted a pair of wins and stopped 75 of 77 shots against #1 Denver, backstopping the Minutemen to a weekend sweep of the Pioneers. He had 45 saves in Fridayâs 4-2 win, as both goals scored came with an extra Denver attacker, including a 6-on-4 opportunity. The sophomore followed up with a 30-save shutout, his first of his career, as UMass completed the weekend sweep of Denver with a 3-0 win. He posted a 1.00 goals against average and a .974 save percentage over 119:53 in net. 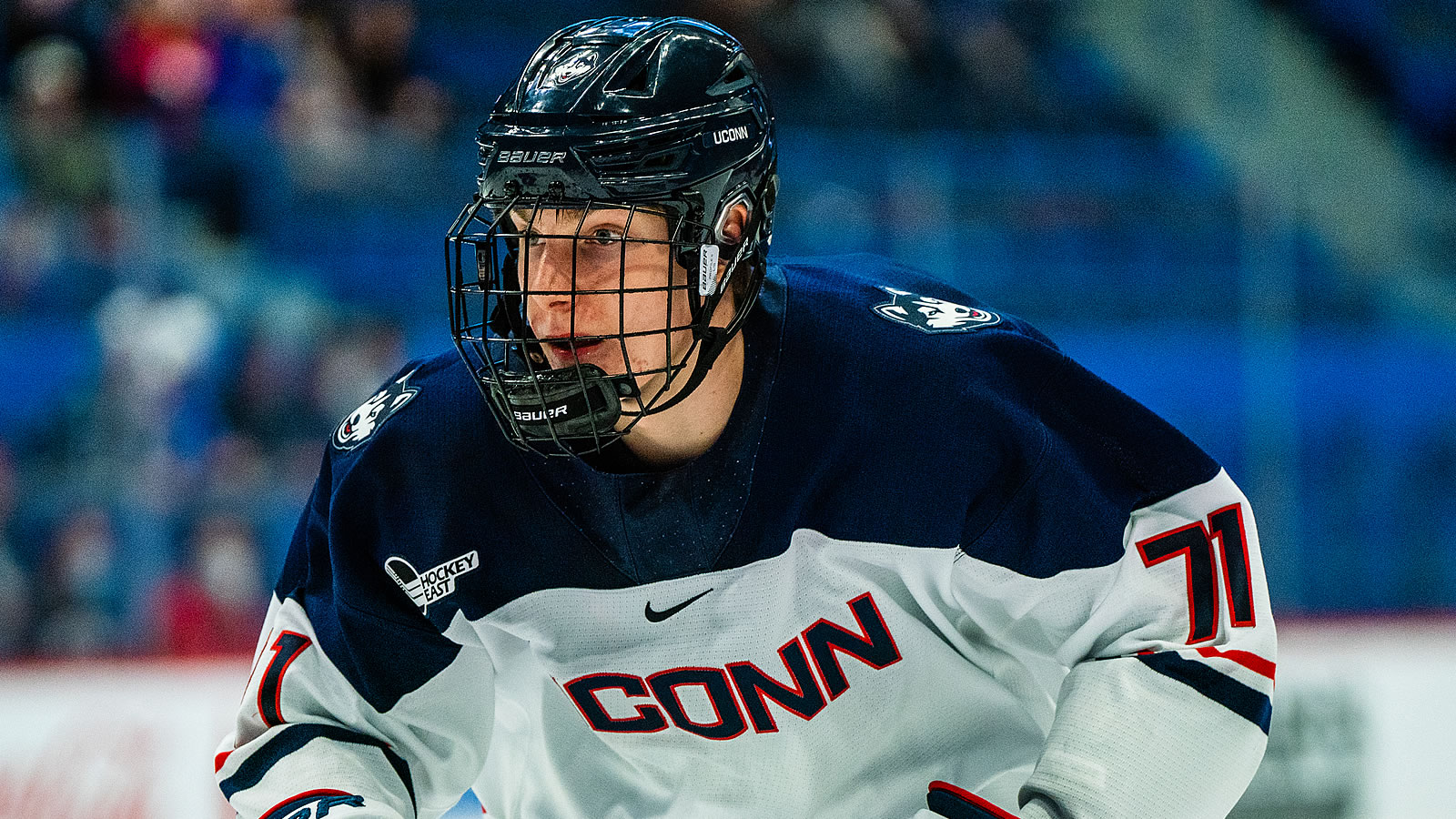 Matthew Wood (Fr., F; Nanaimo, B.C.) was instrumental in the Huskies unbeaten weekend against #11 Ohio State. After a 0-0 draw on Friday, Wood scored Saturdayâs opening goal to get the Huskies started, and assisted on two more goals in an eventual 6-1 win. Wood finished the weekend with three points and was plus-three. 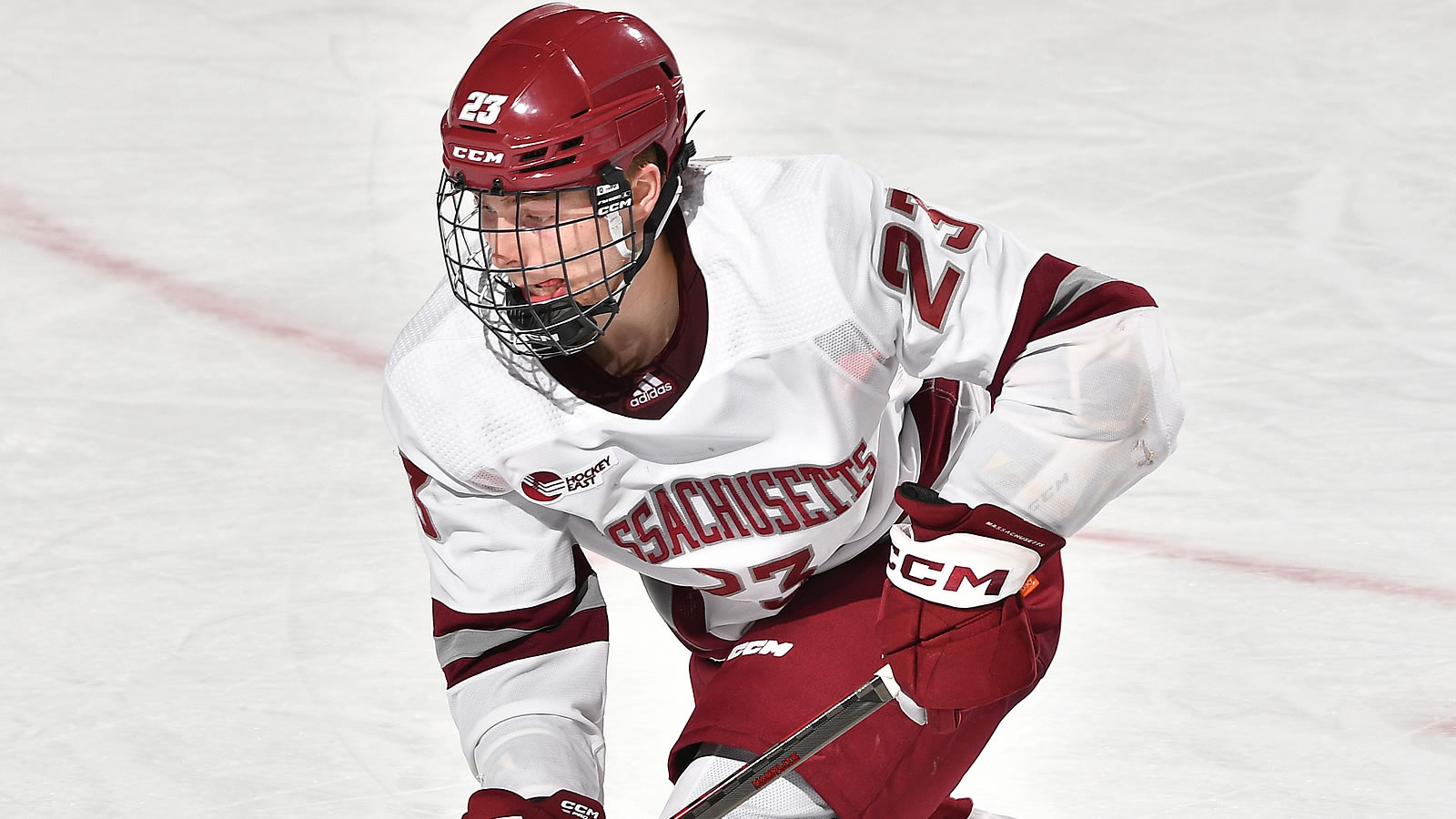 Scott Morrow (So., D; Darien, Conn.) scored in both games of a weekend sweep of #1 Denver, including a shorthanded goal while killing a five-minute major on Friday. He also dished an assist in that contest for a multi-point night and followed up by scoring the game-winner in Saturdayâs 3-0 shutout, UMassâ first-ever shutout of a No. 1-ranked team. Morrow had three points on the weekend (2g, 1a), took seven shots on net and was plus-three. 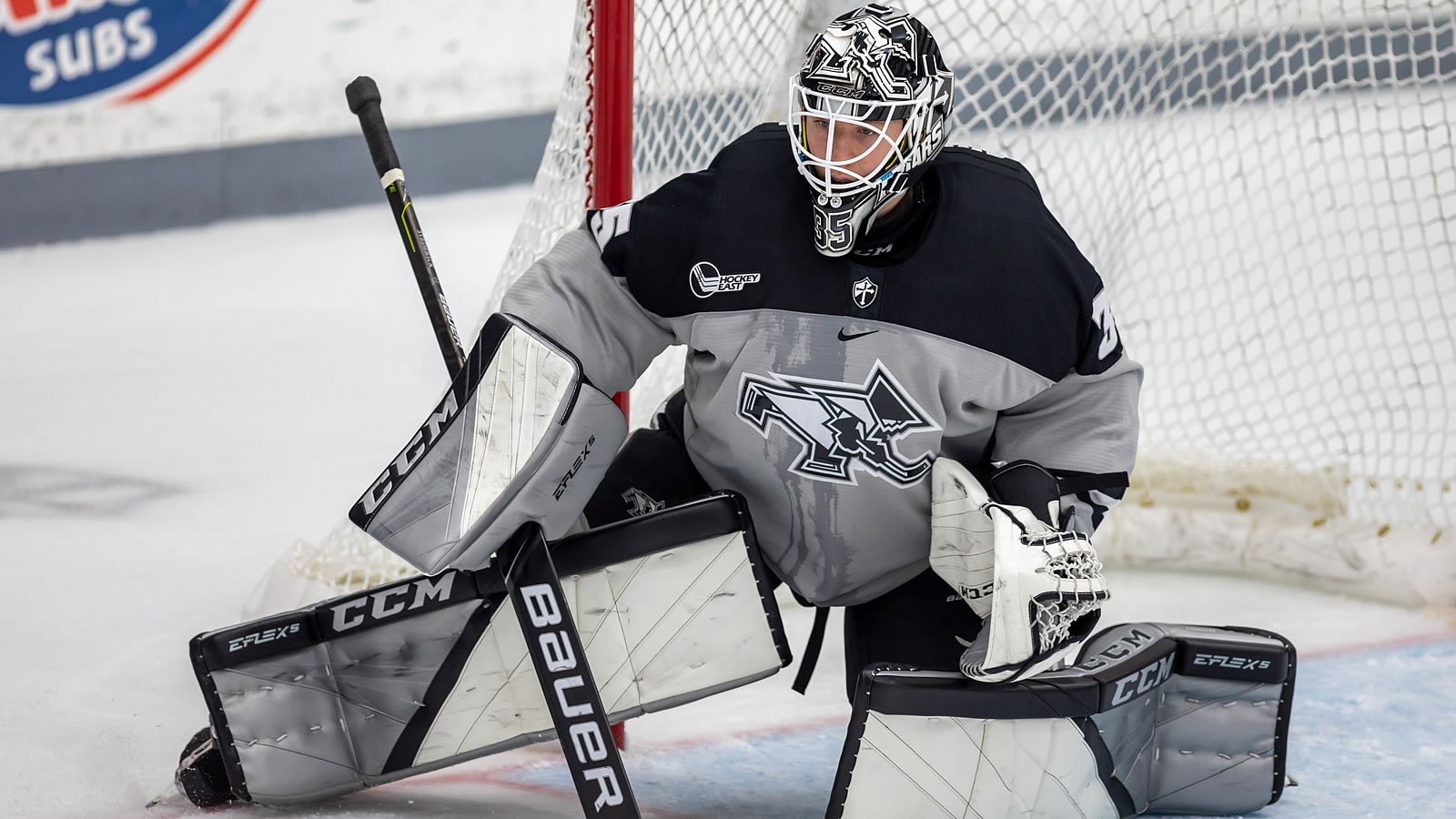 Philip Svedeback (Fr., G; Vaxjo, Sweden) stopped 54 of 57 shots faced over two wins this past week, including a career-high 30-save performance in Providenceâs 2-1 win at Northeastern on Saturday. SvedebÃ¤ck posted a 1.50 GAA and .947 save percentage over two games this week.

Colby Ambrosio, BC (Jr., F; Welland, Ont.) Scored twice in a 4-2 win over New Hampshire Saturday night to open Hockey East play. He tied for the team lead with four shots on net and finished plus-one.

Mitch Andres, BC (Sr., D; Brainerd, Minn.) Netted his first collegiate goal on Saturday in a 4-2 road win over UNH. He added an assist on the game-winning goal for his first career multi-point game and finished with a plus-two rating.

Mitch Benson, BC (Gr., G: Windsor, Ont.) Stopped 29 of the 31 shots he saw in a 4-2 road win over New Hampshire on Saturday night to earn his first career win as an Eagle.

Matt Brown, BU (Sr., F; Wood Ridge, N.J.) Sored the game-winning goal in the Terriersâ 3-2 win at #6 Michigan on Sunday, breaking a 2-2 tie with a power-play strike in the second stanza. Brown also provided the primary assist on the game-tying goal. In Fridayâs series opener, he added two primary assists. He finished the weekend with four points and currently leads the Terriers with five points (3g, 2a).

Ryan Greene, BU (Fr., F; Paradise, N.L.) Had the primary assist on Cade Webberâs goal in the Terriersâ 3-2 win at #6 Michigan on Sunday.

Domenick Fensore, BU (Sr., D; Thornwood, N.Y.) Factored on the final two goals of the game to help BU skate away with a 3-2 win at #6 Michigan on Sunday. His second-period strike evened the score at 2-2 before he assisted on Matt Brownâs winner later in the frame. He also blocked three shots in the victory. Fensore, who also had an assist on Friday, has recorded a point in all three Terrier games, ranking second on the squad with four points (1g, 3a).

Jake Percival, UConn (Fr., F: Avon, Conn.) Found the back of the net in the Huskies 6-1 victory over Ohio State and finished plus-two on the weekend.

Jake Flynn, UConn (Sr., D; Bridgewater, Mass.) Anchored a defense that allowed just one goal to #11 Ohio State. Flynn also netted a goal in Saturdayâs 6-1 win over the Buckeyes and finished with three blocked shots and a plus-three rating.

Logan Terness, UConn (So., G; Burnaby, B.C.) Stopped a career high 43 shots in a 0-0 draw against #11 Ohio State and denied six power-play opportunities for the Buckeyes.

Kenny Connors, UMass (Fr., F; Glen Mills, Pa.) Opened the scoring for the Minutemen with a shorthanded goal in Fridayâs 4-2 win over Denver and dished an assist for first two collegiate points and was plus-two. He won 15-of-28 faceoffs on the weekend (53.6%).

Brian Chambers, UML (Sr., F; Weymouth, Mass.) Posted a career-weekend against Michigan State, finishing the two-game series with one goal, two assists, a plus-one rating and three blocks. In Thursdayâs 4-3 setback, Chambers registered a goal and an assist for UMass Lowell and won eight out of his 15 faceoffs. He returned to the ice for the River Hawks on Friday, adding an assist to his weekend total as well as three blocks and 14 faceoff wins in his 21 attempts.

Jon McDonald, UML (Gr., D; Livonia, Mich.) Led the River Hawks with two points in the teamâs 3-2 win over Michigan State Friday night. He netted the eventual game-winning goal Friday night on the power play and sadded an assist to his stat line in the win. Finished the two-game series with five blocked shots.

Henry Welsch, UML (Jr., G; Lakeville, Minn.) Posted a career-high 38 saves in the River Hawksâ 3-2 win over Michigan State Friday night ... Made 22 third-period saves to help clinch the non-conference victory for UMass Lowell ... Finished with 2 GAA and a .950 save percentage.

Riley Duran, PC (So., G; Woburn, Mass.) Led all Hockey East players with three goals over two games last week and finished tied for the lead in plus/minus with a plus-three rating. He scored twice in Providenceâs 5-2 win over Clarkson on Thursday and added another goal in the Friarsâ 2-1 win on the road at Northeastern on Saturday.