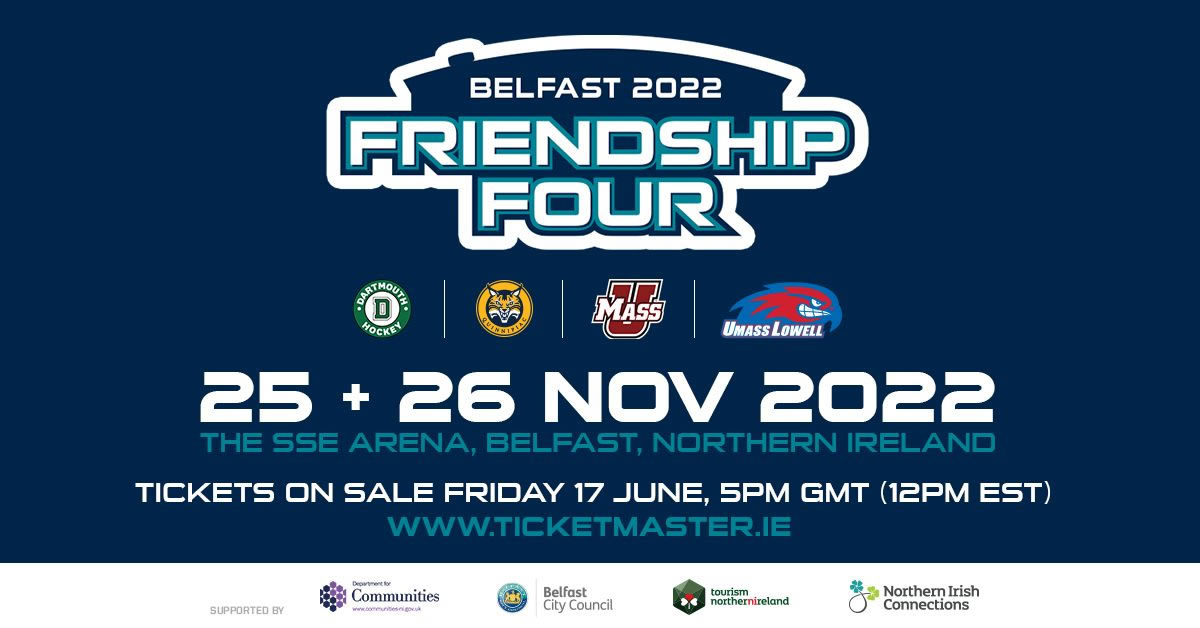 BELFAST, Northern Ireland - Returning to The SSE Arena, Belfast in November 2022, the high-profile four-game tournament is the first and only National Collegiate Athletic Association (NCAA) hockey tournament to take place outside of the United States.

Four top U.S. college hockey teams â UMass Lowell River Hawks, Massachusetts Hockey (UMass), Quinnipiac Bobcats and Dartmouth Big Green â will come together to compete for the coveted Belpot trophy over Thanksgiving weekend on Friday 25 and Saturday 26 November 2022. Three of the four are returning teams: The UMass Lowell River Hawks were winners of the first ever Friendship Four in 2015; while the Quinnipiac Bobcats and Massachusetts Minutemen played in the 2016 tournament. Dartmouth Big Green will make their debut on Belfast ice in this yearâs Friendship Four.

Supported by the Department for Communities, Belfast City Council, Tourism NI and NI Connections, the Friendship Four is a firm fixture in international ice hockey calendar, spearheaded by the team at the Odyssey Trust.

The Friendship Four was born in Belfast in 2015, marking the start of a highly popular international ice hockey tournament that continues to grow to this day. Created and developed by The Odyssey Trust to promote social welfare and community engagement in Northern Ireland, building on the sister cities agreement between Belfast and Boston, the tournament last took place in Belfast in 2019, with a brief hiatus due to the Covid-19 pandemic.

Commenting on the announcement, Martin McDowell, Chairman, The Odyssey Trust said: âWe are pleased to officially begin the countdown for the highly anticipated return of the Friendship Four this November. Building on a strong legacy of international collaboration, the Friendship Four will deliver two packed days of sport, entertainment, community outreach and engagement activities. The tournament uses sport as a means to engage and inspire young people and has a far-reaching impact, bringing communities together, forging friendships and understanding, whilst promoting the concept of fair play and respect for all.â

For local hockey and sports fans, the tournament provides a rare opportunity to see four top U.S. college hockey teams go head-to-head in high octane live sport action in the heart of Belfast. With a reputation for providing a pipeline of top talent into the NHL and national Leagues around the world, NCAA hockey is known and loved for its high-energy and fast pace, which is sure to impress local crowds. The tournament has also proven to be a strong scouting opportunity for the Belfast Giants in the past, with Scott Conway and Jeff Baum just two of the names to have first played in Belfast during the Friendship Four.

The Friendship Four weekender kicks off at 2pm on Friday 25 November, with Dartmouth Big Green taking on the Quinnipiac Bobcats in the tournament opener, followed by Massachusetts Hockey vs rivals, UMass Lowell River Hawks at 7pm. On Saturday 26 November, the third and fourth seeded teams will vie for third place at 3pm, with the big Championship final game following at 7pm.

About the Friendship Four

The Friendship Four was born in 2015, off the back of the Sister Cities agreement in 2014, helping to build links between Belfast and Boston through the medium of sport.

The highly popular international ice hockey tournament, created and developed by The Odyssey Trust continues to grow to this day.

The tournament was created to promote education, social welfare, and community integration in Northern Ireland, building on the sister cities agreement between Belfast and Boston.

Previous winners of the Friendship Four are:

More about the 2022 Friendship Four teams:

Coming off a 2022 NCAA Tournament run, the UMass Lowell River Hawks are returning to Belfast for the second time after winning the inaugural Belpot in 2015. The three-time Hockey East Tournament Champions are led by Head Coach Norm Bazin, who enters his 12th season at the helm. Under his tutelage, the River Hawks have been crowned regular season champions twice and have seen six NCAA tournament appearances, including one Frozen Four appearance in 2013.

Quinnipiac Menâs Ice Hockey enters the 2022-23 season as the defending ECAC Hockey regular season champions. The Bobcats return sophomore goaltender Yaniv Perets who was the ECAC Player and Goaltender of the Year in 2022 and was a finalist for the Mike Richter Award. Perets is joined by a group of five grad- uate students who will return to play a fifth year with the Bobcats as they aim for an 8th NCAA Tournament appearance since 2013. This will be the second Friendship Four outing for Quinnipiac, having last played in the tournament in 2016.

The Minutemen are entering the 2022-23 season as the two-time defending Hockey East Champions and will be making their second trip to the Friendship Four, last playing in Belfast in 2016. The 2021 National Champions are led by head coach Greg Carvel who in six years has put Massachusetts Hockey on the national landscape with the development of Hobey Baker winner Cale Makar, Hockey East player of the year Bobby Trivigno, and numerous players moving onto the NHL.

One of the oldest programs in NCAA Ice Hockey, Dartmouth is entering its 115th season of play in 2022-23. Reid Cashman starts his third year at the helm of the Big Green after taking over the program in June 2020. Competing in the Friendship Four for the first time, the Big Green return 13 forwards, six defensemen and one goaltender, captained by senior defenseman Tanner Palocsik.