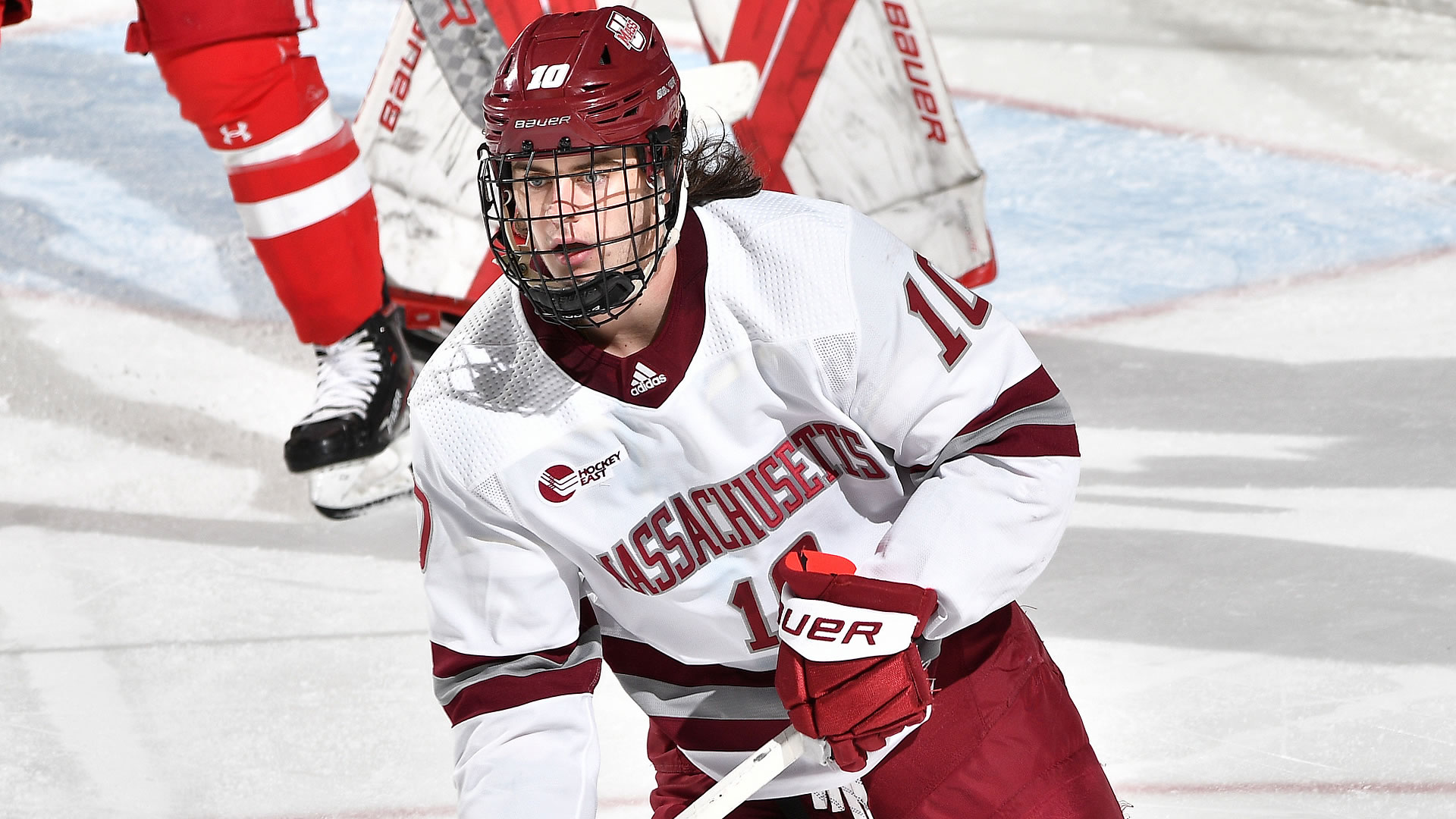 The top four seed as will meet in the Hockey East Semifinals at TD Garden for the first time since 2018 after Northeastern, Massachusetts, UMass Lowell, and UConn all advanced through their quarterfinals on Saturday.

Northeastern toppled Boston College, 3-2, off the back of a three-goal second period. Huskiesâ sophomore forward Gunnarwolfe Fontaine posted a goal and an assist while Devon Levi made 46 saves to deny a third-period push from the Eagles, who fired 25 shots on net in the final frame alone.

Massachusetts jumped out to a 3-0 lead over Providence, including two first-period goals from Josh Lopina, and got 45 saves from Matt Murray to hold on for a 4-2 victory over Providence and advance to the Hockey East semifinals for the third tournament in a row.

UMass Lowell earned the seventh trip to the Hockey East semifinals under head coach Norm Bazin since 2013 and are looking for their fourth Hockey East Tournament title. The River Hawks marched to a 7-2 victory over Merrimack on home ice on the back of six different goal scorers and two from Carl Berglund.

UConn earned the first Hockey East Tournament victory in program history with a 3-1 win over Boston University in their 10th postseason outing. Graduate goaltender Darion Hanson stopped 38 shots, including 19 in the third period, to backbone the Huskies to their first-ever appearance in the Hockey East semifinals.

Josh Lopina (So., F; Minooka, Ill.) factored in all four goals in UMassâ 4-2 Quarterfinal win over Providence, scoring the first two goals of the game. One of his strikes came on the power play. He also dished out two assists, including on the game-winning goal, and won 16 of 31 faceoffs. 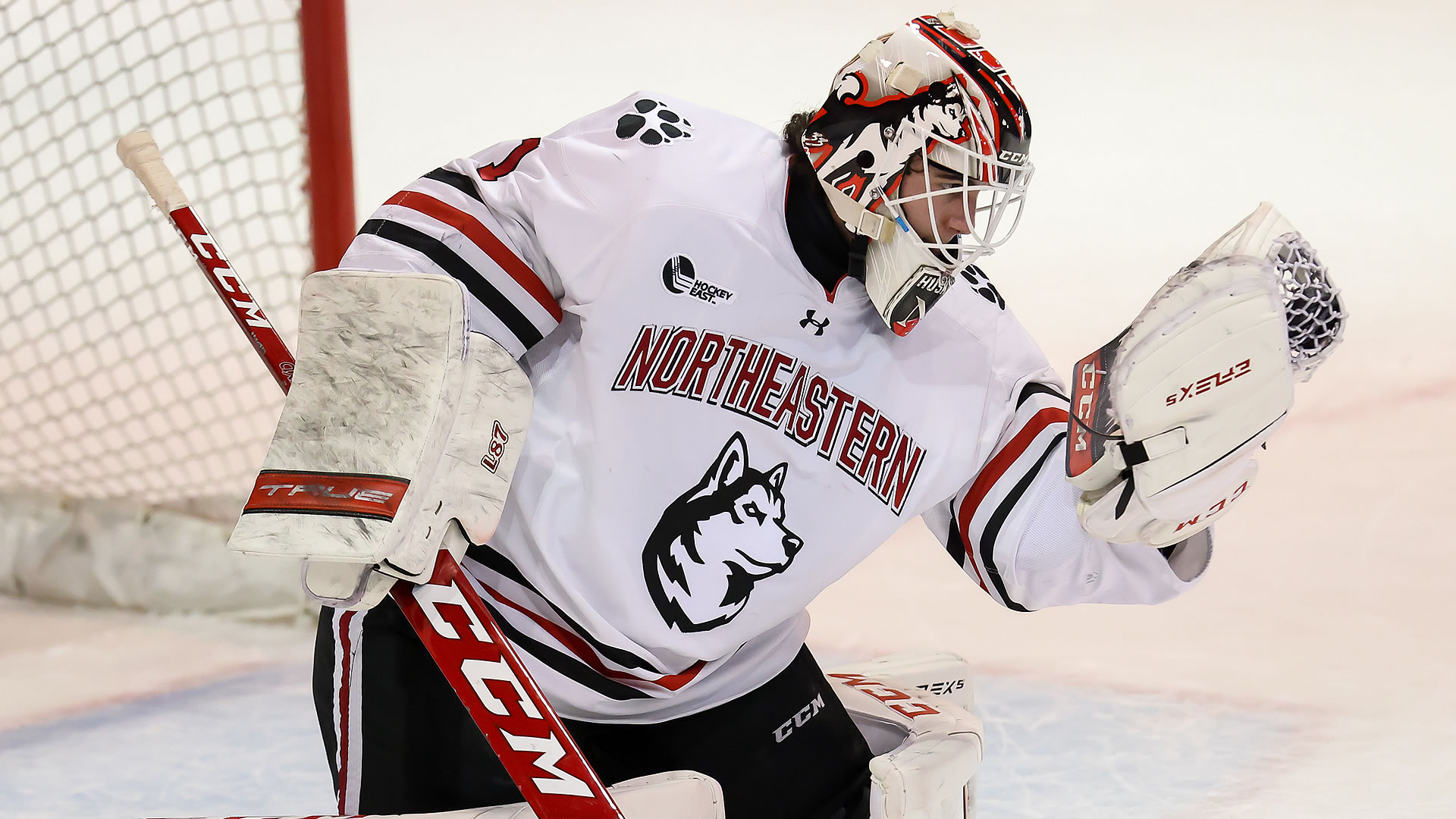 Devon Levi (So., G; Dollard-Des-Ormeaux, Que.) notched 46 saves in Northeasternâs 3-2 victory over BC in the Quarterfinals. Levi allowed just one even strength goal in the outing and made several key saves down the stretch to preserve the 3-2 win, as he faced 25 shots in the third period alone. 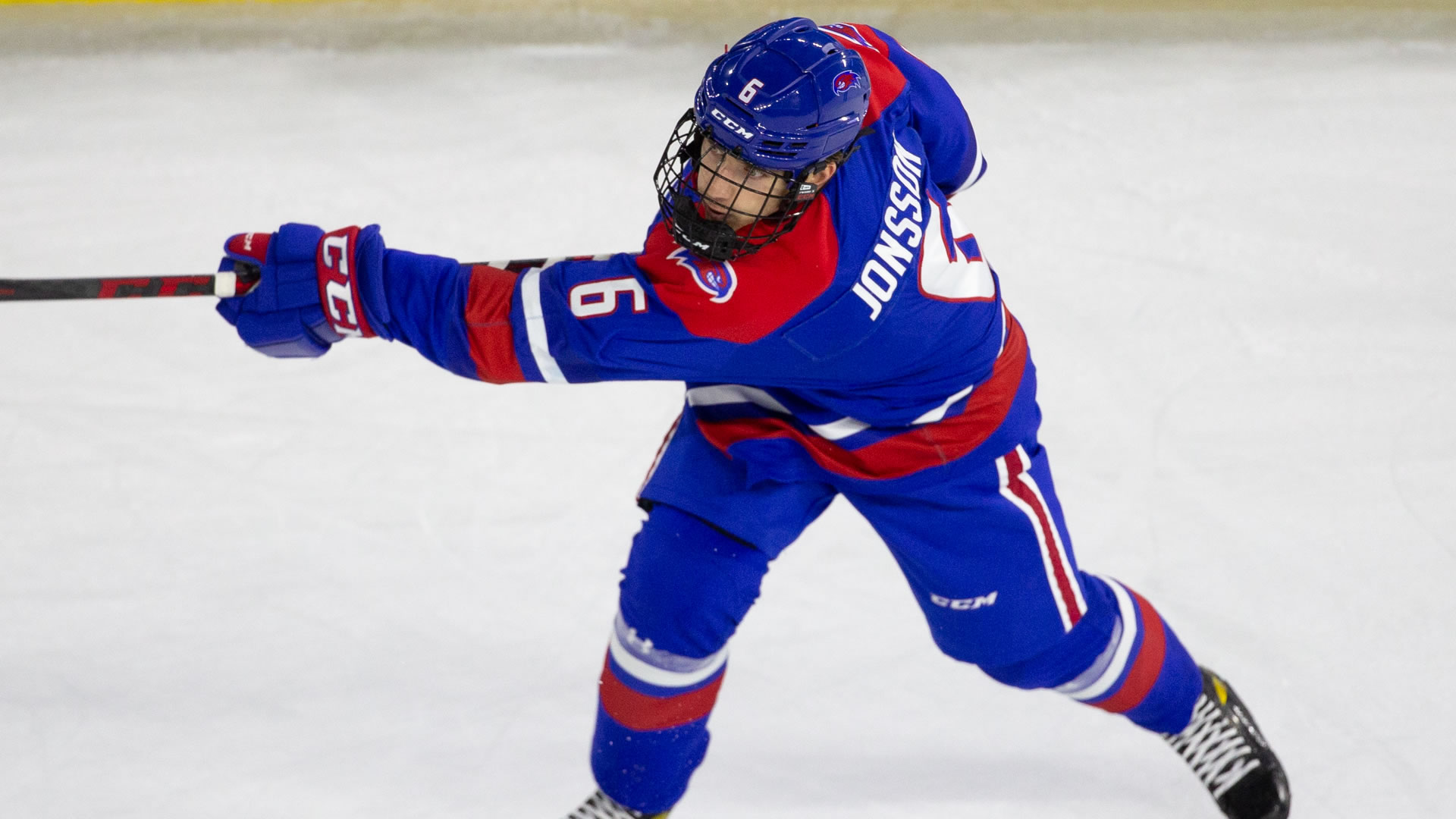 Isac Jonsson (Fr., D: Angelholm, Sweden) dished out three assists to help the No. 3 seed River Hawks take down No. 6 seed Merrimack in a 7-2 decision. His three-point night marked a career and season-high for the freshman defenseman. Jonsson ended the night with a team-best plus-five rating. 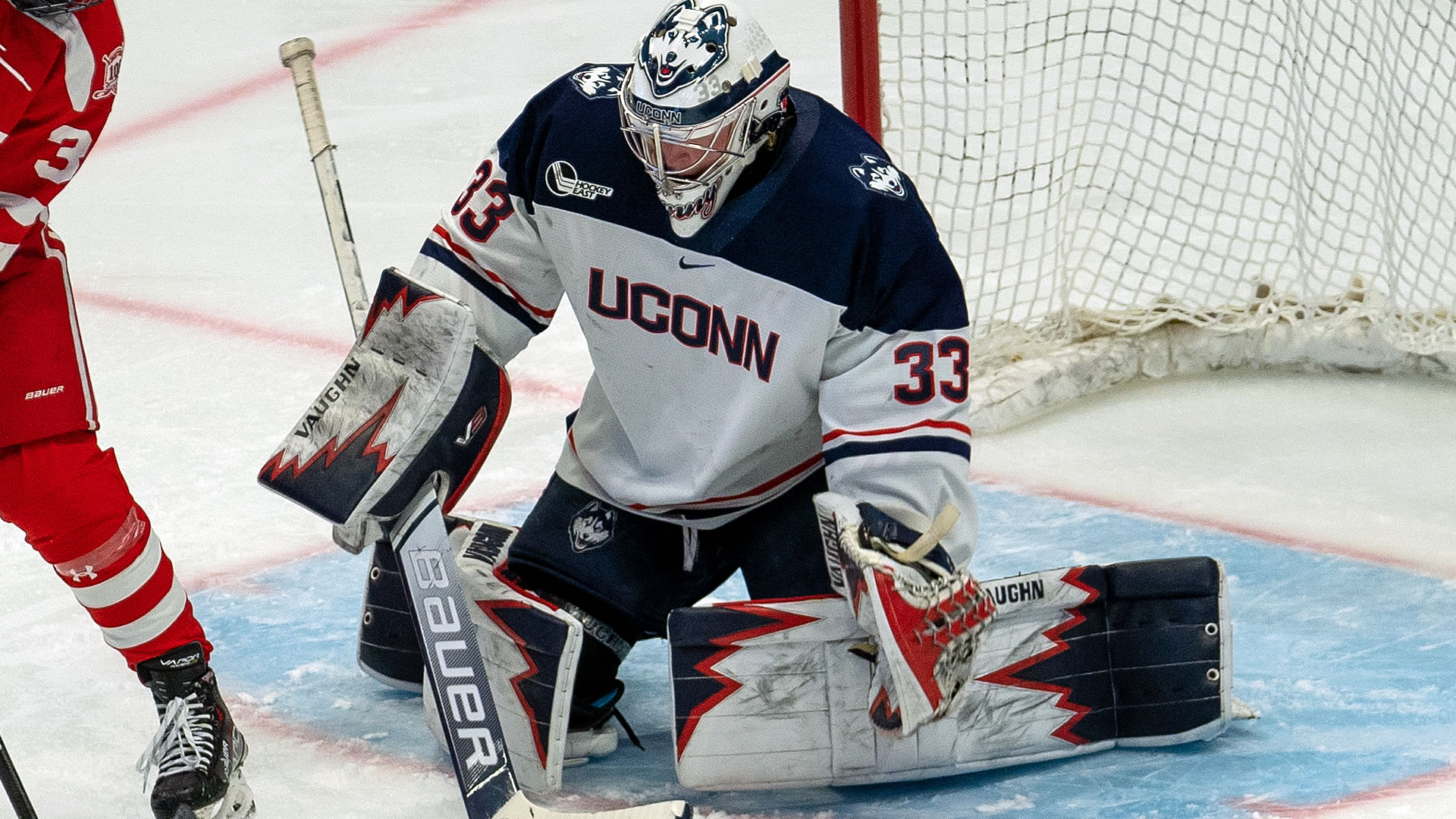 Darion Hanson (Gr., G; East Bethel, Minn.) made 38 saves, his second highest total this year, in his Hockey East playoff debut to beat BU, 3-1, in the quarterfinals. Hanson stopped 19 shots in the third period as the Terriers were looking to erase a 2-0 UConn lead. He then got a secondary assist on the Huskies empty net goal to seal off the win, his second assist this year. Hanson earned his 19th win of the season, setting a new UConn Division I school record for goalie season wins.

Jack McBain, BC (Sr., F; Toronto, Ont.) Scored a goal and added two assists in the Eaglesâ 4-3 overtime win over New Hampshire in Wednesdayâs opening round contest. He dished out another helper in a quarterfinal set back to Northeastern. On Monday, he was named a finalist for Hockey East Player of the Year.

Marc McLaughlin, BC (Sr., F; North Billerica, Mass.) Netted two goals, including the overtime game-winner, in the Eaglesâ 4-3 overtime win over New Hampshire in Wednesdayâs opening round contest. He also added an assist in each of Boston Collegeâs playoff games.

Marc Gatcomb, UConn (Sr., F; Woburn, Mass.) Gatcomb had a pair of assists and blocked a shot in the Huskies 3-1 win over BU in the quarterfinal round. Gatcomb had the assist on the Jonny Evans game-winner and then set up the empty net goal with 10.5 second left to seal it.

Chase Bradley, UConn (Fr., F; St. Louis, Mo.) After missing the previous six games with an injury, Bradley returned to the lineup and had the empty net goal with 10.5 seconds left to seal off a 3-1 quarterfinal win over BU.

Jake Flynn, UConn (Jr., D; Bridgewater, Mass.) Set up the Huskies first goal, blasting a shot that was tipped by Vladislav Firstov in the first period to give UConn a 1-0 lead on the road to a 3-1 quarterfinal win, UConnâs first in program history. Flynn also blocked a pair of shots in the win.

Carl Berglund, UML (Jr., F; Hammaro, Sweden) Netted a season-high two goals in the River Hawksâ 7-2 victory over the No. 6 seed Merrimack. He finished the night with a plus-two rating.

Brehdan Engum, UML (So., D; Burnsville, Minn.) Picked up an assist in the River Hawks 7-2 win over Merrimack to punch UMass Lowellâs ticket to the Hockey East Semifinals. He ended the night with a team-best plus-five rating alongside teammate Isac Jonsson.

Owen Savory, UML (Sr., G; Cambridge, Ont.) Made 39 saves and allowed just two goals in the River Hawksâ 7-2 win against Merrimack for a .951 save percentage on the night. His 39 saves marked season-high for the senior goaltender as well as a career-high while in a River Hawksâ uniform.

Justin Hryckowian, NU (Fr., F; LâÃle-Bizard, Que.) In his return from injury for the first time since Feb. 7, notched a goal in Northeasternâs 3-2 win over Boston College.