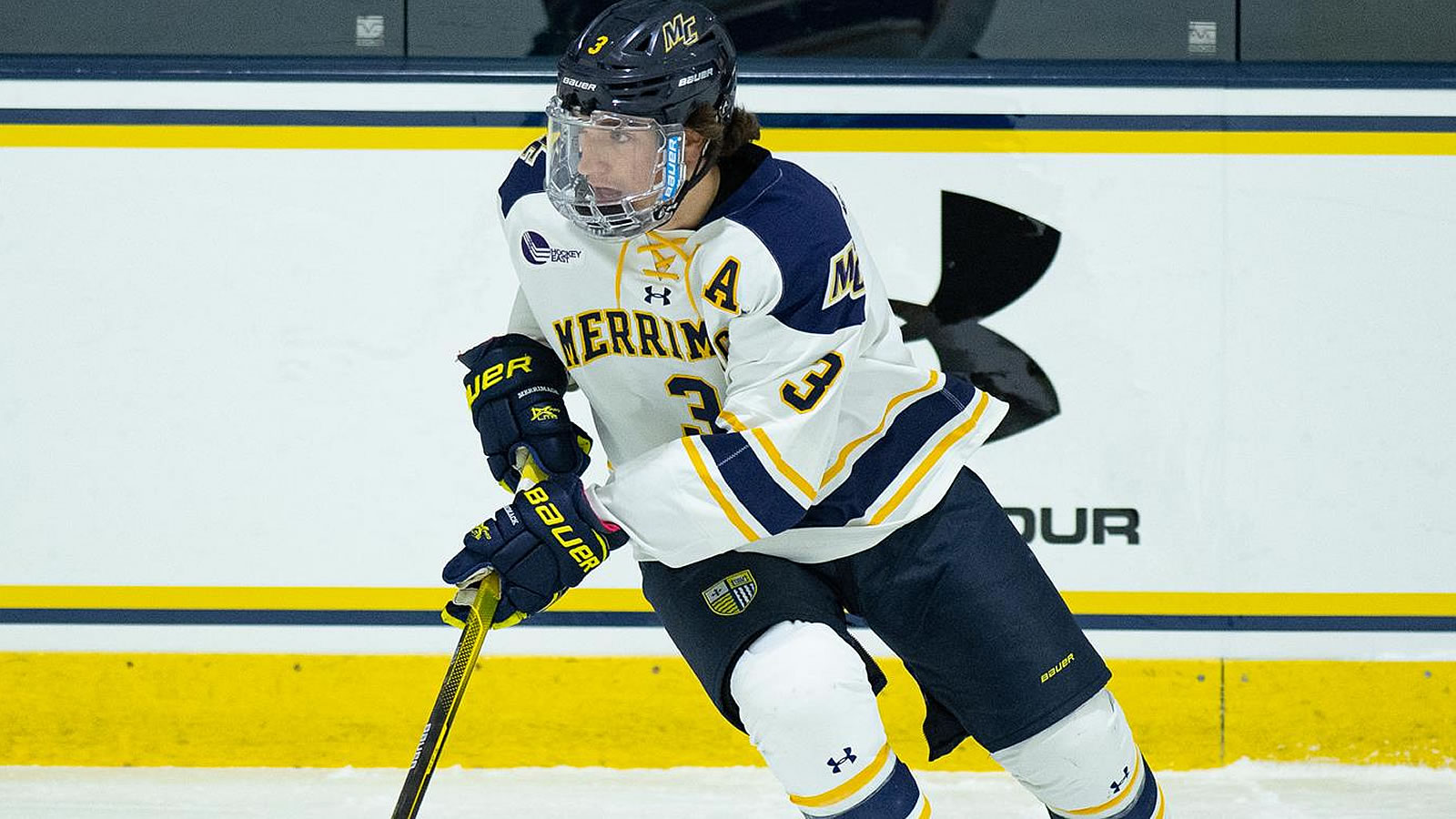 New Hampshire swept #20 Boston College, improving to 5-3-0 on year against ranked opponents. Reigning Defensive Player of the Year Colton Huard picked up Pro Ambitions Rookie of the Week nod after he posted two goals and one assist in the effort. He is now on a four-game point streak with three goals and five assists for eight points during that span.

Merrimack swept #17 Providence thanks in part to goaltending from Co-Goaltenders of the week Zachary Borgiel and Hugo Ollas, who shared duties and each picked up a victory. Declan Carlile scored two goals from the back end, including the game-winner in the third period of Fridayâs 3-2 triumph.

UMass Lowell extending its winning streak to five games with a weekend sweep of Maine at home. Zach Kaiser finished the weekend with three points on a goal and two assists. He registered a plus-three on-ice rating and recorded two blocks in the two-game series against the Black Bears.

Jay O'Brien scored just eight seconds into overtime to lift Boston University to a 2-1 victory at UConn in a one-game set Friday. In addition to his game-winning heroics, OâBrien led the Terriers in both shots on goal (4) and blocked shots (3). He has now notched three goals and five assists for eight points since returning to the lineup on Dec. 31.

Declan Carlile (Jr., D; Hartland, Mich.) showed up the scoresheet in a weekend sweet over #17 Providence to continue his dominant junior season. He scored two goals from the back end, including the game-winner in the third period of Fridayâs 3-2 win and the opening goal just a few minutes in to Saturdayâs eventual 2-1 triumph. He also compiled a plus-three rating on the weekend and nine blocked shots, including seven Saturday. His plus-17 rating for the season leads all skaters in Hockey East and his 46 blocked shots leads the league as well and ranks him sixth in the nation. 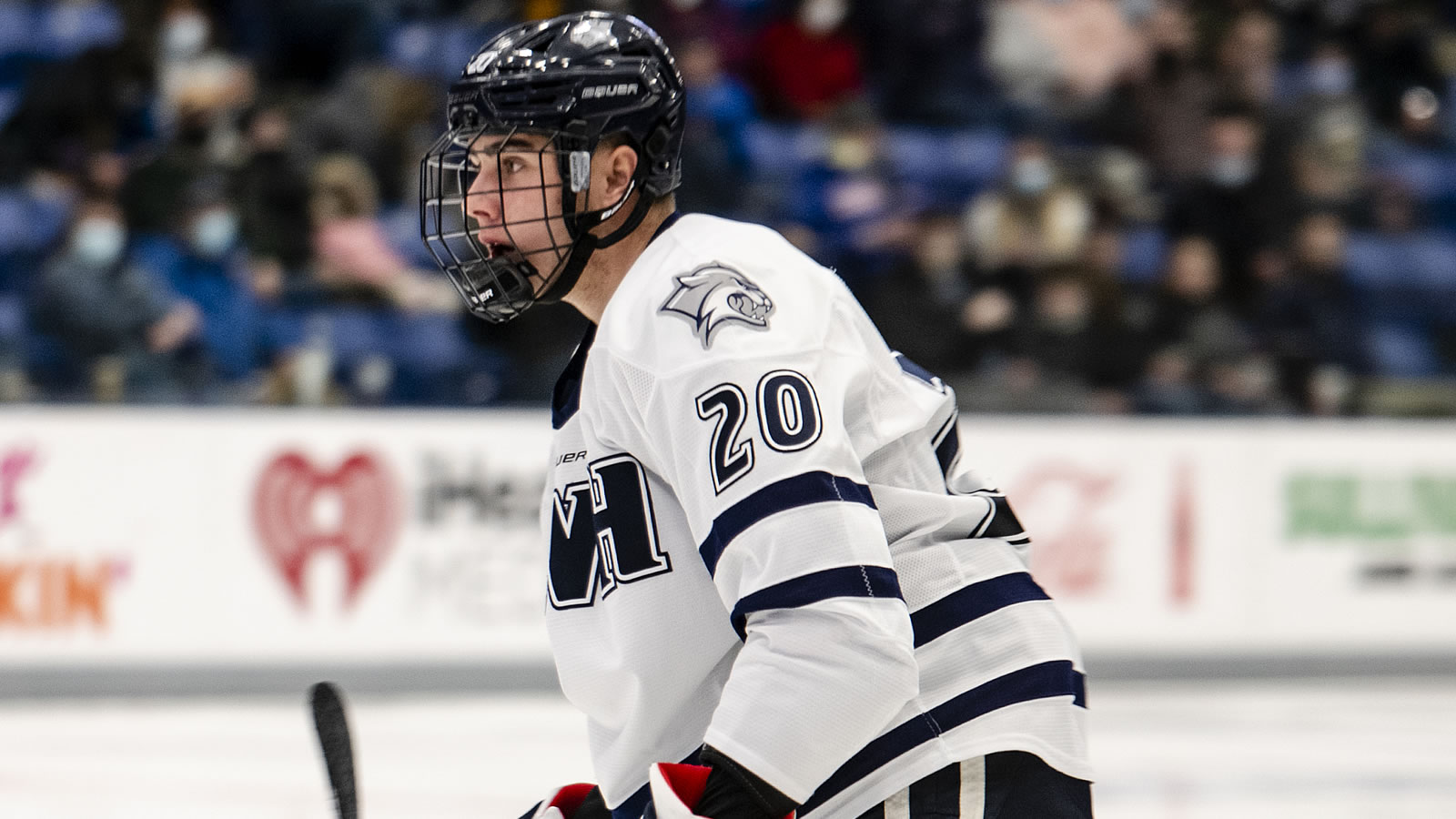 Colton Huard (Fr., D; Foothill Ranch, Calif.) posted two goals and one assist for three points as UNH swept #20 Boston College. He was also a member of a defense that only allowed four goals on the week. With the game tied at 1-1 on Friday, Huard scored to give the Wildcats a 2-1 lead in the third period as UNH would go on to win 3-2. Then on Saturday, he gave UNH a 2-0 lead in the first period and posted an assist on the Wildcatsâ fourth goal as UNH won 5-2. Huard now has a four-game point streak with three goals and five assists for eight points during that span. 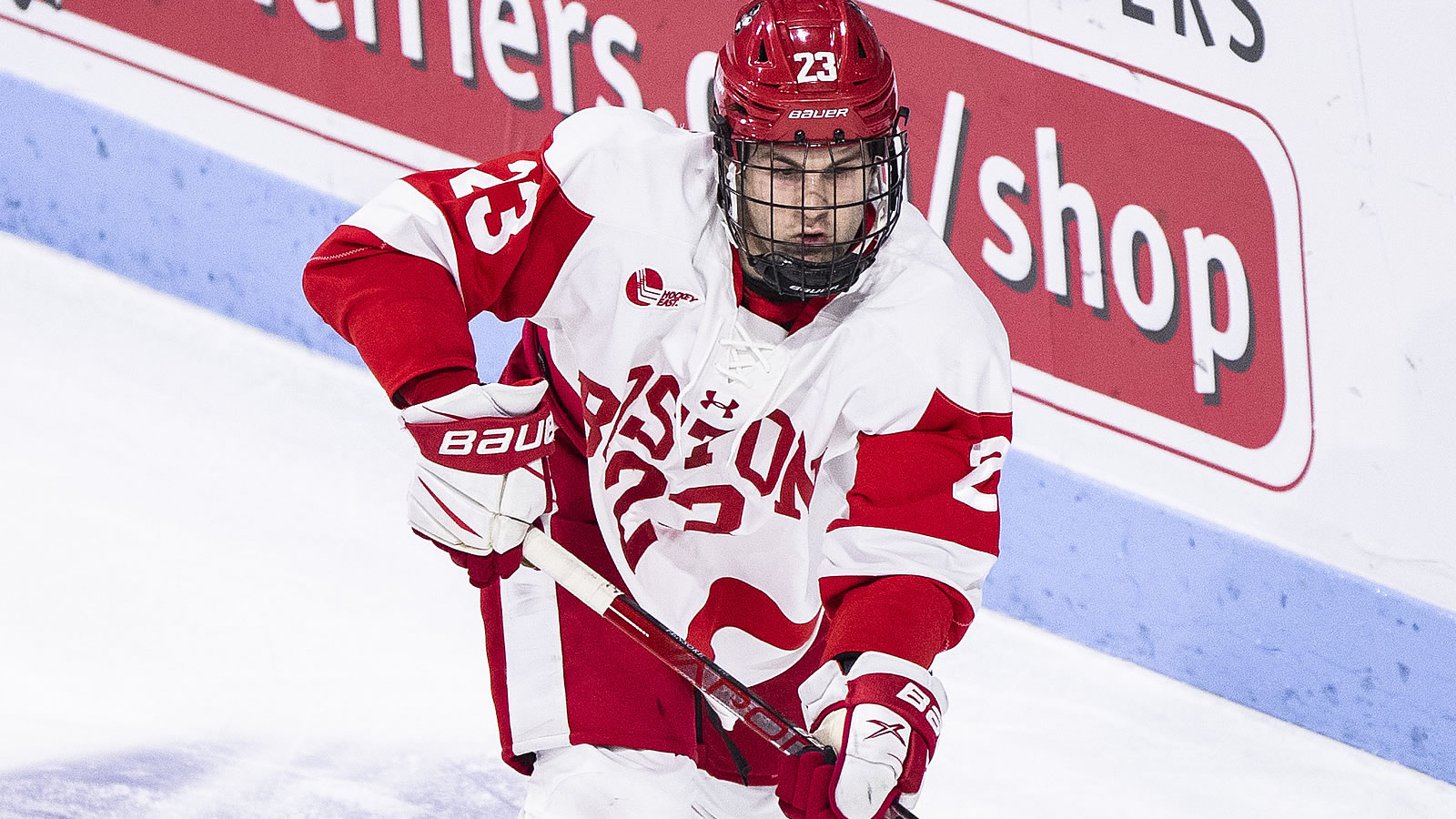 Dom Fensore (Jr., D; Thornwood, N.Y.) assisted on his teamâs opening goal when he backchecked in the neutral zone and forced a turnover that directly led to Matt Brownâs tally. Fensore finished the game with two blocked shots and logged his most minutes on-ice at the end of the contest to preserve a 1-1 score to force overtime. He made a great diving play to save a potential goal and was noticeable in all three zones. Fensore extended his point streak to three games and has now recorded a point in eight of his last nine games.

HOCKEY EAST CO-GOALTENDERS OF THE WEEK 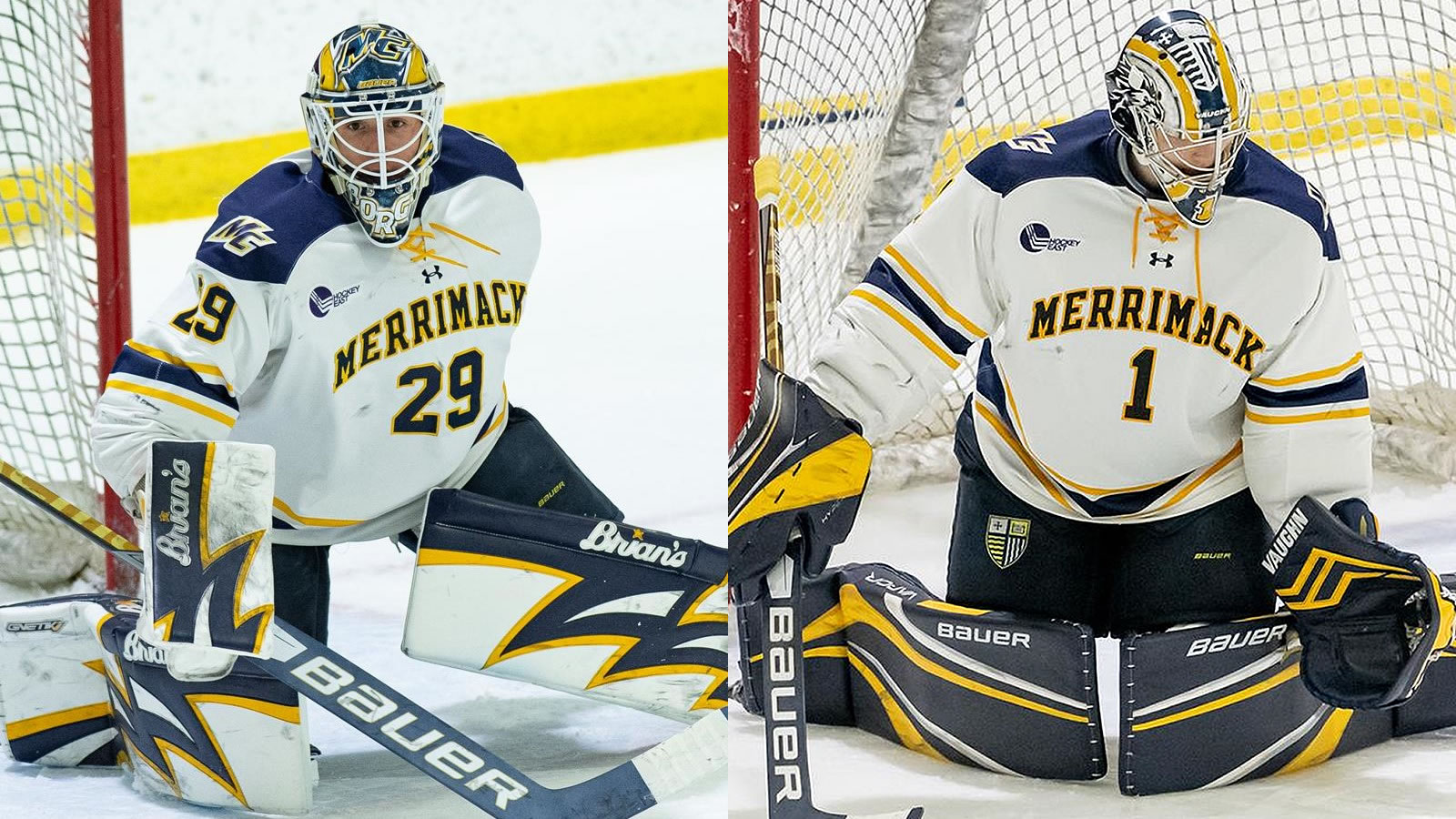 Zachary Borgiel (So., G; Fort Gratiot, Mich.) earned the win in a 2-1 decision over #17 Providence at Schneider Arena on Saturday, completing Merrimackâs sweep of the Friars. He made a season-high 33 saves in the victory, including 26 in a row to close out the game.

Jay O'Brien, BU (Jr., F; Hingham, Mass.) Scored just eight seconds into overtime to lift the Terriers to a 2-1 victory at UConn. In addition to his game-winning heroics, OâBrien led the Terriers in both shots on goal (4) and blocked shots (3). The junior pushed his point streak to four games and has scored a goal in three straight contests. After missing the final three games of the first semester, OâBrien has notched three goals and five assists for eight points since returning to the lineup on Dec. 31.

Drew Commesso, BU (So., G; Norwell, Mass.) Made 25 saves in a 2-1 overtime win at UConn. He was particularly sharp in the second stanza, as he stopped all 14 shots he faced in that span, making a few timely saves along the way. Commesso owns a 1.46 goals-against average and a .950 save percentage in his six starts during the Terriersâ current seven-game unbeaten streak.

Zach Kaiser, UML (Jr., F; Orangeville, Ont.) Finished the weekend with three points on a goal and two assists to help the River Hawks complete a weekend sweep over Maine and extend their winning streak to five. He registered a plus-three on-ice rating and recorded two blocks in the two-game series against the Black Bears.

Ben Meehan, UML (So., D; Walpole, Mass.) Had one goal and one assist to help the River Hawks complete the season sweep over Maine. The blueliner registered a plus-one rating and two blocks across the two-game series.

Owen Savory, UML (Sr., G; Cambridge, Ont.) Picked up two wins against the Black Bears to help the River Hawks complete the season sweep against Maine and move his personal record to 10-1-1 on the year. He allowed just six goals on 57 shots faced for a .895 save percentage. Three of the six goals allowed came on the power-play. The Hobey Baker nominee ranks second overall in the conference in save percentage and GAA and third in the nation in SV % and fifth in GAA.

Liam Walsh, MC (Jr., F; Bridgeville, Pa.) Helped lift Merrimack to a weekend sweep over #17 Providence when he scored and added an assist Friday, then had the primary assist on the Warriorsâ opening goal of the game Saturday. Both his points Friday came within two minutes of each other.