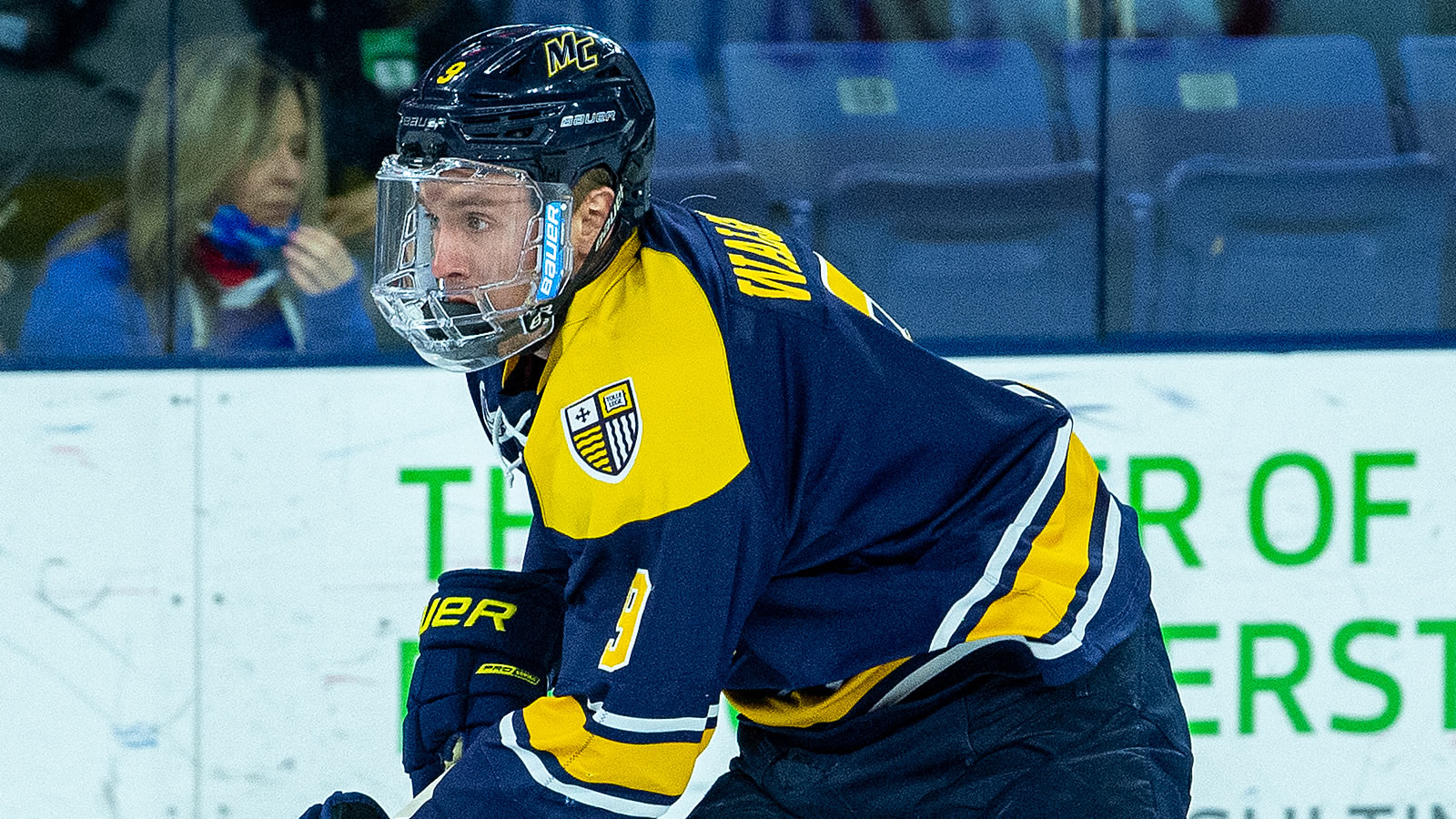 Merrimack completed its second consecutive weekend sweep of a nationally ranked opponent, winning twice over #9/10 UMass Lowell after handling then-#17 Providence. Liam Walsh had four points to lift the Warriors, including a pair of assists, including one on Declan Carlileâs game-winning goal Friday, then netted two power-play markers on Saturday, which also included the game-winner in the third.

Massachusetts swept #12/13 Northeastern, including an impressive 6-0 shutout at Matthews Arena on Saturday. Scott Morrow had two assists and earned a plus-five rating, including setting up Fridayâs game winner. Matt Murray stopped 53 of 55 shots and collected his 14th career shutout with 27 saves in Saturdayâs road blank sheet. He made 26 stops in Fridayâs 3-2 victory, his 100th career start.

New Hampshire took four of six league points from UConn, pushing their winning streak to five games before falling in overtime on Saturday evening. Rookie defender Colton Huard posted two points for the Wildcats and is riding a six-game point streak with four goals and six assists for 10 points during that span. UConnâs Jonny Evans scored the game-winning goal in overtime and added an assist to help the Huskies split their weekend series with New Hampshire.

Providence went 1-0-1 on the weekend with Boston College, toppling the Eagles, 7-0, on Friday before earning an extra league point with a shootout win on Saturday. Sophomore forward Nick Poisson registered two goals and an assist in Fridayâs road win and followed up with the shootout-winning goal on Saturday night. Poisson is tied with teammate Brett Berard for Hockey East scoring lead with 28 points.

Liam Walsh (Jr., F; Bridgeville, Pa.) had an incredible weekend with four points to lift the Warriors to their second straight two-game sweep of a nationally ranked opponent, this time over #9/10 UMass Lowell. He had a pair of assists, including one on Declan Carlileâs game-winning goal Friday, then netted two power-play markers on Saturday, which also included the game-winner in the third, as Merrimack took all six points in conference play from the River Hawks. The Warriors now sit tied for fourth in the Army ROTC Hockey East Standings 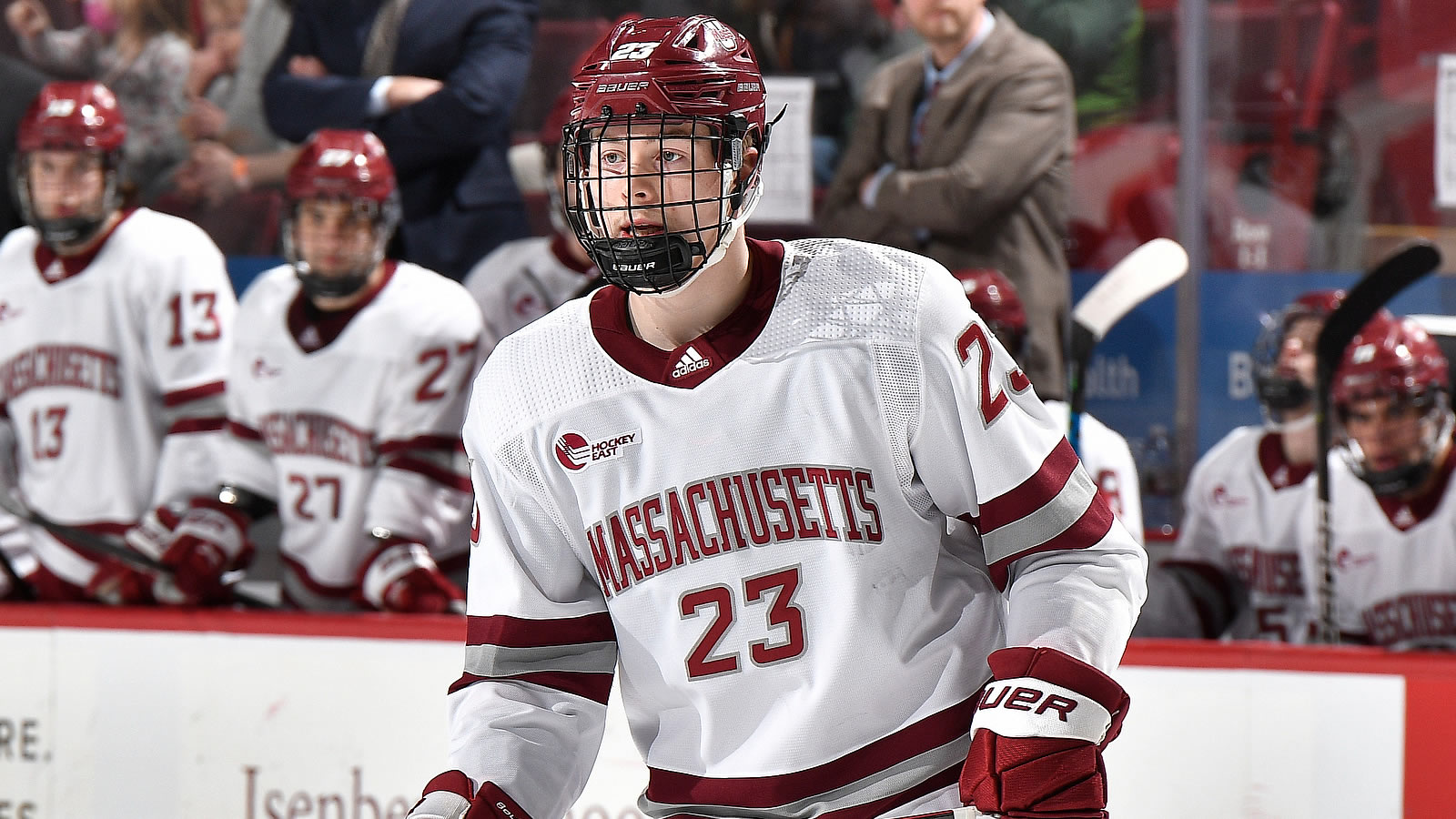 Scott Morrow (Fr., D; Darien, Conn.) had two assists and earned a plus- five rating in a weekend sweep of #12/13 Northeastern. He dished out an assist that set up Fridayâs game winner and added another helper in Saturdayâs match up. He also anchored a defense that contributed to UMassâ shutout of the Huskies. 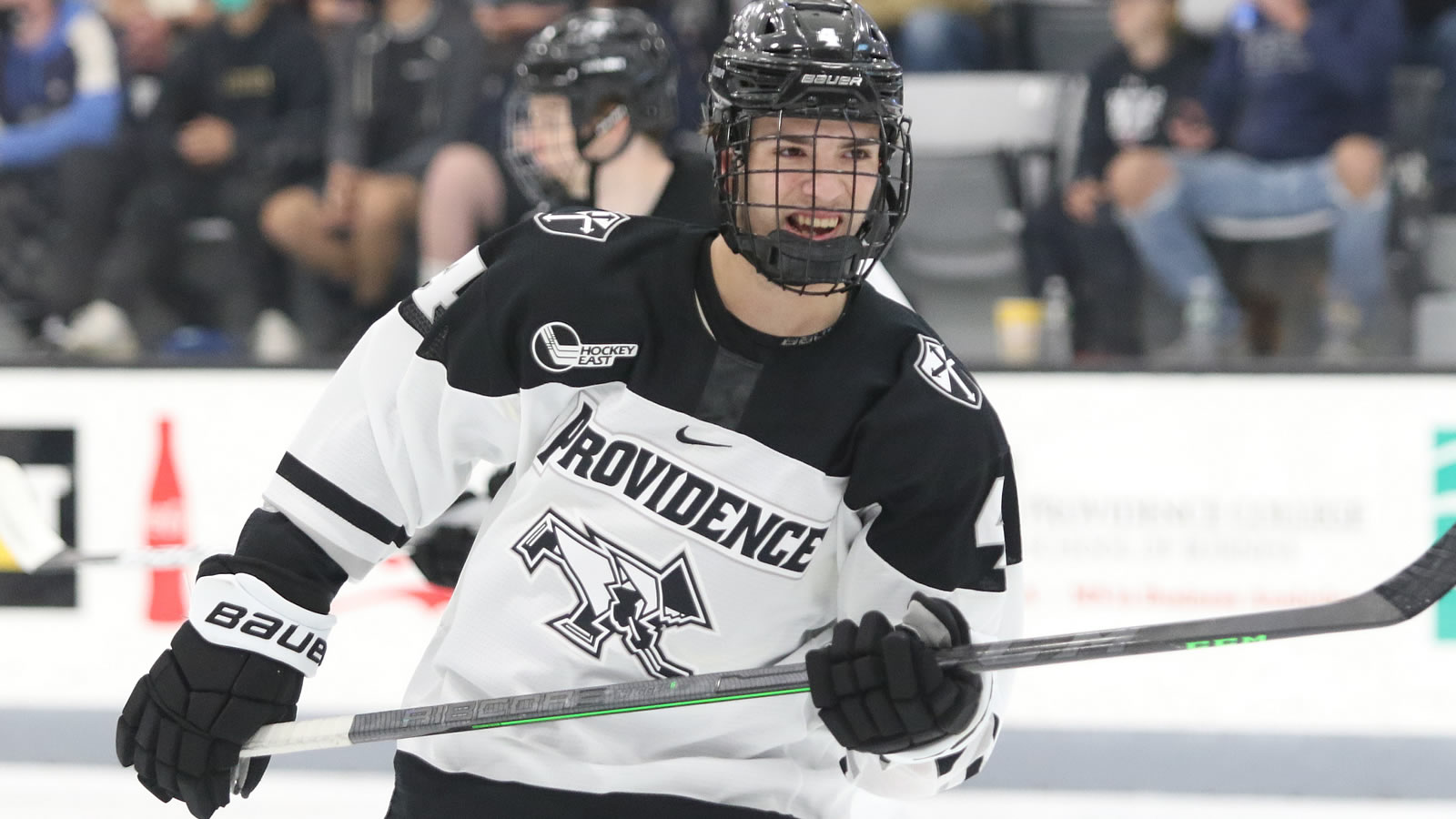 Guillaume Richard (Fr., D; Cap-Sante, Que.) recorded three assists and a plus-three rating in a 1-0-1 series with Boston College last weekend. He helped to anchor a defense that held Boston Collegeâs offense to one goal over two games after the Eagles averaged over 3.50 goals per game entering the weekend. The freshman leads all Hockey East players with a plus-19 rating this season. 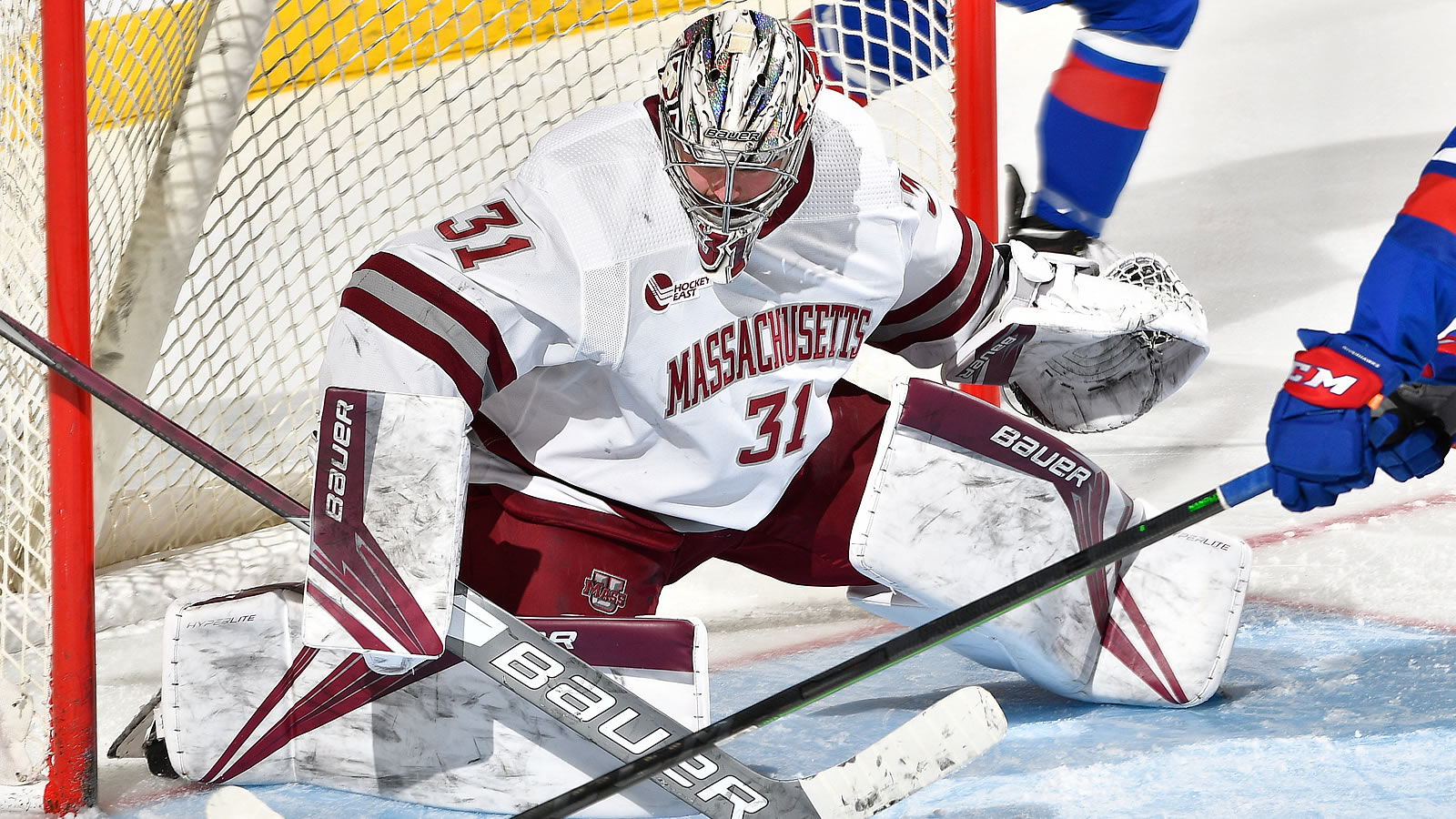 Matt Murray (Gr., G; St. Albert, Alta.) stopped 53 of 55 shots and picked up a pair of wins in a weekend sweep of #12/13 Northeastern. The grad student posted a 1.00 goals against average and a .964 save percentage on the week and collected his 14th career shutout with 27 saves in Saturdayâs 6-0 win over the Huskies on the road. He made 26 stops in Fridayâs 3-2 victory, his 100th career start.

Ethan Phillips, BU (Jr., F; Dartmouth. N.S.) Potted a career-high two goals in the Terriersâ 4-0 win over Vermont on Saturday. Phillips rang the post the first period to come inches away from a ht trick. He finished the weekend with a team-high eight shots on goal and was a plus-one.

Brian Carrabes, BU (Fr., F; North Andover, Mass.) Had the primary helper on the Terriersâ game-winner against Vermont on Saturday, as his perfectly-placed shot was redirected past the Catamount netminder. Carrabes finished the weekend as a plus-two.

Ty Gallagher, BU (Fr., D; Clarkston, Mich.) Recorded a fantastic primary assist on Saturday as part of the Terriersâ 4-0 win over Vermont, as his patience and puck possession set up Ethan Phillipsâ first goal of the day. Gallagher also led BU with three blocked shots on the weekend.

Drew Commesso, BU (So., G; Norwell, Mass.) Made 35 saves on Saturday, including 15 in the third period, to earn his first NCAA shutout in a 4-0 win over Vermont. Commesso allowed just one 5-on-5 goal all weekend and posted a .964 save percentage and 0.98 goals-against average for the weekend.

John Spetz, UConn (So., D; Oak Ridge, N.J.) Had a pair of assists over the weekend, one in each game of the two game set with UNH.

Darion Hanson, UConn (Gr., G; East Bethel, Minn.) Stopped 55 of 59 shots he faced over the weekend, splitting the weekender series with UNH, losing 3-1 and then a 3-2 overtime win.

Bobby Trivigno, UMass (Sr., F; Setauket, N.Y.) Had four points in a weekend sweep of #12/13 Northeastern. He collected an assist in Fridayâs 3-2 win and followed up with a three-point night, scoring twice and adding an assist on the power play, in a 6-0 blanking of the Huskies on the road.

Hugo Ollas, MC (Fr., G; Linkoping, Sweden) Continued his consistent play with a 23-save effort Friday night in the Warriorsâ 3-1 win, then he came in relief for the final 11:14 of the game Saturday and made four saves to help Merrimack secure a 3-2 victory. He now has a .915 save percentage and 2.26 goals against average. He also has .954 save percentage and 1.20 goals against average during his last six outings.

Colton Huard, UNH (Fr., D; Foothill Ranch, Calif.) Posted one goal and one assist for two points on the week. He tied the game at 1-1 in the second period with a power-play goal in the 3-1 win at UConn on Friday, while he tallied an assist on the first goal of the game in the 3-2 overtime loss at UConn on Saturday. Huard has a six-game point streak with four goals and six assists for 10 points during that span.

Mike Robinson, UNH (Sr., G; Bedford, N.H.) Went 1-1-0 on the week allowing four goals and making 66 saves for a 1.98 goals against average and a .943 save percentage. He earned the win at UConn on Friday as he made 29 saves and allowed one goal as UNH won 3-1, while he posted 37 saves and allowed three goals as UNH fell to UConn 3-2 in overtime.

Gunnarwolfe Fontaine, NU (So., F; East Greenwich, R.I.) The top point-scorer for the Huskies this weekend with four assists across the first two games of the week against Vermont and UMass. Now tied for the team lead in assists at 12.

Justin Hryckowian, NU (Fr., F; LâÃle-Bizard, Que.) Top rookie for the Huskies notching two goals and an assist on the week for three points. Both goals came on the power play and his assist tied him with Fontaine for most assists on the team.

Jordan Harris, NU (Sr., D; Haverhill, Mass.) Notched two goals on the week including the eventual game-winner at Vermont. Also tallied 3 blocks and helped lead to a shutout at Vermont with his defensive play.

Nick Poisson, PC (So., F; Vancouver, B.C.) Poisson registered two goals and an assist in the Friarsâ 7-0 win at Boston College on Friday night and followed up with the shootout-winning goal on Saturday night. Poisson is tied with teammate Brett Berard for Hockey East scoring lead with 28 points.

Jaxson Stauber, PC (Jr., G; Plymouth, Minn.) Stopped 55 of 56 shots he faced this weekend, including all 29 in Friday nightâs shutout at Boston College. The junior posted a 0.48 GAA and .982 save percentage over two games.