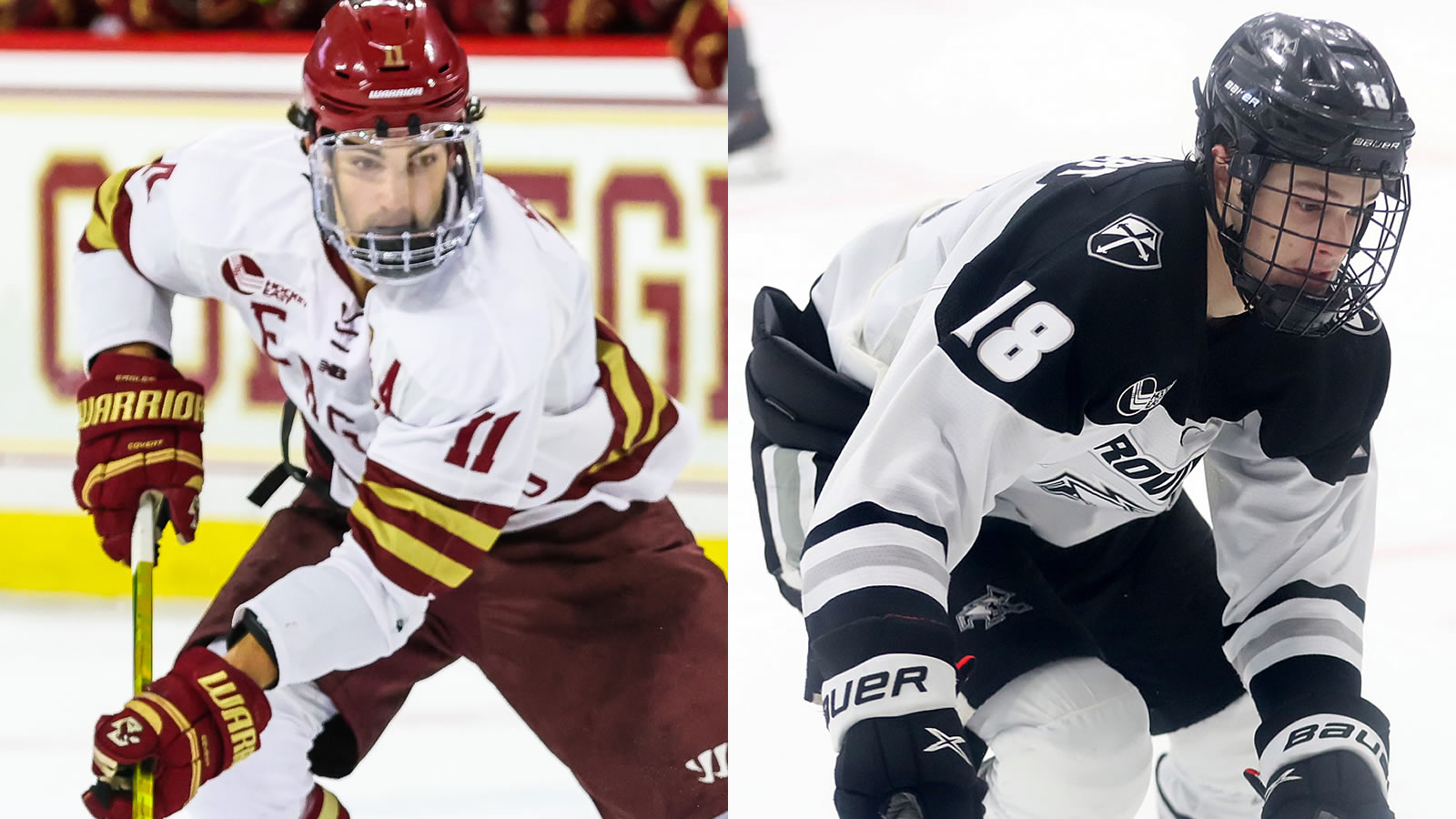 Boston College swept a pair of games at the Ledyard Bank Classic, toppling Mercyhurst and host Dartmouth by scores of 4-2 and 6-1. Jack McBain scored twice in each game, bringing his season total to 13, a total that more than doubles his previous career high. Henry Wilder made 54 saves and earned both victories for the Eagles.

Providence advanced to the title game of the inaugural Holiday Faceoff in Milwaukee thanks to a natural hat trick from Jamie Engelbert. The junior forward started by potting the game-winning strike in the second period and adding two more insurance goals shortly after. He finished with a plus-three rating and six shots on goal over the an unbeaten two-game weekend.

Merrimack junior blueliner Zach Uens enjoyed a historic effort on the back end for Merrimack in a 7-1 win at Brown on Sunday. He was on the ice for all seven of Merrimackâs goals, all at even strength, which was good for a plus-seven on-ice rating. Uens also dished out an assist on the game-opening goal.

Boston University downed Brown, 5-1, despite being shorthanded with only 15 players. Alex Vlasic was one of just four defensemen dressed and led the Terriers with three blocked shots and was a plus-three. He also scored his first goal of the season when he launched the puck from his own faceoff circle and into an open net.

New Hampshireâs offense exploded to take a 7-1 win over Mercyhurst on Dec. 31, including a goal and an assist from freshman forward Liam Devlin. Mike Robinson went 1-0-0 on the week as he allowed only one goal in the 7-1 win versus Mercyhurst on Dec. 31. He made 29 saves for a .967 save percentage.

Jack McBain (Sr., F; Toronto, Ont.) was named the MVP of the Ledyard Classic after powering Boston College to wins over Mercyhurst and Dartmouth with two goals in each contest. His four tallies moved his season total to 13, while the outings were his third and fourth multi-goal games of the year. The senior has now set new career highs in points (24) and goals.

Jamie Engelbert, PC (Jr., F; Cobourg, Ont.) Recorded his first career hat trick in Providenceâs 6-2 win over Bowling Green on Tuesday, kicking it off by potting the game-winning strike and adding two more insurance goals shortly after. He finished with a plus-three rating and six shots on goal over the an unbeaten two-game weekend in Milwaukee. 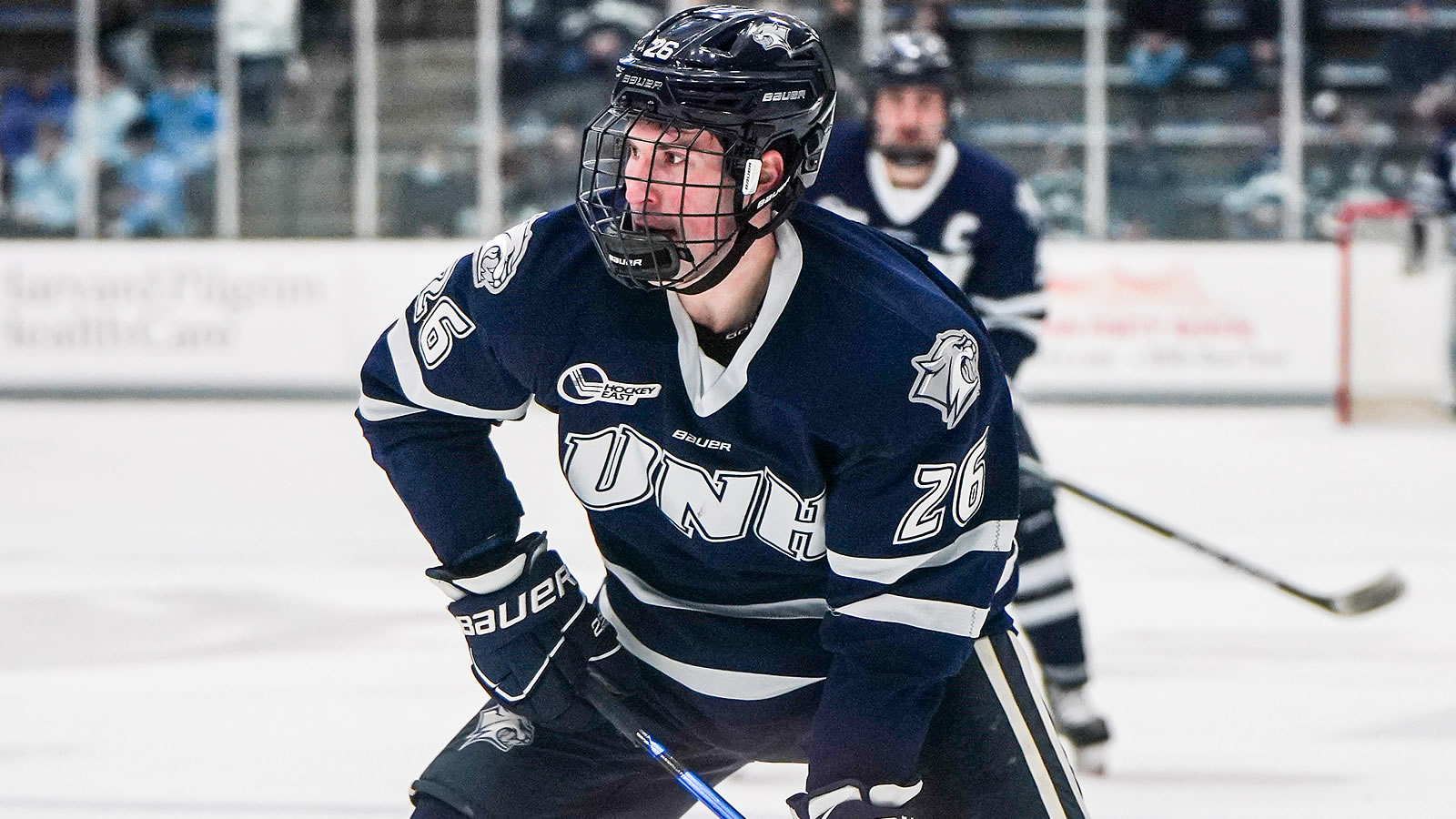 Liam Devlin (Fr., F; Needham, Mass.) posted one goal and one assist for two points in a weekend split for UNH. He tallied an assist on UNHâs lone goal of the game versus Dartmouth in the 3-1 loss on Dec. 30 and recorded his fifth goal of the season in the 7-1 win over Mercyhurst on Dec. 31. 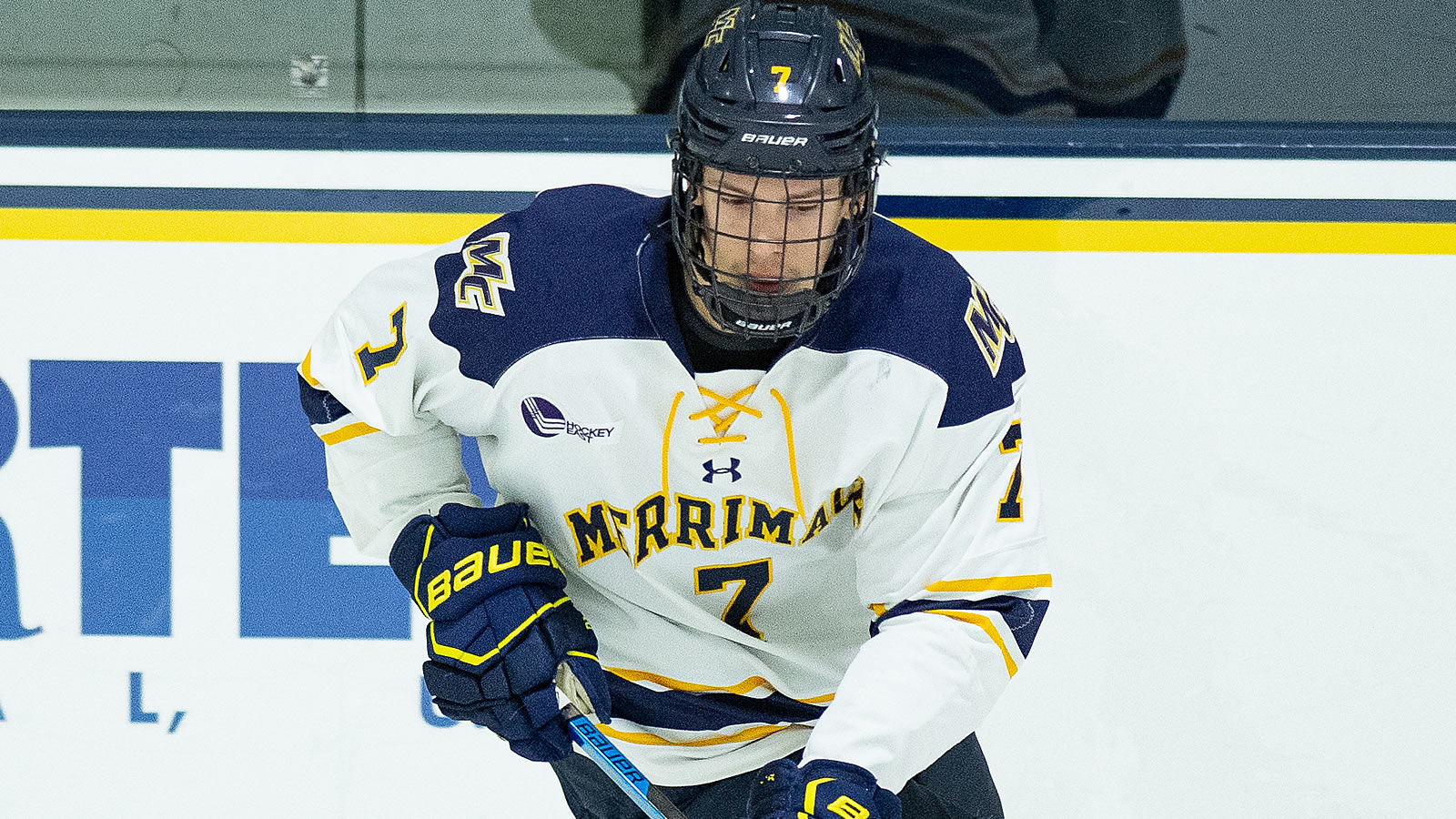 Zach Uens (Jr., D; Belleville, Ont.) compiled a historic effort on the back end for Merrimack in a 7-1 win at Brown on Sunday. He was on the ice for all seven of Merrimackâs goals, all at even strength, which was good for a plus-seven on-ice rating. The rating is believed to be best single game rating in Division I program history. Nationally, Shayne Gostisbehere of Union also compiled a plus-seven rating in the in the 2014 national championship game. Uens also dished out an assist on the game-opening goal. 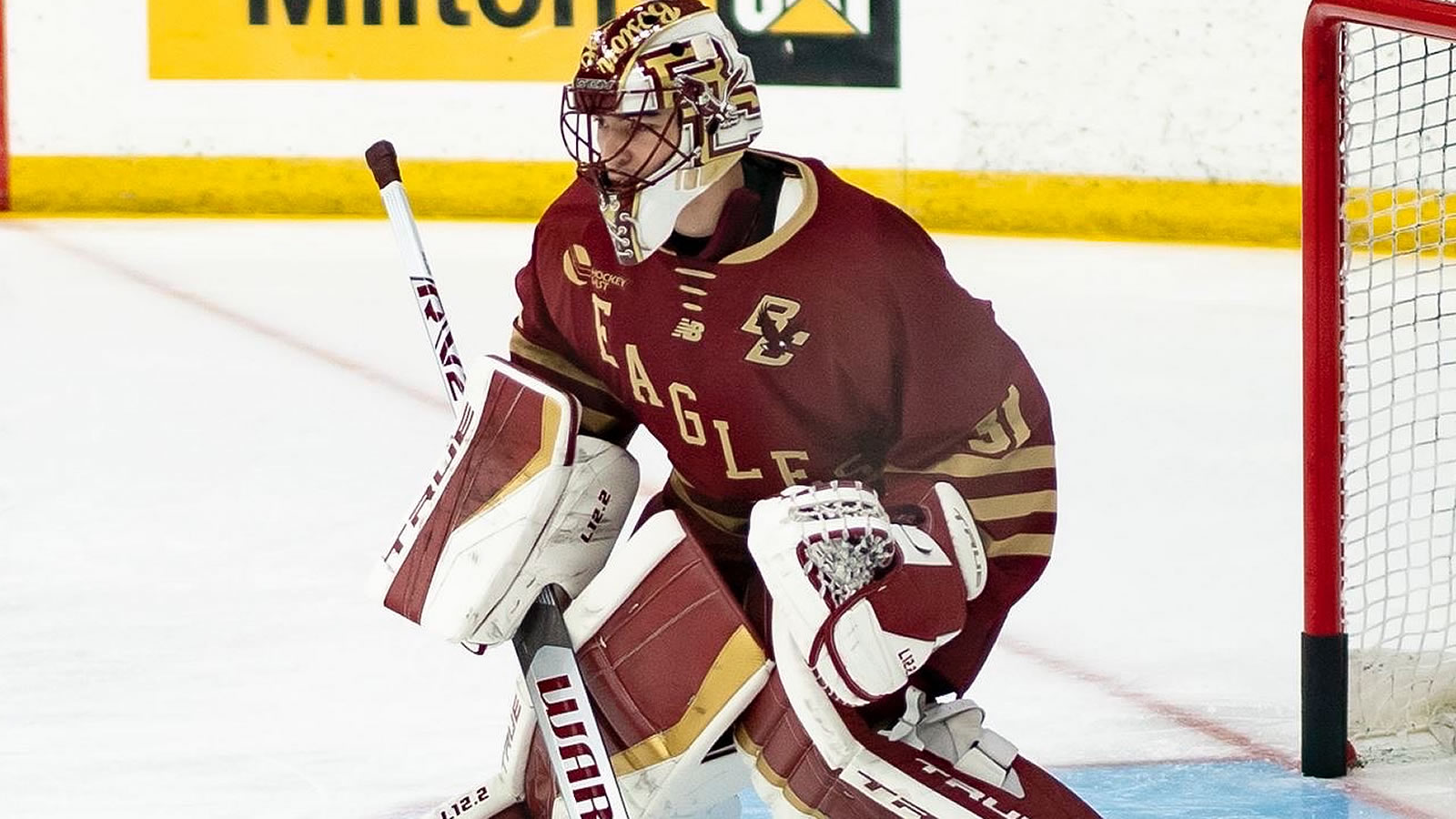 Henry Wilder (So., G; Needham, Mass.) was named the Top Goalie of the Ledyard Classic, picking up wins over Mercyhurst and Dartmouth while allowing only three goals across the entire tournament. He stopped 54 of the 57 shots he faced for a .947 save percentage.

Aidan Hreschuk, BC (Fr., D; Long Beach, Calif.) Scored his first collegiate goal in a 4-2 win over Mercyhurst on Thursday in the Ledyard Classic, then added an assist in a 6-1 victory over Dartmouth on Friday in the Championship Game. He finished the tournament with a plus-four rating and five shots on goal.

Drew Helleson, BC (Jr., D; Farmington, Minn.) Collected three assists in the Ledyard Classic Championship Game, a 6-1 victory over Dartmouth on Friday night. The junior finished the tournament with six shots on goal, three blocks and a plus-four rating and was named to the Ledyard Classic All-Tournament Team.

Luke Tuch, BU (So., F; Baldwinsville, N.Y.) Tallied his first two goals of the season to give BU a 2-0 lead that the Terriers never relinquished in a 5-1 victory at Brown. He was a plus-three, generated three shots on goal and also blocked three shots for the shorthanded Terriers, who were playing with just 15 skaters.

Alex Vlasic, BU (Jr., D; Wilmette, Ill.) Proved outstanding for the Terriers in a 5-1 win at Brown as one of just four defensemen dressed for a shorthanded BU squad. He led the Terriers with three blocked shots and was a plus-three. He also scored his first goal of the season when he launched the puck from his own faceoff circle and into an open net.

Vinny Duplessis, BU (So., G; Quebec City, Que.) Only needed to make 11 saves in a 5-1 win at Brown on Friday, but he made a game-changing stop in the first period with an outstanding glove save to keep the Terriers ahead, 1-0, and help them go on to take a 2-0 lead into the first intermission.

Carl Berglund, UML (Jr., F; Hammaro, Sweden) Led the River Hawks in scoring with a goal and an assist in 3-2 win over St. Lawrence. His goal came on the power play to close out the first period on Wednesday against the Saints. He addded an assist on the River Hawksâ eventual game-winning goal and now leads the team in scoring with 14 points off three goals and 11 assists.

Isac Jonsson, UML (Fr., D; Angelholm, Sweden) Dished out an assist on the River Hawksâ first goal Wednesday against St. Lawrence, He added a shot on goal in the second period and finished with a plus-one rating and one block.

Marek Korencik, UML (Jr., D; Zilina, Slovakia) Registered his second goal of the season to spark the River Hawksâ offense in 3-2 win over St. Lawrence on Wednesday. Finished with two shots on goal, a +1 rating and two blocks.

Owen Savory, UML (Sr., G; Cambridge, Ont.) Stopped 23 shots to help the River Hawks pick up a 3-2 decision on the road against St. Lawrence to close out the first half. Shut down all four St. Lawrence power play opportunities. He now ranks second overall in the conference in save percentage (.948) and first overall in GAA (1.29) and second in the nation in save percentage (.948) and third in GAA (1.29).

Jaxson Stauber, PC (Jr., G; Plymouth, Mich.) Guided the Friars to an unbeaten 1-0-1 record at the Holiday Faceoff Tournament in Milwaukee this week. The junior stopped 69-of-73 shots he faced for a 1.92 GAA and .945 save percentage over two games.