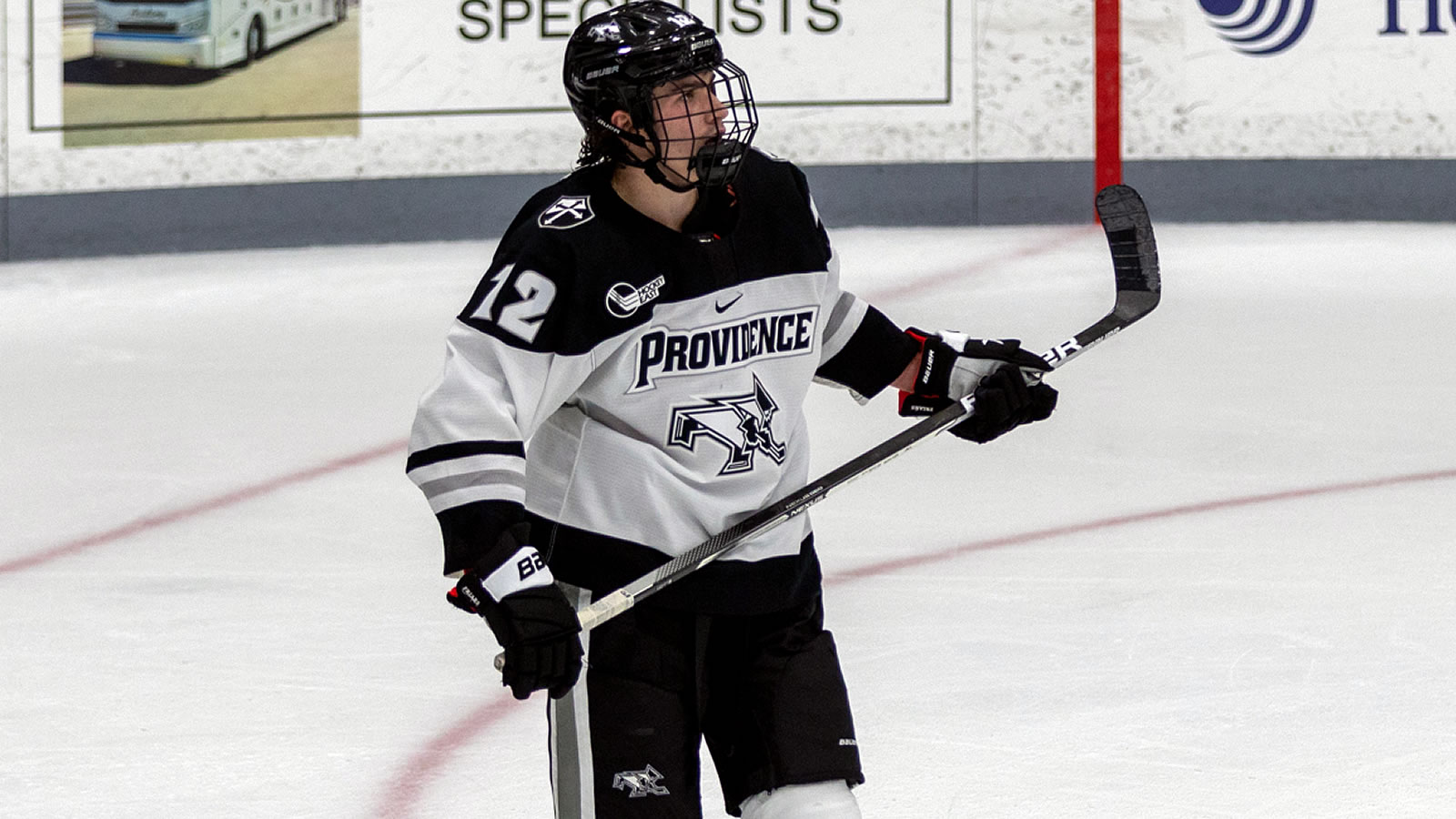 UMass Lowell extended its unbeaten streak to eight games (6-0-2) with a pair of wins against nationally ranked league opponents in #17 Northeastern and #16 Boston College. Ben Meehan racked up four points for UML, including a goal and an assist in each of the two wins. On Friday, Meehan set up the game-tying goal, a power-play strike, at 14:09 of the third period, before netting the game-winning, overtime goal 1:26 into the extra period against #17 Northeastern.

Massachusetts and Boston University earned three points each in a tight weekend home-and-home. UMass rookie defenseman Ryan Ufko had five points on one goal and four assists, including had two helpers in Fridayâs 2-2 tie. The Minutemen earned the extra point by winning the shootout in Boston. The next night, BUâs Case McCarthy scored the overtime-winner at UMass, his second goal of the weekend.

Maine head coach Ben Barr earned his first win as bench boss of the Black Bears with a thrilling 6-5 overtime victory in Orono on Friday night. Freshman defenseman David Breazeale scored his first career goal in the final seconds of OT to hand the victory to the home team. The next evening, Merrimack netminder Zachary Borgiel had a historic night as he pitched an 18-save shutout to lift the Warriors to the road win and notch his first collegiate shutout. It was also the first shutout in Merrimack College menâs hockey program history at Alfond Arena.

Providence won each of its two games over the weekend, toppling AIC, 2-1, in overtime thanks to two goals off the stick of defenseman Cam McDonald. The next night, the Friars took a wild 6-4 victory over UConn at home. Nick Poisson amassed five assists over the two wins, including the assist on the game-winning overtime goal by McDonald on Friday. All five of Poissonâs assists were primary assists. The sophomore now ranks second in Hockey East in scoring with 15 points and first with 12 helpers.

New Hampshire took four of six points from Vermont in a two-game set in Durham. Jackson Pierson scored three goals for the Wildcats, including the game-winning goal on a penalty shot in a 2-1 win on Friday, while he netted the second and third goals of the game for UNH in the 3-3 tie on Saturday.

Nick Poisson (So., F; Vancouver, B.C.) amassed five assists over two games last weekend, including the assist on the game-winning overtime goal by Cam McDonald on Friday vs. AIC. All five of Poissonâs assists were primary assists. The sophomore ranks second in Hockey East in scoring with 15 points and first with 12 helpers. 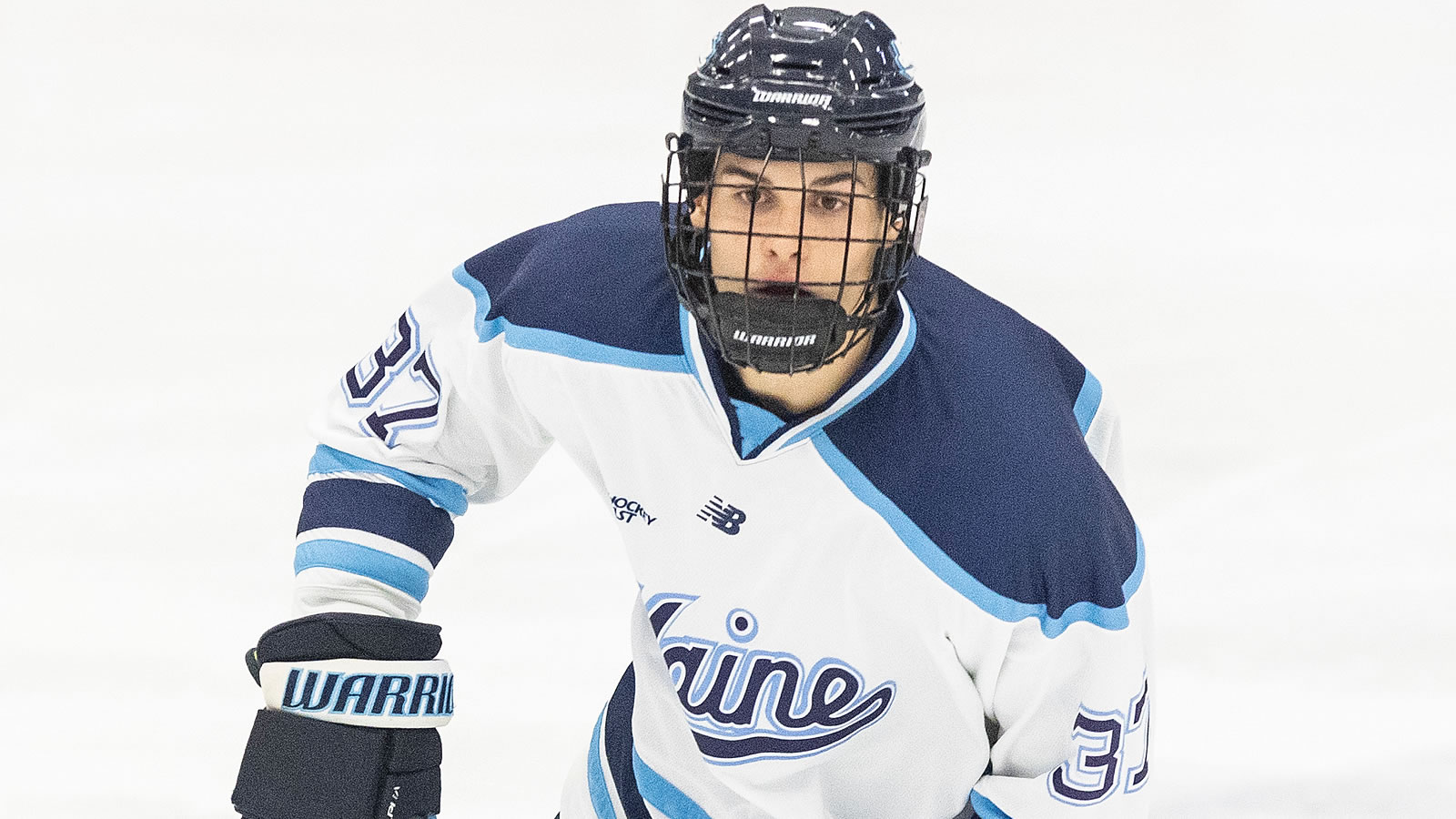 David Breazeale (Fr., D; Jenison, Mich.) scored his first career goal at 4:19 of overtime to hand the Black Bears a 6-5 home victory over Merrimack on Friday night, Ben Barrâs first as head coach at Maine. The rookie blueliner also dished out two assists, each on a tally that tied the game for Maine. The second helper came at 18:33 of the third period with the Maine goaltender pulled, pushing the game into the extra frame where he netted the decisive tally. 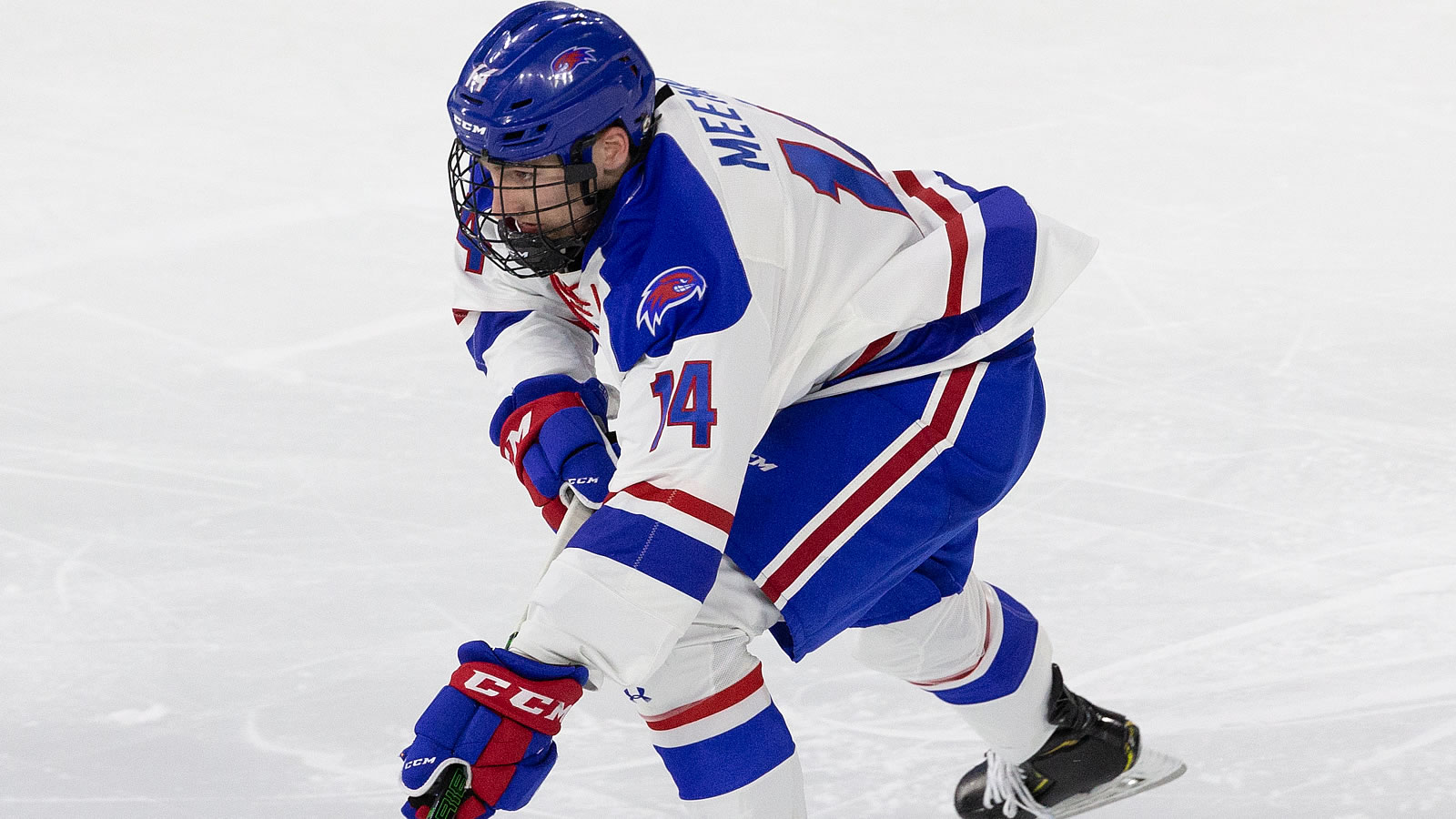 Ben Meehan (So., D; Walpole, Mass.) racked up four points, including a goal and an assist in each of two wins against ranked league opponents, to help UMass Lowell extend its unbeaten run to eight games (6-0-2) and 4-0-0 in league play. On Friday, Meehan set up the game-tying goal, a power-play strike, at 14:09 of the third period, before netting the game-winning, overtime goal 1:26 into the extra period against #17 Northeastern. On Saturday, he scored the River Hawksâ second tally of the contest, a power-play strike, after setting up the first goal of the game in a 4-2 win over #16 Boston College. 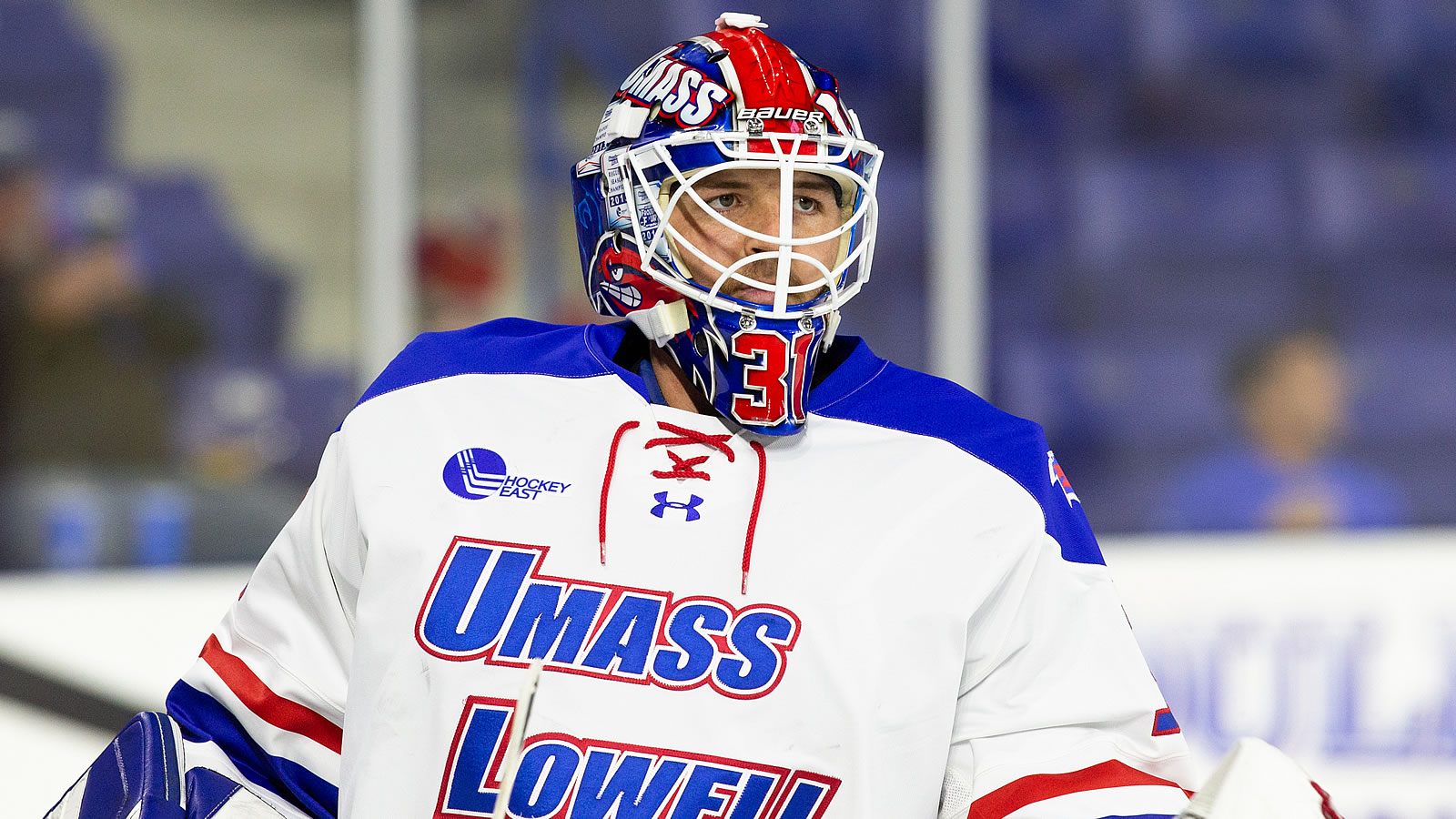 Owen Savory (Sr., G; Cambridge, Ont.) earned two wins over ranked opponents in league play, backstopping the River Hawks to victories against #17 Northeastern and #16 Boston College. He stopped 40 of 43 shots he faced in the two outings and now sits at 5-0-1 on the year.

Jack McBain, BC (Sr., F; Toronto, Ont.) Scored the game-winning goal at UConn on Friday with 1:22 left in regulation and added an assist on Saturday at No. 20 UMass Lowell. He sits atop all Hockey East players with 16 points on six goals and 10 assists.

Brandon Kruse, BC (Gr., F; Saline, Mich.) Collected three assists over the weekend, including two on Friday at UConn to put him over 150 career NCAA points

Jay O'Brien, BU (Jr., F; Hingham, Mass.) Playing for the first time since the season-opening weekend, OâBrien tallied three points for the Terriers over two games. He notched the primary assist on Fridayâs game-tying goal before scoring the first goal on Saturday and providing the primary helper on the second goal in a 4-3 overtime win on Sunday. OâBrien generated a team-high 11 shots on goal over the weekend, including a game-high seven on Friday.

Case McCarthy, BU (Jr., D; Clarence Center, N.Y.) Scored a goal in each game, including the overtime-winner at UMass on Saturday. McCarthy led BU with four blocked shots in addition to his goal on Friday. He has now lit the lamp in four of his last five games.

Ryan Tverberg, UConn (So., F; Richmond Hill, Ont.) Extended his scoring streak to five-straight games (6g) and point-streak to six games (6g, 4a) as he scored a goal against both Boston College and Providence this weekend. Tverberg now has nine goals on the season, the most of any player in Hockey East.

Jarrod Gourley, UConn (Gr., D; Calgary, Alta.) Earned his first points as a Husky over the weekend, assisting on UConnâs lone goal against Boston College and scoring his first goal of the season on Saturday at Providence.

Ryan Ufko, UMass (Fr., D; Smithtown, N.Y.) Had five points on one goal and four assists in a 0-1-1 weekend against Boston University, which included a shootout win for the Minutemen and an overtime loss. The blueliner had two helpers in Fridayâs 2-2 tie before he scored first collegiate goal in Saturdayâs matchup and added two more assists. He factored in all five UMass goals on the week.

Andre Lee, UML (Jr., F; Karlstad, Sweden) Netted two goals Saturday in a 4-2 win over #16 Boston College. Lee opened the scoring for the River Hawks at 14:56 of the first period before tallying the game-winning goal 5:48 into the final frame to lift the River Hawks over the Eagles. UMass Lowell extended its unbeaten run to eight games (6-0-2) in the process and are 4-0-0 in league play.

Max Newton, MC (Gr., F; Vancouver, B.C.) Came away with a trio of points in two games at Maine, as Merrimack lost in overtime and then beat the Black Bears at Alfond Arena. He scored two goals Friday in the opener, then had the primary assist on Ben Brarâs game-winning goal Saturday. He is now on a three-game point streak (2g, 2a) and leads the team with 13 points in 12 games.

Zach Uens, MC (Jr., D; Belleville, Ont.) Chipped in with a pair of assists Friday night in the Warriorsâ overtime setback at Maine. He now has six points in 12 games, all assists.

Zachary Borgiel, MC (So., G; Fort Gratiot, Mich.) Had a historic night in net Saturday in Merrimackâs 2-0 win over Maine. He was perfect on 18 shots to lift the Warriors to the road win and notch his first collegiate shutout. It was also the first shutout in Merrimack College menâs hockey program history at Alfond Arena.

Jackson Pierson, UNH (Sr., F: Zionsville, Ind.) Scored three goals on the week for three points as UNH took four of six points against Vermont. He scored the game winning goal on a penalty shot in the 2-1 win on Friday, while he netted the second and third goals of the game for UNH in the 3-3 tie on Saturday. Pierson leads the team with four goals.

Robert Cronin, UNH (Fr., F; Plymouth, Mass.) Tallied one goal and one assist for two points on the week as UNH went 1-0-1 in a weekend set with Vermont. On Saturday, he scored the first goal of the game and added an assist on the third goal in the 3-3 tie.