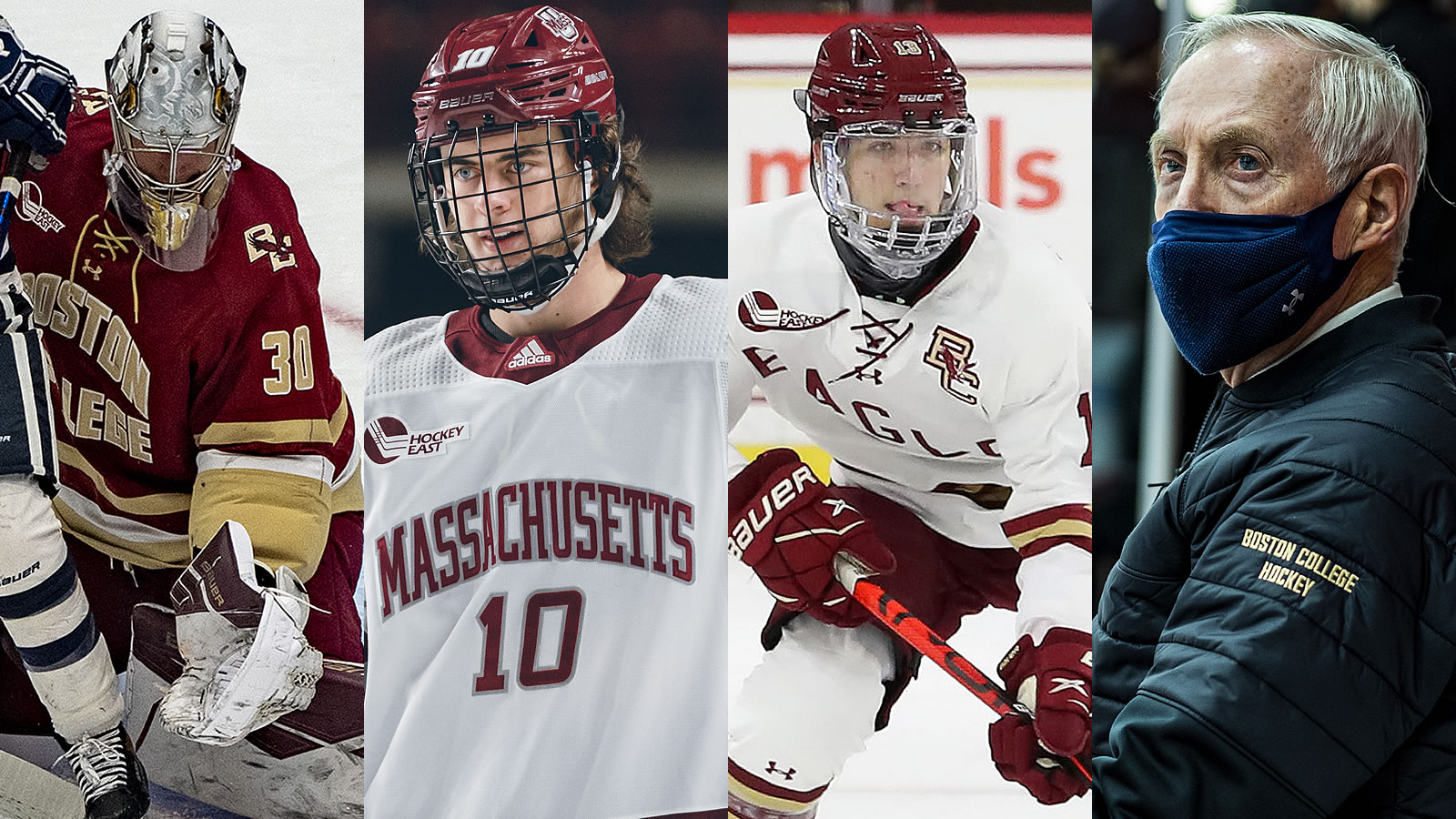 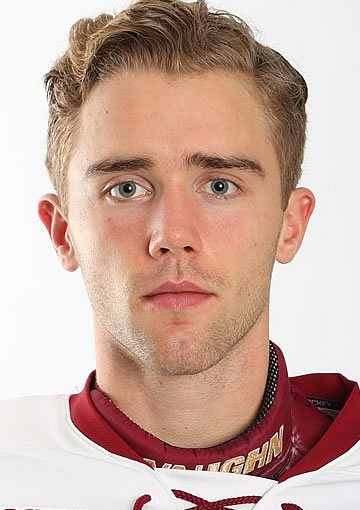 Knight becomes the first Boston College netminder to win the leagueâs top individual award outright after Thatcher Demko shared the honors in 2015-16. During the Hockey East regular season, Knight led the league with 15 wins, five more than any other goalie, and a 15-2-1 record. His .937 save percentage was tied for tops in Hockey East and was third-best in the NCAA while he carried a 1.99 goals against average which was second-best among all league backstops. Knight faced 570 shots in his 18 starts, the third-highest total of any league netminder, making 534 saves across 1087:35 of work to average nearly 30 saves per game. He began the season with an 11-game personal unbeaten streak (10-0-1) and did not drop a game until February 6. The sophomore netminder posted 10 games of at least 30 saves, including four straight to start the year, including consecutive shutouts of then-No. 12 Providence College. He was tabbed the Stop It Goaltender of the Month for November and December 2020 and Hockey East Army ROTC Player of the Week on December 7. He was named a finalist for the Mike Richter Award, given annually to the top menâs goaltender in NCAA Ice Hockey, for the second straight year on February 26. Knight spent a month of the season with the U.S. National Junior Team where he won the gold medal as the starting goaltender at the World Junior Championship. During the tournament, the recorded three shutouts for the red, white, and blue, the most by any goaltender in the history of a single tournament. The 13th overall selection of the Florida Panthers in the 2019 NHL Entry Draft stopped all 34 shots he faced in the gold medal game, marking the first shutout in the championship game of the World Juniors since 2012. The shutout also marked the first shutout by a USA team in the World Junior Championship medal round and gave Knight sole ownership of the most career shutouts for a Team USA netminder in the tournament. 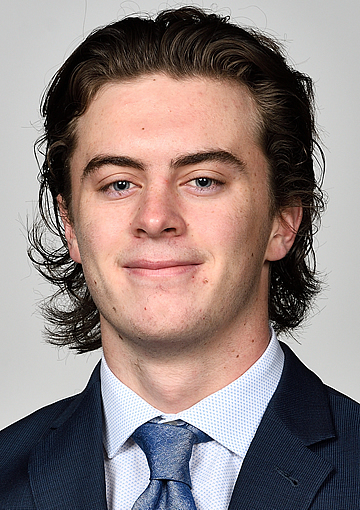 Lopina is the first Massachusetts Minuteman to be named Hockey East Pro Ambitions Rookie of the Year. The first-year center won more faceoffs than any other rookie in the NCAA during the 2020-21 regular season, claiming victory at the dot 244 times. His 244 wins were third-most of any player in Hockey East and the 10th-highest total of any skater nationally. His seven goals tied for the most among his league classmates and included more power-play strikes than any other conference first-year player. The Minooka, Illinois native led all national freshman with 116 faceoff wins across November and December, 53 more wins than the next closest rookie. In the first two months of the year, Lopina paced all Hockey East rookies with four goals, seven assists, three power-play goals, four power-play points, and 116 faceoff wins. He netted the first game-winning goal of his career on Dec. 20 against Vermont and enjoyed a three-game point streak during which he has compiled five points and four assists, including one game-winning helper. 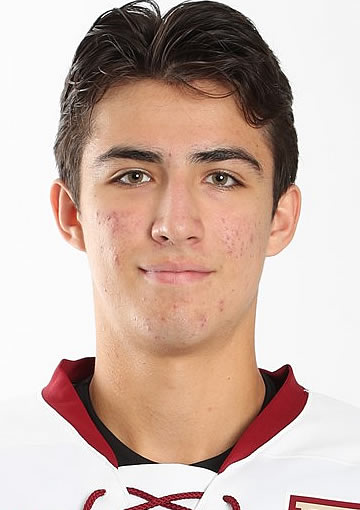 Nesterenko led all Hockey East freshmen in goals (7), assists (11), points (18), points per game (0.86), and shorthanded goals (1) during the regular season. The Brooklyn, New York native began his Eagles career with a five-game point streak during which he racked up three goals and four assists for seven points and netted a goal in three consecutive contests. He posted five games with at least two points, including consecutive outings on December 5 and 11 with one goal and three assists. In the 14 games in which Nesterenko has recorded a point, the Eagles are 12-2-0. He posted a plus-14 on-ice rating during the regular season, finishing seventh among all skaters in the conference. His 18 points were the 14th-highest total in Hockey East while is 0.86 points per game finished 10th among all national first-year players in the NCAA during the regular season. Nesterenko was named Pro Ambitions Rookie of the Week on Jan. 18 after a one-goal, two-point night in a 5-3 win at Merrimack. He scored a shorthanded tally just 55 seconds into the second period before assisting on the game-winning goal with just four minutes left in regulation. He was honored again after scoring the game-winning goal in Sundayâs Hockey East Quarterfinal win over New Hampshire 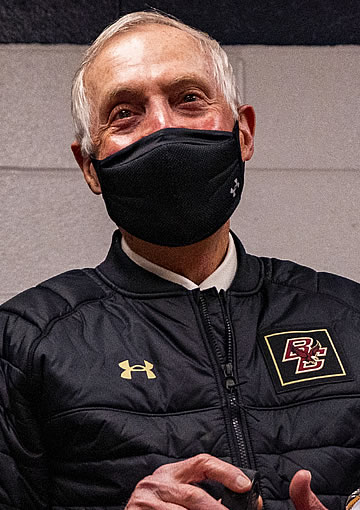 York has earned his fifth nod as the leagueâs top coach after leading the Eagles to a 16-4-1 record and the top seed in the Hockey East Tournament for the 10th time during his tenure. Yorkâs offense scored 3.90 goals per game, the second highest total in the NCAA during the regular season, while allowing just 2.19 goals per game, second-best in Hockey East. The Eaglesâ penalty kill operated at a rate of 85.8%, good for second in the conference and 11th nationally and scored a national-best eight shorthanded goals, nearly double any another team in the country.

All four award winners can be seen in action on Wednesday during the Hockey East Semifinals. Boston College will host UMass Lowell at 4:30 p.m. while Providence visits Massachusetts at 7:00 p.m. Both games will air live on NESN and stream worldwide on SportsLive. Tom Caron and Billy Jaffe will be on the call in Chestnut Hill before Tyler Murray and Jim Connelly will handle duties in Amherst. Adam Pellerin and Andrew Raycroft will serve as intermission hosts.