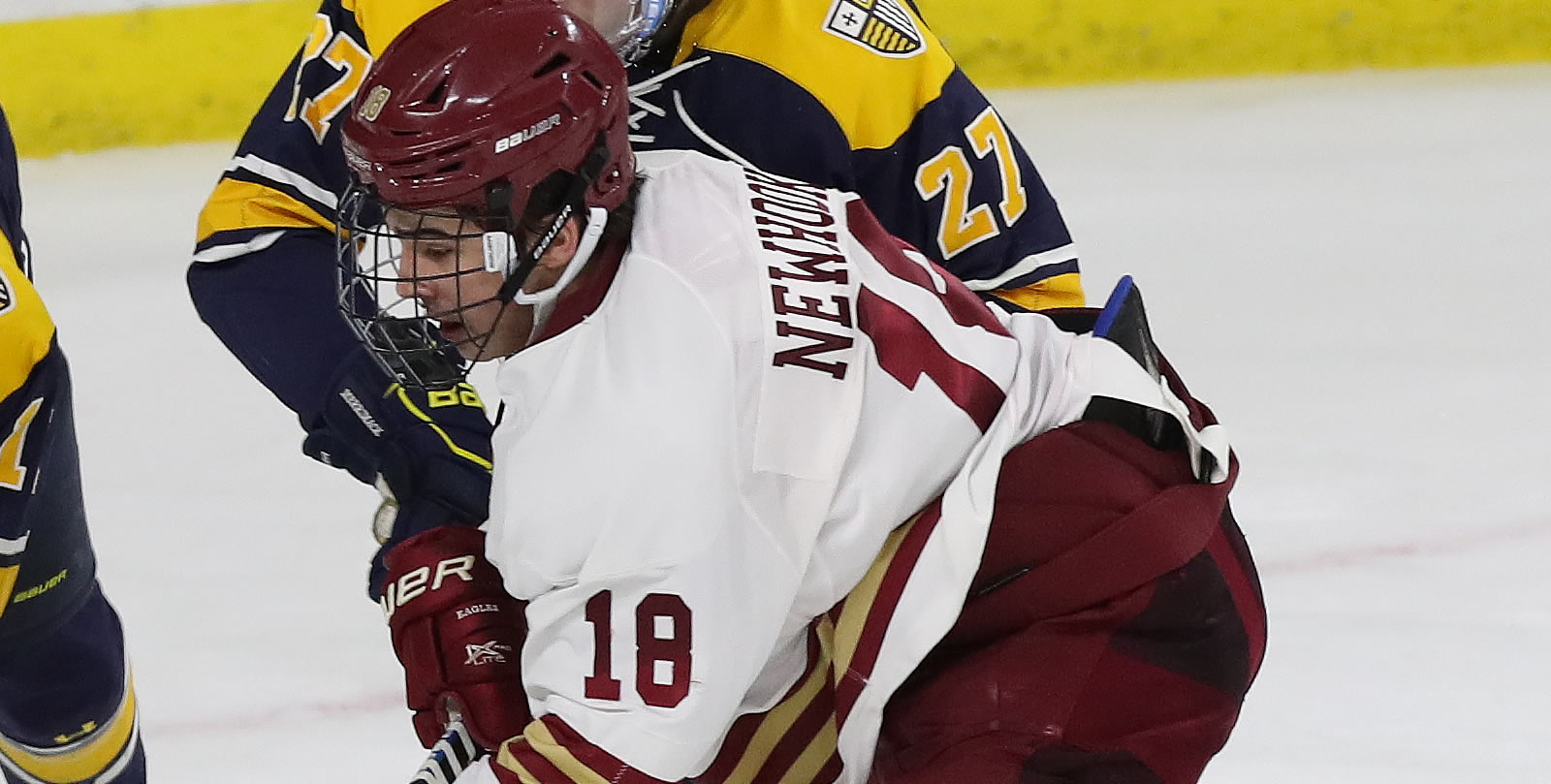 Boston College freshman forward Alex Newhook has been named the recipient of the 2020 Tim Taylor Award, bestowed annually upon the best first-year player in NCAA Division I men's ice hockey, the Hockey Commissioners' Association announced today. He is the first BC player to win this award and the seventh from the Hockey East Association in the 14 years of the award. The award is voted on by the nation's assistant coaches and is named for the former Yale University and U.S. Olympic Team head coach.

Newhook finished second among all league players in conference scoring with 15 goals and 18 assists for 33 points in 24 games, while leading the league with a plus-25 on-ice rating. His 15 goals were second among all skaters, including four game-winning strikes that helped the Eagles to a 17-6-1 record in Hockey East play and the program's 17th regular season crown. The St. John's, Newfoundland native paced all Hockey East freshmen in goals (15), points (33), points per game (1.38), shorthanded goals (1), game-winning goals (4), and on-ice rating (+25.) He was also second in faceoff percentage, going 122-105 at the dot for a 53.7% efficiency.

Newhook finished the regular season riding a 12-game point streak, picking up 10 goals and 13 assists over the span. Overall, Newhook led the Eagles in scoring with 42 points on 19 goals and 23 assists, including a league-best three shorthanded markers. His 42 points were seventh in the NCAA among all skaters. Among his freshman peers, Newhook's 19 goals, three shorthanded markers, four game-winning goals, and plus-28 rating were tops nationally. The 5-11, 193-pound forward was named both Hockey East and National Player of the Month and Pro Ambitions and National Rookie of the Month for a February run where he led NCAA players with 20 points, 11 assists, two shorthanded goals, and a plus-14 on ice rating.

The Hockey Commissioners Association sponsors this award which results from a ballot containing each NCAA Division I ice hockey conference's Rookie of the Year. The runner-up for this year's Tim Taylor Rookie of the Year Award was Harvard Freshman forward Nick Abruzzese of Slate Hill, NY. Bob

Recipients of the Tim Taylor National Rookie of the Year Award