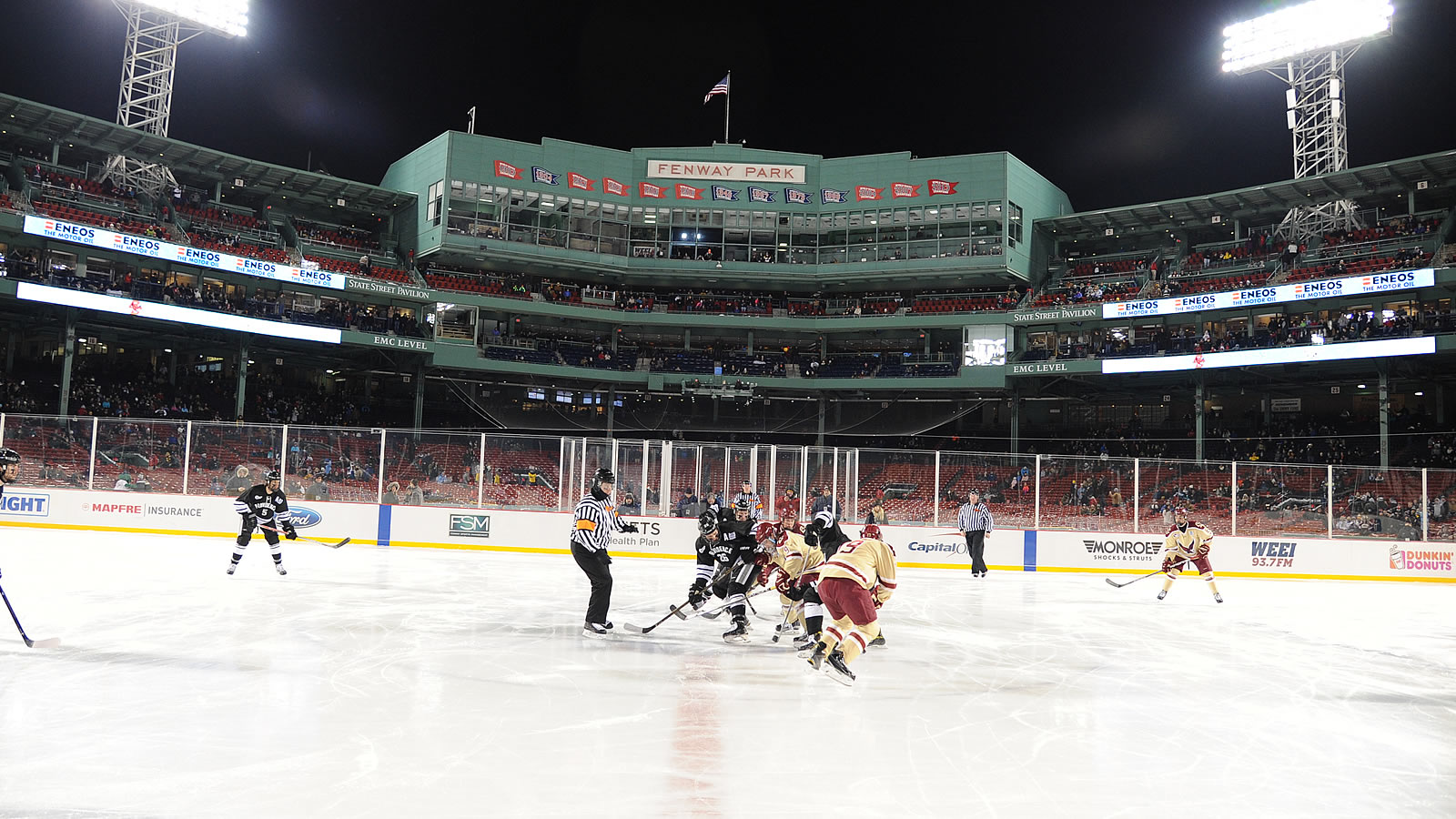 Frozen Fenway Returns In 2023 With A Pair Of Doubleheaders Presented By Moderna, U.S. Virgin Islands Tourism
Fenway Park to host college hockey for the first time since 2017
PDF Format

BOSTON, MA â September 12, 2022 â The City of Boston, Hockey East Association, and Fenway Sports Management (FSM), today announced the return of outdoor college hockey at Fenway Park with Frozen Fenway 2023 presented by Moderna and the U.S. Virgin Islands, which will feature a Womenâs college matchup between Boston University and Holy Cross and a second to be announced contest, as well as two Menâs college games featuring Northeastern vs. UConn and UMass vs. Boston College on January 7. Tickets for the January 7 doubleheader are on sale starting September 22.

âWe are thrilled to bring college hockey back to Fenway Park for the fifth time, continuing a tradition established in 2010,â said Brett Miller, Director, Special Events at Fenway Sports Management. âNew England is home to some of the top hockey programs and most passionate fans, so this yearâs Frozen Fenway promises exciting contests and memorable experiences for all who attend.â

(Womenâs Doubleheader â game date and times to be announced):

âFenway Park is an iconic venue that has already played host to memorable college hockey games, and our schools are excited to take the ice and compete for our fans and bragging rights,â said Hockey East commissioner Steve Metcalf. âThese games at the park will create once-in-a-lifetime memories for the players, students, alumni, and all hockey fans. We are proud to be part of such a special event and appreciate the City of Boston and FSM for welcoming us back.â

On the heels of the 2023 NHL Winter Classic between the Boston Bruins and Pittsburgh Penguins, Frozen Fenway 2023 presented by Moderna and the U.S. Virgin Islands will feature some of the most prestigious teams in college hockey. On the menâs side, the four participating teams have combined to win 16 Hockey East Tournaments and 6 NCAA Tournaments. The Hockey East womenâs matchup features the joint-winningest school, Boston University, against the conferenceâs newest member, Holy Cross.

Visit redsox.com/frozenfenway for January 7 ticket information and additional Frozen Fenway schedule updates. Details for the Boston University-Holy Cross doubleheader, including game date, times, and ticket availability, will be announced at a later date.

Fenway Sports Management (FSM) is a global sports marketing firm that specializes in partnership sales, consulting, and the creation of unique and memorable events and experiences. The company serves as the sponsorship sales arm for FSGâs prestigious sports portfolio, including the Boston Red Sox, Liverpool Football Club, the Pittsburgh Penguins, New England Sports Network (NESN), and RFK Racing. In addition to representing FSGâs network of properties, FSM also serves as the exclusive marketing agency for LeBron James through a strategic partnership with LRMR Ventures.

Outside of sponsorship sales, FSM serves as the sponsorship consulting agency to several brands, advising them on how to use sports as a platform to realize their business goals through a variety of services including strategy development, negotiation, and activation. The firm is also an industry leader with its Special Events practice which creates, plans, and executes a broad spectrum of unique sports and entertainment events that range from large-scale, public events at iconic sports venues, to private, corporate events.

The Hockey East Association is an 11-team Division I college menâs hockey conference founded in 1984 and a 10-team Division I womenâs league which began play in 2002-03. The menâs league has won 10 NCAA championships in the past 28 years, most recently in 2021. Since 1999, Hockey East has won eight menâs NCAA Championships with 17 NCAA Championship Game appearances, while placing 28 teams in the Frozen Four and 77 teams in the NCAA Tournament. Overall, Hockey East has sent 121 teams to the menâs NCAA Tournament since its inaugural season, more than any other conference in that span. Hockey East is home to 11 Hobey Baker winners and four Patty Kazmaier winners.