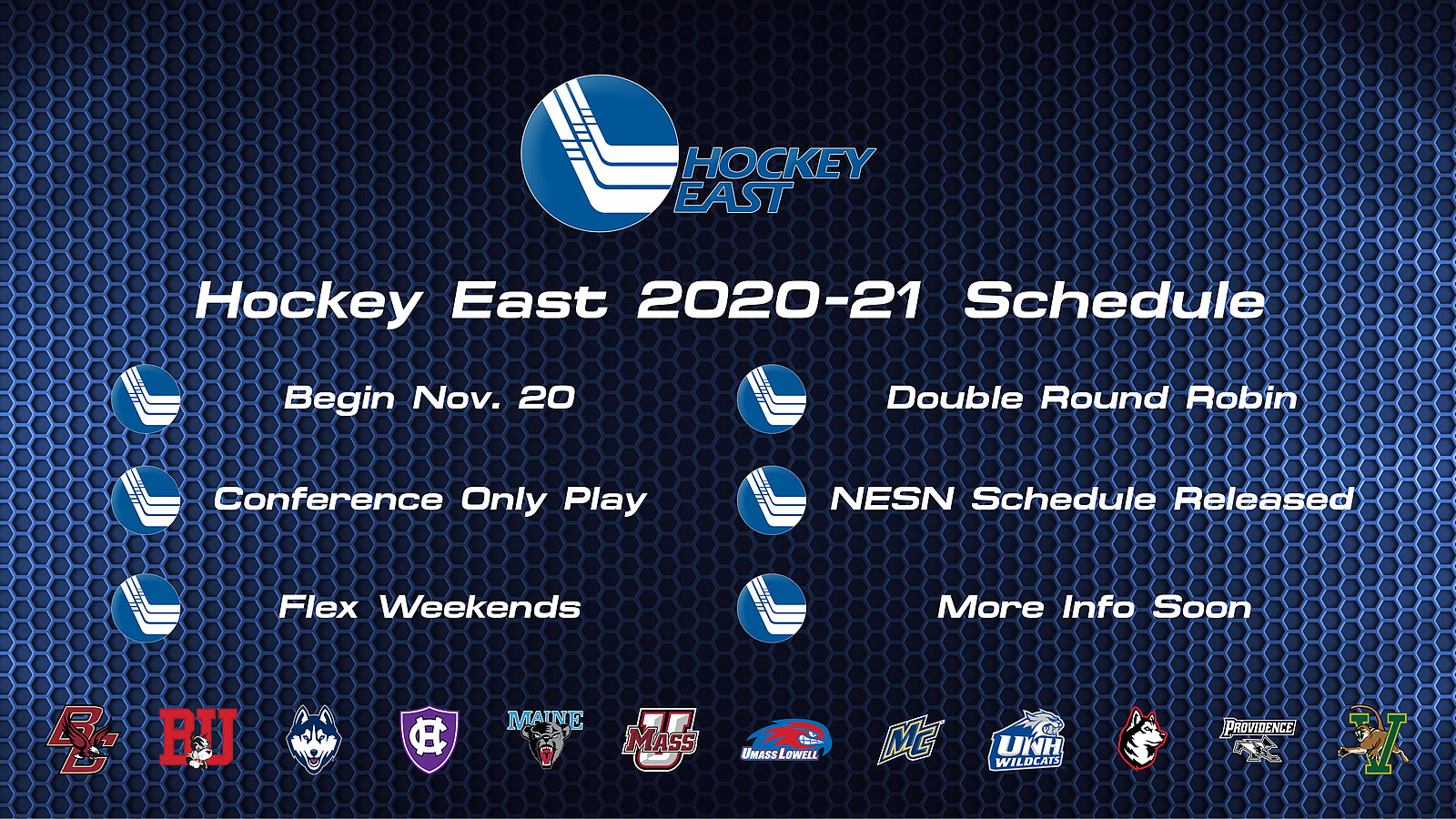 WAKEFIELD, Mass. - The Hockey East Association announced today details for its Return to Play plan for the 2020- 21 season, including composite league schedules, featuring a double round robin format. League play will begin on Friday, November 20 for both leagues. Hockey East also announced its NESN schedule through January 1 and news that other games streamed through its partnership with ViacomCBS Digital will be made free to fans all year.

âWeâre excited to make this announcement today, and very appreciative of all the hard work by so many in making it happen,â said Hockey East Commissioner Steve Metcalf. âWeâve worked closely with all our member institutions in establishing protocols in an effort to play as safely as possible, while also giving our teams a complete and meaningful season.â

Three of the final five weekends of regular season play in each league are designated as Flex Weekends. These Flex Weekend contests are tentative and opponents may be adjusted in order to maintain a competitively balanced schedule for each team. If games are postponed during the regular season, these Flex Weekend games will be rescheduled with those postponed games. Any games played during Flex Weekends will be designated as ânon-conferenceâ games and will not count toward the Army ROTC Hockey East Standings. Additional Flex Dates have been added throughout the schedule where availability allowed to maximize flexibility to play a full regular season schedule and prioritize the student-athlete experience.

Team schedules were created to best ensure a double round robin regular season for each program. Efforts were also made to align menâs and womenâs schedules to mitigate instances where multiple campus populations come into close contact in a single weekend.

The schedules were created in consult with Hockey Eastâs Return to Play Task Force. The Hockey East Return to Play Task Force, comprised of conference and school administrators, team physicians, athletic trainers, facility staff, and equipment managers met consistently over the last several months before making recommendations to league Athletic Directors. A critical component of the RTP protocol was a vigorous testing program for the teams, staff, and officials. The groupâs work, recommendations, and guidance will be released at a future date prior to the start of the season and published on the leagueâs website, HockeyEastOnline.com.

âThe Return To Play Task Force has done an incredible job creating league wide protocols which will give us the best chance of having a safe and successful season,â said Metcalf.

Hockey East will once again partner with NESN and ViacomCBS Digital to provide fans across the world the opportunity to view every single Hockey East game in the 2020-21 season. Today, Hockey East announced a slate of games that can be seen on NESN through January 1, as well as news that all other streamed games will be made available to fans for free on one of ViacomCBS Digitalâs platforms. Full television schedule details and How-To-Watch information about streamed games, as well as specific game times, will be an nounced in the coming days.