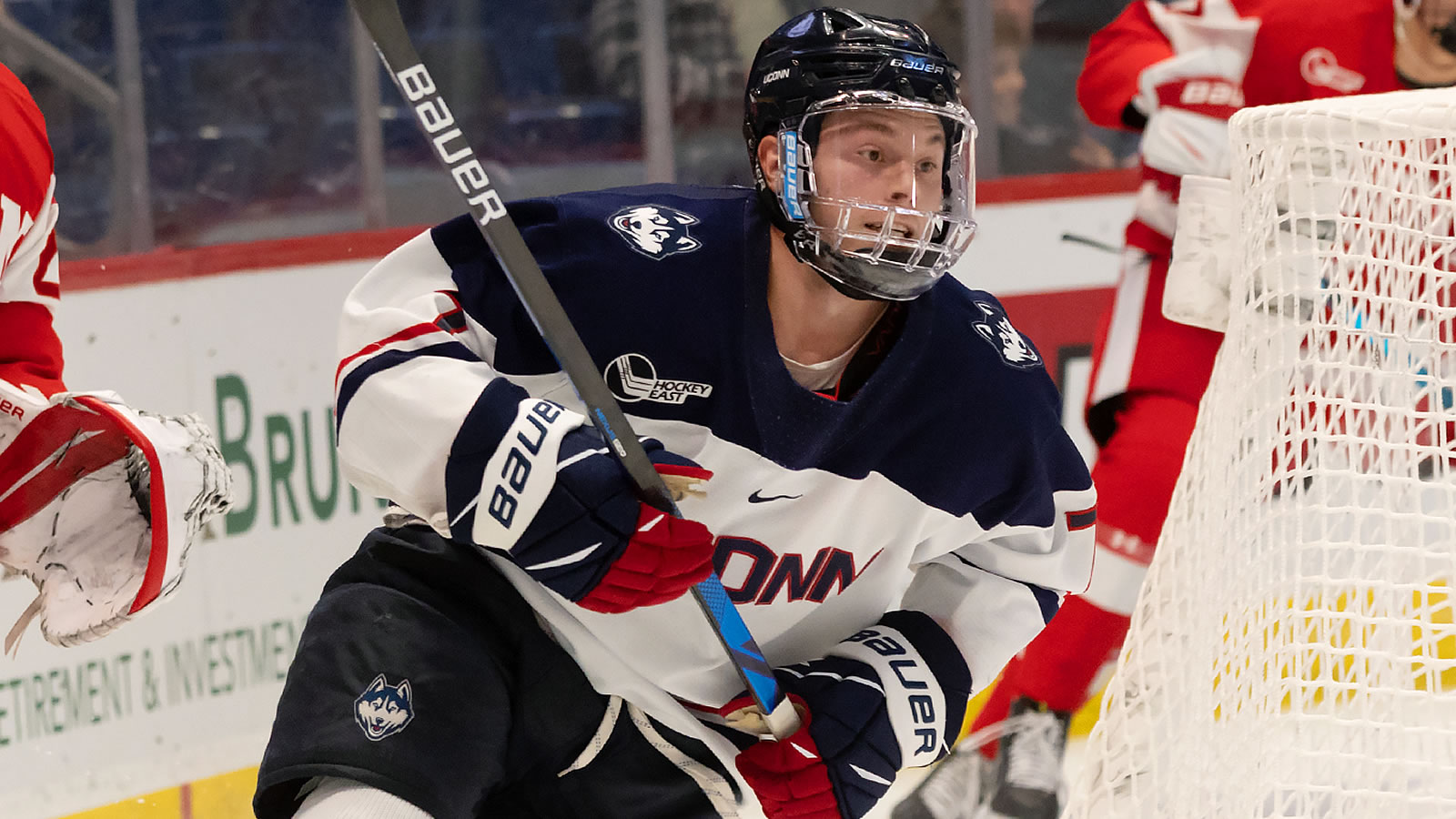 HARTFORD, Conn. - The UConn Huskies scored three goals in a span of 1:45 in the third period on the way to knocking off No. 19 ranked Merrimack Tuesday night at the XL Center in a Hockey East match up.

UConn senior Jonny Evans (North Delta, British Columbia) scored what proved to be the game-winner to cap off a three-goal rally that gave the Huskies a 3-1 lead at 4:14 in the third. Senior Jachym Kondelik (Budejovic, Czech Republic) scored his seventh goal on the season and junior Roman Kinal (Waterford, Mich.) scored his second.

The Huskies need to fend off a late surge by the Warriors that included killing off a power play with 1:45 left in the third and Merrimack with an empty net and 6-on-4. Grad student Darion Hanson (East Bethel, Minn.) made three of his 18 saves in that final stretch and the Huskies held on for the 3-2 win.

After two scorless periods, Merrimack's Liam Walsh opened the scoring just 1:07 into the third. The Warriors got a power play goal from Steven Jandric to pull within 3-2 at 12:05.

UConn held a 29-20 edge on shots while Hugo Ollas stopped 26 for Merrimack.

The two teams skated to a scoreless first period with shots favoring the Huskies, 8-5. Merrimack got a power play just 16 seconds into the game but were held to just one shot on net.

The Huskies put 13 shots on Ollas in the second but couldn't crack the goaltender. Both teams came up empty on power play chances in the second and the game would go to the third scoreless.

It took just 1:07 into the third period to produce the game's first goal as Merrimack's Walsh found the back of the net for the sixth time this year. Ivan Zivlak blasted a shot wide and the rebound off the back boards found Walsh on the right side who finished on the open net for a 1-0 lead.

UConn answered at 2:29 and rang off three-straight in the blink of an eye to take the lead back for good. Coming on their second power play of the night, Kondelik was able to put home a rebound off a Vladislav Firstov (Yaroslavl, Russia) shot near the left post to tie it at 1-1.

UConn took the lead at 2-1 on a Kinal goal at 3:12, again coming off a rebound in front. Freshman Chase Bradley (St. Louis, Mo.) fired on Ollas with the rebound finding Kinal in the left circle and he fired to the far post for his second.

Evans got some puck luck for his fourth on the year as a dump in by freshman Jake Veilleux (South Windsor, Conn.) came off the board and hit the side of the net, sitting in front of Ollas who couldn't play it before Evans swooped in to blast it home for a 3-1 edge.

Merrimack pulled within 3-2 at 12:05 as Jandric buried a one-timer chance off a feed from Max Newton on the power play, his fourth of the season. A late penalty on the Huskies at 18:15 set up the Warriors with a chance to pull the goalie for a 6-on-4 power play but the UConn defense held and Hanson stopped three shots to preserve the win.

The Huskies will take part in the 2022 Connecticut Ice Festival this weekend at Webster Bank Arena in Bridgeport. UConn will take on Yale in the first game on Saturday at 3:30 pm followed by the defending champion Sacred Heart and Quinnipiac at 7 pm.