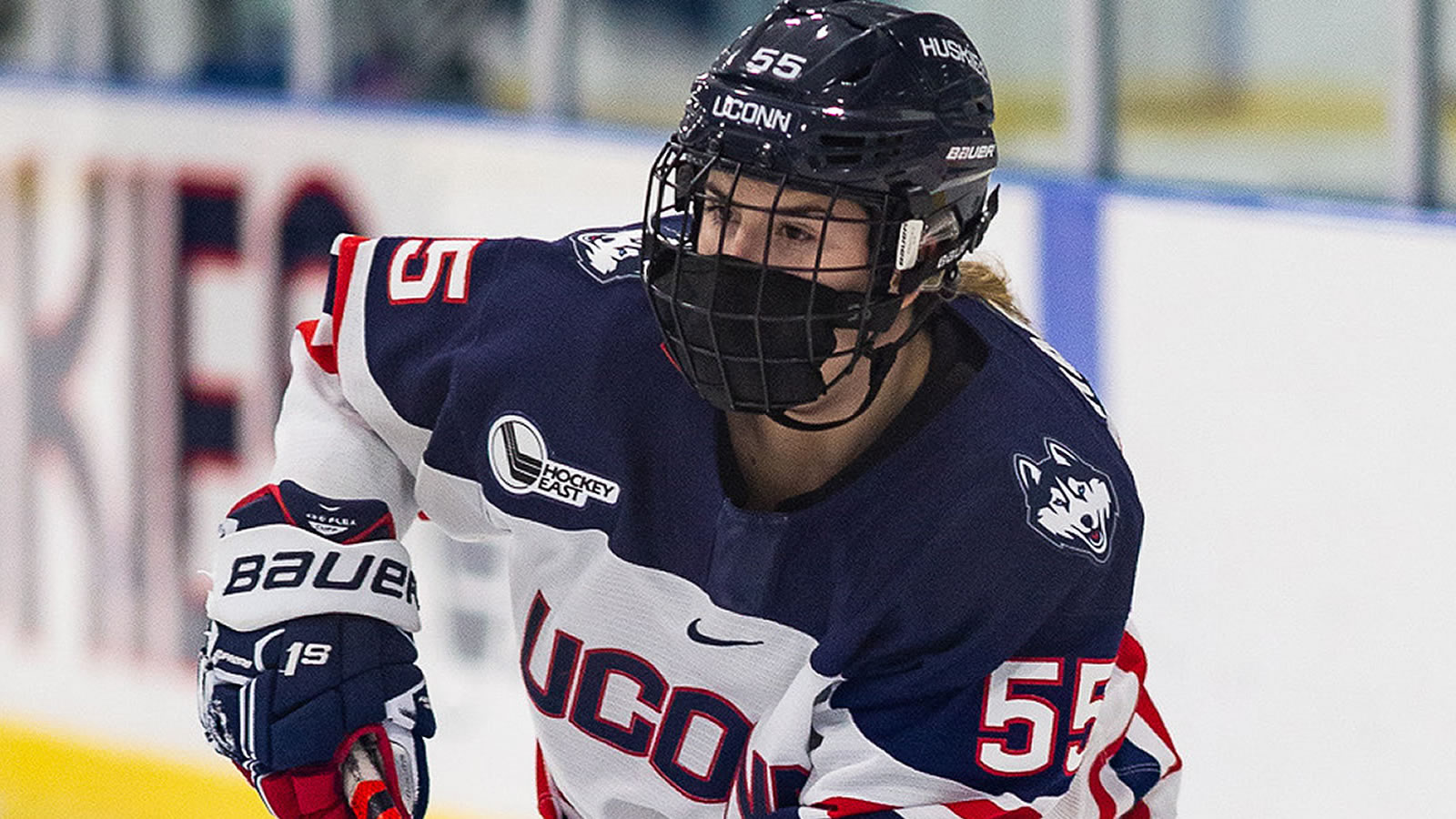 UConn improved to 4-0-0 to start the season for the first time in the Hockey East era (since at least 2002-03) after a weekend road sweep of RIT. Viki Harkness racked up five points (4g, 1a) to help power the Huskiesâ offense. Harkness scored two goals in each of UConnâs victories, adding an assist in Saturdayâs 6-2 triumph.

Sandra Abstreiter (Freising, Germany) made 56 saves on 57 shots in a pair of Hockey East wins to begin her season 2-0-0 as #10/10 Providence earned a spot in the national polls for the first time this season. The graduate student kicked out 23 stops in a 3-1 win over New Hampshire on Friday afternoon and followed up with a flawless 33 saves in a shutout of #2/2 Northeastern on Saturday evening.

Boston College earned its first win of the 2021-22 league schedule with a 2-1 victory at Merrimack.Willow Corson scored the game-winning goal while first-year Katie Pyne scored the first of her collegiate career in the win.

Maine swept the Sharks of LIU in a two-game road set, 4-2 and 3-2. Maine had six different players score a goal in the two contests. Taylor Leech had two goals, while Celine Tedenby led all Black Bears with four points on the weekend (1g, 3a). Maddie Giordano (1g, 1a) also had two points.

Viki Harkness (Berwick, Ont.) racked up five points (4g, 1a) to help power the Huskiesâ offense to a weekend sweep of RIT on the road. Harkness scored two goals in each of UConnâs victories, adding an assist in Saturdayâs 6-2 triumph. Over the weekend, she wrapped with six shots on net and a plus-four rating. Her performance has helped UConn to its best start in Hockey East history. 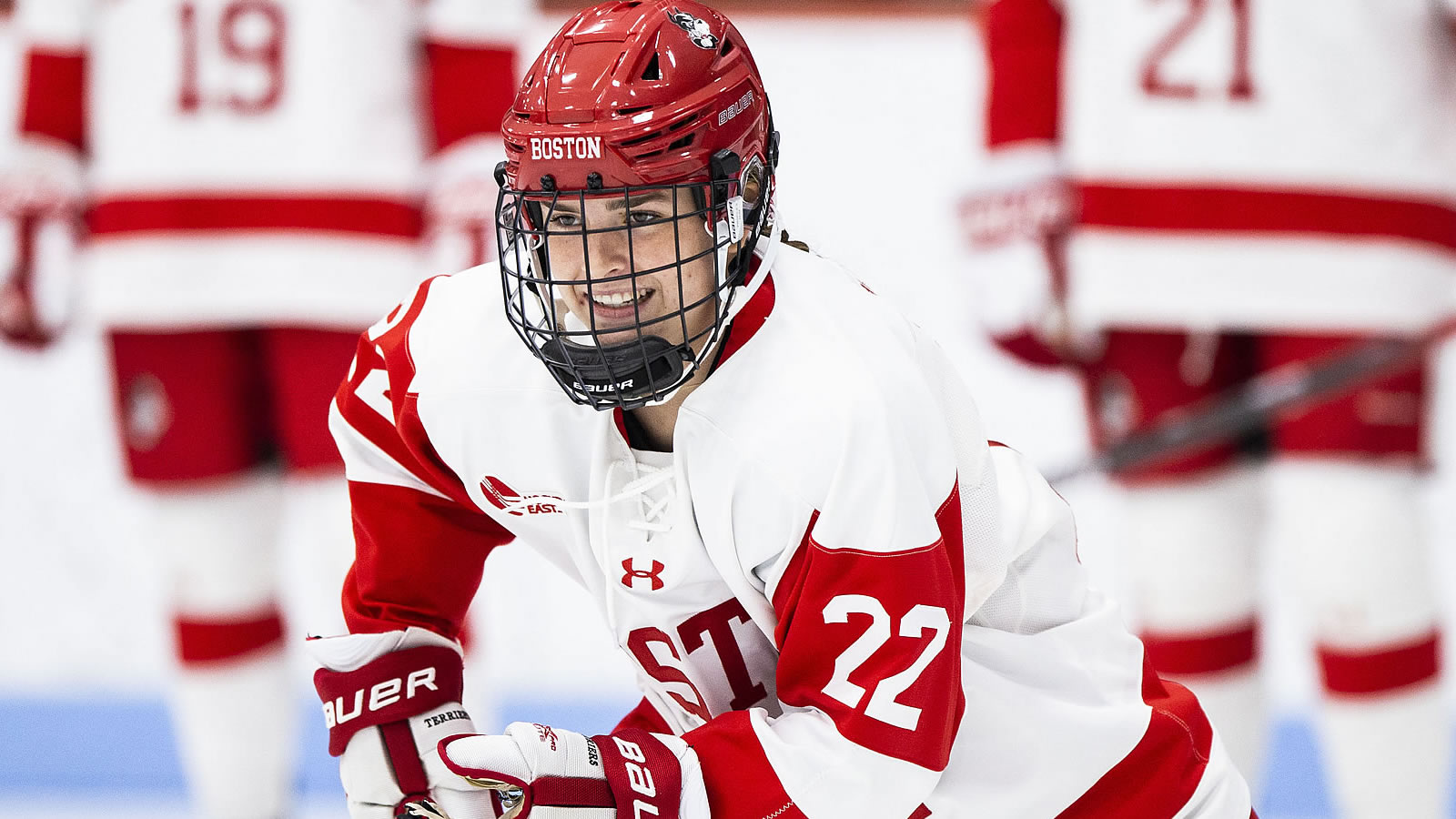 Christina Vote (Arlington, Mass.) notched her first two collegiate goals this weekend for Boston University. Her first NCAA goal proved to be the game-winning strike in the Terriersâ victory over #2/2 Northeastern on Friday. She also lit the lamp at UNH on Saturday. 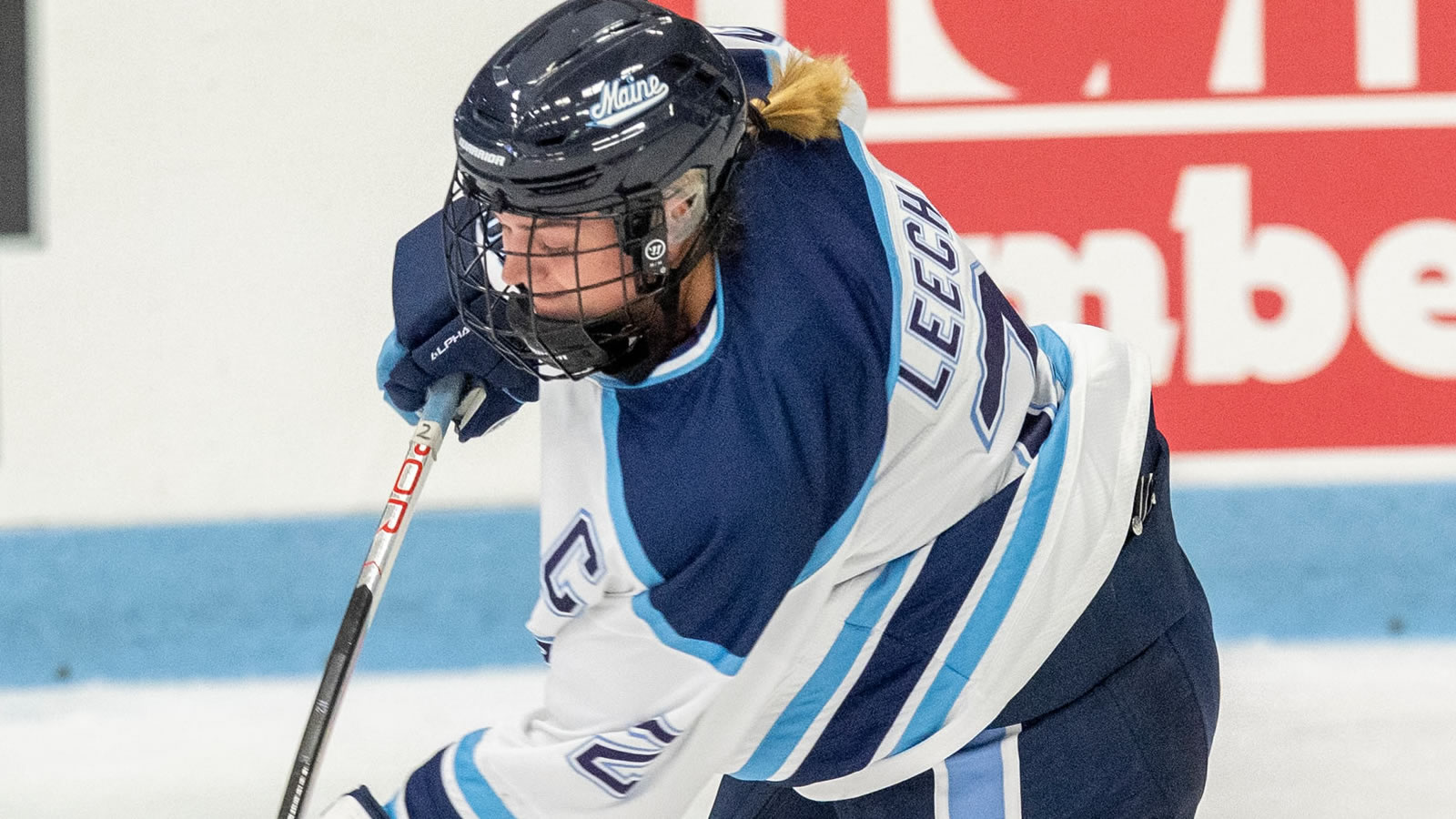 Taylor Leech (Bowdoinham, Maine) tallied two goals on the weekend, including her first goal of the season in Fridayâs 4-2 road win at LIU that proved to be the game-winning strike, coming at 2:18 of the third period. Her second marker came during a power-play on Saturday to help power the Black Bears to a weekend sweep of the Sharks with a 3-2 victory. 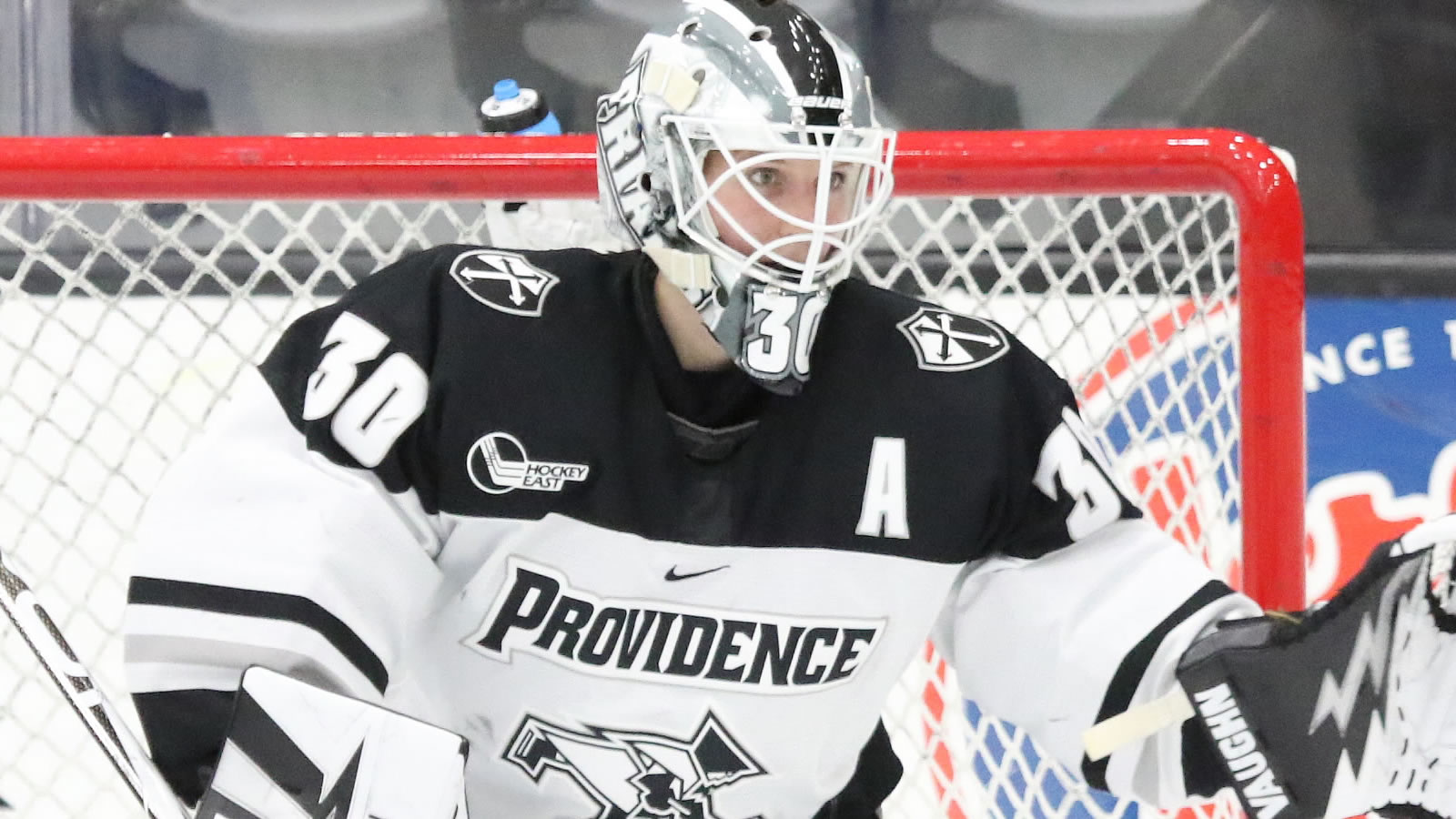 Sandra Abstreiter (Freising, Germany) made 56 saves on 57 shots in a pair of Hockey East wins to begin her season 2-0-0. The graduate student kicked out 23 stops in a 3-1 win over New Hampshire on Friday afternoon and followed up with a flawless 33 saves in a shutout of #2/2 Northeastern on Saturday evening.

Willow Corson, BC (Gr., F; Toronto, Ont.) Scored the game-winning goal in BCâs 2-1 win at Merrimack. She had two shots on goal on the Eaglesâ lone game this weekend.

Katie Pyne, BC (Fr., F; Cohasset, Mass.) Earned the first goal of her collegiate career and poured six shots on net in Boston Collegeâs 2-1 road victory at Merrimack on Saturday.

Alexie Guay, BC (Jr., D; Magog, Que.) Picked up an assist inc BCâs 2-1 win at Merrimack and also had one shot on goal and two blocked shots.

Courtney Correia, BU (Sr., F; Whitby, Ont.) Led the Terriers with three points (1g, 2a) this weekend in a win over #2 Northeastern and a 3-3 tie with New Hampshire. Correia scored the final goal of the tie at UNH as part of a two-point day.

Julia Shaunessy, BU (So., D; Marshfield, Mass.) Found the back of the net in the Terriersâ 2-1 win over #2 Northeast- ern. She also blocked five shots in two games this weekend, including three against Northeastern.

Kate Stuart, BU (Sr., G; Chilliwack, B.C.) Was instrumental in the Terriersâ 2-1 triumph over #2 Northeastern on Friday. She made 35 saves, including on a couple point-blank chances late in the third period to preserve the victory. She also made 30 saves against UNH. These were Stuartâs first two starts of the season.

Danielle Fox, UC (Sr., F; Unionville, Ont.) Registered three points on two goals and an assist in a 6-2 win over RIT on Saturday. She also recorded three shots in Fridayâs outing and nine in the weekend sweep. Her two tallies both came on the power-play while her second marker proved to be the game-winning strike.

Celine Tedenby, ME (Sr., F; ÃrnskÃ¶ldsvik, Sweden) Picked up four points (1g, 3a) on the weekend for the Black Bears, helping Maine to a sweep of LIU. She handed out two assists in Fridayâs 4-2 win and followed up with a one-goal, one-assist outing in a 3-2 victory. The senior netted the game-winning goal at 10:23 left in the third period on Saturday.

Alyssa Wruble, ME (Fr., F; Bethlehem, Pa.) Scored her first collegiate goal in a 3-2 victory over LIU on Saturday. She found the back of the net just 1:47 into the opening period.

Jordan Mattison, ME (So., G; Fenwick, Ont.) Entered the net in relief for the Black Bears, stopping all nine shots she faced in the final two periods of Fridayâs road victory, her first collegiate win. The sophomore netminder then started and Saturday, stopping 15 of 17 shots faced to pick up her second career win in as many appearances.