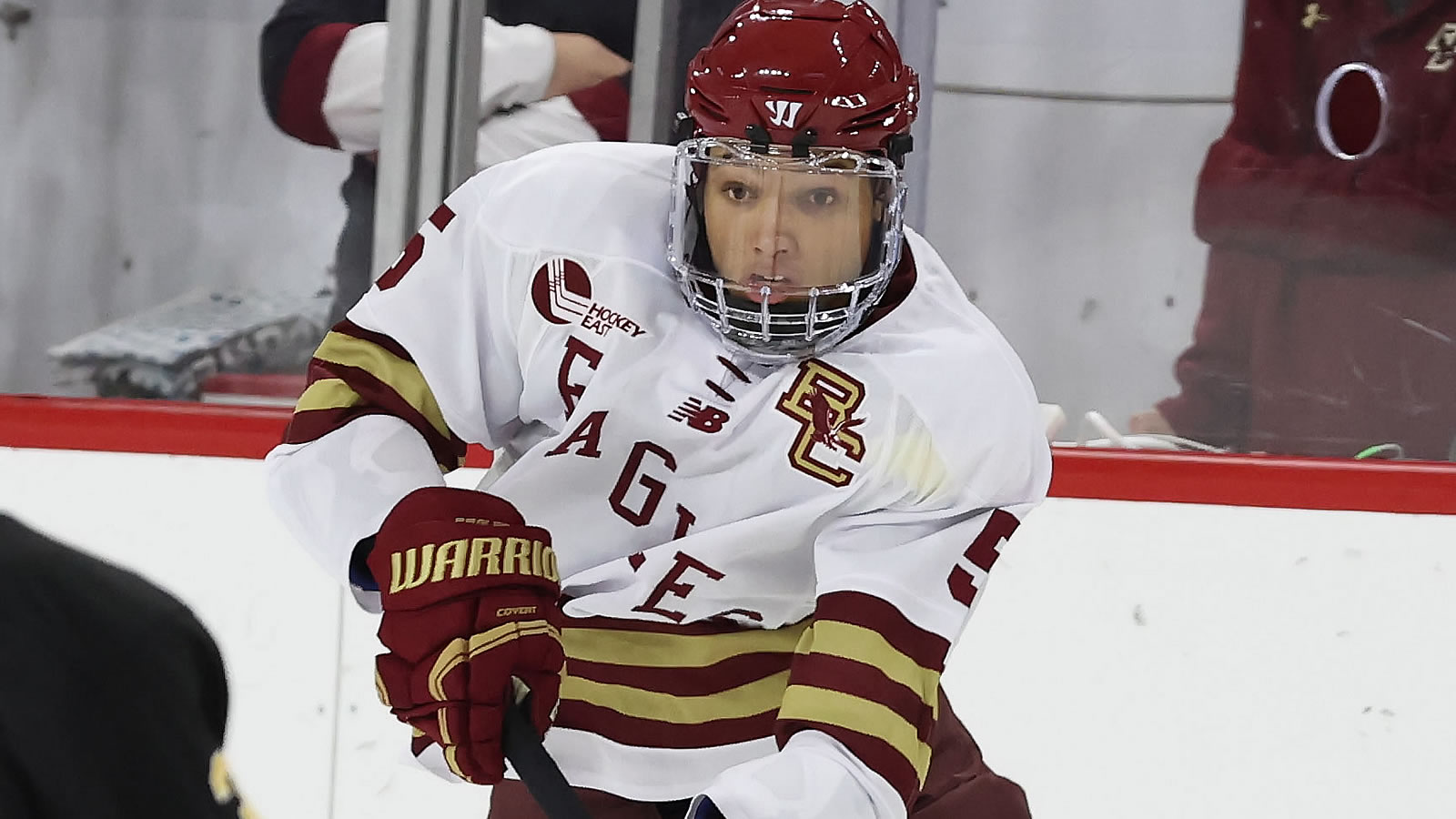 Boston College earned the title of 2021 Ice Breaker Champion as the Eagles began their 100th season of play with a 1-0-1 weekend against #9/9 Quinnipiac and Holy Cross. Marshall Warren registered three points (1g, 2a) and set up the first goal of the game against Quinnipiac just 55 seconds into the contest. Marc McLaughlin potted two goals in the first 11:54 of Saturday nightâs 5-1 victory over Holy Cross.

The Hockey East season began on Thursday as Providence took a 5-2 victory over Merrimack in Rhode Island. Friarsâ sophomore Brett Berard totaled a goal and two assists and is tied for first in Hockey East in overall scoring with five points (3g, 2a) in three games. Providence has scored 17 goals through its 3-0-0 start to the year.

Merrimack defender Declan Carlile was the story for the visitors with a pair of goals to pace the offense on Thursday and had another plus-two effort Saturday in a win over Sacred Heart to claim the team lead in goals, points, and plus/minus for the weekend.

New Hampshire started the season with a two-game sweep of Union, moving to 2-0-0 for the first time since 2017-18. Filip Engaras posted two goals and one assist for three points in the series.

Northeasternâs Devon Levi earned his second shutout in as many starts with a 20-save performance on Friday night, backboning the Huskies to a 3-0 win over Holy Cross.

Marshall Warren (Laurel Hollow, N.Y.) registered three points (1g, 2a) to help lead the Eagles to the IceBreaker Tournament title. He fired 10 shots on net in the two games and added a plus-three rating in a 1-0-1 weekend for Boston College. His tally on Saturday proved to be the game-winning strike in a 5-1 win over Holy Cross that claimed the first trophy of the sea- son for Hockey East. He also set up the first goal of the game against #9/9 Quinnipiac just 55 seconds into the contest. 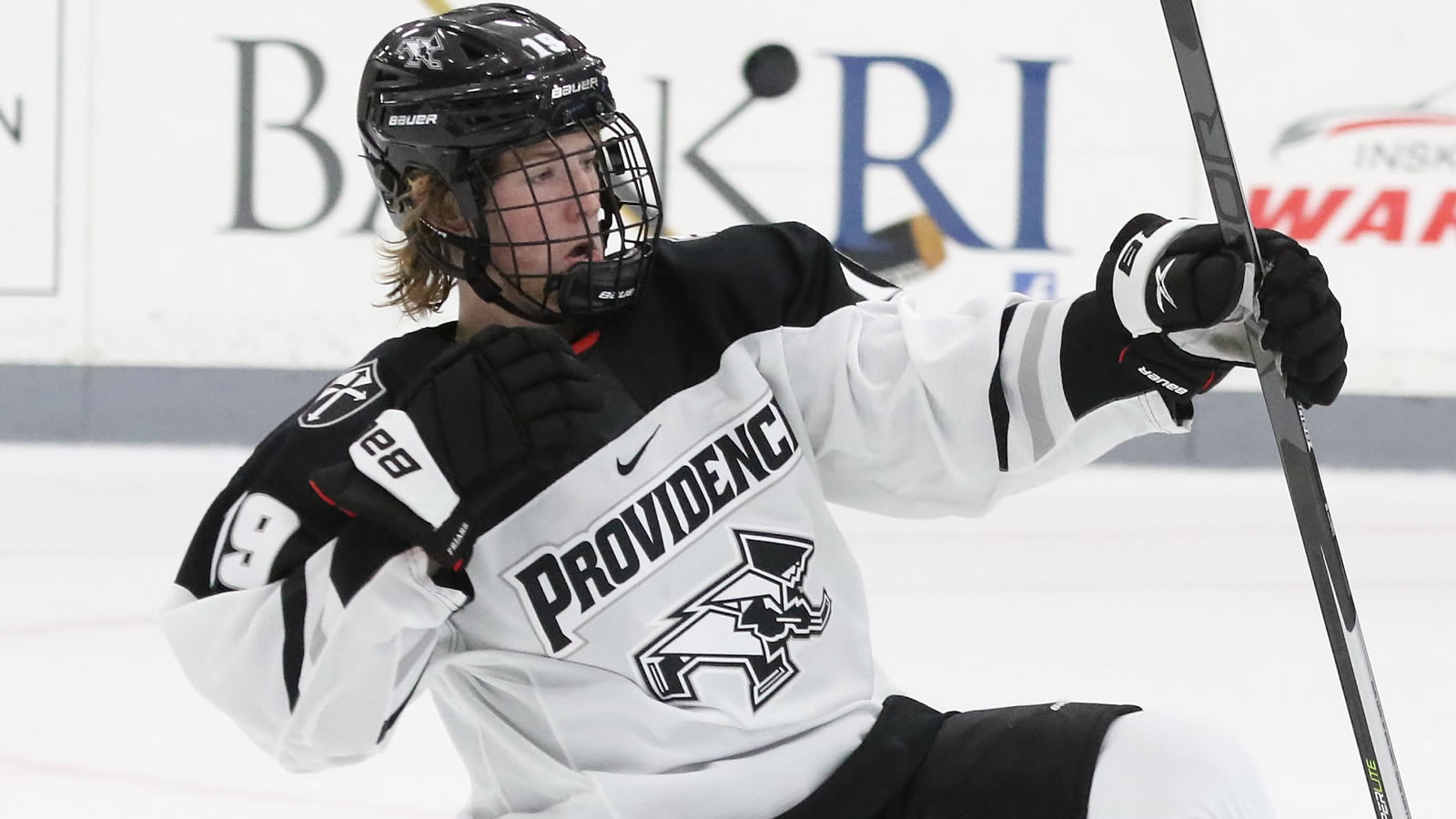 Cody Monds (Brockville, Ont.) recorded three points (1g, 2a) across two victories for the Friars this past week as the Providence offense exploded for 10 goals. The freshman notched the game-winning goal and added an assist in Providenceâs 5-2 win over Merrimack to open the 2021-22 Hockey East league schedule before adding an assist in Saturday nightâs 5-1 win at AIC. 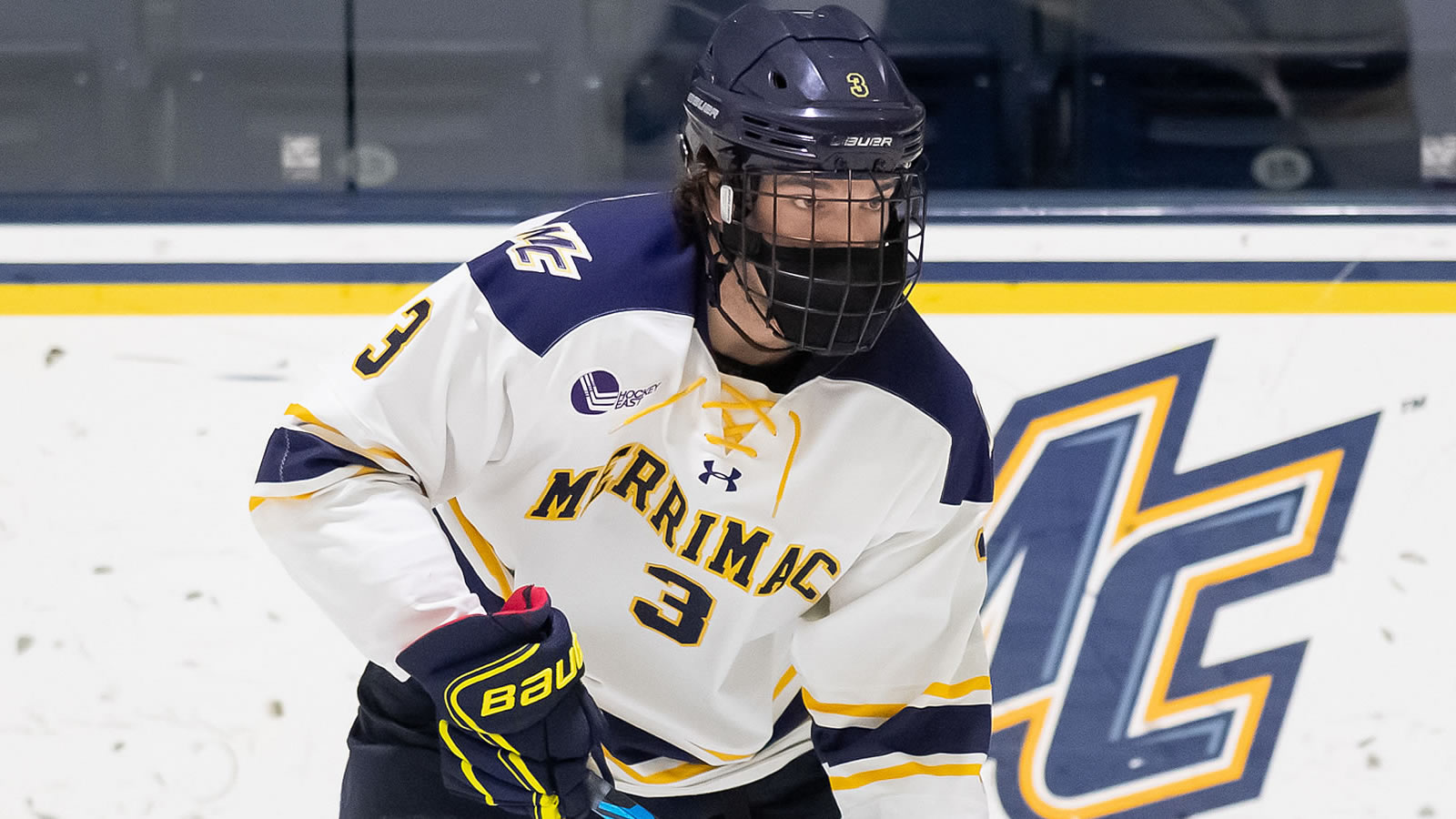 Declan Carlile (Hartland, Mich.) lit up the stat sheet over the weekend for the Warriors. The junior blueliner had his first career multi-goal game Thursday night at Providence, scoring twice, and finished the game with a plus-two rating. He then notched a primary assist and had another plus-two effort Saturday in a win over Sacred Heart to claim the team lead in goals, points, and plus/minus for the weekend 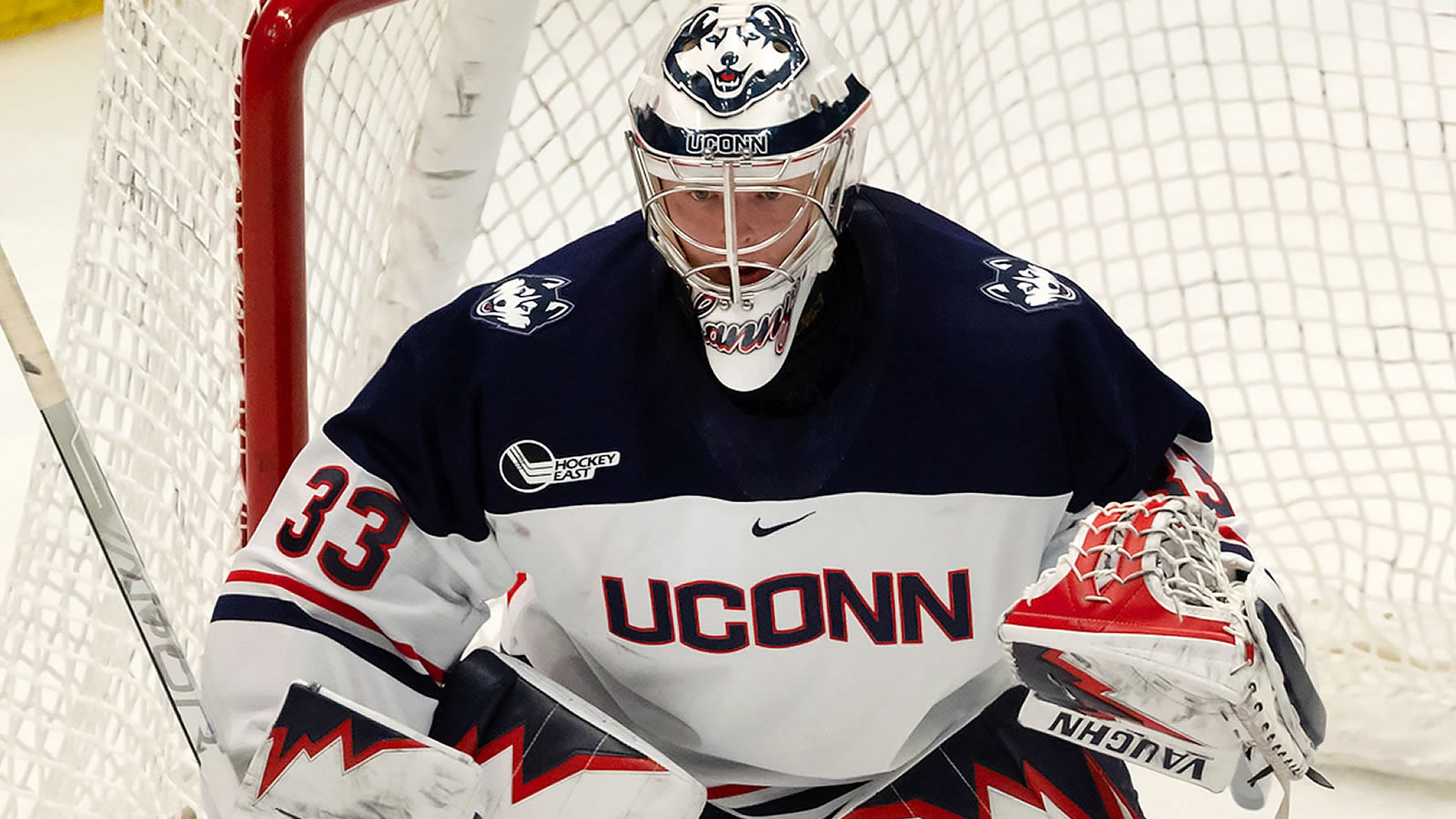 Darion Hanson (East Bethel, Minn.) got his first Hockey East win of the season, making 29 saves in Saturdayâs 5-1 road win, keeping BU off the scoreboard in the second and third periods. Over two games of work, Hanson stopped 72 of 75 shots faced. In Fridayâs loss, the graduate student stopped a season-high 43 of 45 shots

Marc McLaughlin, BC (Sr., F; North Billerica, Mass.) Potted two goals in the first 11:54 of Saturday nightâs 5-1, Ice-Breaker-winning victory over Holy Cross. He also won 18 of 32 faceoffs in a 1-0-1 weekend against the Crusaders and #9/9 Quinnipiac. He wrapped the tournament with seven shots on goal.

Matt Argentina, BC (Fr., F; Philadelphia, Pa.) Made his collegiate debut in Saturdayâs 5-1 win over Holy Cross, scoring a goal and adding an assist. He recorded a plus-two rating in the contest.

Eric Dop, BC (Gr., G; Lewis Center, Ohio) Stopped 31 of 33 shots in his Boston College debut against #9/9 Quinnipiac, a 2-2 draw. He kicked out 23 saves in the second and third periods combined against the Bobcats.

Jonny Evans, UC (Sr., F; North Delta, B.C.) Posted three points on the weekend as the Huskies split a league series with #10 BU. Evans picked up an assist on the Huskies lone goal in Fridayâs 2-1 loss to the Terriers and then came back on Saturday with a goal, the game-winner, and an assist in a 5-1 road win. Evans has had a point in all three games to start his 2021-22 season.

Carter Berger, UC (Jr., D; North Vancouver, B.C.) Scored his first goal on the season in Saturdayâs win at BU. In the two-game set with the Terriers, he picked-up a blocked shot and generated six shots.

Filip Engaras, UNH (Sr., F; Stockholm, Sweden) Posted two goals and one assist for three points as the Wildcats went swept a weekend series over Union. He recorded one goal and one assist on Friday in a 4-1 season-opening win, while on Saturday he netted another goal in UNHâs 3-2 victory.

Robert Cronin, UNH (Fr., F; Plymouth, Mass.) Made his collegiate debut on Friday, opening the season scoring for UNH to tie the game at 1-1 en route to a 4-1 Wildcatsâ win.

Aidan McDonough, NU (Jr., F; Milton, Mass.) Potted his third goal of the season in just three games in a 3-0 win over Holy Cross Friday night as part of the Ice Breaker tournament in Worcester.

Tommy Miller, NU (Gr., D; West Bloomfield, Mich.) Dished out two assists in a 3-0 win over Holy Cross Friday night and was named to the IceBreaker All-Tournament Team for his efforts.

Brett Berard, PC (So., F; East Greenwich, R.I.) totaled a goal and two assists in two wins last weekend. The sophomore dished out two helpers against Merrimack on Thursday, including setting up the game-winning strike on the power-play, and added a goal at AIC on Saturday night. Berard also poured 10 shots on goal and is tied for first in Hockey East in overall scoring with five points (3g, 2a) in three games.