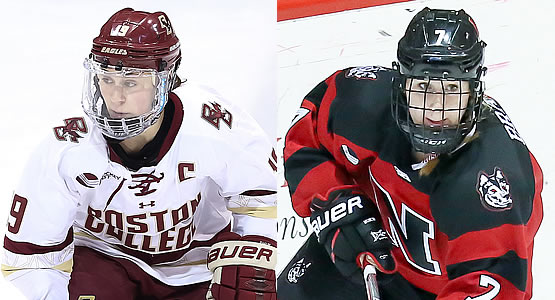 - #4 Boston College earned its 10th bid into the national quarterfinals with a 30-4-3 record this season. With the fourth overall seed in the tournament, the Eagles are set to host Ohio State at Conte Forum Saturday afternoon.

- Boston College's at-large bid secures their fourth consecutive stint as national quarterfinal hosts. It is the seventh time the Eagles have hosted as a top-four seed in the national tournament and they are undefeated when hosting the quarterfinals, claiming victory in 2011, 2012, 2013, 2015, 2016, and 2017.

- Boston College has moved on to the Frozen Four on seven occasions, including each of the last three seasons, and appeared in the national title game in 2016.

- Saturday's tilt will be the first matchup ever between Boston College and Ohio State. All-time, the Eagles are 10-19-2 against WCHA opponents, including a 2-0-0 record in 2017-18 against Minnesota Duluth at Conte Forum.

- It is Northeastern's second appearance in the national tournament (2016). The Huskies draw a road contest with No. 3 Colgate and will travel to face the team for the third time this season. Northeastern previously dropped each decision of a two-game road swing at Colgate, Oct. 14-15, 2017.

- Saturday marks No. 3 Colgate's first national tournament appearance in program history, earning an at-large bid with a 32-5-1 record. The Raiders finished the regular season with a share of the ECAC Hockey title, also a program first.