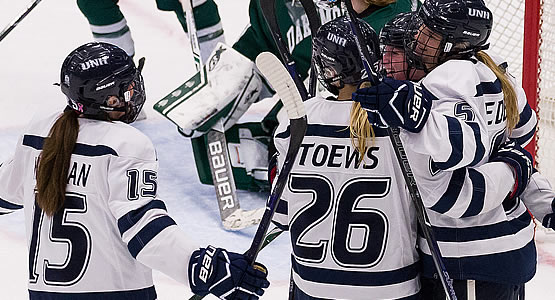 New Hampshire and Boston College battle in a home-and-home series this weekend.

- The Eagles are 8-0-1 at home this season, and currently have a 10-game unbeaten streak overall, remaining undefeated in the conference.

- The Wildcats and Eagles have met 72 times in their program history, and the Wildcats hold the advantage, 46-21-5, but more recently the Eagles have won the last 10 match ups against their Hockey East rival.

- UNH junior goaltender Kyra Smith (Littleton, Colo.), started her first two games of the season in December, making 29 saves in an overtime victory against Northeastern as well as 22 saves in her first shutout of the year against UConn. She has been named Hockey East Defensive Player of the Week after both weekends she started for the Wildcats.

- UConn and Merrimack currently sit tied for eighth in the Hockey East standings as the Huskies looking for their first win in conference play this season. The two programs each have four points in league play, four behind seventh-place Vermont. The top eight teams in the conference make the playoffs.

- UConn goes back on the road Tuesday to Boston to face Northeastern (10-9-2, 6-6-1 WHEA) and November WHEA Goaltender of the Month, Aerin Frankel (Briarcliff Manor, N.Y.). Frankel ranks 13th in the nation with a 1.93 GAA and sixth nationally with a .940 save percentage.

- Last time these two teams went head to head, Maine took a 4-2 win on Oct. 20 after jumping out to a 3-0 lead against the Terriers.

- Vermont had an early start to the second half of the season, playing three exhibition games in Quebec, Canada against a trio of Canadian Universities Dec. 29-31 and earning three victories. Mackenzie MacNeil (Richmond Hill, Ont.) was named this week's Women's Hockey East Player of the Week after scoring three goals and two assists in an 8-2 win over Ryerson.

- The Huskies have a busy week, playing three games in five days and five games in eight days. Five of UConn's next six are on the road before defending Storrs for a five-game home stand.

- Natalie Snodgrass (Eagan, Minn.) continues to pace the UConn offense with 11 goals and 20 points. The rookie most recently scored a goal and added an assist in the Huskies' recent 5-2 win at Dartmouth, earning Pro Ambitions Rookie of the Week accolades.

- Brown (2-14-0) is currently 0-2-0 when playing Hockey East teams this year. Boston University and Providence both defeated Brown by two goals when they faced the Ivy League school.