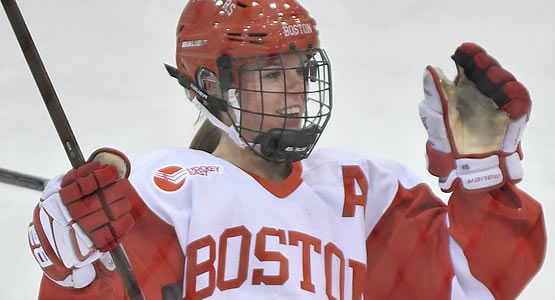 AROUND HOCKEY EAST: The first half of the season wrapped last weekend as all Women's Hockey East teams are now off until at least December 29, while league play will resume January 2 ... Boston University's Victoria Bach (Milton, Ont.) once again led the NCAA with six goals and seven points last weekend. The national player of the month for November scored four times in a 5-2 win over Yale on Thursday and followed up with a two-goal, one-assist showing in a 6-5 setback at Providence on Saturday. Friars rookie forward Maureen Murphy (Buffalo, N.Y.) picked up the decisive tally in Providence's victory and added an assist. She now has five points (3g, 2a) in her last two outings and factored in on the game-winning strike in each of those two tilts ... Boston College claimed victory in two league contests with Merrimack to move to 9-0-3 in conference play and stay three points ahead of second-place Providence. Caitrin Lonergan (Roslindale, Mass.) had a goal and three assists for the Eagles with rookie phenom Daryl Watts (Toronto, Ont.) posted three points and one assist in the two games ... New Hampshire skated to a pair of victories on the weekend, topping UConn, 3-0, before knocking down Yale, 3-2, in overtime. Junior Kyra Smith (Littleton, Colo.) picked up a 27-save shutout against UConn in her second start of the season, her first blank sheet since her freshman year. Devan Taylor (North Billerica, Mass.) enjoyed a three-point outing (1g, 2a) in Sunday's win over Yale, including setting up the game-winning goal in overtime ... Maine had a onegame trip to Vermont on Saturday, returning home with a 4-1 road win and extending its unbeaten streak to six games (4-0-2). Brooke Stacey (Kahnawake, Que.) picked up one goal and two assists to help the Black Bears offense while Carly Jackson (Amherst, N.S.) allowed only one goal and made 28 saves. 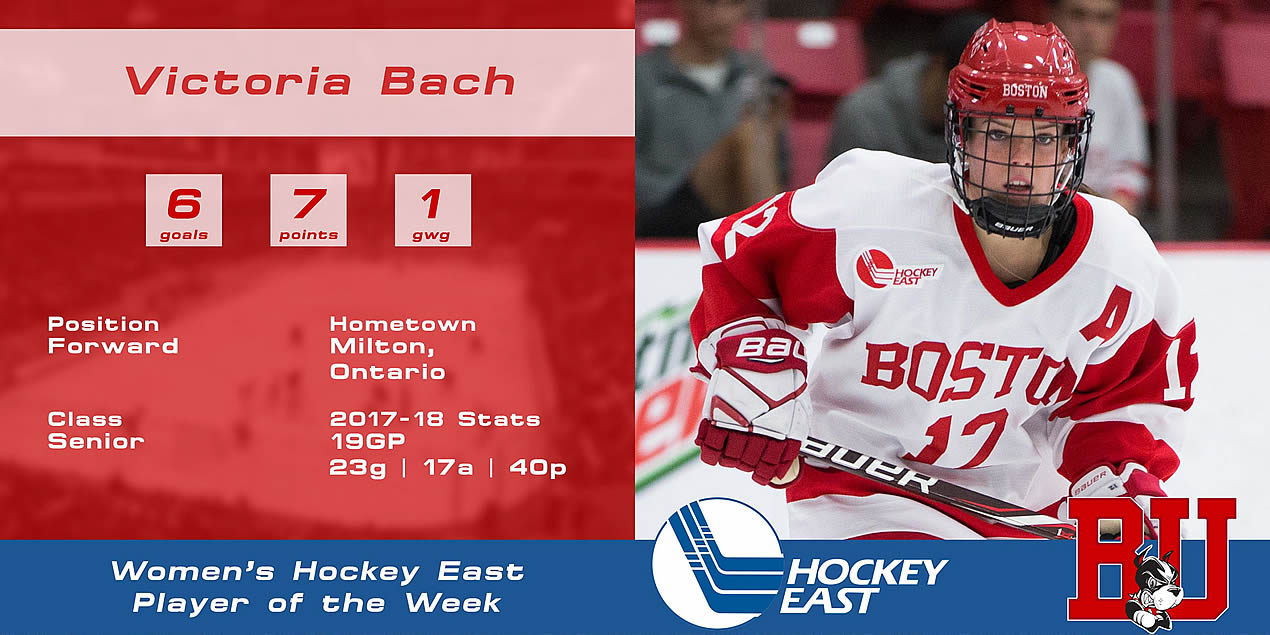 Victoria Bach (Milton, Ont.) led the country again with six goals, including her second four-goal performance of the season on Thursday at Yale. She tallied two more goals in a 6-5 setback at Providence Saturday. She had seven points (6g, 1a) and had at least three more goals than every other player in the NCAA last weekend. 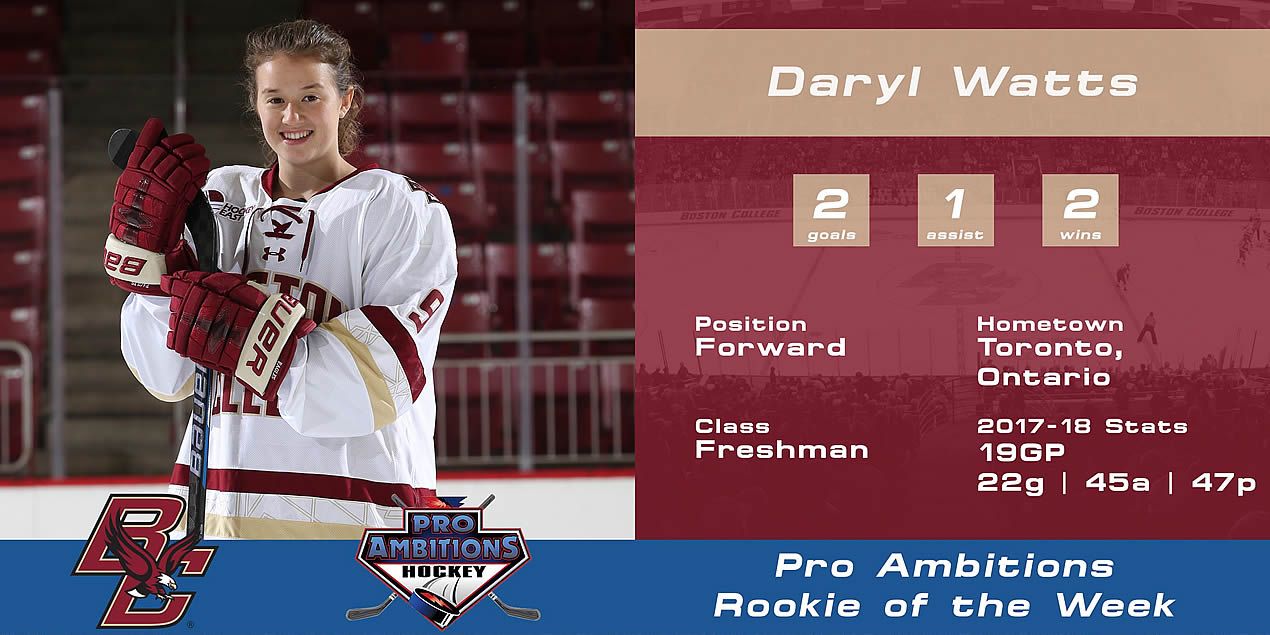 Daryl Watts (Toronto, Ont.) posted three points on two goals and one assist to lead WHEA rookies in scoring last weekend. She helped the Eagles to a pair of wins over Merrimack in a home-and-home series to extend her point streak to nine games (10g, 10a). 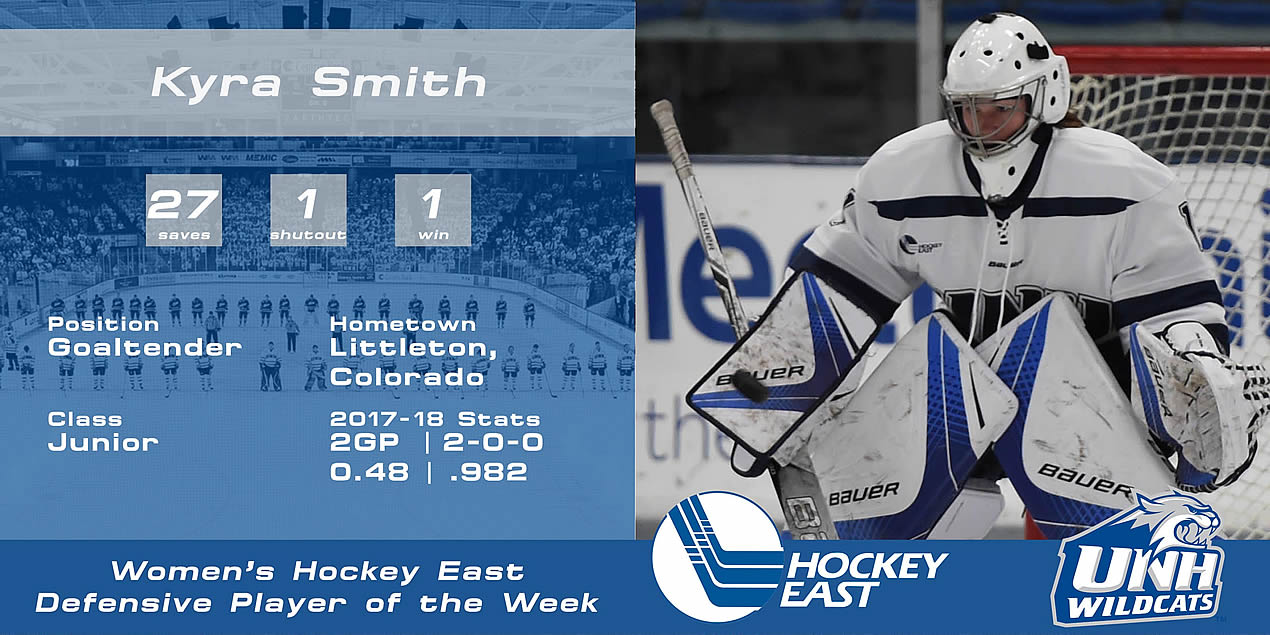 Kyra Smith (Littleton, Colo.) earned a shutout over UConn Friday, kicking out all 27 shots she faced. It was the first shutout of the season for New Hampshire and Smith's first shutout since her rookie campaign. In her two appearances this season, Smith is now 2-0-0 with a 0.48 goals against average and .982 save percentage.

Caitrin Lonergan, BC (So., F; Roslindale, Mass.) Had a goal and three assists in a 2-0-0 weekend against Merrimack.

Rebecca Leslie, BU (Sr., F; Ottawa, Ont.) Had an NCAA-best five assists, including three at Providence on Saturday. She's had at least two points in nine-straight games, the longest such streak in the country this year.

Brooke Stacey, ME (Sr., F; Kahnawake, Que.) Picked up one goal and two assists as she helped the Black Bears over Vermont, 4-1. She now has two goals and five assists against the Catamounts this year.

Devan Taylor, UNH (Jr., F; North Billerica, Mass.) Enjoyed a three-point outing (1g, 2a) in a 3-2 win over Yale Sunday, including setting up the game-winning goal in overtime. She also picked up two blocked shots and finishing plus-three on the week.

Maureen Murphy, PC (Fr., F; Buffalo, N.Y.) Scored the game-winning goal to lift the Friars over the Terriers on Saturday and added an assist.