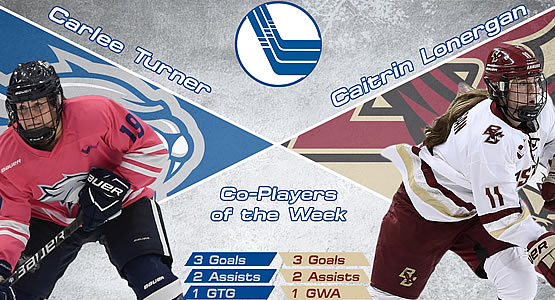 AROUND HOCKEY EAST: The New Hampshire Wildcats (6-1-3, 4-1-3 WHEA) took a 1-0-1 weekend over league rival Vermont to remain atop the Women's Hockey East standings into the month of November. Carlee Turner (Scottsdale, Ariz.) racked up five points (3g, 2a) for New Hampshire in the two games, including both Wildcat goals in a 2-2 tie on Friday. Defenseman Amy Schlagel (Blaine, Minn.) netted two goals in Saturday's 6-2 win and blocked five shots in two games on the weekend to help her team capture three league points. Vermont goaltender Sydney Scobee (Minnetrista, Minn.) stopped a career-high 42 shots in the 2-2 draw while New Hampshire rookie Ava Boutilier (Charlottetown, P.E.I.) kicked out her own career best of 39 in a 6-2 victory the next day ... #2 Boston College squared off with #9 Providence, taking a 7-4 win to improve its record against ranked opponents to 3-0-0 this season. Caitrin Lonergan (Roslindale, Mass.) racked up a pair of multi-point games, scoring twice and adding an assist in the 7-4 win over the Friars and registering another tally and assist in a 4-3 come-from-behind win over Syracuse on the road the next day ... Merrimack split the weekend series with Union, taking a 5-3 win on Friday. Courtney Maud (Georgetown, Ont.) scored her first two career goals for the Warriors in the victory, finding the net for back-to-back scores to secure the two-goal margin, including the game-winning goal and an empty-netter to ice the game. Goaltender Lea-Kristine Demers (Repentigny, Que.) stopped 19 pucks to collect the victory ... Boston University skated to a weekend split with RIT, earning a 5-1 win on Friday before dropping a 2-1 decision in overtime the next day. Rookie goaltender Corrine Schroeder (Elm Creek, Man.) allowed just three goals in the series, one coming on a penalty shot. Schroeder posted a .933 save percentage and a 1.50 GAA over the weekend, which ranked third and second, respectively, among all NCAA freshman goaltenders over the weekend ... UConn took a 1-0-1 weekend against RPI at home, including a 4-1 win and a 0-0 draw that saw sophomore netminder Morgan Fisher (Vernon, Conn.) pitch a shutout with a career-high 30 saves. The blank sheet was her second shutout of the season in just three games played as she boasts a 0.99 goals against average and a .962 save percentage. She has allowed just three goals and has stopped 76 shots ... Maine split a weekend home-and-home with Dartmouth, falling 3-0 Saturday before exploding for seven goals on Sunday in a 7-2 victory. Sophomore forward and reining Pro Ambitions Co-Rookie of the Year Tereza Vanisova (Strakonice, Czech Republic) registered four points, including a goal and three assists to pace the Black Bears in the win. 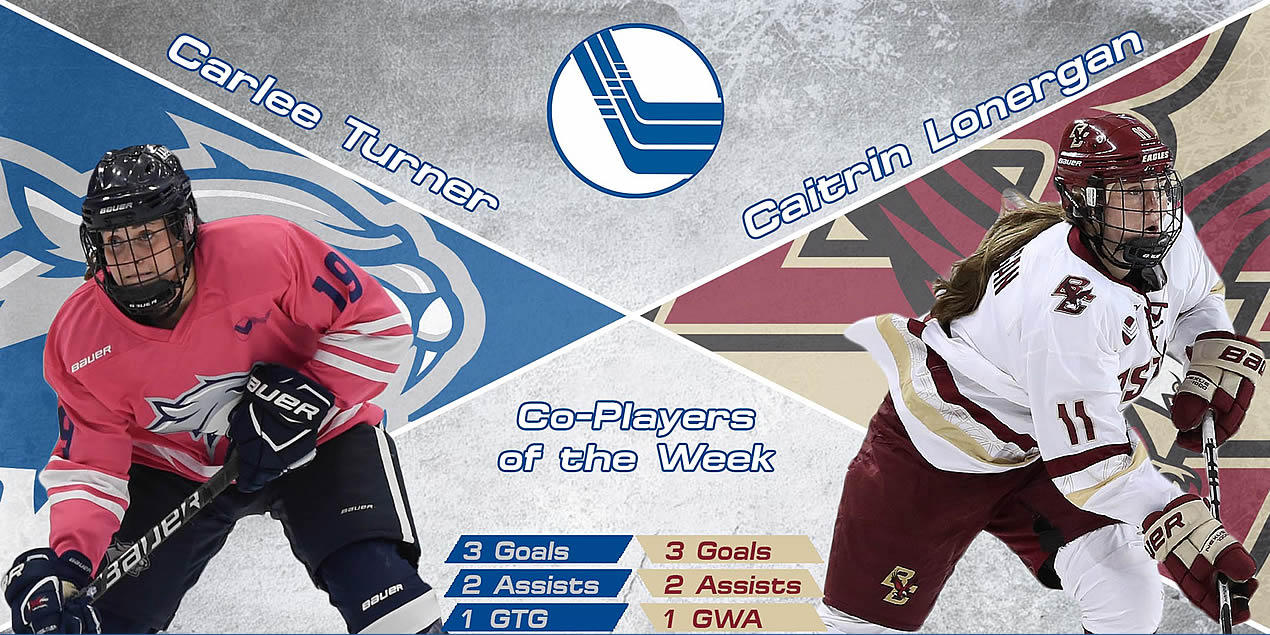 Carlee Turner (Scottsdale, Ariz.) had up five points (3g, 2a) in a 1-0-1 weekend in league play against Vermont. She scored both goals in a 2-2 tie Friday and had one goal and two assists in a 6-2 win the next day.

Caitrin Lonergan (Roslindale, Mass.) racked up five points (3g, 2a) on the weekend, including a two-goal, one-assist outing in a 7-4 win over #9 Providence. She added another two points (1g, 1a) at Syracuse on Saturday to ride a nine-game point streak, including eight multiple-point games. 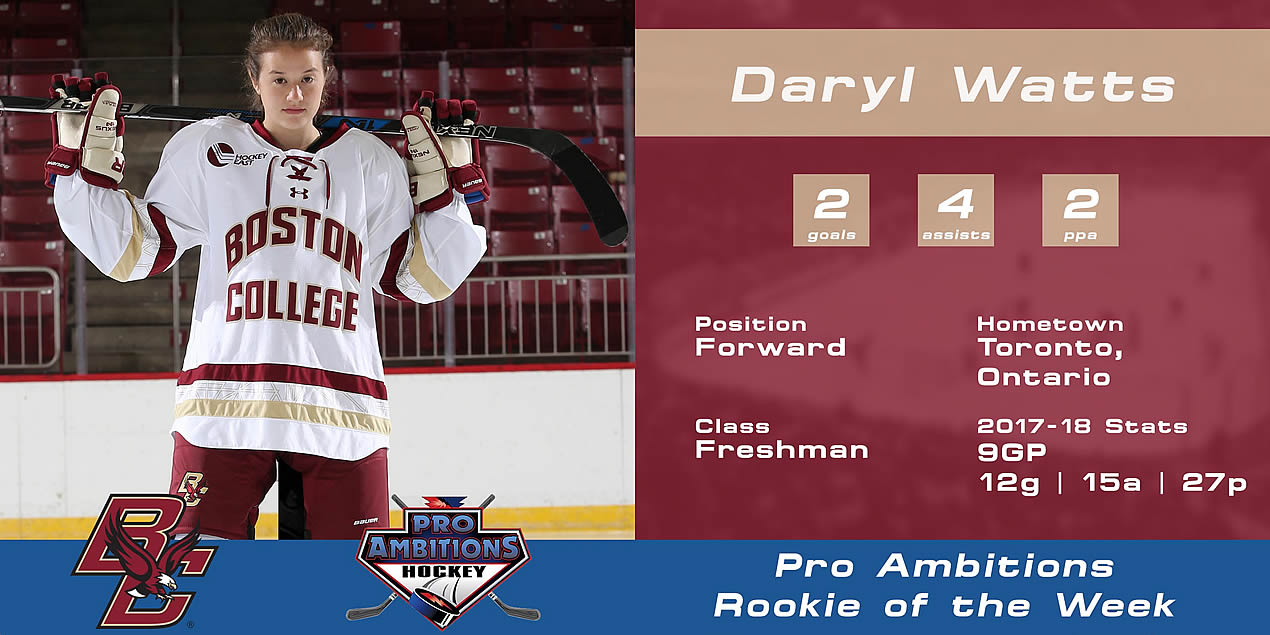 Daryl Watts (Toronto, Ont.) paced the NCAA with six points (2g, 4a) last week as she extended her national lead with 12 goals, 15 assists and 27 points. The freshman earned a goal and three assists in the 7-4 win over the Friars and scored and set up another tally in a 4-3 come-from-behind win at Syracuse. 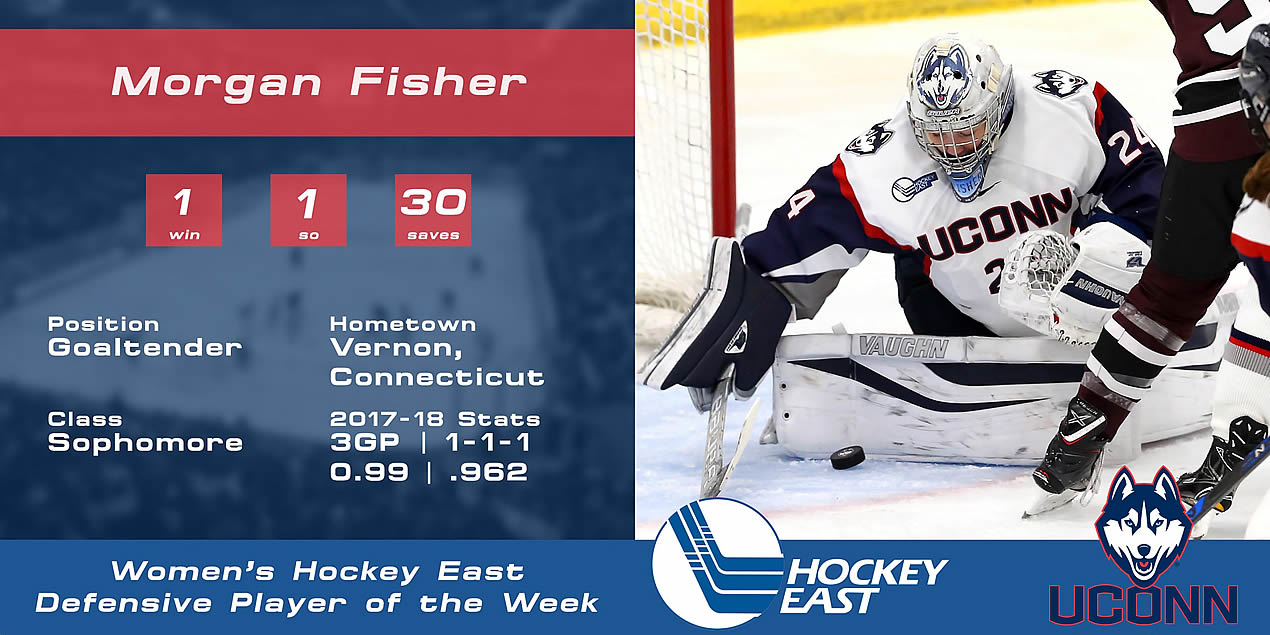 Morgan Fisher (Vernon, Conn.) kicked out a career-high 30 saves in a scoreless stalemate with RPI Saturday. The blank sheet was her second shutout of the season in three games played. For the season, she boasts a 0.99 goals against average and a .962 save percentage, having allowed just three goals and stopped 76 shots.

Corinne Schroeder, BU (Fr., G; Elm Creek, Man.) Allowed only three goals in two games, including one on a penalty shot, against RIT. She posted .933/1.50 numbers on the weekend, stopping 42 shots.

Catherine Crawley, UConn (So; F, Washingtonville, N.Y.) Assisted on the opening goal of a 4-1 win against RPI Friday, her fourth point of the season.

Natalie Snodgrass, UConn (Fr., F; Eagan, Minn.) Netted her team-leading fourth goal of the year in Friday's 4-1 victory and registered five shots on net. She leads her team in goals (4), assists (5), and points (9).

Ava Boutilier (Charlottetown, P.E.I.) went 1-0-1 in two conference match ups with Vermont, making 56 saves and allowing just four goals across the pair of outings. She made a career-high 39 stops in Saturday's 6-2 win against the Catamounts, earning a 1.92 goals against average and .933 save percentage to help the Wildcats stay at the top of the league standings.

Brooke Boquist, PC (Sr., F; Thunder Bay, Ont.) Scored a shot-handed goal and dished out an assist in a setback at #2 BC.

Kate Friesen, PC (Jr., D; Altona, Man.) Netted her second goal and eighth point in a loss at BC.