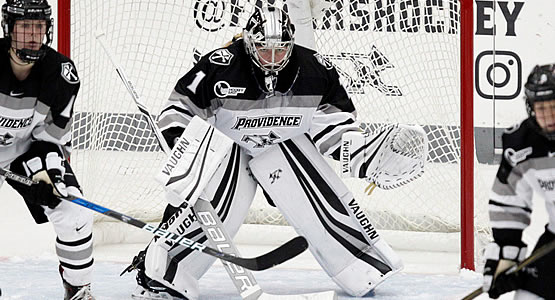 - Providence is coming off of a two-game sweep in a home-and-home series against Northeastern, including the Friars' first win over the Huskies since 2014.

- Vermont added two wins to their record (4-5-0) after sweeping Merrimack on the road last weekend. Taylor Flaherty (Lakeville, Minn.) scored one goal in both games against the Warriors to power the Catamount offense. The last time Vermont faced UNH, Flaherty scored one goal and chipped in one assist in a 5-4 overtime loss on Oct. 20.

- New Hampshire retains first place in the Women's Hockey East standings this week, as their record improved to 3-1-2 in conference play (5-1-2 overall). Last weekend, the Wildcats went 1-0-1, defeating Maine, 2-1, and tied Boston University, 2-2, at home. They will continue a six-game home stand for two tilts against Vermont.

- The Huskies will host RPI for a two-game series after a bye week. Following the Huskies' 2-2 draw against then-#3 Boston College, senior goaltender Annie Belanger (Sherbrooke, Que.) earned Women's Hockey East Defensive Player of the Week honors for her 45-save outing and handing the Eagles their first non-win of the season.

- Merrimack heads back into non-league competition for the penultimate time this season. After this weekend, the Warriors have just two non-conference games left on their schedule, a two-game home stand with Princeton on November 24-25.

- The Terriers will head to New York to face Rochester in a two-game series this weekend. Last time out, Corinne Schroeder (Elm Creek, Man.) made a career-high 42 saves in a 2-2 draw against New Hampshire.

- Terrier alumna Tara Watchorn, a 2014 Olympic gold medalist who scored the game-winning goal in overtime to deliver Boston University its first Women's Hockey East Tournament title in 2010, was named an assistant coach to Brian Durocher this week. Watchorn is the first former Terrier to return to her alma mater as a full-time assistant coach.

- Maine sets its sights on a two-game series at Dartmouth, after two setbacks to league rivals New Hampshire and then-#3 Boston College.