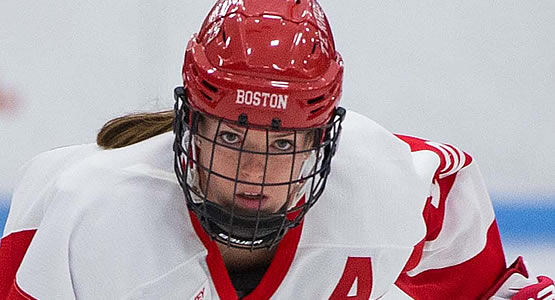 AROUND HOCKEY EAST: Boston University earned its first sweep of a league opponent of the season, topping Vermont in a pair of road games. Led by Victoria Bach (Milton, Ont./5g, 1a) and Rebecca Leslie (Ottawa, Ont./3g, 4a), the Terriers moved to 3-5-2 in conference play, good for sixth place and just three points out of a tie for second in the league. Bach's five goals were the most by any NCAA skater while Leslie picked up the most points in the country in the two outings ... Providence took a pair of wins over Merrimack last weekend, improving to 4-1-1 in its last six league contests. Cassidy MacPherson (Oakville, Ont.) racked up five points (2g, 3a) in the sweep of Merrimack and finished plusfive on the weekend, while Kate Friesen (Altona, Man.) had a goal and an assist in Friday's 4-1 victory before adding another helper in Saturday's 5-0 shutout, Providence's first of the season ... Boston College went 1-0-1 against league foe UConn, including the second time the Huskies earned a draw against the Eagles. Caitrin Lonergan (Roslindale, Mass.) had a four-point (2g, 2a) weekend while Daryl Watts (Toronto, Ont.) turned in a four-point (3g, 1a) performance of her own, including her third multi-goal game of the season. She now leads Women's Hockey East with 10 goals and 10 assists in league play. The Huskies' Natalie Snodgrass (Eagan, Minn.) registered two points (1g, 1a) in the 3-3 tie against #2 BC Saturday and leads the team in goals (8) and points (14) ... Northeastern and Maine traded shutouts in a weekend series at Matthews Arena in Boston. On Saturday, the Huskies rookie netminder Aerin Frankel (Briarcliff Manor, N.Y.) pitched a 39-save shutout against the Black Bears, marking the most saves in a shutout for a Husky netminder since 2010. The next day, Maine's second-year backstop Carly Jackson (Amherst, N.S.) turned in a blank sheet of her own, her first of the year and second of her career, with a 28-save shutout in a 2-0 win ... New Hampshire skated to a pair of 1-1 stalemates with RPI on the weekend. The Wildcats' freshman goaltender Ava Boutilier (Charlottetown, P.E.I.) made 65 saves across the two outings. 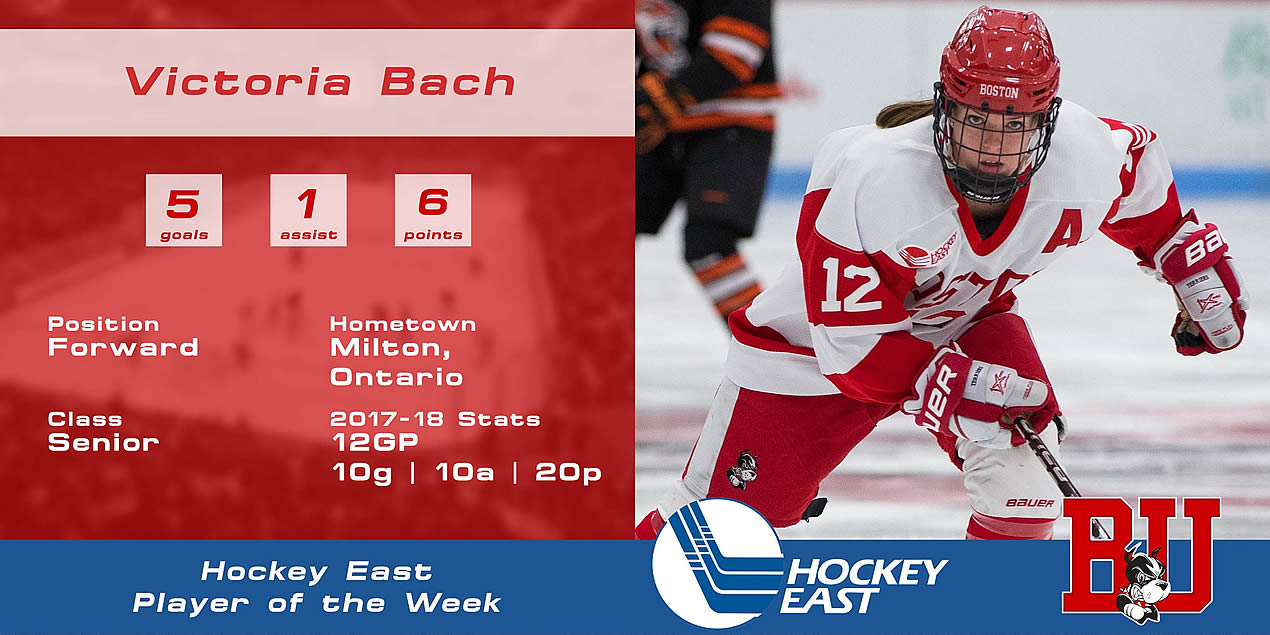 Victoria Bach (Milton, Ont.) led the NCAA with five goals on the weekend, including a four-score outing in a 7-1 victory over Vermont. The senior forward finished with a plus-eight rating in the two games over the Catamounts, a total that led the NCAA. 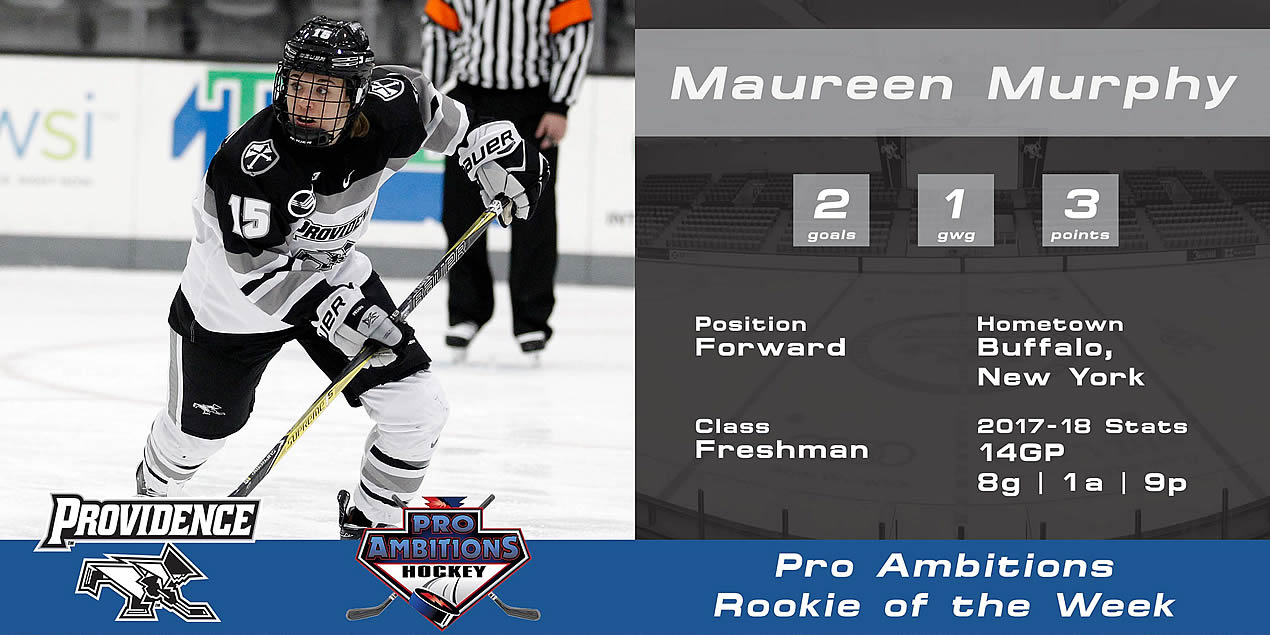 Maureen Murphy (Buffalo, N.Y.) enjoyed a three-point (2g, 1a) weekend as the Friars earned four points in league play against Merrimack. She netted goals in each of the two outings, including Saturday's game-winner, and got her first NCAA assist in the same game. Murphy has now scored a goal in three straight contests. 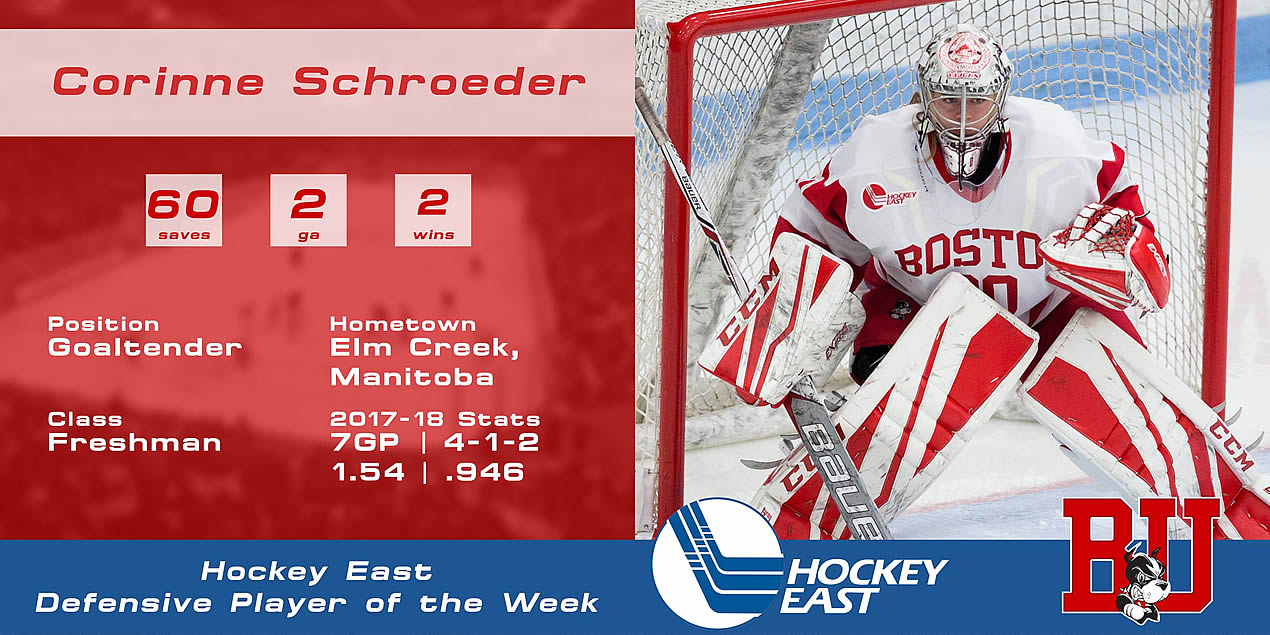 Corinne Schroeder (Elm Creek, Man.) stopped 60 shots in a pair of wins over the weekend, including 35 in a 3-1 victory on Saturday. The rookie netminder kicked out 33 saves in the third periods of her out appearances and allowed just two goals in 120:00 of play.

Daryl Watts, BC (Fr., F; Toronto, Ont.) Earned four points (3g, 1a) against UConn, including her third multi-goal game of the season. She now leads Women's Hockey East with 10 goals and 10 assists in league play.

Serena Sommerfield, BC (Jr., D; Greenwich, Conn.) Registered helpers in both games against the Huskies, surpassing her previous career-high for assists (7) just 13 games into the season.

Brooke Stacey, ME (Sr., F; Kahnawake, Que.) Scored each of Maine's two goals in a 2-0 shutout of Northeastern Sunday.

Maggie Blair, ME (Fr., D; Cornwall, Ont.) Picked up her first NCAA assist on the second goal of Sunday's 2-0 win.

Carly Jackson, ME (So., G; Amherst, N.S.) Earned her first shutout of the year with a 28-save blanking of Northeastern Sunday, a 2-0 win.

Aerin Frankel, NU (Fr., G; Briarcliff Manor, N.Y.) Pitched a 39-save shutout against Maine on Saturday and stopped 26 of 28 shots Sunday in a 1-1-0 weekend for the Huskies. Her 39-save shutout marks the most saves in a shutout for a Husky netminder since 2010.

Cassidy MacPherson, PC (Jr., F; Oakville, Ont.) Racked up five points (2g, 3a) in a sweep of Merrimack to finish plus-five on the weekend.

Kate Friesen, PC (Jr., D; Altona, Man.) Had a goal and an assist in Friday's 4-1 victory before adding another helper in Saturday's 5-0 shutout, Providence's first of the season. She finished with a plus-four rating on the weekend.