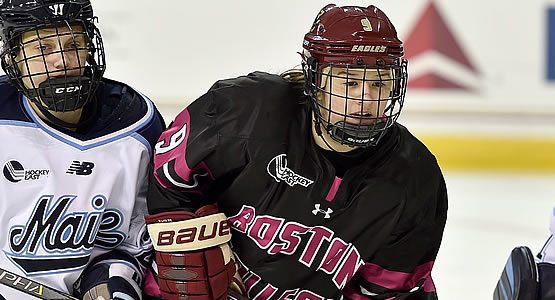 WAKEFIELD, Mass. - Boston College Eagles freshman forward Daryl Watts (Toronto, Ontario) has been named the Women's Hockey Commissioners Association National Player and Rookie of the Month after leading the nation in multiple offensive categories, including goals (10), points (21), points per game (3.00), power-play points (7), and shots per game (6.29). She helped power the Eagles to a 6-0-1 record and the No. 2 ranking in the country to end the month of October.

Watts also ranked second in the NCAA and lead Women's Hockey East with 11 assists, 1.57 assists per game, 1.43 goals per game and four power-play goals. She is currently riding a six-game goal streak dating back to October 6.

The Toronto, Ontario native has scored at least one point in each of the seven games she has played in to date, including six multiple-point outings comprised of one two-point game, two three-point games, and three four-point games. Of Boston College's 29 goals scored in September and October, Watts played a role in 21 of them, including six of seven game-deciding goals. Watts has picked up four game-winning assists, one game-winning goal, and scored the game-tying marker in her team's lone stalemate of 2017-18.

Watts began her NCAA career in impressive fashion, racking up five points in a series against then-No. 2 Minnesota Duluth. She dished out two assists, including setting up the game-winner, on October 5 before recording her first career hat trick and game-winning goal in just her second game on October 6, a 4-1 Eagles win over the Bulldogs. The next weekend, in a 4-2 victory over Quinnipiac, Watts again chipped in with a helper on the decisive tally as part of a four-point (1g, 3a) outing. She tallied the game-tying goal on the power-play against UConn on October 20, securing a point in league play for her team and then rattled off a trio games in which she collected 11 points. At Vermont on October 22, Watts scored her sixth goal of the season and set up three others, netted the puck twice and chipped in with the game-winning assist at Boston University on October 28 with just 3:19 to play, and enjoyed a four-point game (2g, 2a) on October 29 against Maine.