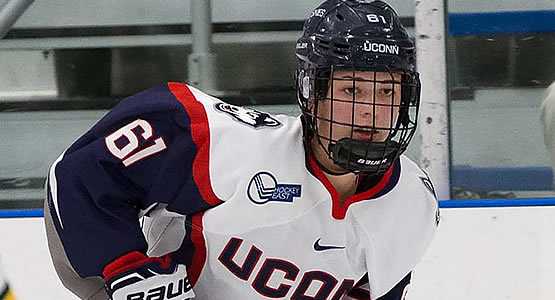 Women's Hockey Player of the Week Briana Colangelo of UConn

AROUND HOCKEY EAST: The Maine Black Bears topped the second ranked opponent of the season, earning a split with #10 Robert Morris at Alfond Arena. Tereza Vanisova (Strakonice, Czech Republic) recorded two goals and two assists in a 5-2 win Saturday while Loryn Porter (North Bay, Ont.) stopped 38 shots in her first collegiate start to earn the win ... UConn swept Union thanks in part to five-point weekends from Briana Colangelo (Whitby, Ont./3g, 2a) and Natalie Snodgrass (Eagan, Minn./2g, 3a). Morgan Fisher (Vernon, Conn.) earned her first win of the year in a 5-0 shutout against the Dutchwomen, making 24 saves ... Providence took a weekend split at Syracuse in a pair of one-goal games. Meaghan Rickard (Coventry, R.I.) found the back of the net twice in an overtime win against the Orange, tying the game 7:24 into the third period before capturing the victory in the extra frame ... New Hampshire skated to a 9-1 triumph over soon-to-be league foe Holy Cross. Four Wildcats earned at last two assists while Julia Fedeski (Algonquin Heights, Ont.) scored twice on the power play and added a helper of her ... Merrimack registered a 0-1-1 weekend against #4 St. Lawrence. Katelyn Rae (Courtice, Ont.) scored the Warriors lone goal on the weekend in a 2-1 setback on Friday before Samantha Ridgewell (Outlook, Sask.) stopped 42 shots in a 0-0 draw in game two ... Vermont fell on the road twice to Quinnipiac, 4-1 and 2-1, after dropping Union, 7-0 in a game that saw Eve-Audrey Picard (Longueuil, Que.) set a new program record with four goals in a single game ... Northeastern dropped a pair at Colgate, 3-0 and 5-2. The 3-0 shutout was the first time the Huskies were shutout since Sept. 30, 2016 against St. Lawrence. 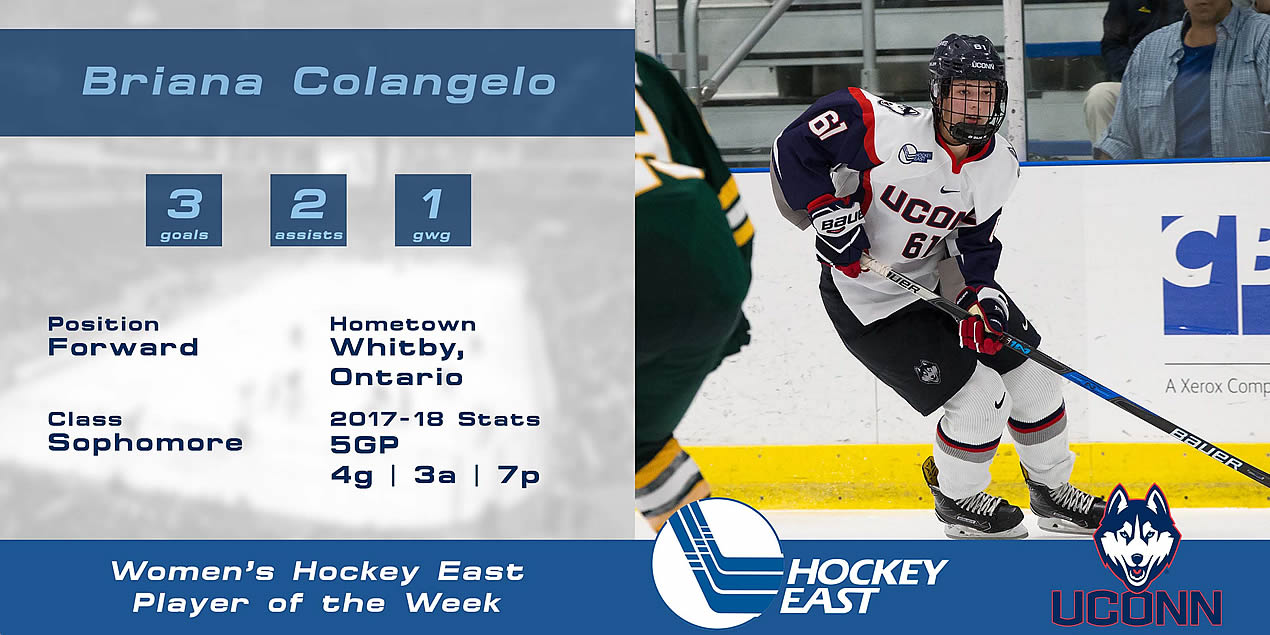 Briana Colangelo (Whitby, Ont.) tied for the UConn lead with five points (3g, 2a) in two wins over Union. She netted Saturday's game-winning goal in a 5-0 win and leads her team with seven points and four goals. 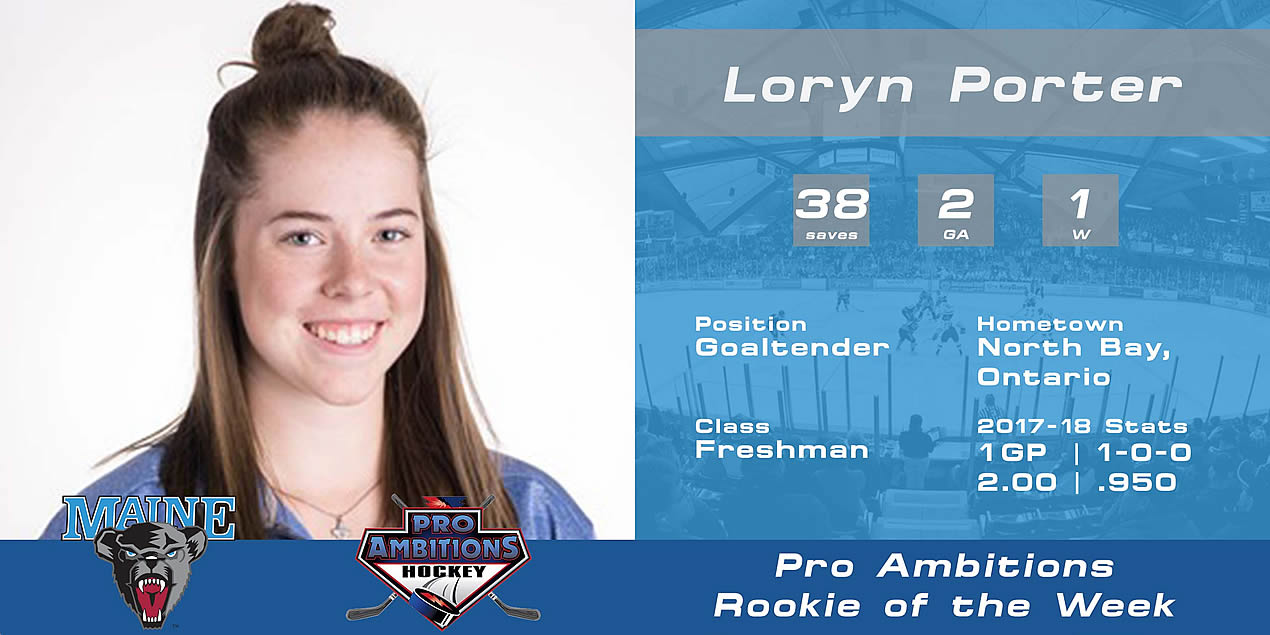 Loryn Porter (North Bay, Ont.) stopped 38 shots against #10 Robert Morris in her first collegiate start to earn a 5-2 victory for the Black Bears. The win was the second of the season against a nationally ranked opponent for Maine. 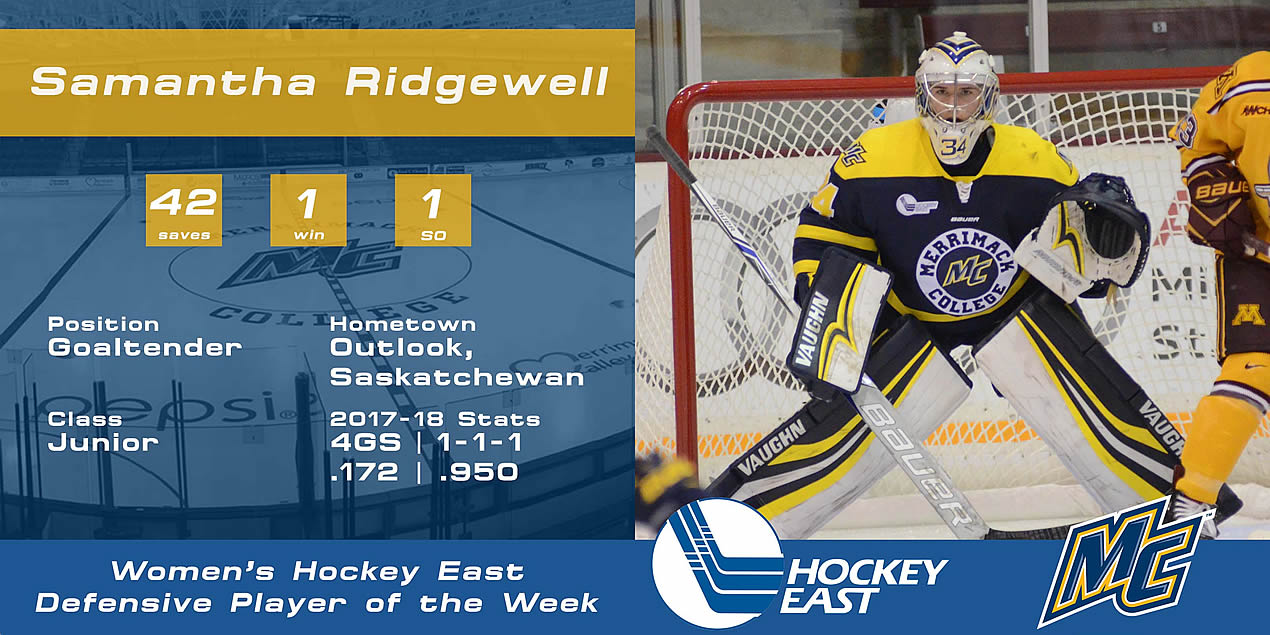 Samantha Ridgewell (Outlook, Sask.) backstopped the Merrimack Warriors to a 0-0 stalemate with #4 St. Lawrence Saturday afternoon, stopping 42 shots from the Saints. Ridgewell has at least 30 saves in three of her four starts this year, boasting a 1.72 goals against average and .950 save percentage.

Morgan Fisher, UConn (So., G; Vernon, Conn.) Earned her first win of the year in a 5-0 shutout against Union, making 24 saves.

Daria Tereshkina, ME (Fr., F; Chelyabinsk, Russia) Registered her first three NCAA points in a split with #10 RMU with a goal and two helpers in Saturday's 5-2 victory.

Julia Scammell, UNH (Fr., D; Truro, N.S.) One of four Wildcats to dish out two assists in the triumph over the Crusaders.

Meaghan Rickard, PC (So., F; Coventry, R.I.) Found the back of the net twice in an overtime win against Syracuse, tying the game 7:24 into the third period before capturing the victory in the extra frame. Also assisted on Friday's lone goal in a 2-1 loss to the Orange.