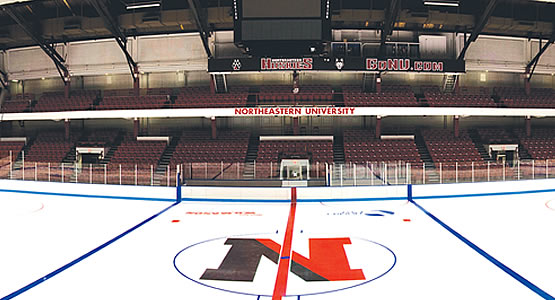 Women's Champion Will Be Crowned at Historic Matthews Arena

WAKEFIELD, Mass. - The Women's Hockey East Association announced today that Northeastern University will serve as host of the 2018 Women's Hockey East Tournament Championship Weekend at Matthews Arena on Saturday, March 3, and Sunday, March 4. The tournament will decide the winner of the Bertagna Trophy in the league's 16th season of on-ice play.

"No hockey facility in the country can match the history and tradition of Matthews Arena," said Hockey East commissioner Joe Bertagna. "I first played hockey in that building in 1964 and have a personal affection for the place. We are appreciative of Northeastern's eagerness to host this event."

"Northeastern is very excited to host Women's Hockey East Championship weekend," said Peter Roby, director of athletics and recreation at Northeastern. "Historic Matthews Arena is one of the iconic sporting venues in Boston, so it's fitting that the 16th Women's Hockey East Championship be decided here. We look forward to putting on a first-class event for both the teams and fans alike."

Information regarding ticket sales and surrounding events will be released at a future date.

The Women's Hockey East semifinals will be held on Saturday, March 3, with games tentatively slated for 1:30 p.m. and 4:30 p.m. Single-admission tickets are valid for both Saturday contests. The winners of each semifinal will advance to the 16th annual Women's Hockey East Championship Game on Sunday, March 4, which is tentatively scheduled for 1 p.m.

Before taking to the ice at Matthews Arena, the four Hockey East semifinalists will navigate through the league's quarterfinal round during the previous weekend (Feb. 23-25). The top-eight teams in the league standings at the conclusion of the regular season will qualify for the 2018 Women's Hockey East Tournament and seeds No. 1-4 will host seeds No. 5-8 in a best-of-three quarterfinal series on campus sites.

ABOUT MATTHEWS ARENA: Matthews Arena is the world's oldest multi-purpose athletic building and the building that houses the world's oldest artificial ice sheet. The original home of the Boston Bruins, the Celtics and the Beanpot, the Arena has served as the center of Northeastern hockey since the program's inception in 1929. Perhaps more widely known as Boston Arena, Matthews Arena is home to Northeastern's men's and women's hockey teams, as well as the men's basketball team. The building is one of the bastions of the country's sporting history.

The old ice house that gave birth to the Boston Bruins, the Boston Olympics and the New England Whalers also was the cradle of high school and college hockey in Greater Boston. The hockey programs at Boston College, Boston University, Harvard, MIT, Tufts and, of course, Northeastern all had their geneses at Matthews.

Tournaments that brighten New England winters such as the Beanpot and ECAC had their starts at the Arena, as did competitive figure skating. In 1994, Nancy Kerrigan graced the ice at Matthews with an entourage that included Paul Wylie and Scott Hamilton, continuing an 85-year tradition of figure skating that numbers Sonja Henie, Dick Button and Tenley Albright.

Today, the stately Victorian lobbies that welcomed the modest and the mighty for more than a century cater to the academic and athletic needs of Northeastern. Convocations and a large portion of the intramural docket are conducted at the Arena, whose walls once echoed with the podium entreaties of presidents Teddy Roosevelt, Franklin Delano Roosevelt and John F. Kennedy. Past Arena dignitaries include Charles Linbergh, Amelia Earhardt, James Michael Curley, Reverend Billy Graham, Admiral Chester Nimitz and General Dwight D. Eisenhower.

Structurally, the Arena has undergone numerous renovations – most recently in 2010 with a multi-million dollar renovation. A new roof, new locker rooms, new seats, new press box and a spectacular video scoreboard led the list of improvements.