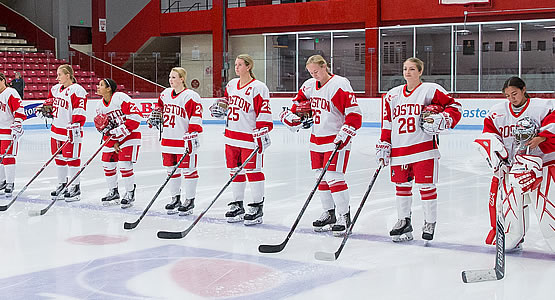 - The Merrimack Warriors and Boston University Terriers kick off the 2017-18 Women's Hockey East season Saturday at Walter Brown Arena in the first of three contests between the two programs this year.

- BU also hosts Concordia in an exhibition contest Friday evening, while Merrimack welcomes the Whitby Wolves for a one-game tune-up.

- Merrimack advanced to the Women's Hockey East playoffs for the first time last year with 7-17-0 league record, while Boston University finished third (12-8-4) before bowing out in the semifinals to Northeastern.

- Boston College kicks off its defense of the Women's Hockey East regular season and tournament titles with an exhibition against Laurentian. The Eagles finished on top of the league standings in 2016-17 with a 17-4-3 record before claiming their third Bertagna Trophy as tournament champions.

- The Eagles will be without defensemen Megan Keller (Farmington Hills, Mich.) and Kali Flanagan (Burlington, Mass.) for the duration of the campaign as both are in residency with USA Hockey's U.S. Women's Olympic Team in preparation for the 2018 Olympics in Pyeongchang, South Korea.

- The Black Bears return to the ice in 2017-18 with an exhibition against the Hockey Training Institute Stars after missing the 2017 Women's Hockey East Tournament.

- In 2016-17, Northeastern wrapped the regular season with a 14-8-2 league record to finish second in the conference. Dave Flint's team fell in the championship game, 2-1, in overtime to Boston College.