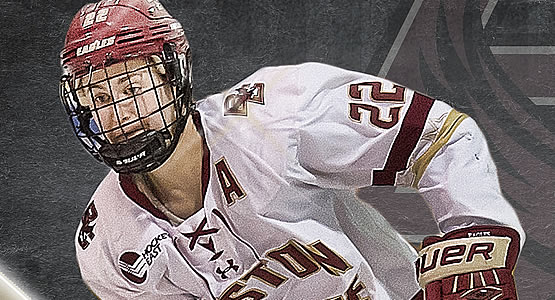 AROUND HOCKEY EAST: No. 1 Boston College defeated Northeastern, 5-1, in the NCAA Quarterfinal round and are set to battle Clarkson at 4:00 p.m. Friday (March 18) in Durham, New Hampshire in the Women's Frozen Four. The Eagles have competed in the Frozen Four round five times, but have never reached the championship game. In last season's semifinal, BC fell to Harvard in a 2-1 setback, which also marks the last time the Eagles lost, carrying a 39-0-0 record this year. The Eagles have the second-most single-season wins in NCAA history. If victorious on Friday, they will take on the winner of the Wisconsin vs. Minnesota game Sunday (March 20) at 2:00 p.m. for the NCAA title ... Four Eagles contributed at least two points in Saturday's quarterfinal win against Northeastern: Alex Carpenter (North Reading, Mass.) (2g, 1a), Megan Keller (Farmington Hills, Mich.) (2a), Haley Skarupa (Rockville, Md.) (1g, 3a) and Tori Sullivan (West Bloomfield, Mich.) (2g). Sullivan recorded her second multi-goal game of the season and sixth of her career and Skarupa extended her point streak to 15 games. She has scored 30 points (13g, 17a) in that span. Carpenter is the only Boston College women's player to advance to the Women's Frozen Four in all four years of collegiate play (2012, 2013, 2015, and 2016). The 2015 Patty Kazmaier winner and 2016 Top-3 finalist scored her 85th point of the season last weekend, putting her at the top of the NCAA leader board. Netminder Katie Burt (Lynn, Mass.) denied 20 Northeastern shots and earned her 34th win of the season ... Northeastern University's season came to a close in the 5-1 setback to the No. 1 Boston College Eagles, but the Huskies made program history by advancing to the NCAA tournament for the first time and posting a 28-9-1 record overall. Five of the nine losses came at the hand of BC, the best offensive squad in the nation. Warrior Hockey East Player of the Year and Top-3 Patty Kazmaier award finalist Kendall Coyne (Palos Heights, Ill.) netted her 50th goal of the season, the lone goal of the game for the Huskies. The last player to reach the half-century goal marker was Harvard's Nicole Corriero in the 2004-2005 season (59 goals). Coyne is one of two Huskies to reach the 50-goal milestone. She joins Vicky Sunohara who notched 51 goals in the 1988-89 season. 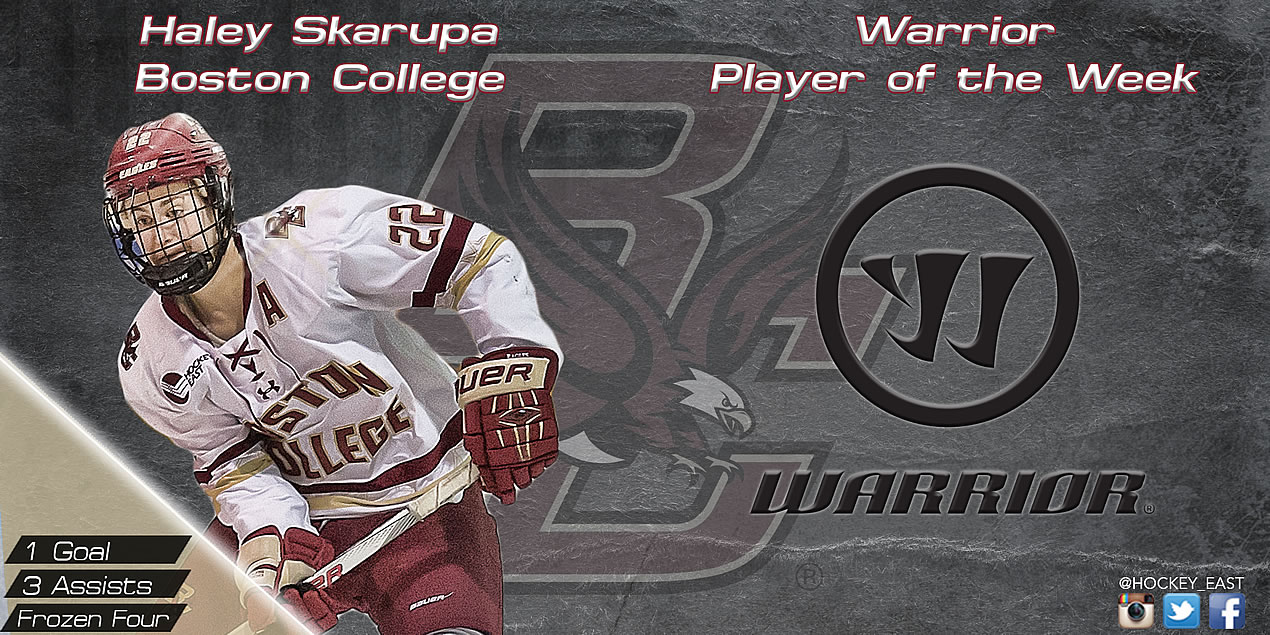 Haley Skarupa, BC (Sr., F; Rockville, Md.) extended her point streak to 15 games with a goal and three assists in the NCAA Quarterfinals against Northeastern. Her fourpoint outing catapulted the Eagles past the Huskies and into the Frozen Four for the second consecutive year. It was her second straight four-point game. 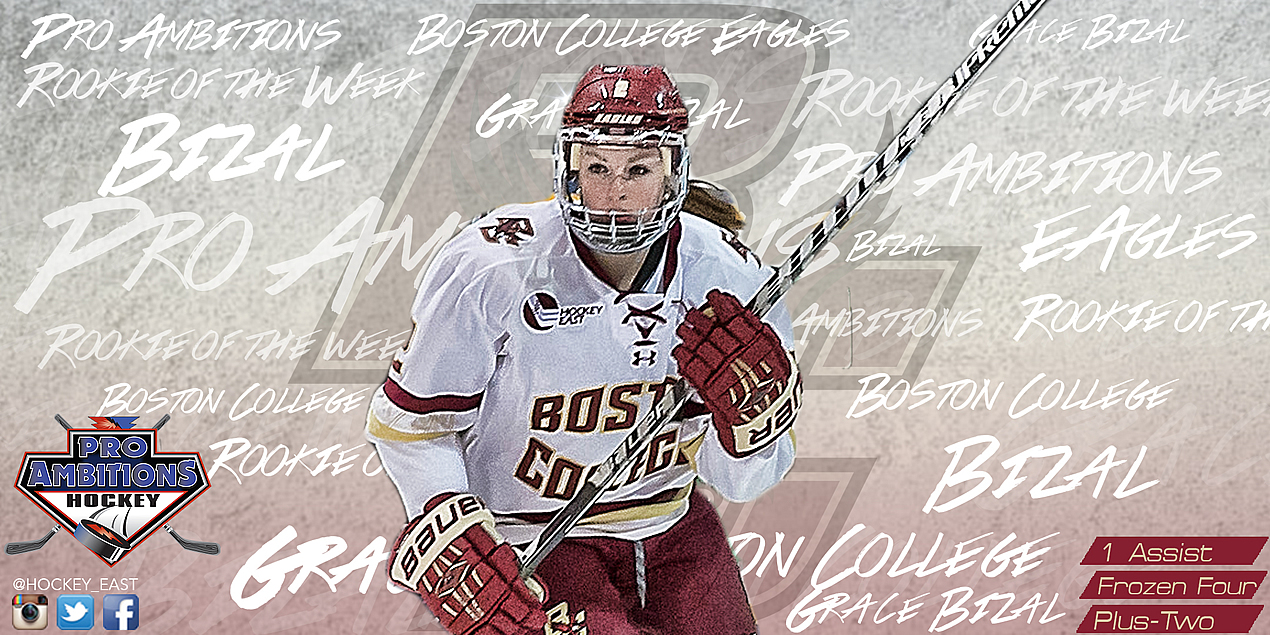 Grace Bizal (Minnetonka, Minn.) helped the No. 1 Boston College Eagles into the Women's Frozen Four with an assist on Haley Skarupa's second period goal in the NCAA Quarterfinals over Northeastern. 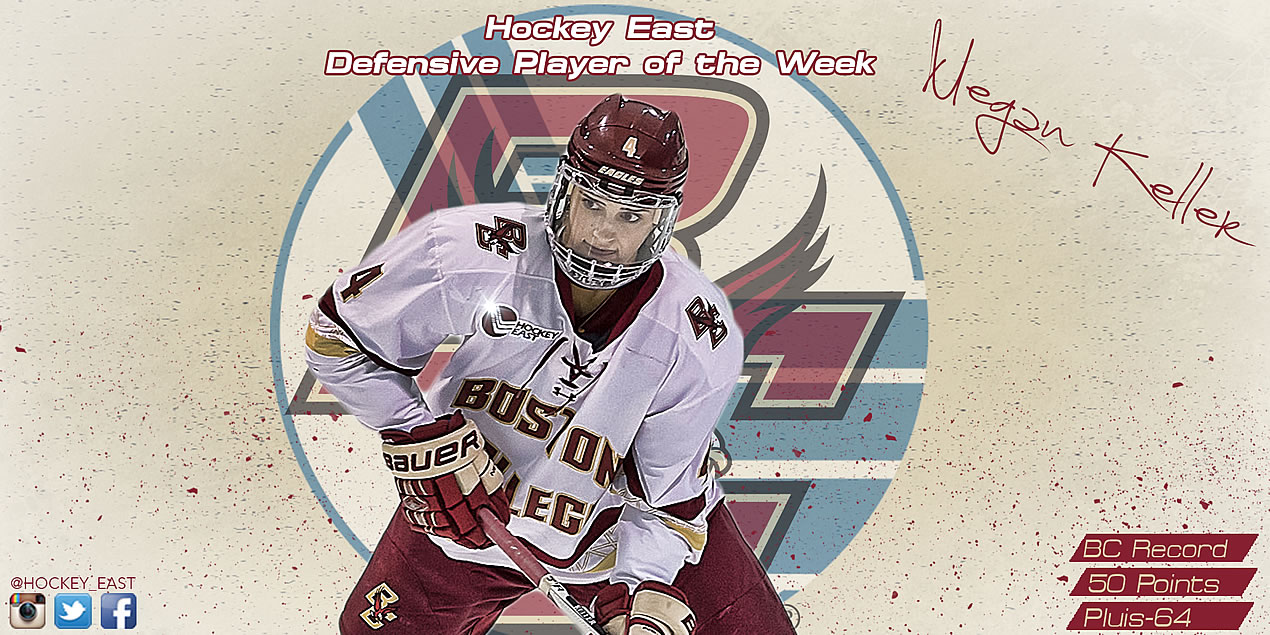 Megan Keller, BC (So., D; Farmington Hills, Mich.) picked up two assists to push the Eagles past Northeastern and into the Frozen Four. She became the first defenseman in BC history to score 50 points in a season in that contest. The blueliner also helped limit NU to just 23 shots and only one goal to finish plus-three and now leads the nation in plus/minus (+64).

Alex Carpenter (Sr., F; North Reading, Mass.) Reached the top of the NCAA leader board scoring her 85th point of the season; sparked BC scoring just 50 seconds into the NCAA quarterfinal game

Kendall Coyne (Palos Heights, Ill.) Notched her 50th goal of the season, the second player to do so in NU history