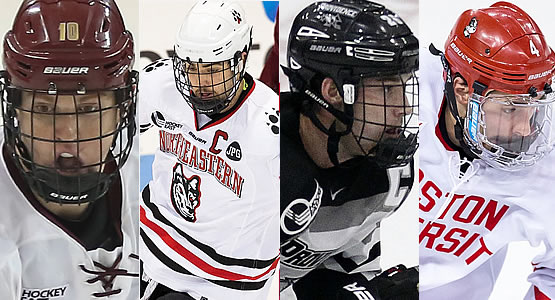 WAKEFIELD, Mass. - The Hockey East Association has announced the four pairings for the best-of-three quarterfinal round of the 2018 Hockey East Tournament. Playoff games begin Friday, March 4. The top five seeds, No. 1 Boston College, No. 2 Northeastern, No. 3 Providence, No. 4 Boston University will play hosts to the lowest remaining seeds for the right to advance to championship weekend at TD Garden March 16 & 17. A full schedule can be found in the attached release.

No. 1 Boston College (18-13-4, 18-6-0 HEA) draws No. 10 Merrimack (12-19-4, 7-15-2 HEA) to Conte Forum for their seventh all-time series in the Hockey East Tournament and first since the 2011 championship game. The Eagles hold a 10-1-0 advantage all time over the Warriors in the postseason, including a 8-1-0 mark in the quarterfinals. Merrimack advanced over UMass Lowell with a two-game sweep, the program's first two postseason wins over the River Hawks. During the regular season, Boston College won both legs of a home-and-home series with Merrimack Nov. 3-4.

No. 2 Northeastern (21-8-5, 15-6-3 HEA) will play host to No. 8 Massachusetts (17-18-2, 9-13-2 HEA) in just the second ever playoff series between the two schools. The Huskies and Minutemen previously met in the 2009 quarterfinals, a 2-1 series win for Northeastern. The programs split a home-and-home series during the regular season, with the host shutting out the visitor in each outing. UMass moved into the quarterfinals for the first time since 2012 with a series win over Vermont at the Mullins Center. The Minutemen look for their first quarterfinal win since 2009 and have not appeared in the semifinals since 2007.

No. 3 Providence (20-10-4, 13-7-4 HEA) welcomes No. 6 Maine (18-14-4, 10-11-3 HEA) to Schneider Arena for the ninth all-time postseason series between the Friars and Black Bears. The teams last met in the 2014 quarterfinals. Providence holds a 7-5-0 edge in the Hockey East Tournament and won each of the two games during the regular season. Maine advanced into the quarterfinals for the first time since 2014 with a two-game sweep of New Hampshire in Alfond Arena, the first series win for the Black Bears in Orono since 2012.

No. 4 Boston University (17-3-4, 12-8-4 HEA) will host No. 5 UConn (15-17-2, 11-12-1 HEA) in the quarterfinals, March 9-11. This marks the highest finish in UConn's four-year stint with Hockey East and the first time Huskies' have earned a bye through the opening round. UConn has dropped quarterfinal series in each of its first three playoff appearances. Boston University and UConn split a three-game regular-season series, 1-1-1. The teams skated to a 2-2 stalemate on October 20 in their lone game at Agganis Arena and scored a combined 22 goals across the three games. The Terries hold the record for most Hockey East Tournament wins with a 70-39-1 mark.