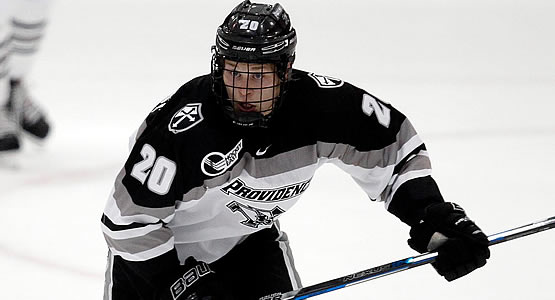 AROUND HOCKEY EAST: The 2017-18 Hockey East season ended in the NCAA Regional finals last weekend, as both Providence and Boston University fell just one win short of a berth in the 2018 Frozen Four. #7 Providence kicked off the regionals weekend on Friday in Bridgeport, Connecticut against #9 Clarkson. Hayden Hawkey (Parker, Colo.) kicked out all 18 shots he faced from the Golden Knights and Kasper Björkqvist (Espoo, Finland) scored at 4:02 of the first period to secure a 1-0 win for the Friars. The next night, Björkqvist scored again for the Friars, but they fell short, 2-1, to Notre Dame with just 27 seconds left in the game. Providence ended the year with a 24-12-4, marking the fifth-consecutive season of 20-plus wins. It is the third-longest active streak in the nation behind Denver (17) and Minnesota State (6). Each of Providence's five games playoff games were decided by one goal. The Friars went 11-5-0 overall this season in onegoal games ... #13 Boston University earned a 3-1 win over long-time rival #3 Cornell in the East Regional semifinal. Each of the Terriers' three goals were scored by freshman, including Shane Bowers (Halifax, N.S.), David Farrance (Victor, N.Y.), and Logan Cockerill (Brighton, Mich.). The next day, BU faced off with Michigan for the ninth time in program history in the NCAA Tournament, falling to the Wolverines, 6-3. Jordan Greenway (Canton, N.Y.) had a goal and an assist in the contest. The Terriers ended with a 22-14-4 record. Senior Drew Melanson (Paramus, N.J.) had four goals in his last six games in a BU sweater and recorded at least one point in each of his last four outings and in five of the Terriers' six postseason games ... Northeastern ended its year in the East Regional semifinals, falling to Michigan, 3-2 on Saturday to finish with a 23-10-5 record. Hobey Baker finalist Dylan Sikura (Aurora, Ont.) scored his career-best 22nd goal on the year in the setback, his NCAA-leading 14th power-play strike. Rookie netminder Cayden Primeau (Voorhees, N.J.) wrapped his all-star freshman campaign with 29 saves ... This marks the first time since 2011 that Hockey East has not been represented in the Frozen Four. In that time, the league has sent seven teams to the Frozen Four, including two in 2015 when Boston University and Providence played for the national title at the TD Garden in Boston. Providence captured its first NCAA championship in that game. 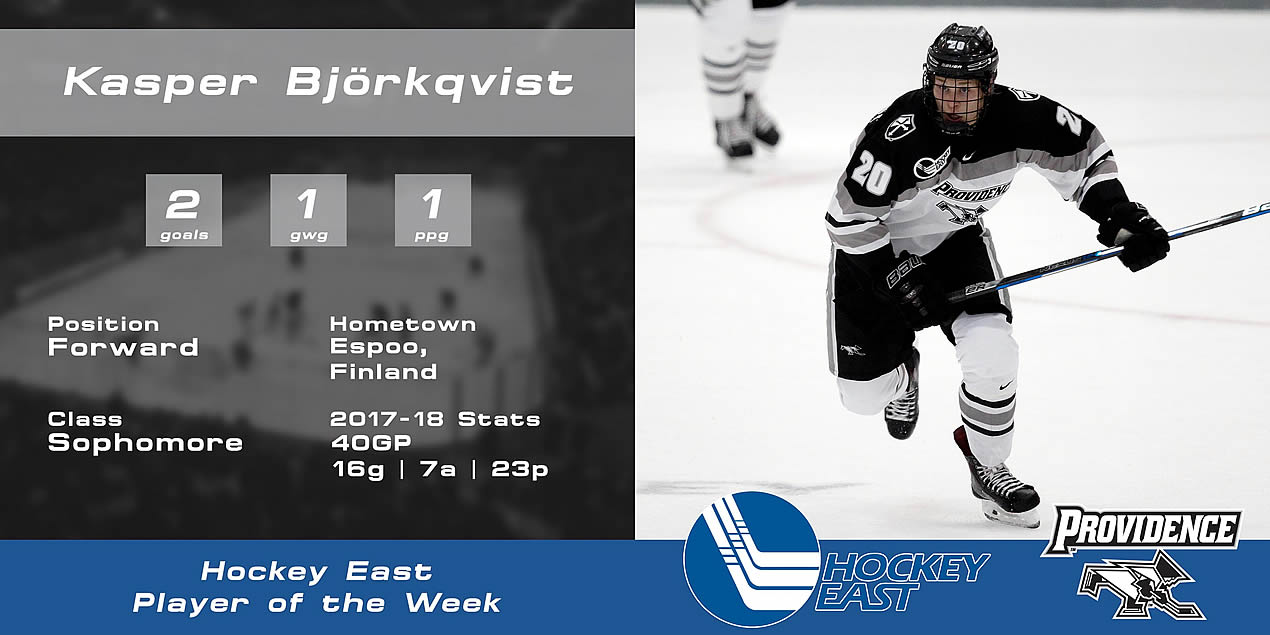 Kasper Björkqvist (Espoo, Finland) scored both of Providence's goals in the NCAA Regionals, including Friday's game-winning strike just 4:02 into the game. The sophomore from Espoo, Finland ended the year with 16 goals and 7 assists for 23 points, including goals in three of his final four outings. 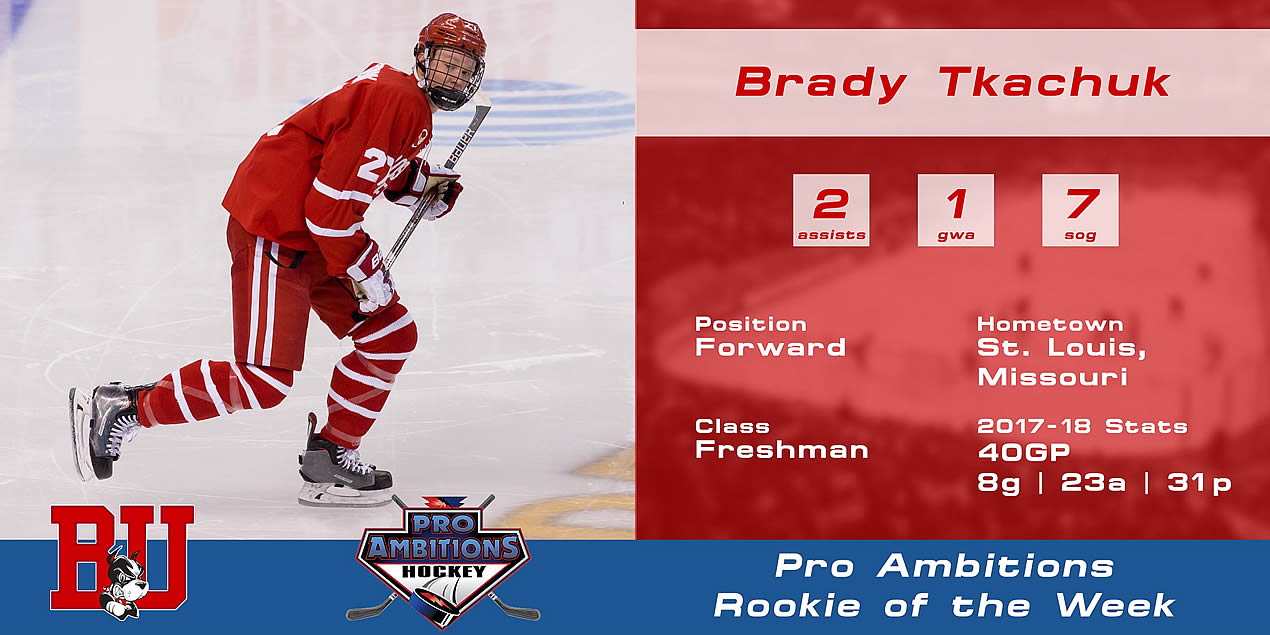 Brady Tkachuk (St. Louis, Mo.) helped power Boston University into the Northeast Regional final, setting up the game-winning goal in the semifinal over Cornell. The next day, he assisted on another Terriers tally in a 6-3 setback to Michigan. He wrapped the year with eight goals and 23 helpers in 40 games played. 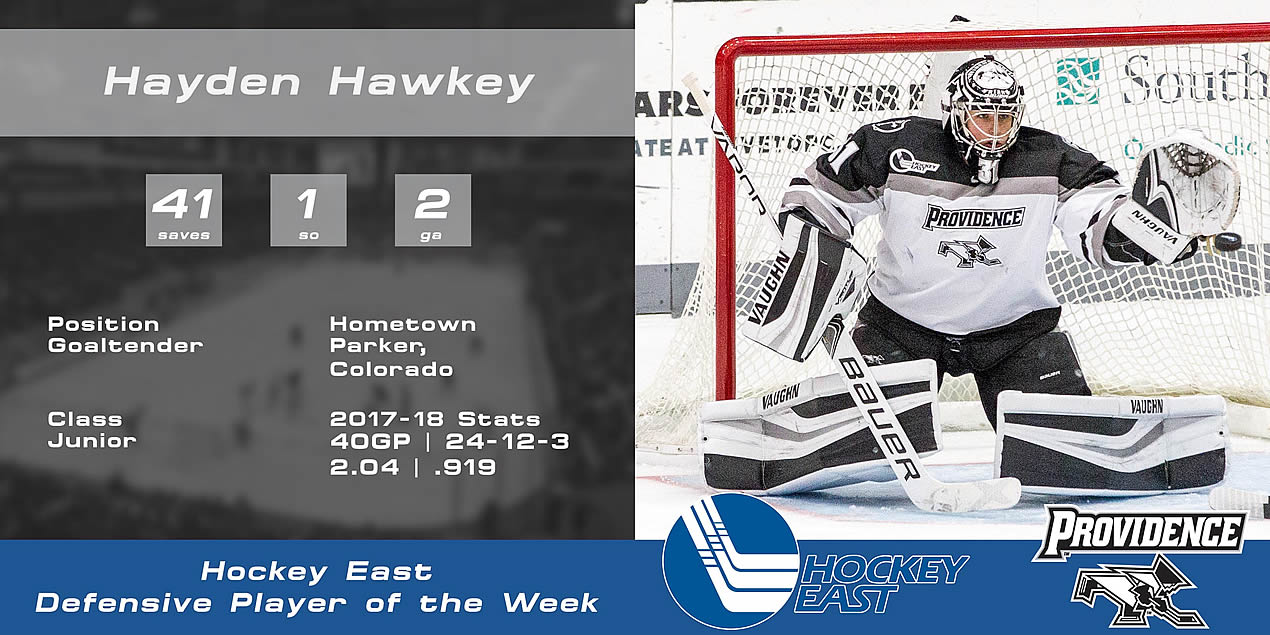 Hayden Hawkey (Parker, Colo.) backstopped the Friars into the NCAA East Regional final with an 18-save shutout of Clarkson. The junior netminder held his ground in the 1-0 victory and allowed just two goals in two games. In total, he stopped 41 saves across the two games.

Jordan Greenway, BU (Jr., F; Canton, N.Y.) Had a goal and an assist in the Northeast Regional semifinal against Michigan, a 6-3 setback for the Terriers. He won 21 faceoffs in the two games, the most of any player in the league last weekend. He signed a three-year contract with the Minnesota Wild on Monday morning.

Drew Melanson, BU (Sr., F; Paramus, N.J.) Netted a goal in the third period to tie the game, 3-3, with Michigan on Sunday afternoon. He also added an assist on Saturday's game-winning strike against Cornell.

Nolan Stevens, NU (Sr., F; Sea Isle City, N.J.) Assisted on one of the Huskies' two goals in a 3-2 setback to Michigan in the Northeast Regional semifinal. He then signed an entry-level contract with the St. Louis Blues.

Eric Williams, NU (Jr., D; Newmarket, Ont.) Found the back of the net in the Northeast Regional semifinal against Michigan, his fifth goal of the year. He fired three shots on net and finished with an even plus-minus rating.