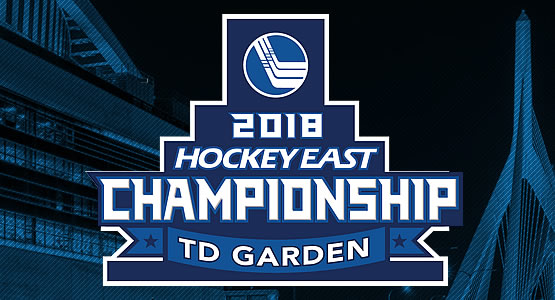 The top four seeds have advanced to the Hockey East semifinals at TD Garden in Boston. No. 1 Boston College will face #4 Boston University at 5 p.m. while No. 2 Northeastern and No. 3 Providence will meet at 8 p.m.

- No. 1 Boston College (20-13-4, 18-6-0 HEA) advances to the semifinals for the third straight year after claiming its 16th Hockey East regular season title.

- It is both the Eagles' and No. 4 Boston University's (19-13-4, 12-8-4 HEA) 24th appearance in the semifinals, the most of any program in Hockey East Tournament play. Boston College has won the Lamoriello Trophy 11 times in its history, while the Terriers have claimed eight total Hockey East Tournament titles.

- The matchup features the two winningest teams in Hockey East Tournament history. The Terriers claim a record of 72-39-1 while the Eagles carry a 70-31-2 all-time mark.

- It marks just the sixth time the two programs have met in the semifinals. Boston University holds a 3-2 mark over their rivals in those previous five games, although the Eagles emerged victorious, 4-3, in a last year's semifinal between the two.

- Fitzgerald was named the '47 Brand Best Defensive Defenseman in league play on Wednesday, as voted on by the league's 11 head coaches.

- The Huskies are 2-7 in eight all-time semifinal appearances. Providence returns to the TD Garden for the fifth time in the last seven seasons looking to advance to the championship for the first time since 2001.

- Rounding out the first team was a pair of Providence players in Jacob Bryson (London, Ont.) and Erik Foley (Mansfield, Mass.). The six players will do battle at 8 p.m. in the second semifinal on Friday at the TD Garden.

- Players from Providence and Northeastern also racked up a bevy of awards Wednesday. The Friars' Bryson was honored with the Len Ceglarski Sportsmanship Award, Brian Pinho (North Reading, Mass.) was tabbed as Gladiator Custom Mouthguards Best Defensive Forward and Northeastern's Gaudette was named the Hockey East Three Stars Award winner and the Hockey East Scoring Champion, while Primeau was honored as the Stop It Goaltending Goaltender of the Year.