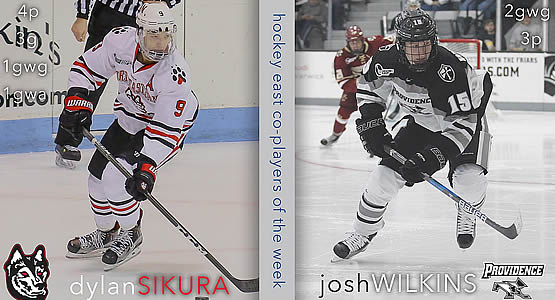 AROUND HOCKEY EAST: No. 1 Boston College (20-13-4, 18-6-0 HEA) advances to the semifinals for the third straight year after claiming its 16th Hockey East regular season title while No. 4 Boston University (19-13-4, 12-8-4 HEA) skates into the TD Garden for the fourth consecutive season, winning its 12th straight quarterfinal game to do so. It is the second year in a row that the Eagles and Terriers will meet in the Hockey East semifinals. In 2017, the Eagles topped the Terriers, 3-2, to advance to their league-record 17th appearance in the championship contest. Both programs are competing in the Hockey East semifinals for the 24th time, the most of any school in league tournament history. All-time in postseason play, Boston University owns a 9-4 record over Boston College in 10 previous series, including a 3-2 mark in the semifinals. Between the Eagles (11) and Terriers (9), the two programs have claimed 20 of the previous 33 Hockey East Tournament titles. During the regular season, the teams split a pair of Hockey East games, 1-1-0 ... No. 2 Northeastern (21-8-5, 15-6-3 HEA) will skate against No. 3 Providence (22-10-4, 13-7-4 HEA) for just the sixth time in the Hockey East Tournament in three previous series. The Huskies and Friars have not played against each other in the postseason since a 1994 quarterfinal series. This marks the third time in three seasons that Northeastern has appeared in the Hockey East semifinals and the Huskies are 2-7 in eight all-time semifinal appearances. Providence returns to the TD Garden for the fifth time in the last seven seasons looking to advance to the championship for the first time since 2001. In the 2017-18 regular season, Providence staked a 1-0-1 mark over Northeastern. 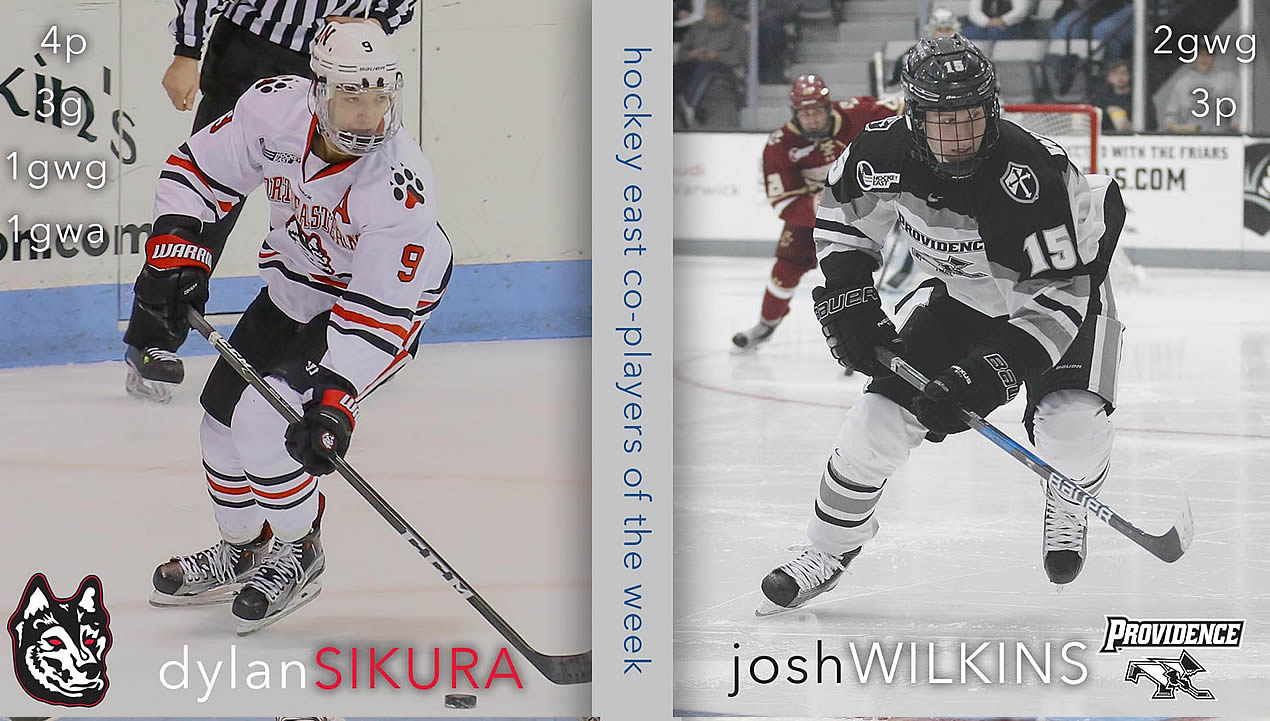 Dylan Sikura (Aurora, Ont.) had four points, including three goals, and factored in on both game-winning tallies for the Huskies in a sweep of UMass.

Josh Wilkins (Raleigh, N.C.) scored both game-winning goals for Providence in a sweep of Maine, lifting the Friars into the Hockey East semifinals. Each win was a one-goal victory for Providence. He tallied three points total on the weekend. 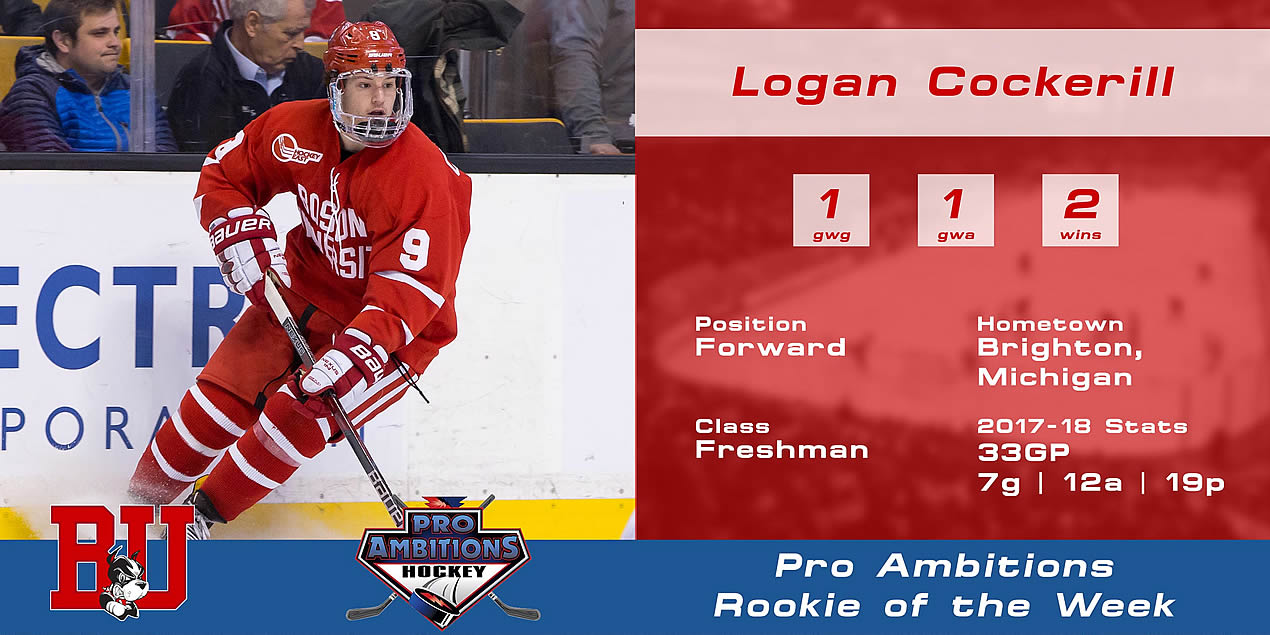 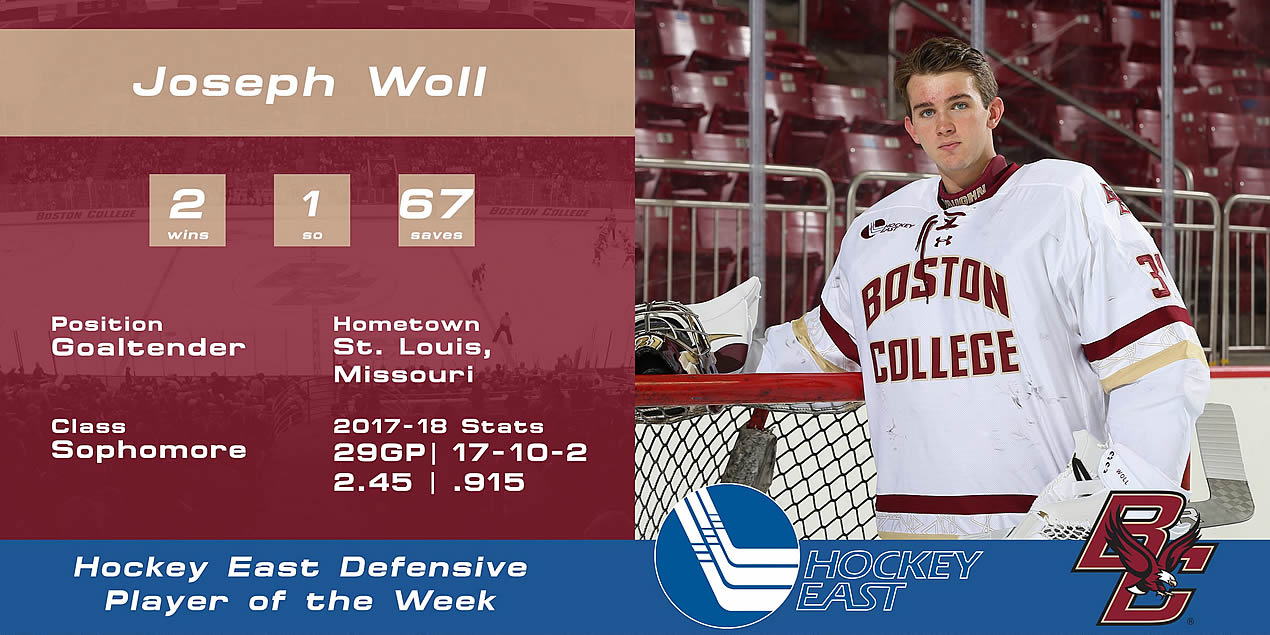 Joseph Woll (St. Louis, Mo.) backboned his Eagles into the Hockey East semifinals with 67 saves in a two-game sweep of Merrimack. On Friday, he stopped all 37 shots he saw in a 1-0 win before kicking out 30 more saves in Saturday's overtime victory.

Christopher Grando, BC (Fr., F; Islip, N.Y.) Netted the shorthanded game-winning goal for the Eagles in overtime of Game 2 against Merrimack, sending the top-seeded Eagles back into the semifinals for the third straight year.

Jordan Greenway, BU (Jr., F; Canton, N.Y.) Scored two goals in Friday's 5-4 overtime win over UConn before dishing out an assist in Saturday's victory to bush BU into the semifinals.

Chad Krys, BU (So., D; Ridgefield, Conn.) Notched a goal and had a team-best plus-three in the two-game sweep of UConn in the Hockey East Tournament quarterfinals.

Nolan Vesey, ME (Sr., F; North Reading, Mass.) Had one goal and three assists in his final weekend as a Black Bear, dishing out all three helpers Friday night.

Veli-Matti Tiuraniemi, ME (Fr., D; Piertaasi, Finland) Tallied one goal and two assists to lead all freshman defenseman in scoring last weekend, finding the back of the net on the powerplay Friday night.

Adam Gaudette, NU (Jr., F; Braintree, Mass.) Factored in on each of the Huskies' game-winning strikes against UMass, dishing out a helper on Friday and striking for the winning marker Saturday. He's currently riding a ninegame point streak (11g, 9a) and has had a hand in each of the last three game-winning goals for NU.