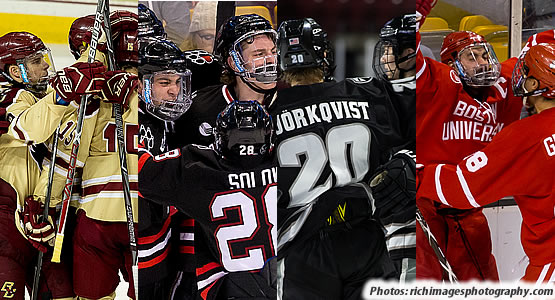 WAKEFIELD, Mass. - The Hockey East Association has announced the pairings and start times for the semifinal round of 2018 Hockey East Tournament at TD Garden in Boston. Top-seeded Boston College renews its rivalry with the No. 4 Boston University Terriers at 5 p.m. on Friday, March 16 while No. 2 Northeastern and three-seeded Providence clash at 8 p.m. Both semifinals and the championship game will be shown live on NESNplus and ESPN3. It marks just the second time since 2013 that the top four seeds have all advanced to the final weekend of the Hockey East Tournament (2017).

No. 1 Boston College (20-13-4, 18-6-0 HEA) advances to the semifinals for the third straight year after claiming its 16th Hockey East regular season title. No. 4 Boston University (19-13-4, 12-8-4 HEA) advances to the TD Garden for the fourth consecutive season, winning its 12th straight quarterfinal game to do so. It is the second year in a row that the Eagles and Terriers will meet in the Hockey East semifinals. In 2017, the Eagles topped the Terriers, 3-2, to advance to their league-record 17th appearance in the championship contest. Both programs are skating in the Hockey East semifinals for the 24th time, the most of any school in league tournament history. All-time in postseason play, Boston University owns a 9-4 record over Boston College in 10 previous series, including a 3-2 mark in the semifinals. Between the Eagles (11) and Terriers (9), the two programs have claimed 20 of the previous 33 Hockey East Tournament titles. During the regular season, the teams split a pair of Hockey East games, 1-1-0.

No. 2 Northeastern (21-8-5, 15-6-3 HEA) will skate against No. 3 Providence (22-10-4, 13-7-4 HEA) for just the sixth time in the Hockey East Tournament in three previous series. The Huskies and Friars have not played against each other in the postseason since a 1994 quarterfinal series. This marks the third time in three seasons that Northeastern has appeared in the Hockey East semifinals and the Huskies are 2-7 in eight all-time semifinal appearances. Providence returns to the TD Garden for the fifth time in the last seven seasons looking to advance to the championship for the first time since 2001. In the 2017-18 regular season, Providence staked a 1-0-1 mark over Northeastern.

Semifinal tickets include admission to both semifinal games, and prices start at just $17 in the balcony, $37 in the loge, and $41 for club seats and the first row of the loge. Student tickets, located in the upper balcony, will be made available for $10 when showing a valid student ID, either on campus or at the TD Garden Box Office. Groups of 15 or more are also eligible for a $5 discount on $17 balcony seats and a $7 discount on select loge seats. All discounted tickets must be purchased at the TD Garden Box Office. To take advantage of group discounted tickets, contact the TD Garden group sales department at 617-624- 1805 or groupsales@tdgarden.com Tickets will become available on the campuses beginning on Monday, March 12 when the four remaining schools are identified.