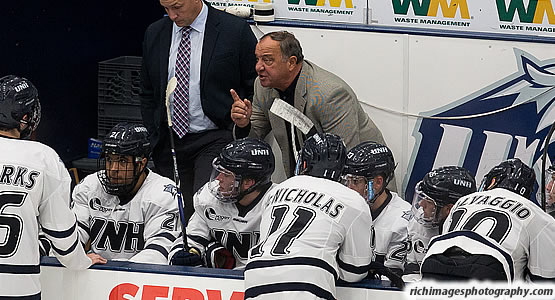 Wildcats head coach Dick Umile is just four wins shy of reaching 600 in his career behind the New Hampshire bench.

- Wildcats head coach Dick Umile is just four wins shy of reaching 600 in his career behind the New Hampshire bench.

- UNH and Vermont are currently tied for eighth in the Army ROTC Hockey East standings, with 14 points apiece.

- The Catamounts head into the weekend riding a five-game unbeaten streak (4-0-1) after capturing three league points against then-#8 Providence last weekend. Goaltender Stefanos Lekkas (Elburn, Ill.) stood tall in net, stopping 74 of 79 shots he faced, including a career-high 44 saves on Friday night, to earn this week's Defensive Player of the Week honors.

- The Wildcats tied then-#9 Northeastern en route to earning three league points after a win from UMass last weekend. Rookie defenseman Max Gildon (Plano, Texas/1g, 2a) had a hand in three of UNH's four goals last weekend and shares the conference lead in defense scoring with 22 points (8g, 14a) on the season.

- Providence (17-9-4, 10-6-4 HEA) and Maine (15-10-4, 9-7-3 HEA) finish off a two-game regular season series after first clashing at the Friendship Four in Belfast, Northern Ireland over Thanksgiving. The Friars blanked the Black Bears, 3-0, in the contest. The teams have only a three-point differential in the Army ROTC Hockey East standings, sitting third and fifth, respectively, but if Providence picks up a win the Friars will be tied with the current first place Boston College with 26 points. In all, the top seven teams are separated but just seven points in the conference table.

- Maine's six-game unbeaten streak was snapped after dropping a 3-2 overtime decision to Merrimack on Saturday. The Black Bears currently rank fifth in the Army ROTC Hockey East standings with 21 points, the team's highest placement this season.

- Rookie netminder Jeremy Swayman (Anchorage, Alaska) went 4-2-2 in the month of January and was tabbed Pro Ambitions Rookie of the Month last week.

- Northeastern (16-7-5, 11-5-3 HEA) and UConn (13-16-2, 9-11-1 HEA) will conclude a regular-season two-game series at Matthews Arena on Friday night. The first Huskies vs. Huskies showdown took place in on Nov. 28, when UConn captured a 4-1 win at home. UConn enters its final road of the year riding a five-game win streak with the help of Corey Ronan (Franklin, Mass.), who has three goals and one assist in his last five outings.

- Outside of league play, Northeastern blanked Boston College, 3-0, in the opening round of the Beanpot on Monday night to advance to the title game against Boston University next week. The Huskies three goals were scored by the team's first line and leading scorers Adam Gaudette (Braintree, Mass./20g, 22a), Dylan Sikura (Aurora, Ont./14g, 24a), and Nolan Stevens (Sea Isle City, N.J./18g, 11a). A win for Northeastern would give the Huskies their first Beanpot championship since 1988.

- Boston University (15-11-2, 10-7-2 HEA) is currently on a season-best eight-game unbeaten streak (7-0-1), including a double-overtime win against Harvard in the first round of the Beanpot on Monday night. Freshman Ty Amonte (Norwell, Mass.) scored in the fifth period for BU, propelling the team into the title game for the fourth consecutive year.

- The Terriers downed UMass (12-16-1, 6-12-1 HEA) in a tight 3-2 matchup on Feb. 2. Shane Bowers (Halifax, N.S./13g, 9a), who leads all Terrier freshman in scoring and is tied for first in the league in freshman scoring with 24 points on the season, netted the game-winning goal for BU. It was Bower's fourth decisive tally of the season, tying him for most winners in the league.

- Boston College fell Northeastern, 3-0, in the first round of the Beanpot on Monday night and will play in the consolation game against Harvard to conclude the annual tournament. The Eagles skated against the Crimson earlier this season on Nov. 24, tying Harvard, 4-4. BC's leading scorer Julius Mattila (Tampere, Finland/8g,12a) notched a season-best four points against the Crimson with two goals and two assists.

- UMass Lowell and Massachusetts cap off a two-game series at the Mullins center on Friday night. The Minutemen fell to the River Hawks on the road on Jan. 6, 8-3. Lowell's Ryan Lohin (Chadds Ford, Pa./8g, 8a) notched a career-high four points in the outing with two goals and two assists. Lohin and teammate Tommy Panico (Wall, N.J./4g,12a) lead UML in scoring with 16 points each and are tied for ninth in league scoring. Lowell leads all teams in conference play, netting 3.17 goals per game.

- Massachusetts is coming off a mid-week win against Merrimack on Tuesday night. A multi-goal game from Amherst native John Leonard helped the Minutemen to the 5-2 win. Leonard has notched five goals over his last six games and is tied with classmate Oliver Chau (Oakville, Ont.) for the most goals on the UMass roster with eight.