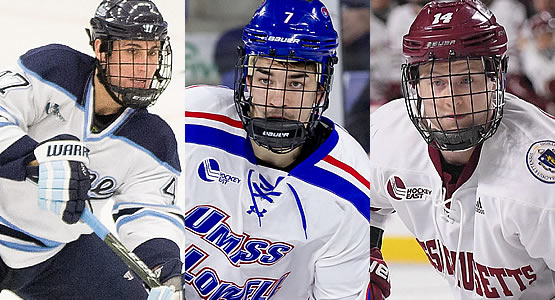 WAKEFIELD, Mass. - The Hockey East Association has announced the three pairings for the best-of-three opening round of the 2018 Hockey East Tournament. Playoff games begin Thursday, March 1. The top five seeds, No. 1 Boston College, No. 2 Northeastern, No. 3 Providence, No. 4 Boston University and No. 5 UConn, will enjoy a bye into the quarterfinals, while seeds six through eight will host seeds nine through 11 next weekend, March 2-4. A full schedule can be found below.

No. 7 UMass Lowell (17-17-0, 11-13-0 HEA) welcomes No. 10 Merrimack (10-19-4, 7-15-2 HEA) to the Tsongas Center Friday, March 2 at 7:15 p.m. to begin their best-of-three series. The River Hawks and Warriors split their twogame season series in the final weekend of the regular season. This is the first time UMass Lowell will participate in the opening round and just the second time meeting Merrimack in the Hockey East Tournament. The two programs clashed in the 1994 quarterfinals, a two-game sweep for UMass Lowell. The River Hawks have reached the Hockey East Championship game in each of the last five years

No. 8 Massachusetts (15-17-2, 9-13-2 HEA) will entertain No. 9 Vermont (9-18-7, 6-12-6 HEA) in just their second-ever postseason tilt beginning Thursday, March 1 at 7 p.m. UMass hosts a Hockey East Tournament game for the first time since 2007. The Minutemen and Catamounts also met in the 2014 opening round, a single-elimination round that saw Vermont move into the quarterfinals. During the regular season, Massachusetts took a 1-0-1 mark on the road against Vermont, one of just three season-series victories for the Minutemen in league play.

No. 4 Boston University (17-3-4, 12-8-4 HEA) will host No. 5 UConn (15-17-2, 11-12-1 HEA) in the quarterfinals, March 9-11. This marks the highest finish in UConn's four-year stint with Hockey East and the first time Huskies' have earned a bye through the opening round. UConn has dropped quarterfinal series in each of its first three playoff appearances. Boston University and UConn split a three-game regular-season series, 1-1-1. The teams skated to a 2-2 stalemate on October 20 in their lone game at Agganis Arena and scored a combined 22 goals across the three games. The Terries hold the record for most Hockey East Tournament wins with a 70-39-1 mark.