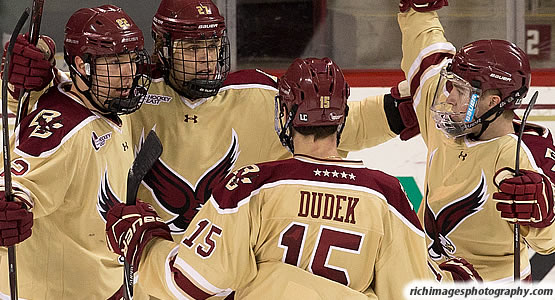 - Boston College (16-13-3, 16-6-0 HEA) and Maine (16-12-4, 10-9-3 HEA) close out a three-game regular season series with a pair at Kelley Rink Friday and Saturday night. The Eagles have a chance to secure the 2018 Hockey East regular season title with at least two points in the two outings, which would put them clear of both Northeastern and Providence in the Army ROTC Hockey East Standings.

- The teams met for the first time last weekend in Maine, where Boston College came away with a 5-0 win over the Black Bears. It marked the first shutout for the Eagles at Alfond Arena since 2009. Joseph Woll (St. Louis, Mo.) made 33 saves in the outing.

- Freshman forward Logan Hutsko (Tampa, Fla.) rides a four-game point streak heading into the weekend series with Maine and has accounted for nine points (6g, 3a) over that time span. Hutsko leads the team in scoring with 26 points on 11 goals and 16 assists.

- The two games against the Eagles this weekend are crucial for the Black Bears who are looking to clinch a bye in the first round of the playoffs. Maine is currently tied with UConn for fifth in the Army ROTC Hockey East Standings and will need to earn at least more points than the Huskies to secure a pass into the quarterfinals.

- The Minutemen (13-17-2, 7-13-2 HEA) wrap up the regular season this weekend with contests against UConn and Providence. UMass is currently still alive to host an opening round series this season after finishing in last place in each of the last three seasons. The Minutemen could rise as high as seventh in the final Army ROTC Hockey East Standings. Two wins for UMass could mean home ice advantage in the first round of the playoffs.

- UMass played two games against UConn in early December, beating the Huskies in Amherst before suffering a loss on the road. The Minutemen skated twice against the Friars this regular season, splitting two games with them in home-and-home fashion, as well.

- UConn (15-16-2, 11-11-1 HEA) enters its last game of the regular season on a season-best eight-game winning streak. The Huskies own the tie-breaker over Maine and currently hold the final spot for a bye into the quarterfinals.

- After netting two goals in the Huskies' overtime win against BU on Saturday, Spencer Naas (Minnetonka, Minn.) looks to extend a seven-game point streak (5g, 5a) in Thursday's tilt at UMass.

- Having already clinched a bye through the opening round, the Friars remain in contention for a share of the regular season title. The Friars currently sit two points behind first-place Boston College and can tie for first place if Maine sweeps the Eagles this weekend and Northeastern drops at least one point to New Hampshire.

- Northeastern (19-8-5, 13-6-3 HEA) and New Hampshire (10-16-6, 5-12-5 HEA) warp a three-game regular season series in home-and-home fashion in the final weekend of play. The Wildcats paid a trip to Matthews Arena on Feb. 2 and skated to a 1-1 tie against the Huskies thanks to a 40-save performance by netminder Danny Tirone (Trumbull, Conn.). New Hampshire needs two wins and outside help this weekend to claim home-ice advantage in the opening round of the HEA playoffs.

- With a weekend road sweep at Vermont last weekend, Northeastern currently sits in third place in the Army ROTC Hockey East Standings with 29 points. They can claim the regular season title outright with a sweep of New Hampshire and two losses by Boston College.

- Adam Gaudette (Braintree, Mass.) was named the Hockey East Player of the Week after setting a new program standard for career power play goals with 32.

- For the first time in the 2017-18 season, Vermont (9-17-6, 6-11-5 HEA) and Boston University (16-13-3, 11-8-3 HEA) skate against one another at Agganis Arena. The Catamounts currently sit eighth in the league standings, the final home-ice advantage slot for the opening round of the playoffs. The Terriers rank fourth in Hockey East and can lock up the fourth seed in the Hockey East Tournament with two wins this weekend.

- The Terriers' Dante Fabbro (New Westminster, B.C.) and Logan Cockerill (Brighton, Mich.) hit the ice this weekend riding season-best eight-game point streaks, the longest such runs by a Terrier since Clayton Keller rode a 10-game run in the 2016-17 season.

- Vermont road out a seven-game unbeaten streak from Jan. 20 through Feb. 10 (5-0-2) and is now 5-2-2 in its last nine. The stretch was the longest unbeaten streak for the Catamounts this season and within that time frame the team moved up three spots in the Hockey East standings.

- Merrimack (9-18-4, 6-14-2 HEA) and UMass Lowell (16-16-0, 10-12-0 HEA) face off for this first time this season with a home-and-home set to close the regular season. The River Hawks have been undefeated against the Warriors since the 2011-2012 regular season. Both teams remain mathematically alive for home ice in the opening round of the playoffs, while UMass Lowell can secure a bye with two wins and outside help.