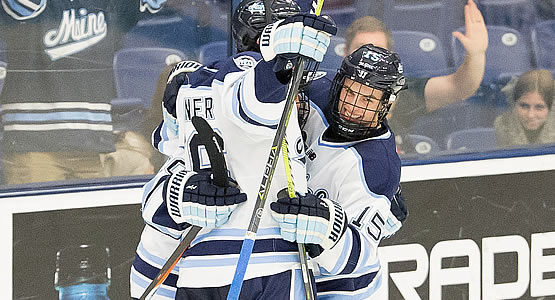 - Providence enters this weekend after a home-and-home with then-#8 Northeastern that saw both games go into overtime. Friday night's game ended in a draw, but rookie forward Greg Printz (Fairfax, Va.) was able to find the back of the net in Saturday night's overtime period to seal the win for the Friars.

- The Catamounts enter the weekend on a three-game winning streak after taking home four points in a two -game set on the road at Merrimack.

- Vermont sophomore Ross Colton (Robbinsville, N.J.) netted the game-winning goal in each of the two games, with Saturday's goal coming in overtime. The forward also tallied two assists on the weekend to earn Hockey East Player of the Week honors and currently leads the team with eighteen points (14g, 4a).

- The Huskies, who are within two points of first place in Hockey East, look to bounce back after going 0-1- 1 in a home-and-home series with then-#10 Providence. Adam Gaudette (Braintree, Mass.) tallied three points in Friday night's draw, including the game-tying goal with less than a minute left to go in regulation.

- New Hampshire treks to Northeastern for their first of three meetings with the Huskies in the month of February.

- The last time that the two teams met was on the ice at Fenway Park during last year's Frozen Fenway, where they played to a 2-2 draw.

- Boston College (13-10-3, 13-5-0 HEA) travels to Hartford on Friday night to take on UConn (11-16-2, 8-11-1 HEA) and will then take on the other Huskies on Monday night in the first game of the Beanpot Tournament. The Eagles look to advance to the Beanpot Championship for the first time since their 1-0 overtime victory over league rival Boston University back in 2016.

- Jerry York's squad is coming off a weekend split with UMass Lowell. Their comeback effort came up short on Friday night as they fell, 3-2, on the road but the Eagles responded Saturday night to walk away with a 5-2 win over the River Hawks. Sophomore forward Graham McPhee (Bethesda, Md.) lead the offensive charge for the Eagles, tallying three goals on the weekend.

- Boston University defenseman Dante Fabbro (New Westminster, B.C.) found the back of the net once and dished out four helpers against the Sun Devils.

- The Terriers will return to TD Garden ice on Tuesday night for the opening round of the Beanpot Tournament, where they will meet Harvard in a rematch of last year's Beanpot Championship game that saw them fall to the Crimson, 6-3.

- Black Bears goaltender Jeremy Swayman (Anchorage, Alaska) earned his second consecutive Hockey East Defensive Player of the Week honors for his efforts in last weekend's series with the Minutemen. The rookie turned away 28 shots each night to help seal the wins. Swayman then picked up Pro Ambitions Rookie of the Month accolades on Thursday.

- Merrimack heads north for the two-game set and looks to bounce back after dropping a two-game series at home to Vermont.

- Senior Brett Seney (London, Ont.) scored the Warriors lone goal on Friday night and dished out an assist in Saturday's game. The forward currently leads all Merrimack players in scoring with a 9-15-24 stat line

- UConn (11-16-2, 8-22-2 HEA) welcomes Boston College on Friday night in the teams' third meeting of the Hockey East regular season. The Eagles have taken the first two games of the series. UConn then heads to Rhode Island for a non-conference match up with Brown.

- The Huskies enter the weekend after taking four points from New Hampshire in a home-and-home series. Adam Karashik (Ridgefield, Conn.) earned Pro Ambitions Rookie of the Week Honors for his play over the weekend. The rookie defenseman dished out an assist on Friday night and tallied two goals on Saturday night, including the game-winner with just under 10 minutes to go in the third period.

- UMass (11-14-1, 5-10-1 HEA) takes on three Hockey East opponents in five days while looking to end a four-game skid. The Minutemen welcome Boston University and Merrimack at home with a road trip to New Hampshire in between.

- Freshman defenseman Mario Ferraro (King City, Ont.) had three assists on the weekend, pushing his point streak to three games. The rookie has recorded nine assists in has last eight games for UMass, leading all HEA players in the category in the month of January.

- Rookie Chris Schutz (Keller, Texas) notched his third goal of the season on Friday night, which proved to be the game-winning tally for the River Hawks.