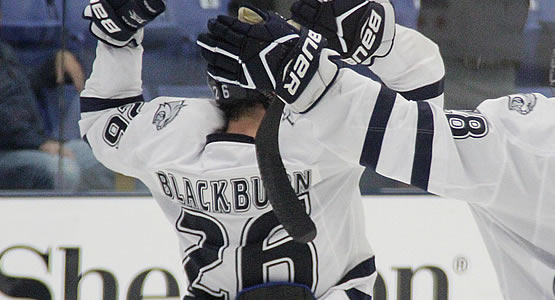 - After a home-and-home series split with New Hampshire last weekend, the Providence Friars (9-6-1, 6-4-1 HEA) break from conference play to host RIT this weekend.

- Erik Foley (Mansfield, Mass.) was named Hockey East Player of the Month for his production across November. In seven games played, Foley led the conference with 11 points (4g, 7a) and posted three multi-point games, including a career-high of four points (2g, 2a) in a single outing on Nov. 18.

- Despite having their eight-game unbeaten streak snapped last weekend, the Eagles (9-6-2, 9-2-0 HEA) retain their hold at the top of the Hockey East standings after a split with the Boston University Terriers (7-9-1, 5-5-1 HEA).

- Boston College's Christopher Grando (Islip, N.Y.) was named the Pro Ambitions Hockey East Rookie of the Month on Tuesday, finishing November with eight points on three goals, five assists, and a plus-8 rating as he helped his team cap off an unbeaten month (7-0-1).

- After a four-point weekend, the Northeastern Huskies (9-5-1, 7-3-0 HEA) moved into the top-10 of the national rankings and sit fourth in Hockey East. Freshman goaltender Cayden Primeau (Voorhees, N.J.) was named Pro Ambitions Rookie of the Week after only allowing three goals on 68 shots during the week, picking up a pair of wins over Merrimack.

- Northeastern and Merrimack clash for the third time this season next Saturday, Dec. 16 The Huskies defeated the Warriors in the first two outings Dec. 1-2, winning each contest, 3-1.

- Both Merrimack and UNH welcome Army West Point to their rinks this season. On the year, Army is 6-2-1 on the road and carries just a 1-5-1 record at home.

- The Minutemen fell at UConn earlier this week in a Tuesday Hockey East matchup, 8-2. It was UMass's first setback in four tries after clipping off three straight wins over Quinnipiac ant UConn. Junior Brett Boeing (Barrington, Ill.) recorded his first career goal in the loss.

- Sophomore forward Ryan Lohin (Chadds Ford, Pa.) leads the River Hawks in scoring with 14 points (5g, 9a) on the season, despite being held off the score sheet in four of his last six games.

- River Hawks netminder Christoffer Hernberg (Espoo, Finland) was named Stop It Goaltending Goaltender of the Month on Tuesday after leading UML to five victories in November, allowing no more than two goals in five of his six starts. He went 5-1-0 on the month, improving to 8-2-0 overall for the 8-7-0 River Hawks.

- Maine (6-7-1, 4-4-1 HEA) is fresh off a three-point conference weekend at home against Vermont. In game two on Saturday, Mitchell Fossier (Alpharetta, Ga./0g,3a), Nolan Vesey (North Reading, Mass./2g,1a) and Patrick Holway (Cohasset, Mass./1g,2a) all had three point performances in a 6-2 victory.

- UConn (7-11-2, 5-7-1 HEA) closes out the first half of the season with a non-conference matchup against Colgate before returning to the ice Dec. 30 at Boston College.

- The Huskies were victorious in a midweek tilt against the Minutemen on Tuesday, an 8-2 win that saw goals from six different players. Senior Jeff Wright (Coquitlam, B.C.) and sophomore Benjamin Freeman (Falmouth, Maine) each had two goals apiece to lift the Huskies into a tie for fourth place in the league standings.

- The Vermont Catamounts (4-10-2, 1-6-2 HEA) are back home after a two-game series on the road in Maine last weekend. Ross Colton (Robbinsville, N.J.) had two goals in the third period to lead the rally to tie the Black Bears, 2-2. Goaltender Stefanos Lekkas (Elburn, Ill.) tied his career-high with 41 saves in the draw.