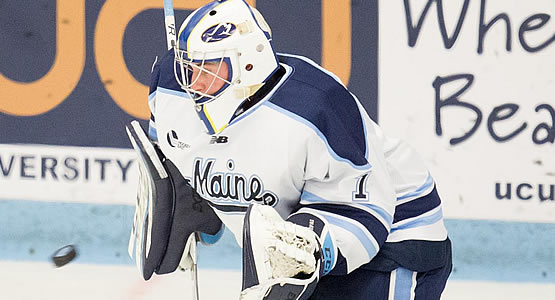 Hockey East Player of the Week Jeremy Swayman of Maine

AROUND HOCKEY EAST: Maine swept a two-game road set at Quinnipiac behind 95 saves from rookie netminder Jeremy Swayman (Anchorage, Alaska). Swayman stopped 50 shots on Friday and followed up with a 45-save performance on Saturday to move into second among all league goaltenders with a .931 save percentage. He stands at 7-3-1 on the year and is unbeaten (4-0-1) in his last five starts. Dating back to November 4, Swayman carries a 6-1-1 record ... UConn earned two key wins behind goaltending from Adam Huska (Zvolen, Slovakia). Huska allowed just three goals in 114:41 of work against Massachusetts and #16 Colgate. Huska is now 5-1-0 in his last six outings ... UMass trounced #19 Union Sunday evening, taking a 2-1 win to improve to 5-2-0 in its last seven. Oliver Chau (Oakville, Ont.) scored his team-leading seventh goal of the year. ... Merrimack skated to a weekend sweep of Army West Point and #13 New Hampshire. Sami Travernier (Morzine, France) earned three points (2g, 1a) in the 2-0-0 weekend for the Warriors while rookie Evan Bell (Livonia, Mich.) recorded the first two points of his collegiate career Sunday in a 4-3 win over the Wildcats ... Boston University and UMass Lowell split a weekend series, as the Terriers' Jordan Greenway (Canton, N.Y.) racked up six points (3g, 3a). The junior forward had four points (3g, 1a) in Saturday's win and also blocked four shots, had 11 shots on goal and a plus-three rating over the two games. The River Hawks' Christoffer Hernberg (Espoo, Finland) picked up his ninth win on the year behind 24 saves Friday ... Providence split a weekend series with RIT, downing the Tigers, 8-3, in game one behind a goal and two assists from Erik Foley (Mansfield, Mass.) but were shut out, 4-0, in game two ... #10 Northeastern toppled #15 Boston College, 5-2, Saturday night, taking its first win at Conte Forum since 2008 thanks in part to Dylan Sikura's (Aurora, Ont.) four power-play points (2g, 2a) ... Vermont took a 2-2 stalemate with Brown on Saturday with key contributions from Tyler Harmon (Ramsey, N.J.), who made 25 saves in his first NCAA start, and Conor O'Neil (Hummelstown, Pa.) who scored midway through the third period to secure the tie. 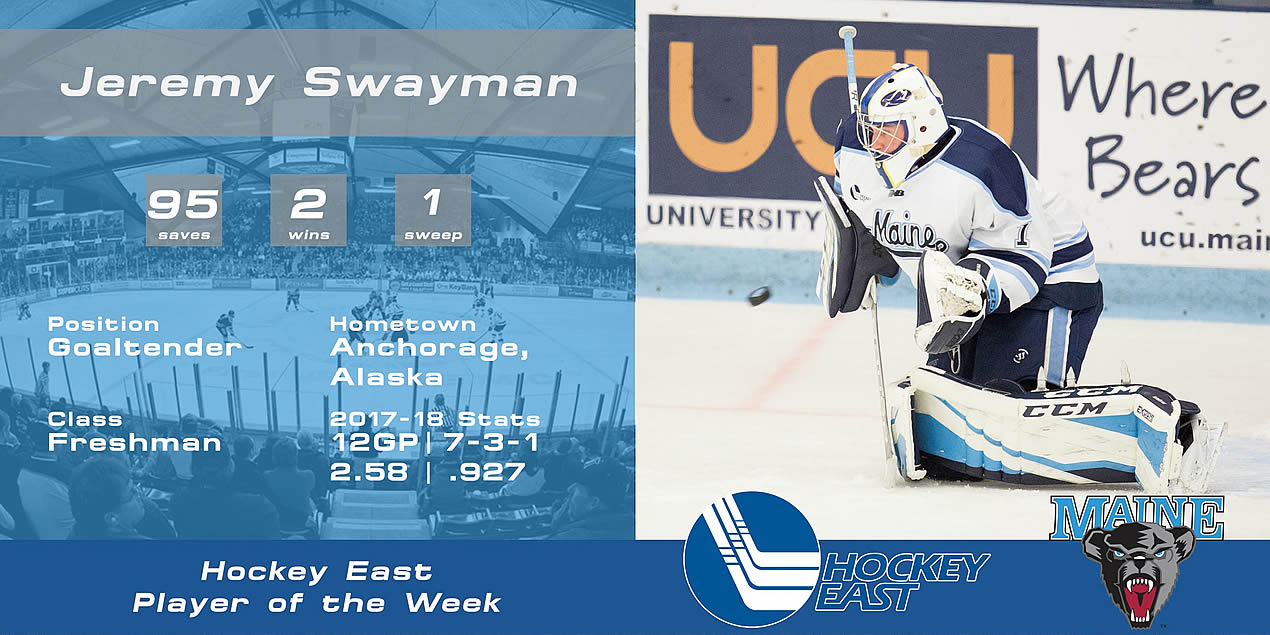 Jeremy Swayman (Anchorage, Alaska) backboned Maine to a sweep of Quinnipiac, making 95 saves on 102 shots to lead all NCAA goaltenders last weekend. His 50-save performance on Friday helped Maine erase a three-goal deficit and take a 7-4 win. 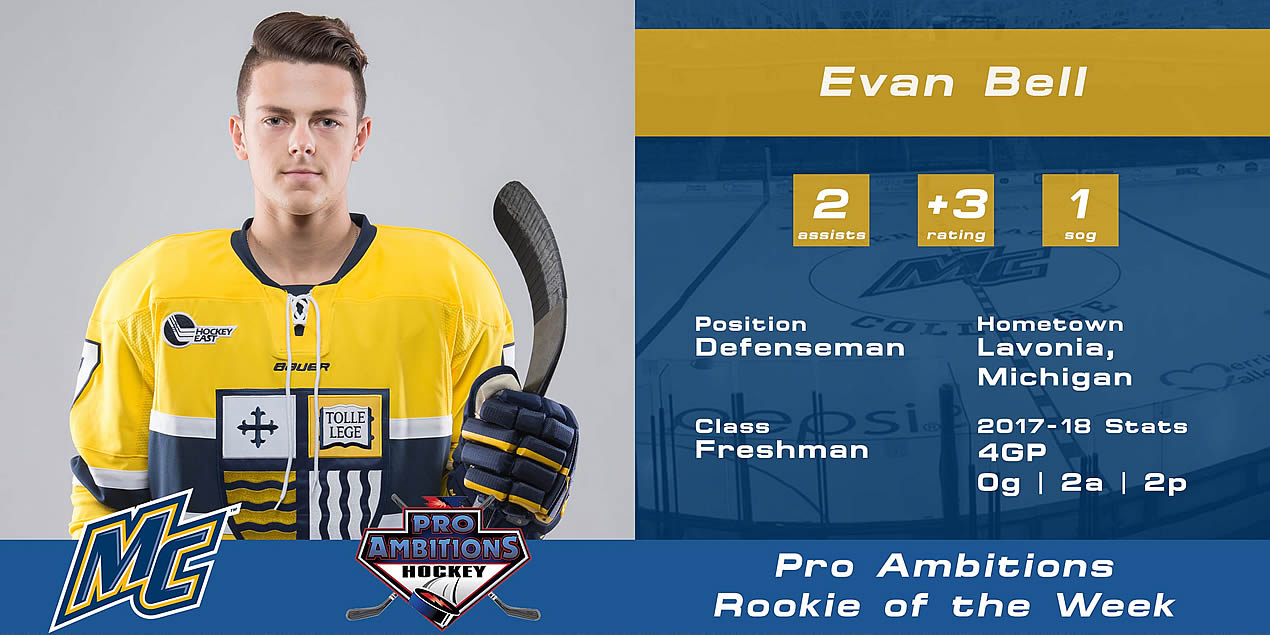 Evan Bell (Livonia, Mich.) recorded the first two points of his collegiate career Sunday in a 4-3 win over #13 New Hampshire. The freshman defenseman dished out two helpers and finished with a plus-three rating in the game to help Merrimack earn a weekend sweep. 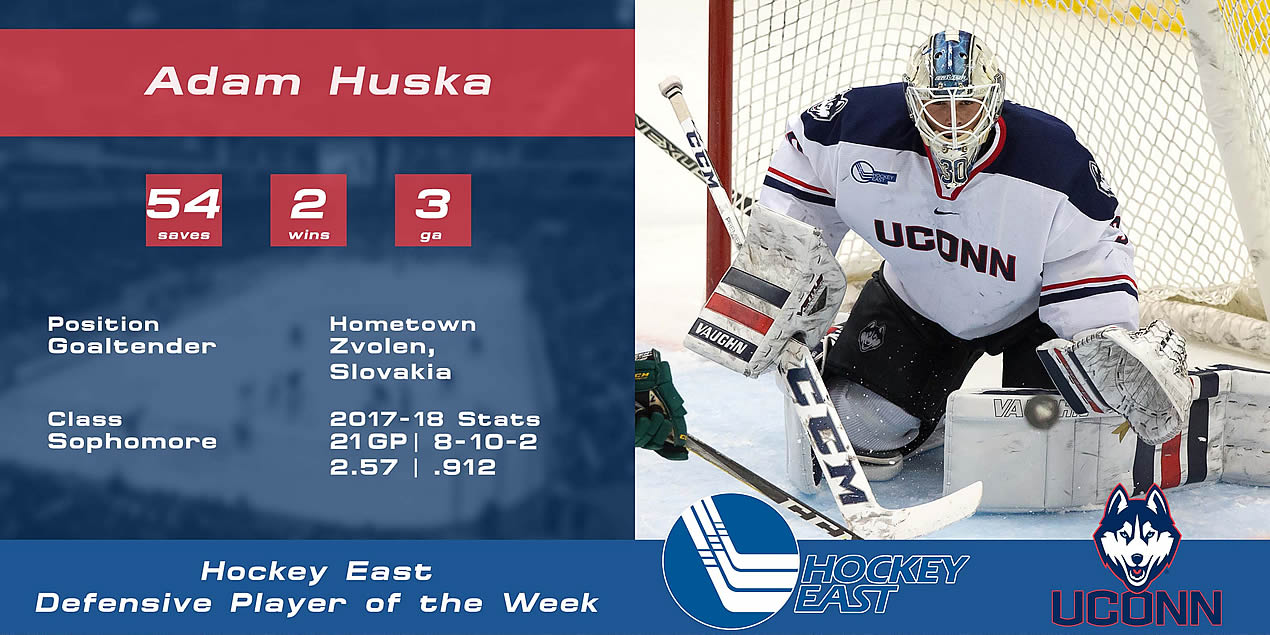 Adam Huska (Zvolen, Slovakia) picked up two wins, earning a 1.57 GAA and .947 save percentage. He stopped a total of 54 shots in the two outings en route to getting his seventh and eighth wins of the year.

Jordan Greenway, BU (Jr., F; Canton, N.Y.) Tallied six points (3g, 3a) in a split with UMass Lowell. He racked up four points (3g, 1a) in Saturday's win. He had four blocked shots, 11 shots on goal and a plus-three rating over the two games.

Cam Crotty, BU (Fr., D; Greely, Ont.) Scored his first NCAA goal and chipped in an assist in the 9-3 win over the River Hawks and also had a helper in Friday's loss.

Eduards Tralmaks, ME (Fr., F; Riga, Latvia) Registered three points (2g, 1a) in a 7-4 win against Quinnipiac on Friday.

Patrick Holway, ME (So., D; Cohasset, Mass.) Led the Black Bears with four points (1g, 3a) in a two-game road sweep of Quinnipiac.

Jared Kolquist, MC (Sr., D; Hermantown, Minn.) Dished out a team-high three assists in two games for Merrimack. All three of his helpers came on the power-play in Friday's win over Army West Point.