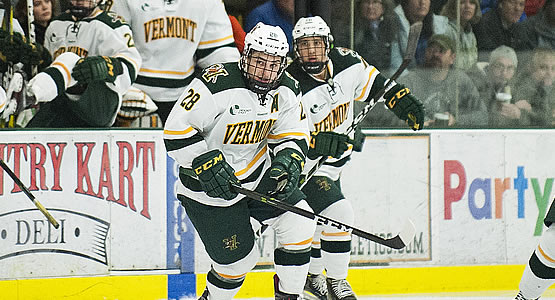 - Providence's (5-4-0, 2-2-0 HEA) Brian Pinho (North Andover, Mass.) and Erik Foley (Mansfield, Mass.) have found the score sheet in past games against the Minutemen. Pinho boasts two goals and six assists in nine career games while Foley has a goal and six assists in six career outings.

- The Terriers secured a win last Friday night, skating past then-#6 Providence, 2-0. Chad Krys (Ridgefield, Conn.) was named the Hockey East Defensive Player of the Week after scoring both goals for his squad while helping goaltender Jake Oettinger (Lakeville, Minn.) make 31 saves to pick up his first shutout of the year.

- Northeastern and Boston University met last Saturday, a 4-1 win for the Huskies. Nolan Stevens (Sea Isle City, N.J.) earned Hockey East Player of the Week accolades after recording his first collegiate hat trick in the outing to help move Northeastern to 3-0-0 in Hockey East play. It is the first time since 2008-09 the Huskies have leapt out to a 3-0-0 pace in league play. The victory also marked the first time since 2008 that the Huskies defeated the Terriers on the road.

- After a 3-0 shutout against Massachusetts last weekend, UNH moved up four spots in the polls this week. Goaltender Danny Tirone (Trumbull, Conn.) posted his eighth career shutout in the win, making 27 saves to keep the Wildcats undefeated in league play (3-0-1).

- UMass Lowell split a road series with the Maine Black Bears last weekend to earn its first conference win of the year. The River Hawks came out on top in game one, earning a 3-2 victory off the stick of senior defenseman Chris Forney (Thief River Falls, Minn.) on the power play in the third period. Ryan Lohin (Chadds Ford, Pa.) and Colin O'Neill (Odenton, Md.) also posted one goal apiece.

- UMass Lowell, currently 1-5-0 in league play, are in the midst of an eight-game run against conference opponents.

- The Eagles will face off against the Catamounts at the Gutterson Fieldhouse for the first time since the 2015-16 season. The teams have played each other 14 times in the past 14 seasons and the Eagles hold an 8-4-2 advantage in that time.

- BC is fresh off a 2-1 win against UConn Tuesday night, vaulting the Eagles into first place in the Hockey East standings (4-1-0 HEA). Sophomore goaltender Ryan Edquist (Lakeville, Minn.) earned his first win of the season in the victory by turning away 27 shots.

- Vermont welcomes Boston College to Burlington after splitting last weekend on the road at UConn. After falling to the Huskies in game one, the Catamounts mounted a comeback in game two with four unanswered goals to earn a 4-2 victory. Jarrid Privitera (Old Tappan, N.J.) and Anthony Petruzelli (Federal Way, Wash.) both registered their first goals of the season in the win.

- Merrimack breaks from Hockey East play with a single game against Bentley on Friday after falling in each game of a home-and-home with Boston College last weekend. Johnathan Kovacevic (Grimsby, Ontario) scored his first goal of the season in game one and notched an assist in Saturday night's contest to extend a point streak to three games, the longest by any Warrior this season.

- UConn welcomes #17 Ohio State for two of its final four non-conference games of the season. In a 2-1 setback at Boston College Tuesday, Jeff Wright (Coquitlam, B.C.) scored the lone goal for the Huskies on a power play, while goaltender Adam Huska (Zvolen, Slovakia) stopped 34 shots in the loss, his second highest total this year.