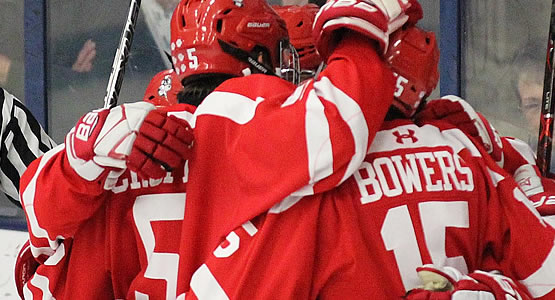 Boston University and Boston College resume the Battle of Comm. Ave this weekend

- The Battle of Comm. Ave celebrates the 275th installment Friday night as Boston College and Boston University renew the Green Line Rivalry at Conte Forum. Last year, the Terriers and the Eagles met four times including in the Hockey East Tournament semifinal, which was the lone game won by Boston College.

- Providence junior forward Erik Foley (Mansfield, Mass.) has posted 11 points in his last six games and led all of Hockey East with seven assists and 11 points during the month of November.

- UNH most recently defeated Yale on the road, 4-0, last Saturday. Senior goaltender Danny Tirone (Trumbull, Conn.) was awarded the Hockey East Defensive Player of the Week after posting his third shutout of the season with 34 saves in the win.

- Northeastern is 5-3-0 in its last eight outings, but just 1-3-0 in its last four after taking four-straight league wins over UMass Lowell and Boston University Oct. 27 - Nov. 10.

- The Huskies' junior Adam Gaudette (Braintree, Mass.) recorded his 100th career point on Tuesday, a helper on Dylan Sikura's (Aurora, Ont.) lone goal for Northeastern in a 4-1 setback. Gaudette is the 52nd player in team history to reach the 100th point mark and the 22nd to do so in three seasons or less.

- Merrimack returns to the ice for the first time since Nov. 17-18, a 0-1-1 home-and-home weekend against Providence. Three Merrimack players enjoyed career-high four-point outings in the 6-6 draw, including Jace Hennig (Port Moody, B.C./1g, 3a), Ludvig Larsson (Malmo, Sweden/2g, 2a) and Jared Kolquist (Hermantown, Minn./1g, 3a).

- Vermont snapped a four-game skid with a 2-1 overtime win over Dartmouth last Saturday, as the Catamounts enter a two-game series at Maine this weekend. Max Kaufman (Rochester, N.Y.) was named the Pro Ambitions Rookie of the Week after he scored the game-winning goal for the Catamounts, his first career game-winner.

- Fellow freshman Alex Esposito (West Haven, Conn.) tallied a goal for Vermont early in the second period, extending his goal-streak to three games, highlighted by the first three markers of his career.

- Maine is back home after participating in the Friendship Four Tournament in Belfast, Northern Ireland during Thanksgiving. After falling to Providence, 3-0, the Black Bears skated past RPI, 4-2, securing third place in the tournament. Four different Black Bears found the back of the net in the contest, including Brendan Robbins (Nashua, N.H.), Nolan Vesey (North Reading, Mass.), Mitchell Fossier (Alpharetta, Ga.), and Tim Doherty (Portsmouth, R.I.).

- UConn defeated then-#12 Northeastern in a weekday tilt at home on Tuesday, 4-1. The win marked the first win for UConn in the all-time series with the Huskies (1-10-0) and lifted UConn into a tie for fifth place in the Hockey East standings with Boston University. With nine conference points, those programs sit just two points back from the second-place Providence Friars (11).

- After making 79 saves and leading his team to a weekend sweep over Quinnipiac last weekend, its first sweep since 2015, UMass sophomore goaltender Ryan Wischow (Green Bay, Wis.) earned Hockey East Player of the Week honors. The backstop logged a 2.00 goals against average and a .952 save percentage over the two outings, improving to 4-1-0 on the year.